A Sorting And Sifting Sort Of Weekend

You may recall that in February, in the midst of a fierce blizzard, a stalwart from Canada Post delivered  a large box of small Napoleonic goodness.   I had a peak inside the box, and was quite excited by the hordes of little chaps therein, but also was rather intimidated, and then got busy, and then put the box away.

Well, this weekend, being in a rather lazy and fitful phase of thesis research, I screwed up my courage to the sticking point and went through all the little boxes crammed in that one big one.  The first job was to pull the little bases away from the sticky tape that my vendor had used to secure them.  He did a wonderful job of securing them for transport, but alas, he didn’t sort them especially diligently.  Some boxes were predominantly French, but usually French, Austrian, and some Russian figures of all types were mixed in together.

Once the figures were all free of tape, the next job was to sort them. 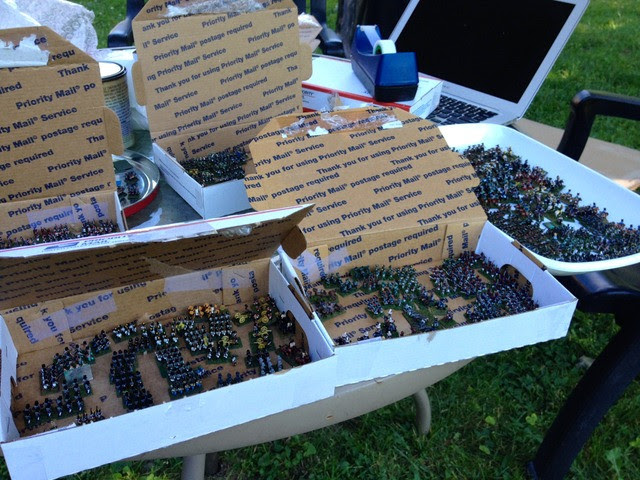 I’m slowly getting better at identifying the troop types, through there were a few types of paint jobs that had me scratching my head.  For example, these fellows based as light infantry, and painted a rather shocking shade of green. At first I thought they were some species of Russian, but on one of the bases on the underside I found the word “Irlandais”, so I am guessing they are supposed to be Napoleon’s Irish Regiment, which were, as far as I can tell, light infantry, but perhaps not as numerous as the 20+ figures in this collection suggest.  Well, fair enough, we all have our pet units.

The big chore will be basing them, which requires careful sorting and squinting to sort them all by uniform type (especially taxing with the Austrians, where many figures are all white with just tiny blobs of facing at collar and cuff.   I am currently cutting bases out of MDF, but with so many, I suspect a bulk order to Warbases might be the trick.   Currently I am using the 60mm by 30mm bases called for in the Polemos rules, one base for GdD and two pushed together for the larger formations in MdE.   The other rules set I’m looking at, Too Fat Lardies’ Le Feu Sacre, doesn’t seem that particular as to base size as long as it’s consistent.  As for basing the infantry, I am considering putting the marching figures in column and the advancing figures in line, but seeing as Polemos doesn’t seem interested in actual formations, I may put them all in line and just orient the bases with a 90 degree turn to indicate column.  Any suggestions? 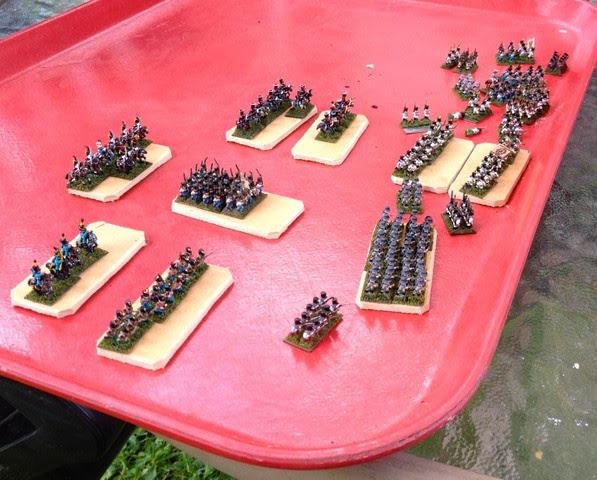 Blessings to your die rolls and brushes!