With My Painting Padawan

One of the advantages of being back in eastern Canada is that I have the opportunity to pick up with old friends, including my buddy Kevin from my ACW reenacting days with the Columbia Rifles.   The CR was an authentically-minded group of living history buffs that Kevin and some friends founded in the late 1990s, and they were kind enough to take me in when I stupidly thought that lying on the cold ground wrapped only in a period correct natural fibre blanket would be fun.   Actually, it was kinda fun at the time.

Kevin and his lovely wife Maureen soon became fast friends and seven years ago they adopted a lovely chap from Guatemala whom they named Brendan.  I had the honour of becoming his godfather but hadn't seen him or his parents for the last five years.   When Kevin and Maureen invited us down to Buffalo, NY for the Labour Day weekend, I was told that Brendan really wanted to paint Zouaves with me.  How could I resist?

Here we are last Sunday.  Brendan quickly picked up some basic principles such as the importance of figure prep, a quick undercoat, block painting and using a palette for his paints. 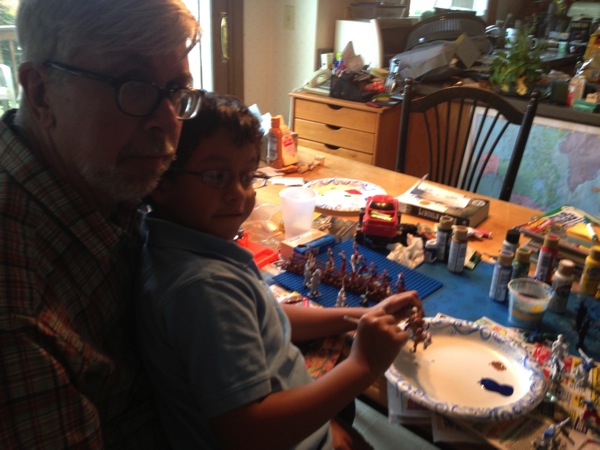 Here are some of Brendan's Zouaves, painted an illustration from Dad's book of Don Troiani prints of the 5th New York at Gaines' Mill. 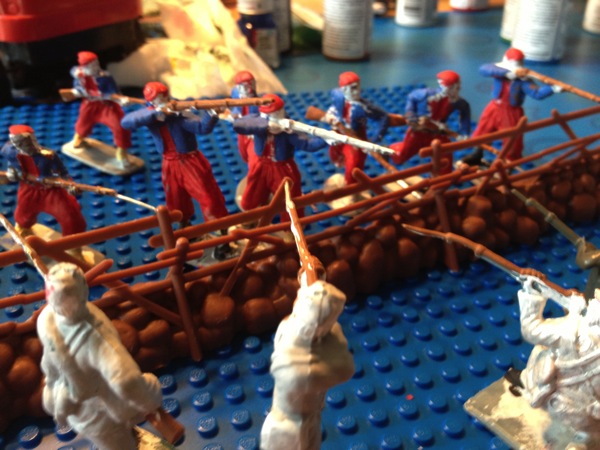 A desperate battle at Lego Farm!   As I was leaving, Brendan was mixing up some flesh tones for his fellows, and was going to try mixing a dark gray for his rebs.   I expect great things of young Brendan and hope to show off more of his work here in the future.