Canadian History Is Not Boring! Comic Operaish Yes, At Times, But Not Boring

There is a school of thought that Canadian history is dull, a debate which is conveniently summarized here by Kate Beaton.  Consider the Battle of Ridgeway as an example of how Canadian history is actually quite exciting.  On the one hand, a bunch of Irish-Americans nationalist  yobbos, many of whom had not received their fill of the horrors of the American Civil War, and who wanted to stick it to John Bull by having a go at Canada (which is rather like getting revenge on your big, frightening neighbour by kicking his little dog tied up in his front yard).  On the other hand, you have the Canadian militia, made up of local farmers and University of Toronto students who got to dress up in Gilbert and Sullivan style uniforms, go fight in a battle, and get a cheesy monument erected in honour of those unfortunate enough to get shot. 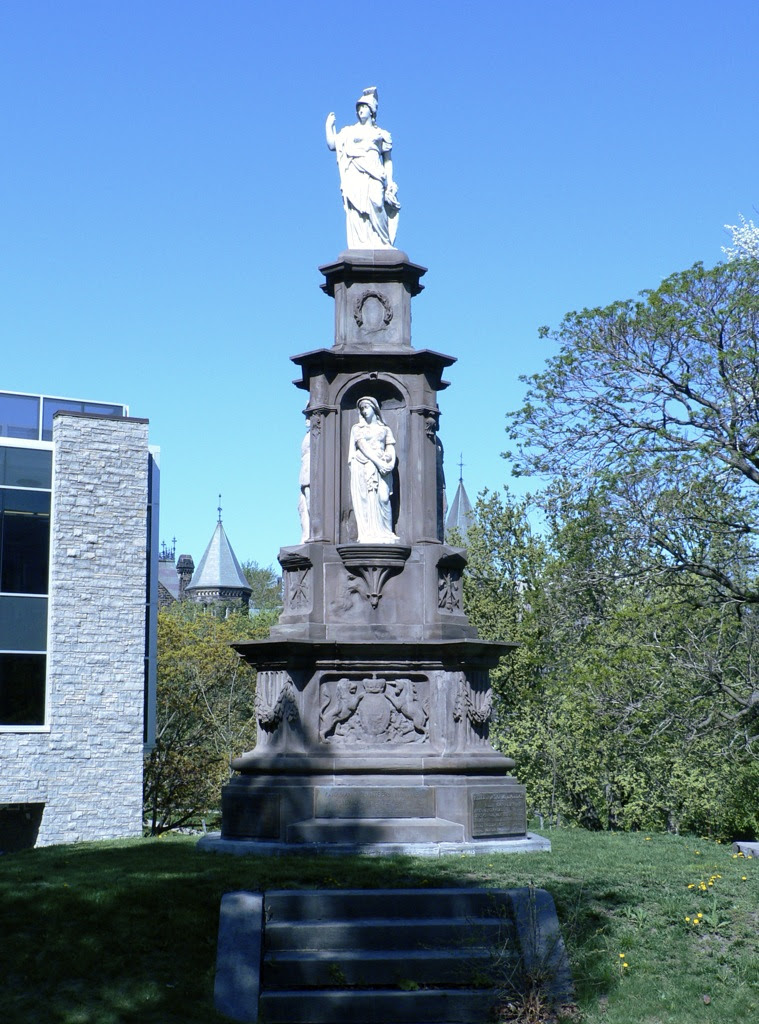 You have to admit, that is a much more impressive way to go that choking on your vomit at a weekend frat kegger, but I digress.

Yesterday much of the brain trust and secret society behind SW Ontario's Hot Lead Gaming Convention assembled to celebrate the fiftieth birthday of one of our own, Postman Pete, or WO Garnham as some are unfortunate enough to have to call him.   Among the day's events was a 28mm battle of Ridgeway by Keith, who had brought an impressive assortment of Fenians, looking suspiciously like Perry Bros ACW infantry in greenish uniforms.  Opposing them were the Canadians, stout chaps in gorgeous red uniforms like this fine fellow. I believe that the Canadian minis are a mix of Empress Victorians and Foundry from their Indian Mutiny range, and that some were painted by James Manto, but I will let others confirm that.  Suffice it to say, they looked good.

Here is the table provided by Postman Pete, with the Canadian side prepared to defend the stream, with their one gun guarding the bridge in the centre.  Our two better units are posted forward, while our less effective militia units are in reserve, but surely those Irish rebel scum won't get as far as the second line of fences! 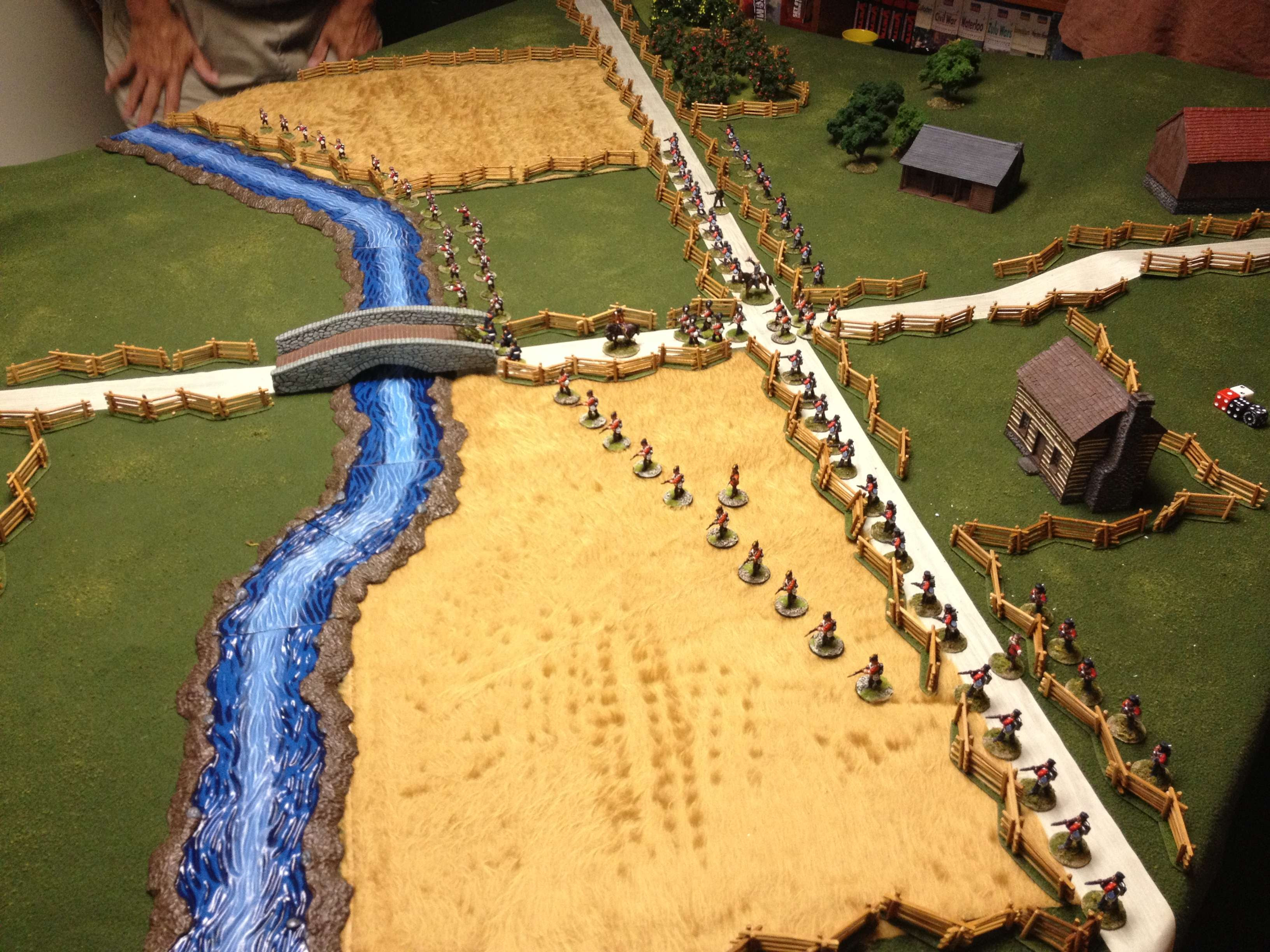 The Fenian side of the table, showing the Fenian dispositions.  Spirited demonstrations by Rico (Fenian right, Cdn left) and by Patrick (Fenian left, our right) will try to pin the flanks while the main force under James and Brian will aim to pierce the centre. 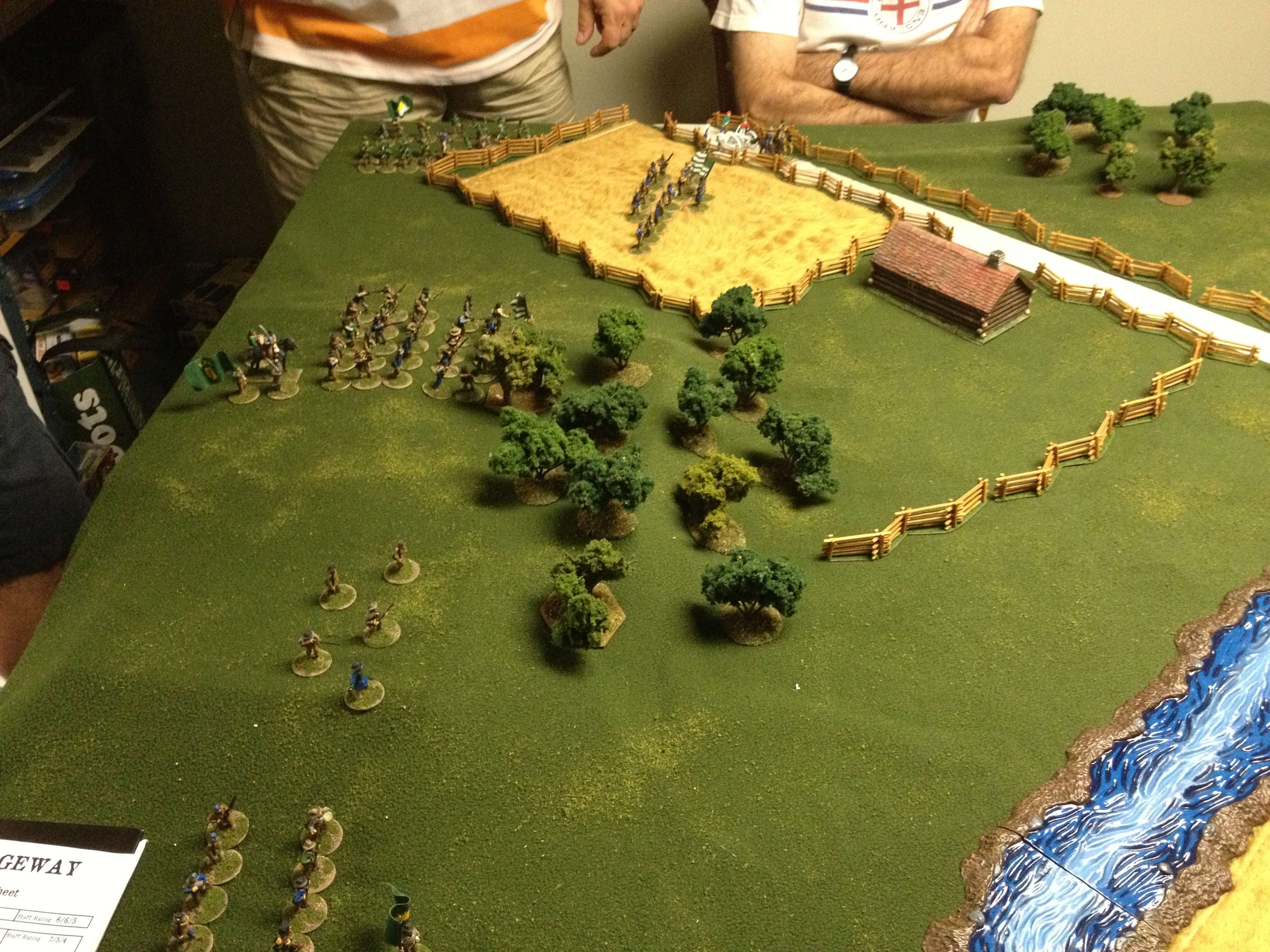 Having introduced the armies, I should say that the rules we used were Black Powder (my first time playing them) with Keith as game master.

On the Canadian left, defenders shake out into skirmish and move forward to check Rico's push on our left flank.  The redcoats will soon rethink this policy and fall back on their supports. 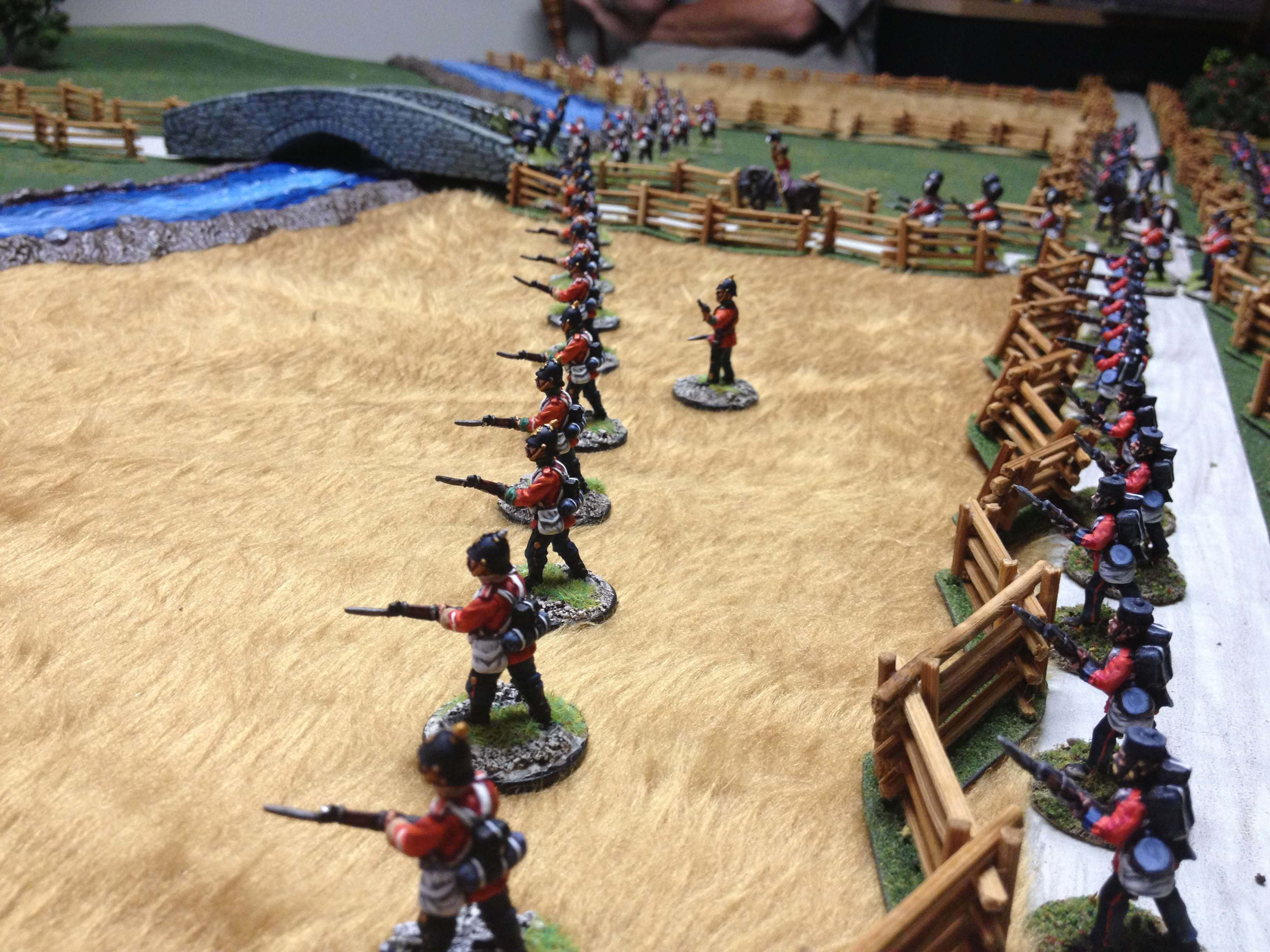 Rico's gobshites crash into Postman Pete's militia and a fierce punch up along the fenceline begins.  This melee will rage for most of the battle. 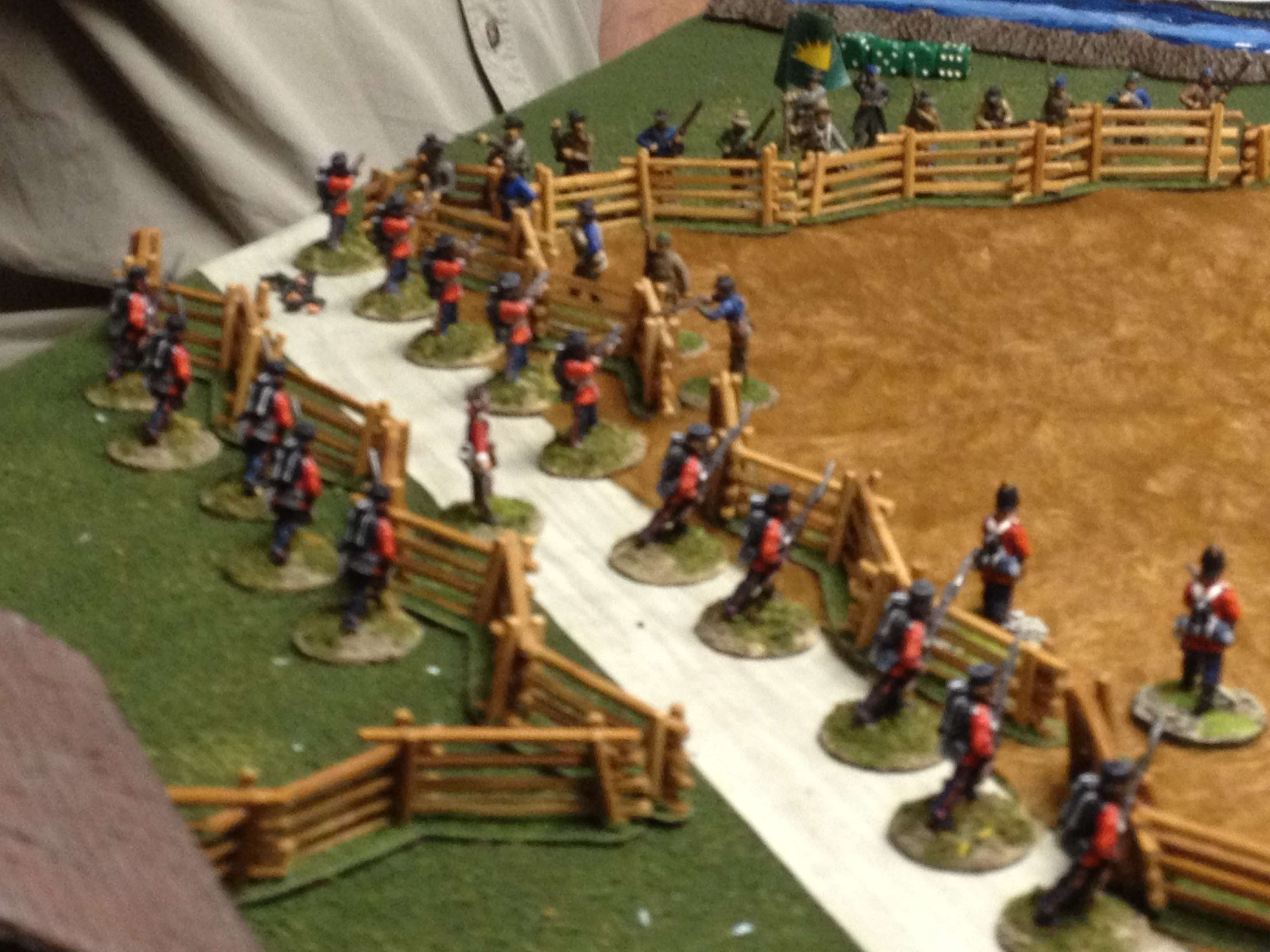 On our right, Fenian Patrick watches in satisfaction as his yobbos sully Ontario's fair stream with their dirty brogues and tear into Mikey's militiamen, who had taken the worst of the musketry so far and were beginning to falter.  As the Cdn CinC, I soon had a lot to worry me. 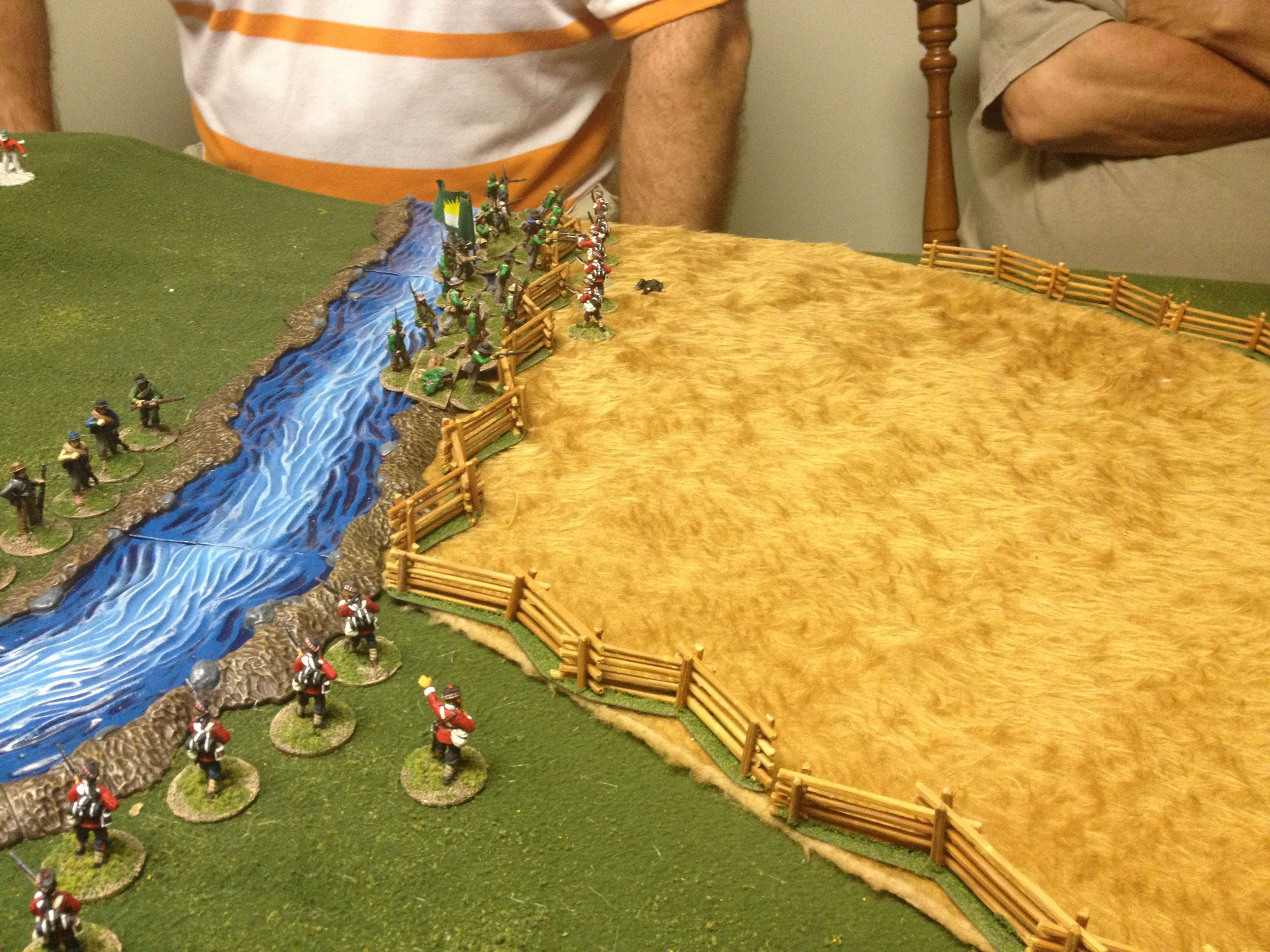 My chief worry was in the centre, where Brian massed an entire battalion, but paused longer than he wished while he tried to get a good orders roll to sort them into a column of companies for the assault over the bridge.  This gave my gunners time to do some damage and disorder, but I had trouble getting my infantry supports to shift over behind them.  I was hoping I could withdraw the gun and plug the bridge with infantry. 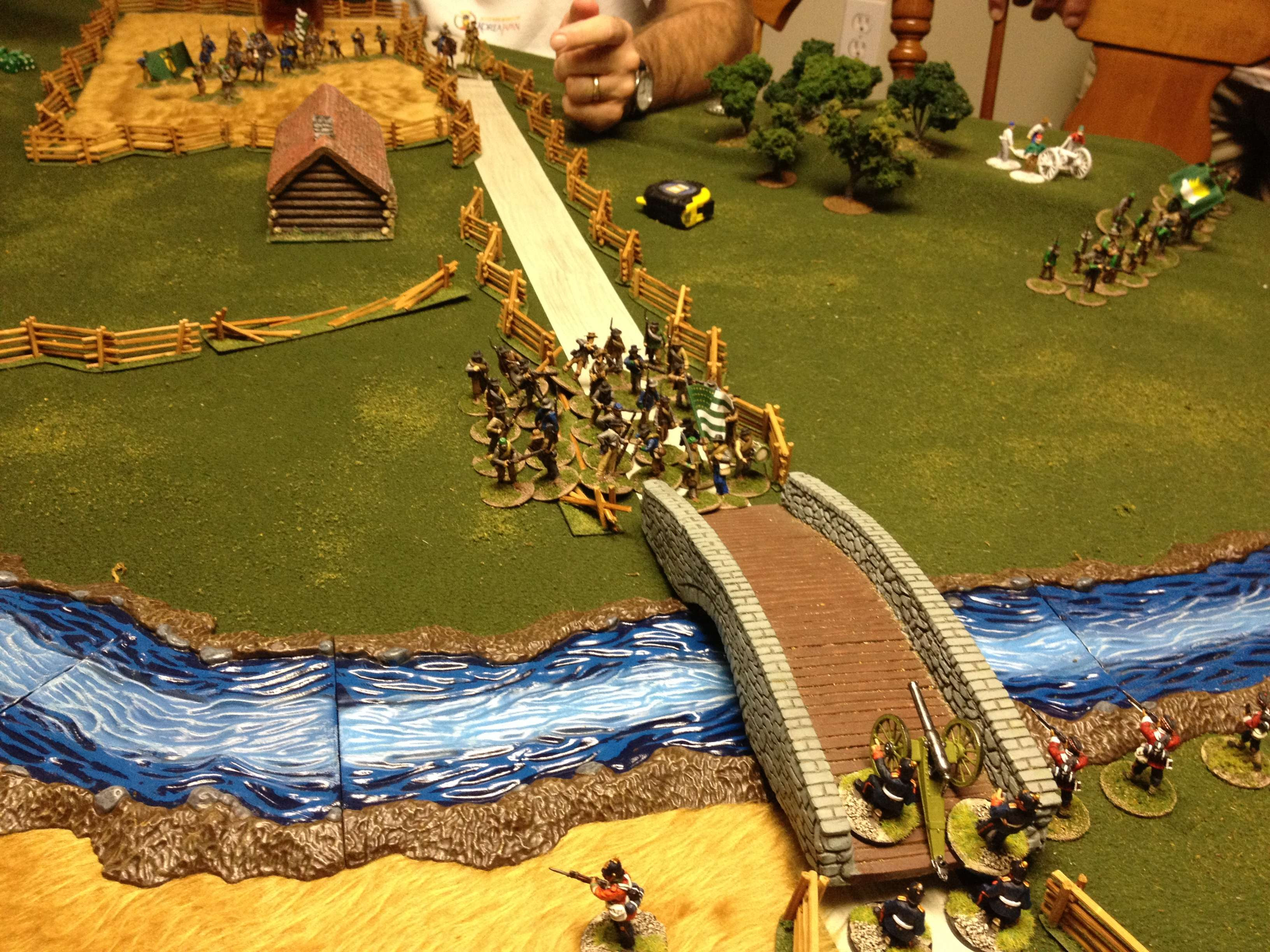 Alas, it was not to be.  The Fenians charged, the gunners panicked and fired their double shotted grape high, and were cut down.  I did manage to get several companies of redcoats to plug the gap, but their die rolls weren't much better.  There was much Fenian mocking of the cool bearskins my lads were wearing, but as a gentleman soldier scholar knows, chicks love bearskins. 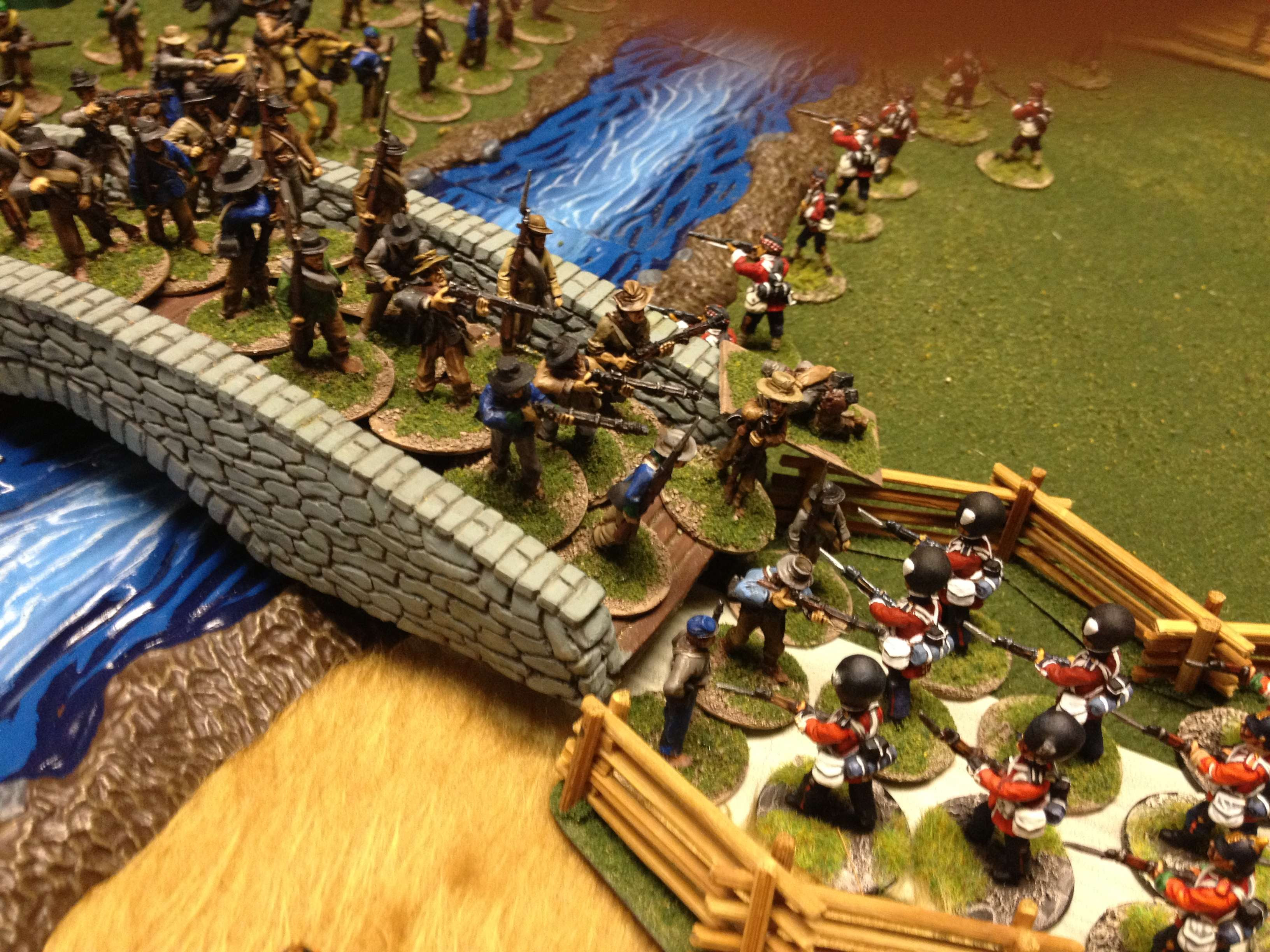 After a few pokes with  bayonets, the bearskins remember that they have a big varsity game tomorrow, and skedaddle.  The mass of the Fenians break through the centre, shrugging off Canadian counter attacks, while James pushes some of his boys over the stream against poor Mikey's last survivors from his fight downstream with Patrick. 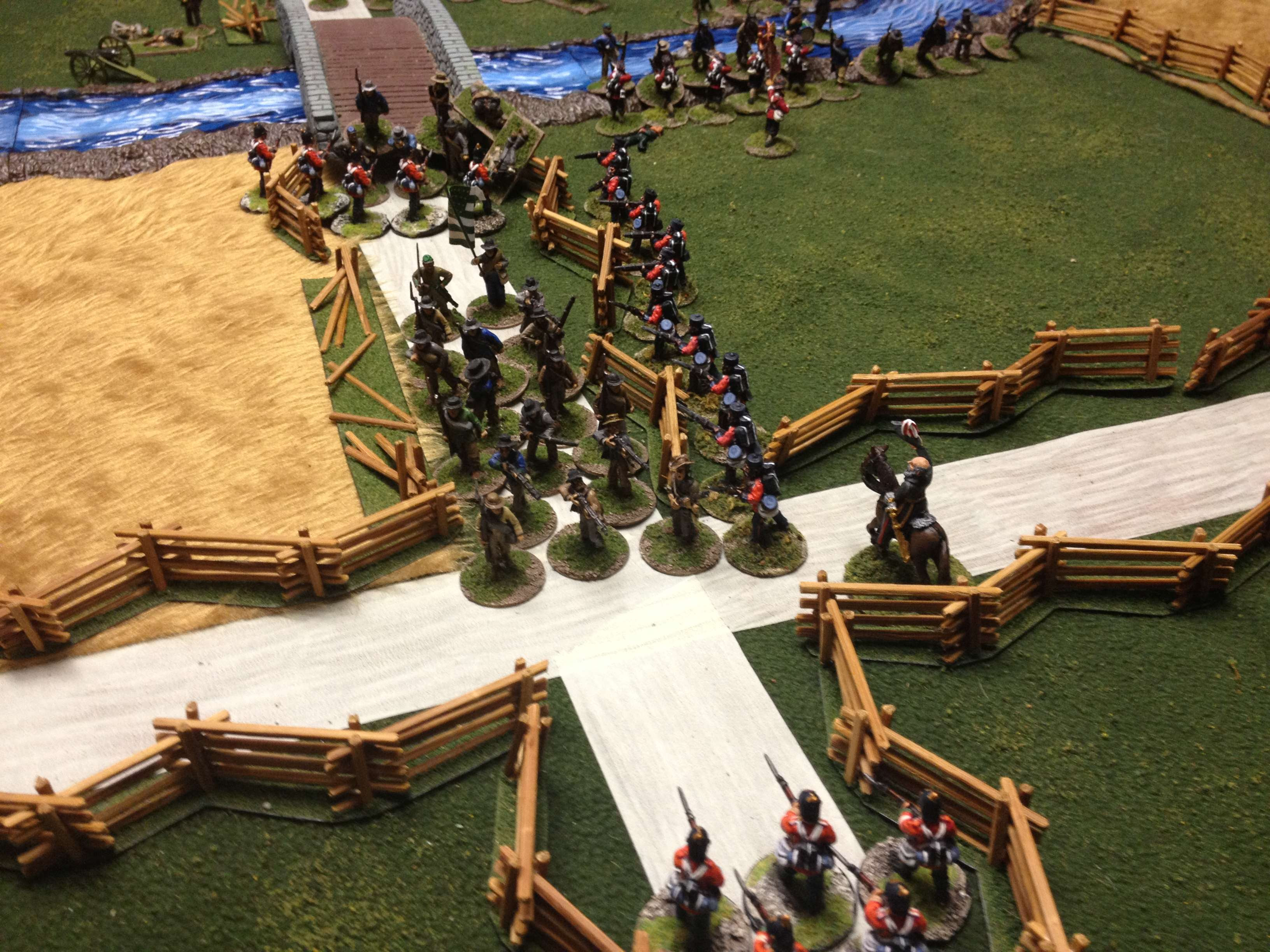 On our right, Patrick's Fenians have overrun Mikey's lads and pitched into our second and last line of defence.  Barry's militiamen try to hold at the apple orchard but quickly decide that Ontario has more than enough fruit to share, and they fade away.  The pressure on Barry's unit prevents him from shifting enough forces to check James and Brian in the centre.

The final view of Fenian victory. 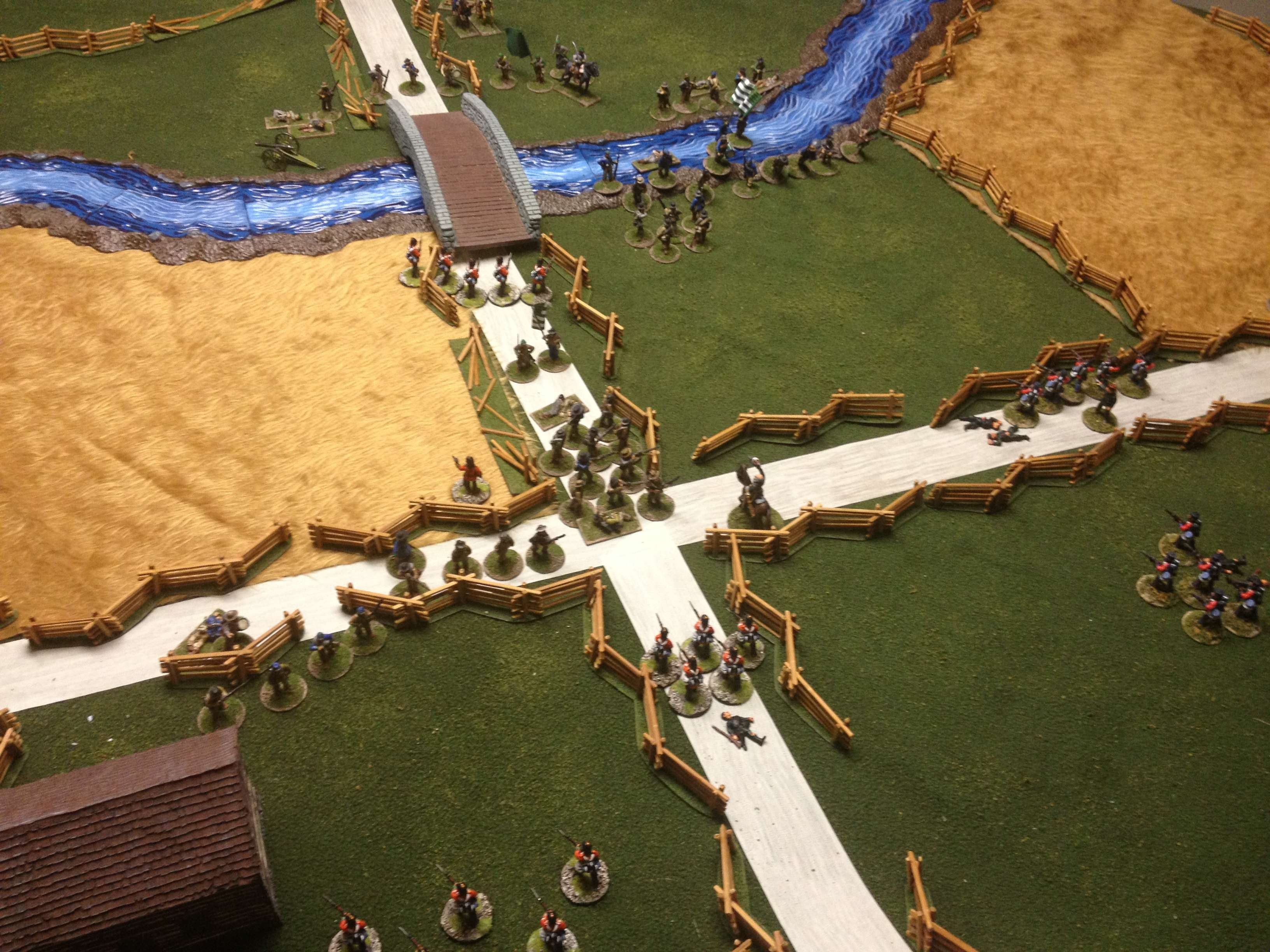 The Canadians are rolled back everywhere and have done a fraction of the damage that was inflicted on them.   There will be much mourning among the belles of Toronto, and a lot of lads with excellent excuses for late term papers.  The cry among the Fenians was "On to Hamilton!", but in real life, after winning at Ridgeway but discovering that the Canadians did not welcome their visit, the Fenians decided enough was enough and went home before the British Army showed up.

All told, a very pleasant game with some terrific looking figures and with a very unusual "Redcoats in the American Civil War" feel to it.  The rest of the day was spent in sillier but equally amusing pursuits.  So happy birthday Postman Pete and thanks for your hospitality.