The Sack and Cleansing of St. Mikhail's: A Maurice After Action Report

My mate James dropped by last Wednesday to christen the Mad Padre's Wargames Chapel. We both have an interest in Sam Mustafa's Seven Years War rules, Maurice, and since I just happened to acquire a copy of the rules and spiffy cards, we broke out my 28mm Russian and Turks and gave them a go. A simple set up, but I have a thing about putting churches on my tabletop, so this battle would centre on my fine Faller church model, St. Mikhail's, which happened to be in the path of a Turkish raiding force.

Here James surveys his Russian army, drawn up to defend the borders against the Ottoman hordes.

My Turks in array of battle. Crap light cavalry on the flanks, my jannissaries and spahi heavy cavalry in the centre, with the infamous love slaves in the rear, as a sort of disco version of the Imperial Guard. I only had two guns against the might of the Russian artillery, but felt that elan and sharp pointy things could prevail.

Stanley the Cat auditions for the role of Russian sub-commander, though sadly, his attention span wasn't quite up to the challenge. A helpful chap while he lasted, though. 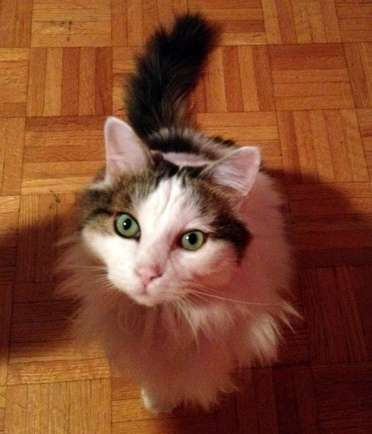 James advances his pandours and five regiments of regulars as one force. James quickly showed that he grasped the idea of combining and maneuvering multiple units in one force, a force in Maurice being defined as homogeneous (all foot or cavalry, all regular or irregular - we opted to count the pandours as regulars for this game.

I took the opposite tack (which proved to be disastrously wrong) and deployed most of my units individually rather than as forces. Here a unit of my crap light cavalry on my right moves forward to lurk in a copse of trees, hoping to pounce on some unwary Russians. 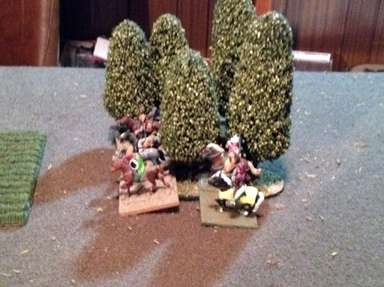 I try to grasp this Force thing. Two of my crap irregular infantry units make a rush for St. Mikhail's, with visions of gold chalices and loose nuns in their sordd heads. 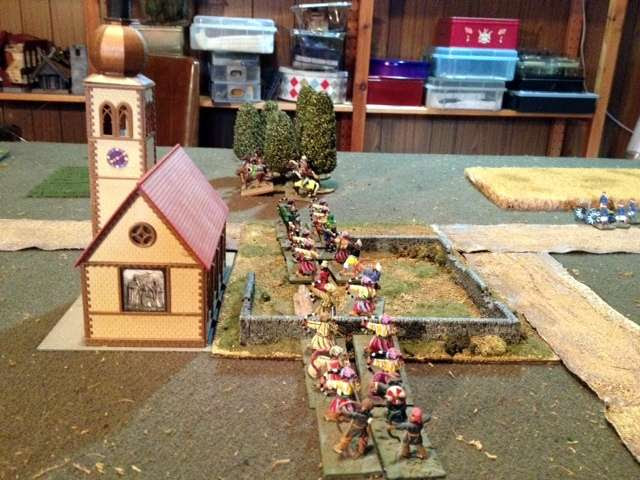 James combines two of his guns on his right and very unkindly begins pounding my irregulars as they try to go to church.

Too late, the Turks break into St. Mikhail's and begin looting. The church is soon in flames. 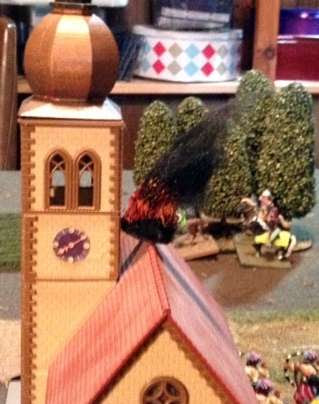 Emboldened by my church ransacking, and hoping to stop James' advancing infantry from breaking up the party in the nave, my crap cavalry rush out of their woods and fall on one of the Russian regiments. However, as we discovered, this is Maurice, and in Maurice, infantry are pretty robust when hit from the front by cavalry. In fact, Sam M even has a little paragraph in his rules, saying that "This is not Napoleonic cavalry; it does not have much chance of breaking a line of regular infantry from the front". I didn't read that paragraph in advance, and so my horsemen were treated rather roughly by the Czar's lads. 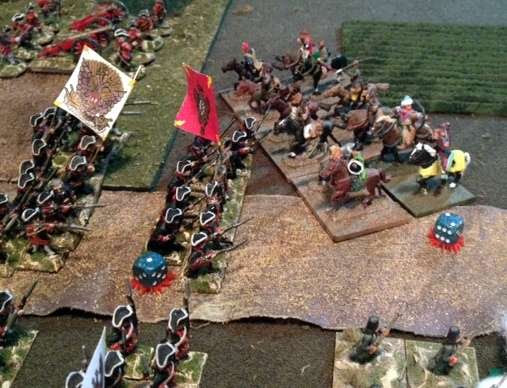 With my scurvy horse cleared out of the way, the battle for the church now began in earnest. The Russian force, a whole brigade, surged forward, while my lads threw candlesticks and burning nuns down on them. At this point, James and I began to appreciate one of the nuances of Maurice, the Volley phase. Once units are in either small arms or cannister range, the phasing player has the option to declare a volley phase, which given that I was outnumbered by three regular units in line against two irregulars, gave James the advantage. I soon realized that in my turn I had best not declare a volley phase, hopefully forcing James to go in with the bayonet. This tactic worked for a time, as using the Rally Order and, once, a lucky card, was able to rally my church ransackers several times when they were almost on the point of disintegrating at 4+ disruptions (Maurice uses disruption levels rather than figures removed as casualties to measure a unit's cohesiveness and closeness to breaking).

My force of three jannisary regiments moves forward to the relief of their unruly comrades in the church, taking stick from the Russian guns as they do. Sadly, it will be too little, too late. 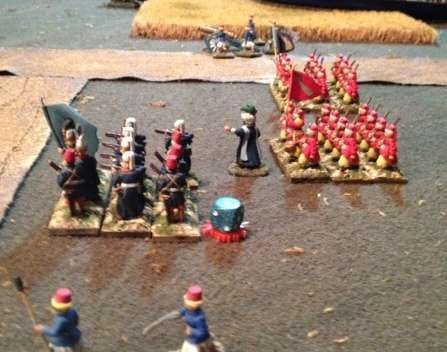 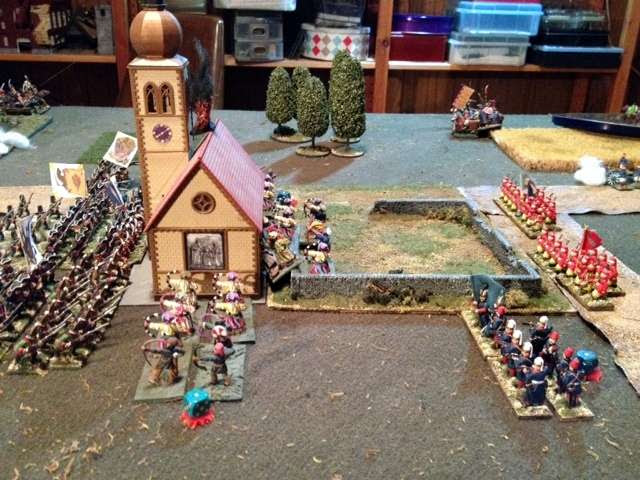 Borrowing a tactic from Dino de Laurentis' film Waterloo, we hired a helicopter to record the final cinematic units, as James' elite grenadiers and two of his regular units charge into the burning church, evicting the sacreligious heathen, and extinguishing nuns and icons. Losing two more of my units took me to the breaking point for my army, so the battle went to James and Mother Russia. 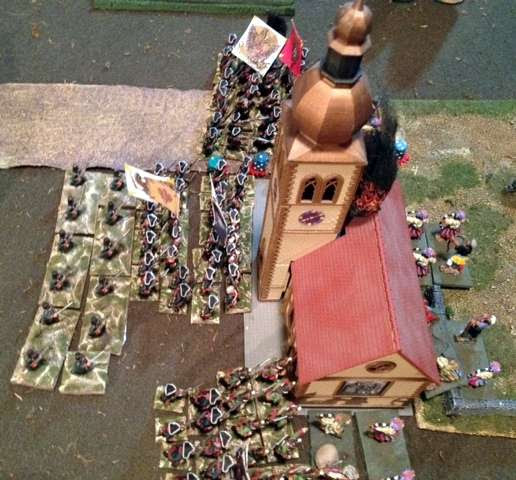 So that was our forst head to head game of Maurice and I have to say that we were both quite impressed. The use of cards to interrupt your opponent's plans and to generally annoy him is entertaining but doesn't feel too gamey. At the heart of the game is good linear tactics, and victory goes to the player who can maximise the effectiveness of his units by grouping them into several powerful forces, rather than scattering them about the table as I did. I also learned again what a fragile army the Turks can be. I need to paint more jannisaries and artillery to give them a stronger regular core to allow them the chance of an army morale similar to the Russians (starting morale is based mostly on numbers of guns and regular horse and foot units). To be fair, we just dumped a lot of figures on the table. It would have been more interesting for the Turks we purchased units from a set number of points. We will definitely Maurice it up again soon, and try some of the advanced rules. Highly recommended.