Not that I need a new period, really, but Napoleonics were some of the first figures I ever painted (early 1970s Minifigs that my older brother Alex bought for me since my youthful allowance wouldn't cover it), and then in high school SPI's epic and quite beautiful monster boarsgame Qellington's Victory was a passion for some time. There was also a brief foray into GDW's early 1980s System 7 cardboard counter substitute for miniatures.
Lately I've been thinking that 6mm might be the scale for me to try Napoleonics in an affordable and feasible way. But then I realized how little I knew of the period, other than the 1815 Waterloo campaign, so I thought that some basic reading might be in order first.

Last week an intriguing and quite novel bag was left on my front porch. 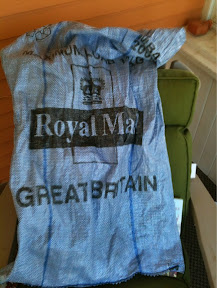 Aha, I said, that must be my order from Naval and Military Press in the UK, and sure enough it was. 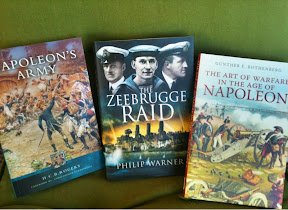 Inside was a copy of Philip Warner's account of the Zeebrugge Raid, which NMP was flogging, appropriately, as its St. George's Day special. No interest in gaming that action, but I remember reading about it in my grandfather's set of Times Illustrated History of the Great War, and remembered Zeebrugge as a desperate and gallant affair (most VCs in a single day since Rorke's Drift) so it seemed like a great piece of summer reading.

The two Nap books are H.C.B. Roger's Napoleon's Army (1974) and Gunther E. Rothenberg's Art of War in the Age of Napoleon (2000). Of the two, I gather that Rothenberg was the professional academic while Rogers was a career soldier turned amateur historian. No matter, I am just looking for some good Napoleonic primers at this point.

Anyone out there have any thoughts on these two books? Any other recommendations on essential Napoleonic reading for the beginner?

- Posted using BlogPress from my iPhone