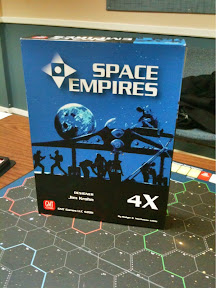 Thursday night at the local boardgames club introduced me to Space Empires, a game designed by Jim Krohn and published recently (2011) by GMT. I had a grand time.

SE combines many tried and true gaming concepts: exploration, colonization and expansion, research and development, fleet production. I found nothing terribly new here, but the whole package is elegant, easy to master and good fun.

We had four players, the maximum number allowed, and while we didn't finish it within three hours, we had a decent result. I had to choose what research paths I would take to develop my fleet, and was helped by the fact that other players started fighting first, so I could see what technologies they had chosen and were using on each other. One nice feature of the game is that as new technologies come on line, subsequent versions of ships produced have those advantages. So, the destroyers you encountered on turn 3 will probably be not nearly as capable and scary as the destroyers you meet on turn 7. It helps to keep one's eyes open to track what other players are doing.

A very clever game. The map is attractive, with oversize stellar hexes to accommodate various smaller counters representing ships, bases, merchant fleets, etc. Lots of replayability value since the various star systems that one explores and discovers are randomized each game. I would happily play this again.

Posted using BlogPress from my iPhone