The latest unit of my 28mm SYW project is complete and is mustered into Prussian service.    These are Front Rank Prussian Fusiliers, and may have been one of the last shipments made by the now retired owners of that company before it was acquired by Gripping Beast.  I’m very pleased to see that this venerable product line is now available again on the GB website.  While most of my SYW figures in recent memory have been purchased from the extensive Foundry line, I began the collection in the 1990s with Front Rank figures, ordered from the legendary and now defunct Emperor’s Headquarters in Chicago.

These figures came as a Front Rank battalion back, and while I should have ordered a few more of the chaps with muskets, I think it’s fine and realistic to have units of slightly different sizes on the wargames table.  I chose the paint scheme for the Wied Fusiliers, a regiment which takes its name from its commander, who rejoiced in the name of Franz Carl Ludwig Count von Wied zu Neuwied.   According to the Kronoskaf website, the regiment, which had existed since 1716 as “ Erbprinz”, was purchased outright by Frederick II in 1741 from the Duchy of Wurtemberg, which obviously needed the cash for pressing reasons, and became Infantry Regiment 41. 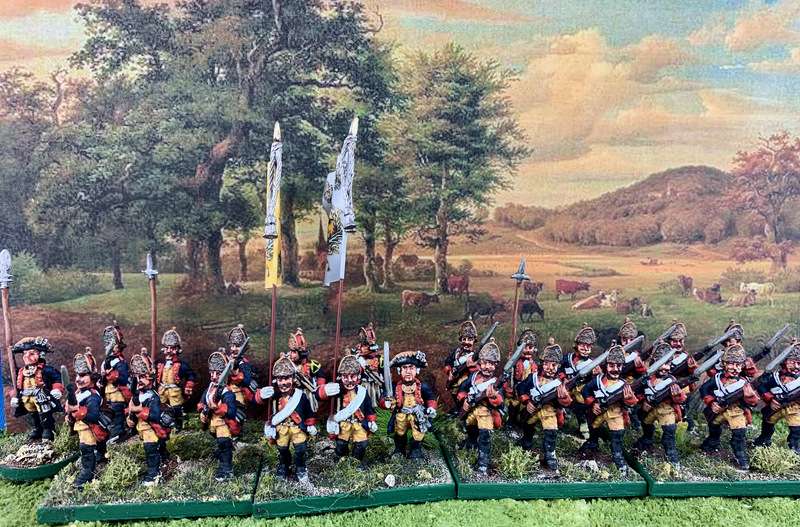 The unit is painted in Foundry paints using their tribute-tone system on a black undercoat, which I’m slowly becoming more comfortable with.   I chose Foundry’s Ochre paints for their trousers and waistcoats, which to me looks very Prussian, though it was noted to me on social media that Von Wied’s troops wore white trousers.   Kronoskaf notes that as of 1756 the trousers were of a yellowish hue, so I think I’m on firm ground, and honestly, in games where these figures could be any Prussian fusilier unit, does it really matter?

Likewise I was told that the flags should be reversed, as the Colonel’s flag should be on , and I will remember that when they pop off and need to be reglued.  Someone else told me the flagpoles were two tall.   Whatever, they look good to me.  The flags are from Adolfo Ramos, who in my opinion does stellar work. 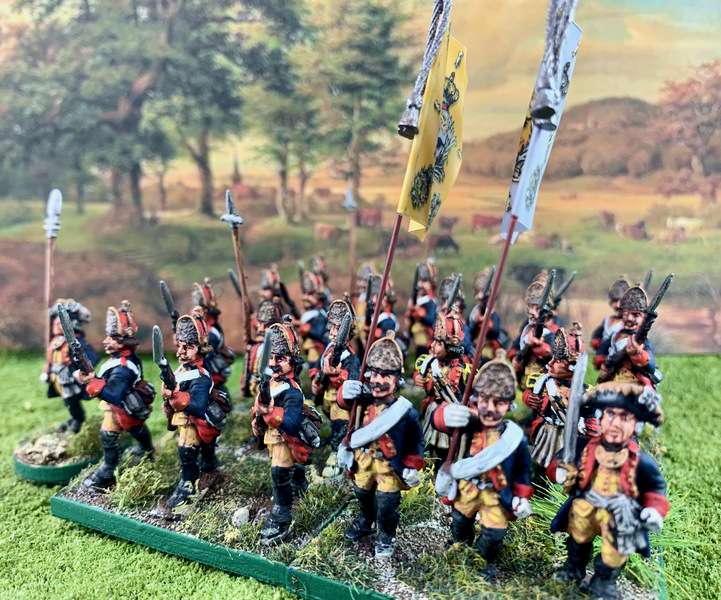 That the troops with muskets are all in one pose gives this unit an old school look, which I rather like, and seems in keeping with the Prussian mode of drill. 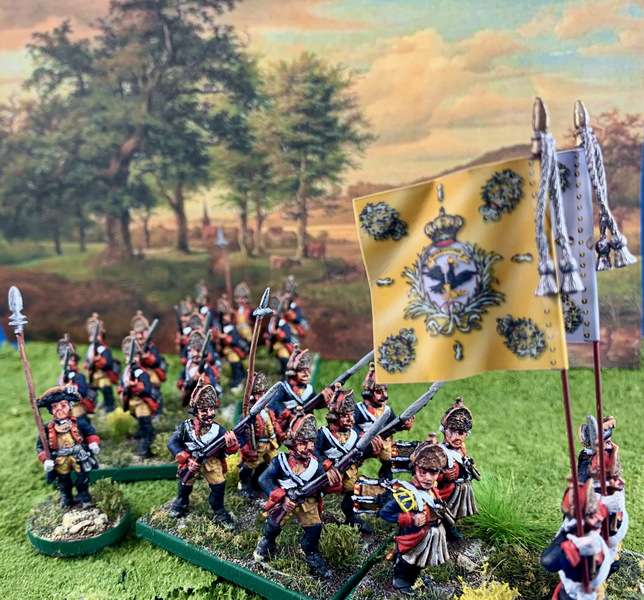 I am currently working on a regiment of SYW Prussian dragoons, so soon I should have a modest sized Prussian brigade ready for the table.  Cheers and thanks for looking.