A Lard Day in the Frozen North

Saturday, Nov 27th, may have been the first miniatures gaming day ever organized in Canuckistan to celebrate Too Fat Lardies games.   The event was the brainchild of Chris Robinson (@LegendaryNoize, www.twothresixmm.blogspot.com) and Barnaby Ore (Hamilton Tabletop Gaming Society) for pulling it all together.   Barnaby is one of the organizers of the Hamilton miniatures event Broadsword from years past, and used the same venue, the Royal Hamilton Light Infantry Veterans’ hall out in the gritty east end of Hamilton, Ontario.   It was a good venue and offered all we needed.  Two large rooms were more than enough room for socially-distanced tables, and there was a bar open downstairs for those so inclined.

Everyone work masks and had to show proof of vaccination, and since almost all of us were of a certain age, sensible, and moderately at risk to COVID, there was good compliance and no grumbling.

I arrived half way through the day, as duties in the parish in the morning came first, but arrived in time to catch up with some old friends over lunch.   So good to see them for the first time since the plague years came upon us.

Keith Burnett of KEGS (Kent Essex Gaming Society) is always good for a flying game, and offered a beautiful Great War flying game using TFL’s Algernon rules.   Three Canadian aces (Barker, Bishop and Collishaw in his signature Sopwith Triplane) cleared the skies of a variety of gaudy Huns. This time the Germans were the Twenty Minuters. 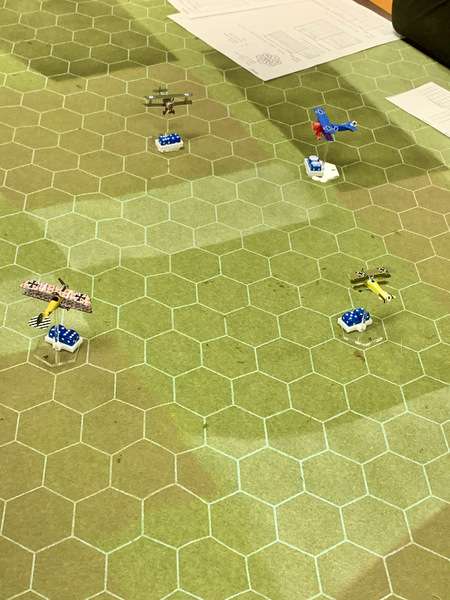 Many of the games had Canadian themes but not all of them.  Thomas S. ran a Chain of Command Barbarossa game, “Showdown at Yartsevo”. 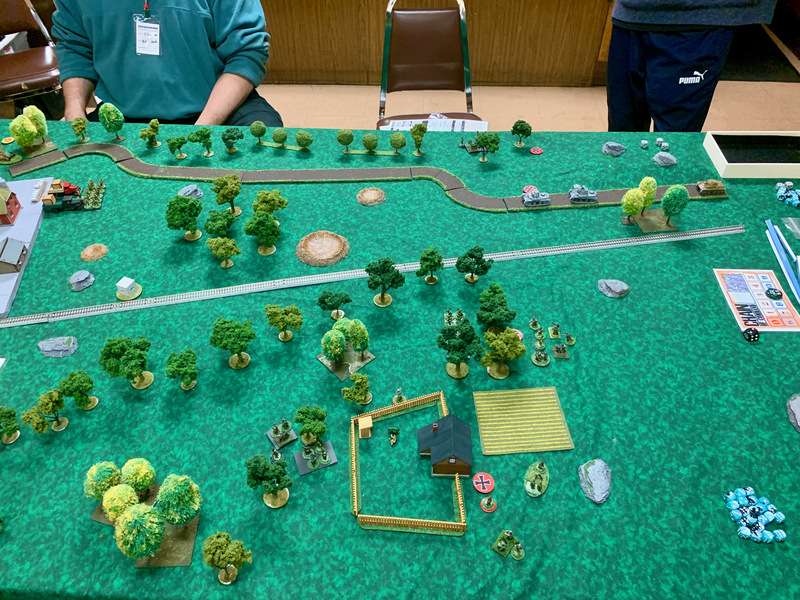 Roger C offered a cracking War of 1812 Sharp Practice game,”Raid on McCrea’s House, or The King’s Cowboys”, featuring Canadian settlers and militia trying to gather the harvest and save the livestock from US ruffians. 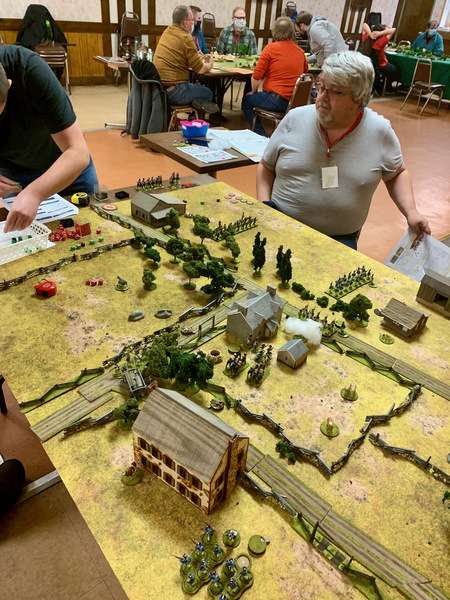 US ruffians, who were rumoured to have been “sampling the local hooch”. 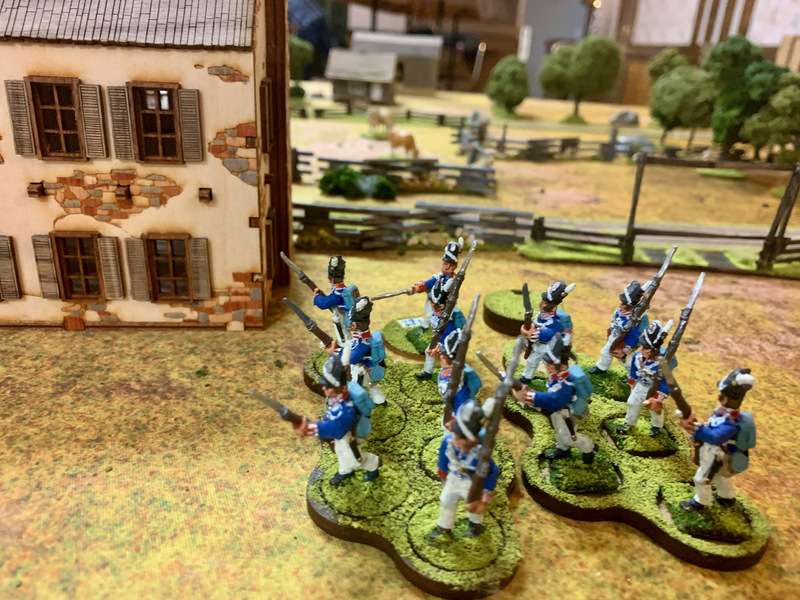 Locals defend the fence line.  That donkey on the far left might be US troops in disguise. 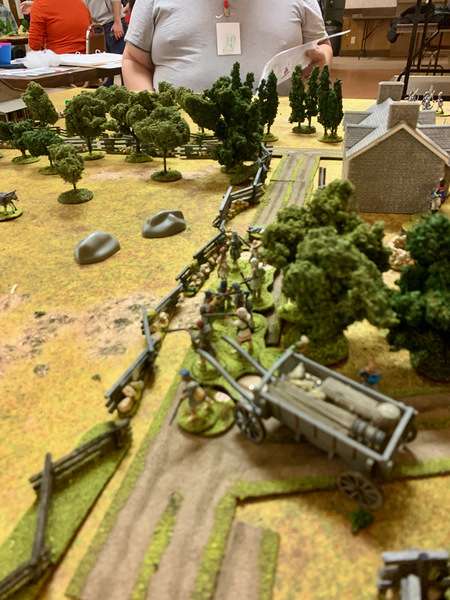 Sean M introduced folks to TFL's newish Infamy, Infamy rules, a scenario entitled “Hard Brexit” featuring Romans against Britons, whose battlecry was “Romani Ite Domum”.  Once again, the battle seemed to involve livestock.  On the left in the photo below is Chris H in the red shirt and Alex McCutcheon, our most recent Canadian Wargamer Podcast guest. 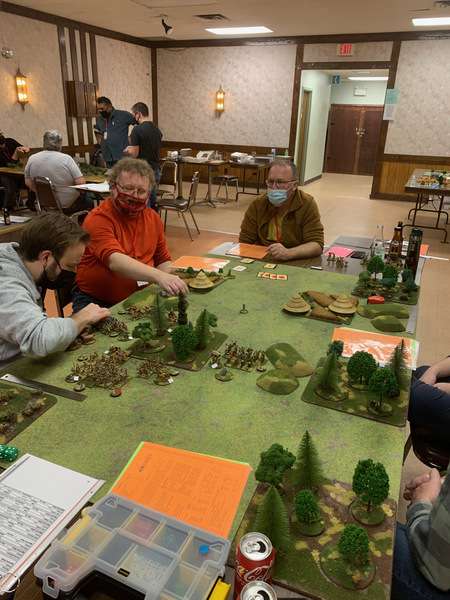 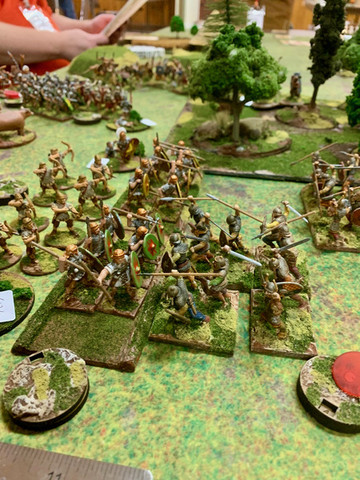 Finally, Brian Hall offered a chance to try TFL/Dave Brown’s O Group rules in a scenario called Bounce the Seine.   In an historic scenario from August, 1944, a Canadian brigade has a tenuous bridgehead and is trying to break out and deny the high ground to German artillery and spotters.   Brian’s 6mm table was quite intricate. 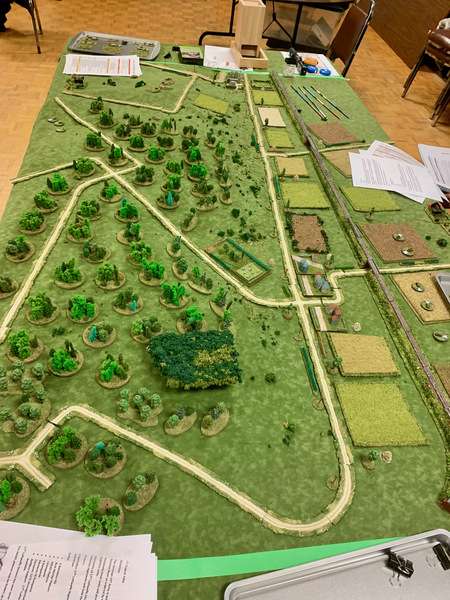 This was my game of choice.  I took the Germans, commanding a Luftwaffe infantry regiment with some artillery and armour support, tasked with holding the key village of Sottesville in the centre of the the table against the railway embankment.  Here my old chum and dastardly rival James Manto (@JamesManto4), aka Colonel Canuck, plots his attack. 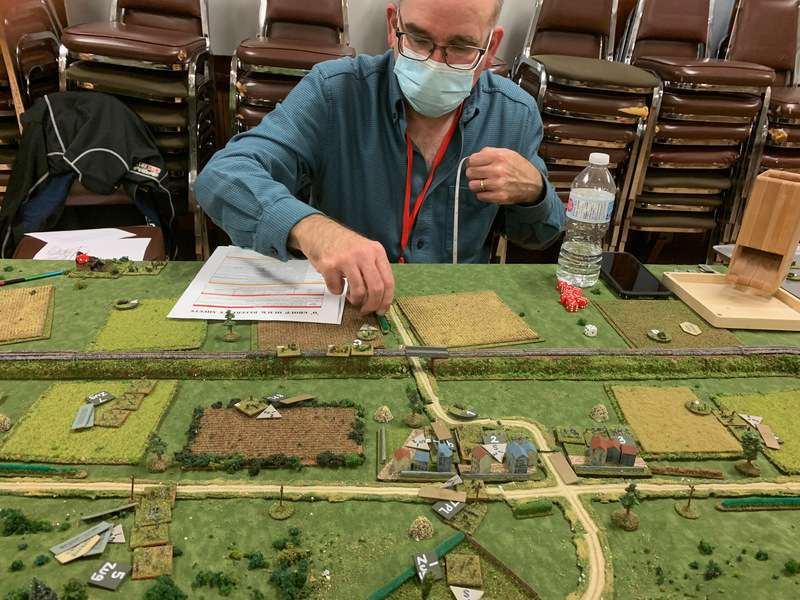 We both enjoyed our introduction to Group.  While Brian was an able instructor, I think James and I agreed that this is a complex game that requires a significant investment at the front end, but we both felt that we were actually commanding at the battalion/regimental level.   There was never enough actions (called orders) to do everything that we wanted, and as James found, it was easy to get sucked into a firefight and forget that there were other assets to hand that could be maneuvered to intervene, flank, and exploit.  Now that I have some sense of how it plays, I definitely want to work on learning it at home.

Some of the chaps stayed for a curry dinner, but as I had a two hour drive with threatening snow and an early morning, I left around 6:15pm, trusting my GPS to get me out of the labyrinthine east end of Hamilton.

Big props, kudos, and cheers to the organizers of LardEh.   It’s a significant step in the Ontario gaming scene, and I hope it leads to other Lard -themed events.    If you like, there is a Canadian TFL themed group on Facebook, Frozen Lard, where you can connect with other Canadian Lardies and see more pics of these games.

Cheers and blessings to your dice!