Brief post today to report that the three regiments of Austrian Uhlans I’ve been working on are now mustered into the Kaiser’s service.

My source for the uniforms is the Osprey title, Austrian Army of the Napoleonic Wars (2) Cavalry by Haythornthwaite and Fosten.  As I understand it, there were four Uhlan regiments in Austrian service, each distinguished by the cloth top of their Polish-style czapka headdress.    I had enough figures in the Baccus pack to do three regiments according to my practice (2-3 command and 12 troopers on a single base).

So, in the lead we have No. 1 Regt (Merveldt, later G. de C. Herzog zu Sachsen-Coburg-Saalfeld) in their Emperor yellow.

In the middle is No. 2 Regt (Furst Schwarzenburg) in dark green.

Bringing up the rear is No. 3 Regt (Ersherzog Carl Ludwig) in their scarlet.

Fortunately, all Uhlan regiments seemed to wear the same green uniforms with red cuffs and trim, and use the same lance pennons (black over yellow).

I had some left over figures from the Baccus pack, and so based these singly as scouts or skirmishers. 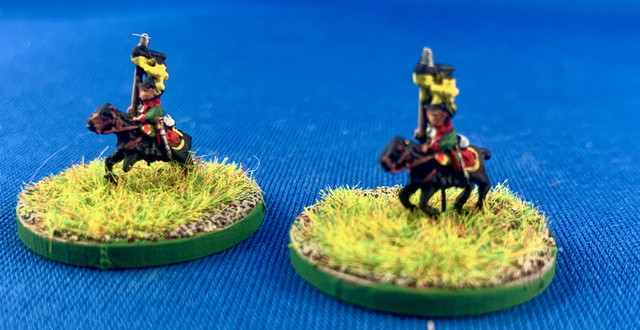 With the Austrian light cavalry in good shape, I think my next 6mm Napoleonic project will be Bavarians.  All the cool kids are doing Bavarians, it seems.

Many thanks for looking and blessings to your brushes!