For years I have admired the Napoleonic battle reports posted on Joy and Forgetfulness, the blog of the mysterious and erudite author and wargamer, Conrad Kinch.   Between elegantly presented tables, port and cheeseboards, and the witty and dashing cast of characters brought to life there, wargaming has seldom looked so genteel and appealing as it does on young Kinch’s blog.   Last week I finally had the chance to make it over the sea to Ireland.  I had planned to go to Dublin two years ago for the baptism of the young Kinch twins, but sadly that never worked out, so it was a delight to finally arrive there, where CK and his lovely wife Lizzy showered us with warmth and hospitality.  Minutes after entering their house, my fiancee Joy was snuggling with the young and handsome Master Kinch. 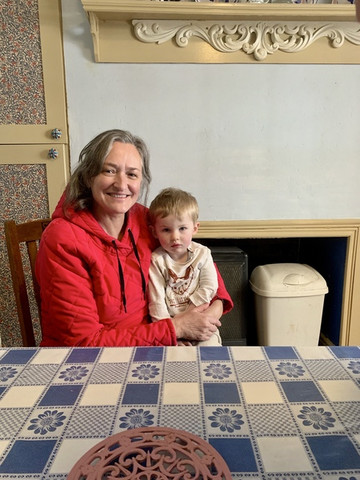 After four days in the West of Ireland, we returned to Dublin, where Kinch had arranged a refight of Waterloo.  After dinner, the gentlemen withdrew to Kinch’s war-games room, a place of wonders - and silly hats. 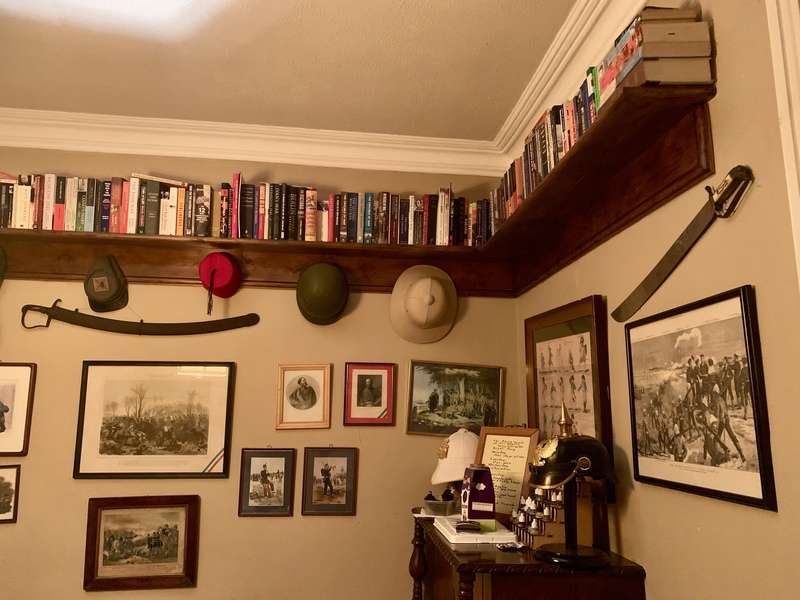 The splendid table.  Note the wine glass used as an objective marker.  “Why do you have to refight Waterloo?”  asked Joy, innocently.  “I mean, you know what happened, why redo it?”   Some things will have to be explained over time in this relationship.

As you can see from the dice, we were playing Command and Colours Napoleonics, with 20mm figures.  Very posh. 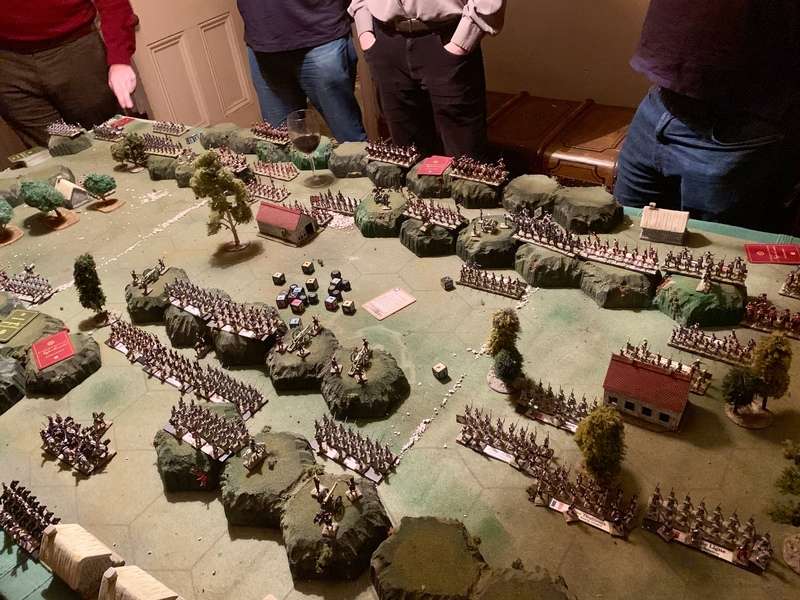 Some of the Dublin gaming brain trust assembled.   I couldn’t have wanted to have enjoyed better company.   Marshall DeGourmand, second from right, tries to persuade the English team that they should just give up now. 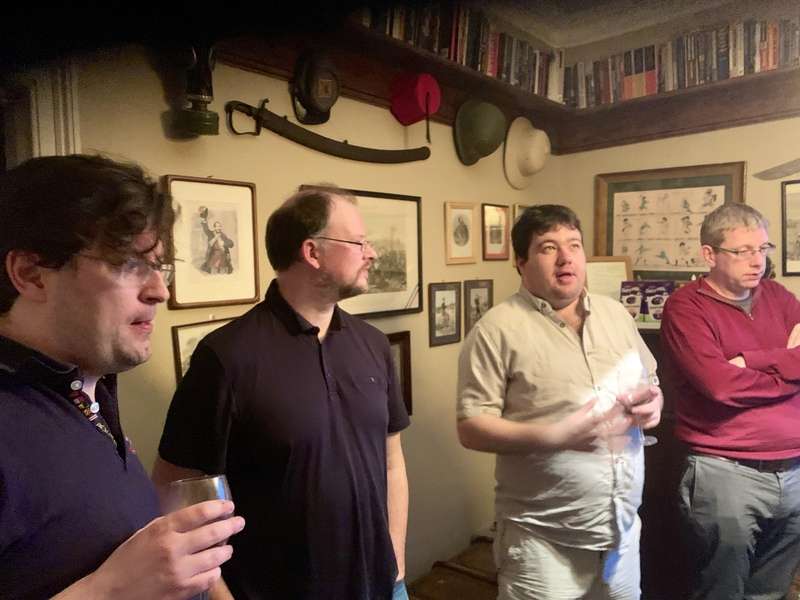 Since I am something of a Bonapartist, I volunteered for the French side, commanding the French right flank.  As I recall, DeGourmand is saying something like “Go and die there.   There, sir!”  His order were shockingly simple and to the point, though slurred somewhat by the fearful amounts of drink (note the bottle on the table). 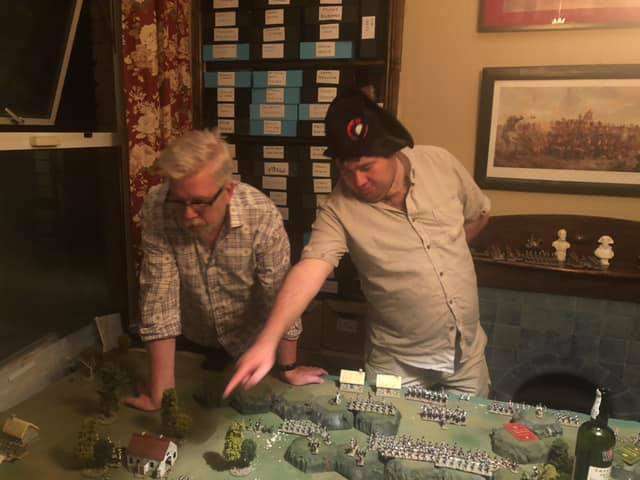 With furrowed brow, I watched as my brave chaps threw themselves on Plancenoit, drawing the entire English left into a vicious meat grinder.   As you can see, I am propping myself unsteadily on the table, praying that I can get this done before my troops all die and before the Prussians arrive, but it wasn’t looking good. 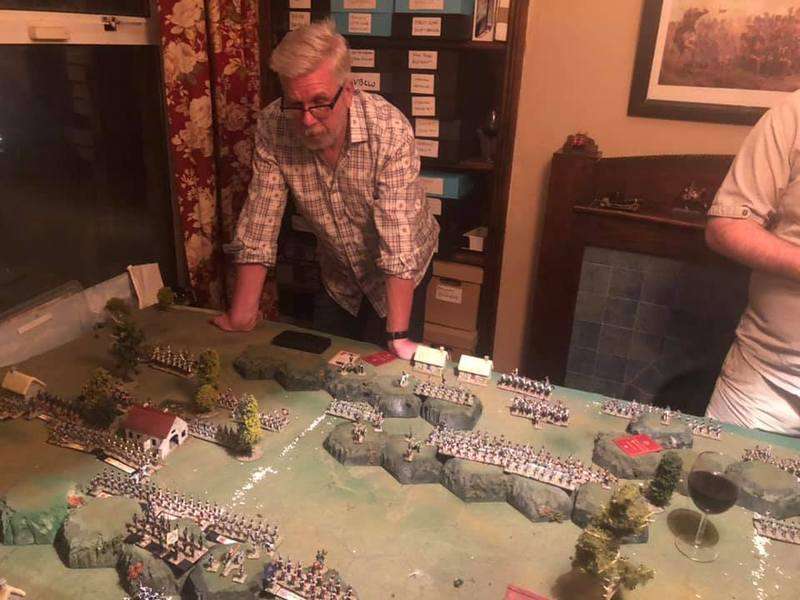 They weren’t giving up Plancenoit without a fight. 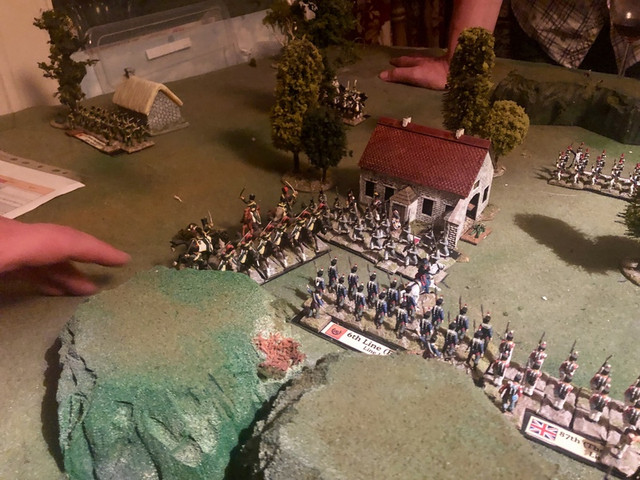 Bantering with my opposite number, General Oisin, who seems confident that the Prussian sausage-munchers will arrive and bail him out of his predicament (they did). 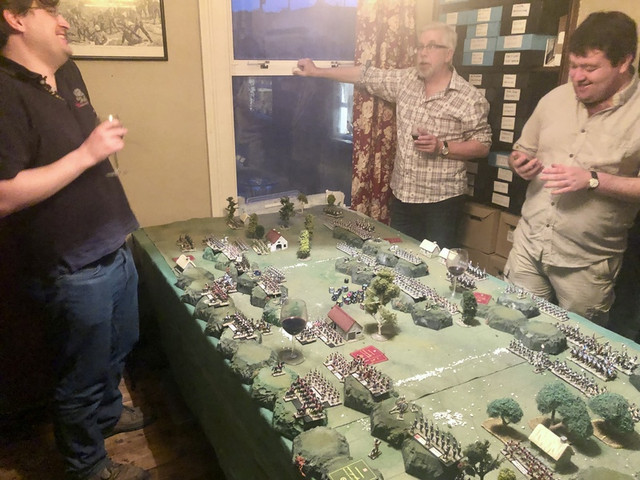 Sadly we called it a night when the port ran out and the English had managed to fend off our fine French fellows, thus making Joy’s question, “Why bother”, uncomfortably acute. 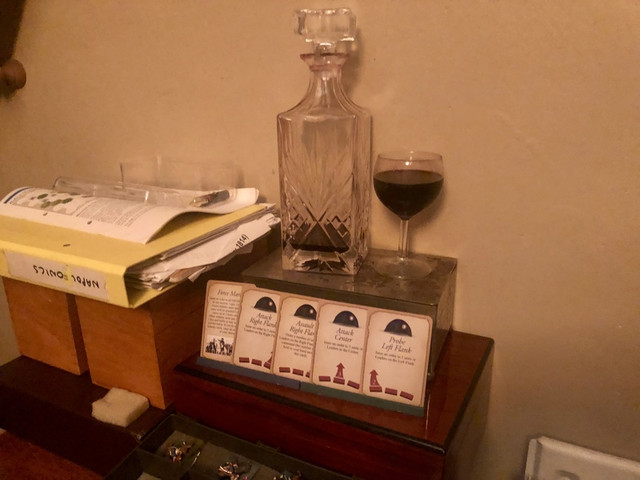 Also sadly, I don’t have a photo of CK himself, but he was a grand host and it was a gaming night for the books, though I’m blessed if I know how I walked back to my hotel.

Thanks, old chap, for a splendid time of it.