Alas, poor Yorick! I knew him, Horatio: a fellow
of infinite jest, of most excellent fancy: he hath
borne me on his back a thousand times; and now, how
abhorred in my imagination it is! my gorge rims at
it. Here hung those lips that I have kissed I know
not how oft. Where be your gibes now? your
gambols? your songs? your flashes of merriment,
that were wont to set the table on a roar? Not one
now, to mock your own grinning? quite chap-fallen?
Now get you to my lady's chamber, and tell her, let
her paint an inch thick, to this favour she must
come; make her laugh at that.

It's been a tough time for hobby stores around here, and I've felt a bit like the Melancholy Dane, wandering around examining their remains.

Last week, during our House Hunting Trip to Barrie, I revisited some I knew.   One was called The Dragoon, in a small village called Cookstown.  A friend took me there in 2010.  It was a in a small cottage, run by an older fellow, and it was full of nice stuff, a lot of larger scale pre-painted models from companies like King and Country and Forces of Valour.  He had some nice dioramas, and a lot of model kits, ESCI and the like.  It was a brilliant little place.  Drove around Cookstown for ten minutes, couldn't see it.  Finally found the building I thought it was in, and it was a business for people who want to learn to really  communicate with their pets.  The Dragoon still has a ghostly presence on Facebook, but it seems to have gone under around 2014.  Here is the only tangible sign of it I have left, a fridge magnet. 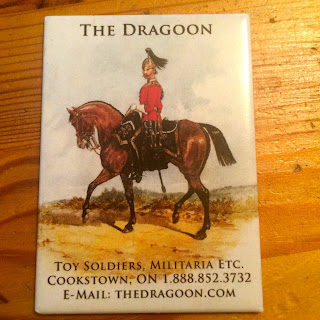 Mme. Padre was very kind about letting me search for The Dragoon, and allowed me to look for another store I remembered.   Gamers' Lair was in a storefront in a small retail plaza at the south end of Barrie.   I recalled it well because the last time I was there, also around 2010, I bought a few items and before I started my car to drive off, I realized that the owner had undercharged me.  Went back in, paid the difference, and he very kindly gave me a box of micro dice as a sign of thanks.   I always think of him as I use those dice.  It was a pretty mainstream store, stocking GW, Flames of War, and the like, with a gaming space in the back of the shop.   I wasn't expecting much, but I thought it would be a useful place to buy paint and such.  Gone.  Empty.  Sign still there, but darkness and emptiness in the windows.   Alas, poor Gamers Lair!

The next one isn't quite a skull scene, but it's close.  My chum James announced last week that he was  getting out of the miniatures business as well.   J&M Miniatures was a joint venture between James and his friend Martin, and I've plugged it several times here in the past.   J&M was a webstore and a mail-order business, but in a way it was also a storefront.  James maintained the business' stock in his house, and it was not unknown for his friends to drop over and "fondle the toys".  I have gone over to his place for a game several times with some money in my pocket, knowing that I would come home with something.   James and Martin wanted to take the business in different directions, and so James graciously bowed out and let Martin, who had made the initial capital investment, take over.  I wish Martin luck and will no doubt be a customer in future.

James and I have talked many times about the frustrations of running a wargaming hobby business.  In North America the hobby market is dominated by one major distributor, and so there wasn't a lot of room or margin to make a go of things, even without a bricks and mortar and payroll costs to maintain.  It was difficult to anticipate demand for new product launches, or to anticipate the trends that rapidly blow through the hobby.  Would the WW2 market be sufficient to stock a lot of Plastic Soldier Co and Warlord stock?  Would he have enough Perry Brothers product, and the right mix of that product, to satisfy the Napoleonics gamers?  And what about stocking enough product to catch the latest trends?  Pirates?  Zombies?  Wild West?  Samurai?  Laser cut MDF buildings? What happens when those trends have done and people have moved on to the next one?  I didn't envy James and Martin having their money tied up in products that weren't moving as quickly as they needed it to move.  James also remarked on the difficult customers, people who would demand discounts or home delivery of product since James lived a few towns over.

Perhaps the day of the bricks and mortar hobby store is done, like the video store.   In nearby London, Ontario, a family-run model store is closing after decades in the business.   McCormick's Hobbies stocked a wide variety of paints, particularly Vallejo, and mostly catered to larger scale modellers rather than wargames, but for years it was my paint shop of choice.   I'm hoping that the one gaming store still operating in Barrie will carry paints, otherwise I'll have to order them online.  Which, I suppose, is the reason that the hobby store seems to be dying, because of online ordering.

When I think about it, other than buying consumables like paint, flock, and the like, very few of my hobby purchases (other than the stuff I bought from James when visiting his house) have been from physically located stores.   Almost all of my miniatures purchases (figures, rules, model buildings) have been made via online purchases direct from manufacturers.  Very few of my miniatures purchases are spontaneous.  I know what I want, I know who makes it, and the manufacturers all accept orders over the internet.  Shipping prices to Canada are seldom cheap. since most of the manufacturers are in the UK, but I accept that as the cost of a hobby.  Disposable income is disposable income, and I'm usually willing to pay the shipping to get what I want.

I can think of a few stores that will likely survive.  When I lived in Alberta, Sentry Box West in Calgary was always worth a visit while in the big city.  I recall the owner telling me that he owned the building free and clear, and that the bulk of the business from teen gamers (RPG, GW, and the like) underwrote a fine selection of historical miniatures and boardgames for people like me.   Sentry Box was also in a large metropolitan market, and augments that market with sales over the internet.   Even so, it's a small market, and being in an urban centre (Chicago) didn't save Emperor's Headquarters, which I recall fondly from one visit in the late 1990s. Alas, poor Emperor's Headquarters!

I am sure it is different in smaller geographies, like the UK.   A lot of the blog posts I see from visits to Salute, Triples, and the like seem to mention the shopping as much as the gaming.   In a larger country, like Canada or the US, there are fewer shows and smaller customer bases.  I don't attend many shows, but the one I attend regularly in my region, Hot Lead in Stratford, isn't really a shopping destination for me.   For the last few years I've gone, the number of vendors seems to be shrinking and what's offered is very trendy, so if one isn't into Steampunk, for example ....

Perhaps the owner of The Dragoon didn't go out of business.  He may have gotten sick, or decided he was too old and wanted to go on cruises instead of minding the store, but the fact that his Facebook feed ends abruptly doesn't sound like a planned exit.   I once wanted to do something similar in retirement.  I had a daydream of going to a tourist town somewhere, one popular with older couples, and set up a wargames/militaria store with a license to serve alcohol.   Chaps could drop in for a pint and a look at the toy soldiers, even learn to war-game while their wives looked at antiques and yearn stores.  However, that was just a fantasy.   In real life, I couldn't think of anything more dangerous to do with my retirement nest egg.  Betting it all on the horses would seem sane by comparison.   I hope it's not premature to sound the death knell for the wargaming hobby store, but these days, it sure seems like it.