Here are the results at the end of the F1902 Adjustment Phase, with a summary of builds:

.General Erasmus Blatt is a better judge of these things than I am, but here are some quick comments.

England surprised me by building an Army rather than a Fleet.

France is hedging its bets between naval and land policy and holds the balance of power in the West.

Turkey’s new Army in Ankara should give the Russians pause for though, although Sev is safe for the moment.  On the other hand, Russia’s build of an Army in Warsaw shows that it wants to be a serious player in the battle for the remnants of the Austrian empire and for a share of the Balkans.   I don’t see how long-term peace between Russia and Turkey is possible at this rate.

Italy’s build of an Army in Venice is also surprising and shows that it has, with some justification, trust in France and Turkey, though with only one fleet in Tunis,  Italy has to be watching the waters east and west with some trepidation.

While Germany bids adieu to being a sea power, it has two armies concentrated in the east and could be a definite spoiler.

Let the Spring 1903 turn begin!  Hopefully we can get all orders in by Saturday midnight my time, but I want to leave some time for diplomacy.   I’m sure there will be a lot of it. 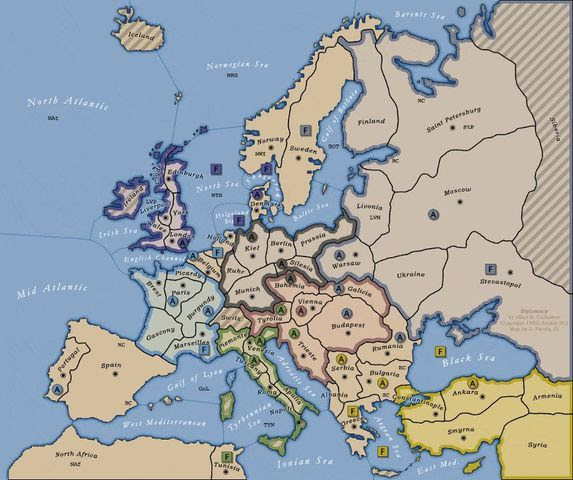