Psycho Killers Of The Old West, And Other Gaming Adventurers

It’s been an interesting weekend to be sure.    Saturday was the day of KEGSCON, a small gaming day with a big heart put on by the stout lads of KEGS (Kent Essex Gaming Society), a merry bunch of SW Ontario gamers centred in Chatham.   Sadly I was unable to spend the whole day there, as I had committed to an Army event that morning, filling in for an Army Reserve padre friend.  I didn’t get on the road until after noon, and had forgotten how far it was to Chatham - two hours from my door and only another hour from there to Windsor/Detroit and the US border.   My chum Rabbitman was there for the whole day and had a grand time in several splendid looking games.

I got there about mid-afternoon, in time to strap myself into a Y-Wing and try the Star Wars X Wing game that seems super-popular at the moment.  I had fun, but found the level of chrome and the presence of killer-pilots a little distracting.    It doesn’t seem quite fair, as rookie Y-Wing Pilot Guy, going up against Darth Vader and the Imperial Shuttle of Doom and then discovering that the bad guys had a series of cards which suggested that Imperial saboteurs had been awarded the Rebel Alliance X-Wing Maintenance Contract.  Damn these government cutbacks!  Does nobody do background checks anymore?  That being said, I liked the system, and the manoeuvre plotting and simultaneous revealing reminded me of ancient WW1 flying games like Avalon Hill’s Richtofen’s War.   I think if I was going to invest in this sort of system, I would look at Wings of War and go that route rather than the Star Wars route, though is someone ported the X Wing system to the Babylon 5 universe, that would be another story.

It’s simply amazing that anyone survived the American West, if our evening game was any indication of what a psychotic place it was.   All those who stayed after dinner were given a miniature and invited to place it anywhere in this model town, which combined two different manufacturer’s buildings in one long street of death. 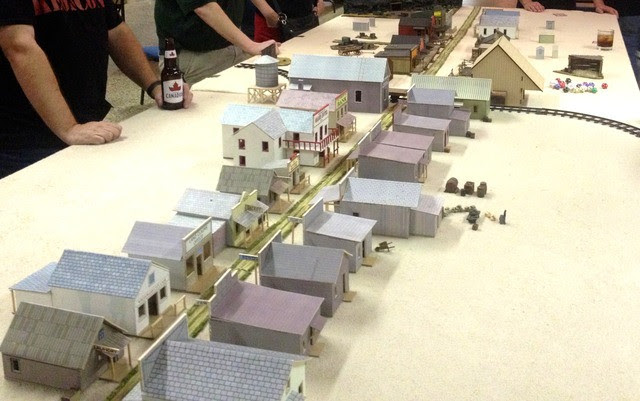 The objective of the game was brutally simple:   last man standing.   Everyone had a six shooter, there were no teams, though we were free to form alliances on the fly.    Each player had a standard playing card assigned to them, and there were two of each player’s card in the game master’s deck, so when your card came up, you could either shoot or move, and could perform any combination of these actions a total of three times.   Mostly I stood still and shot three times on each card.   All movement and shooting was governed by D20s, there was another dice for hit locations, and the severity of wounds was assessed on a chart using D20.  Generally getting shot in the head or body was bad to worse, while getting shot in the extremities was  more annoying than fatal.

Poor Rabbitman stumbled into someone, missed him at point blank range,  and was in the process of apologizing for his negligent discharge when he was promptly gutshot.   His death was long, bloody, and rather comical.

Here’s me, the Psycho Preacher, skulking against the barn and blasting away at Keith's (our game master) character.   After ten shots, I think I nicked his elbow. 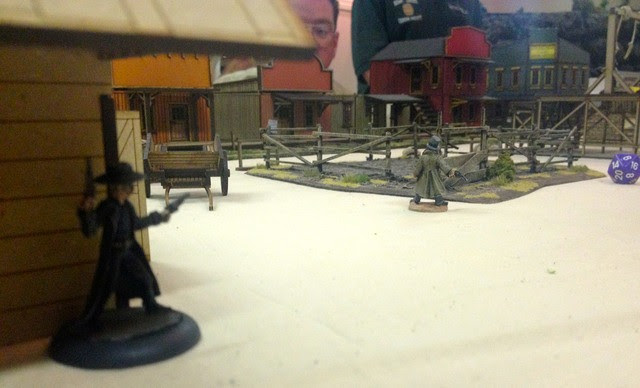 Annoyed,  because he had several other people also shooting ineffectually at him, Keith turned and dropped me with a bullet to the head.   Moral of the story, if you’re going to target the game master, put him down the first time. It was a great game, players of several generations, lighthearted, incredibly simple, and lots of laughs.   It was a good way to end a long and pleasant day.  Even a two hour drive home in the dark and the rain was made fine thanks to a rebroadcast of a terrific edition of Marion McPartland’s Piano Jazz, in which she talks with and plays two greats of contemporary jazz, Bill Charlap and Renee Rosnes.  If you like jazz and want something to listen to during your next painting session, have a listen.  McPartland’s voice sounds old and frail but there’s nothing wrong with her playing, and her delight when Charlap and Rosnes play some of her compositions is incredibly touching.  The two were very gracious with her. 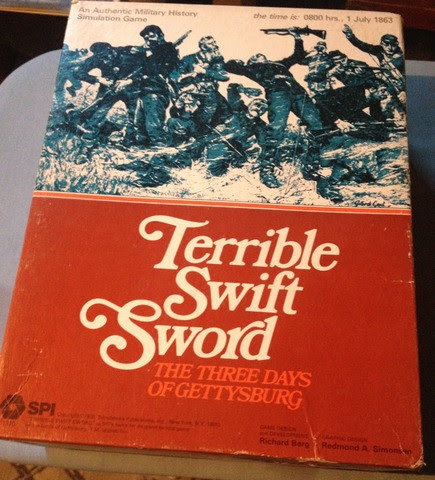 The cherry on the ice cream for me while at KEGSCON was finding a copy of this old SPI game, perhaps the most famous monster game of the 1970s and most famous of the Gettysburg wargames, Richard Berg’s Terrible Swift Sword, in the near-original detergent-box-style package (I think the first edition was in the plastic SPI pizza box format).  The counters are punched and it’s a little battered, but still, it’s cool.   If you are curious why TSS is a big deal in the paper board gaming world, there’s a short and useful account by Russ Gifford here.  Yes, there are a hundred reasons why a tabletop miniatures game of Gettysburg would look better than all three maps of TSS crowded with those dull 1970s era counters, but I am still darned happy to have added this game to my collection for a tiny fraction of what it would have cost me on eBay.  Lord knows when I’ll get the chance to set it up and play it.  Now, if only I can complete find SPI’s Campaign for North Africa and Next War, my monster game collection will be complete!

Of course, if you doubted that tabletops full of beautifully painted miniatures were not cool, you only have to look at Henry Hyde’s Wargaming Compendium to be convinced of that.   I can happily report that thanks to a contest run by the gentlemanly and talented Jonathan Freitag, proprietor of the Palouse Wargaming Journal, I now own a Kindle copy, and can Hyde within it looking at the pictures and inspiring text when I should be writing my thesis.   Many thanks, Jonathan, you rounded out a good weekend for me.

Today is of course Tuesday, and I wish I had time to post another instalment of Boardgaming Tuesday.  I may do so on Wednesday, since I still have A Distant Plain on my boardgames table and just took my training wheels off.   I’ve finished the tutorial scenario and have started playing the game for real.   Hopefully I can report on that soon.  There may be another issue of the Daily Dissembler forthcoming before the results of the Spring 1902 turn of the current Diplomacy game are published here.   Such excitement, and I haven’t even started to think about a weekend away with Madame Padre in Appa the Volksbison!

Blessings to you!
Michael