Since getting back from holiday I’ve managed to get a few hobby goals accomplished, including finishing off and basing these 6mm French Napoleonic figures.   The bases are a little ungainly, as they are basically hacked from MDF board using a craft knife and my own unsteady hand.   I could purchase some laser-cut bases, I am sure, but I’m reluctant to spend that much money on all the bases I would need to mount the 6mm collection I purchased last winter.   The base sizing is according to Polemos specifications.  The command figure is part of that big 6mm collection. 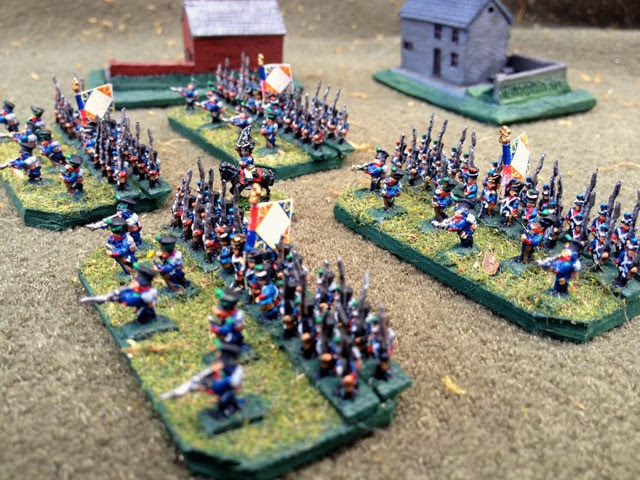 Each stand has 24 line infantry figures and 6 light infantry figures to serve either as eye candy or to represent a skirmishing capability if the rules and scenario allow for it. Depending on the scale of the rules, I could call this either a brigade or, with the necessary artillery and cavalry, a division. The flags are also from Polemos and yes, one of them was placed upside down by error - I’m call to call that my Amish mistake (even if the Amish mistake is a bit of a myth, humility is still a good thing). 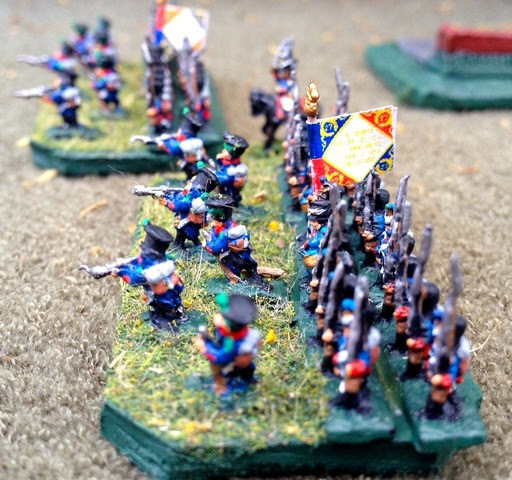 The lights are from Baccus’ French Voltiguer set and come in strips with two poses, loading and firing.  I was disappointed that they didn’t have the lovely tall shako plumes that Voltiguers often wore.  Also, I’m not sure if specialized light infantry units would be assigned to skirmish in front of line infantry, but I liked the look of it, so there.  More and more I am realizing how little I know about this period.

To give them someone to fight, I am busily basing Austrians while devouring The West Wing on Netflix.  There are also a lot of French chaps to base.   I also got an order of scenics from Timecast, which are absolutely delightful, and I hope to start in on them soon.

To develop my Napoleonic skills, Kinch and I met on the electronic field of battle this morning, playing a Command and Colours game using Google Hangout.   I was soundly drubbed.  More to follow.

Blessings to your brushes!  MP+