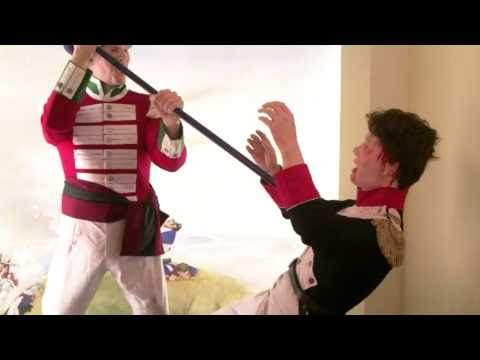 The chap on the right and I both had a bad day at Barossa.

Young Kinch and I once used Apple Face time to play a battle of Command and Colours Napoleonics, that being his favourite brew, with one of us being in Dublin, Ireland and the other in Medicine Hat, Alberta.   Two years later, we repeated the experiment, and while my home had shifted a bit Dublinwards since then, we still needed technology to make it happen.   This time, on CK’s suggestion, we used Google + Hangouts, which worked just as well.   All I needed was a quick download from the App Store for my Macbook Air and we had the connection up and running.  The advantage of Google Hangouts, vice FaceTime, I think, is that the Google method would allow more than two players to join in on a game, though I may be wrong there.   There was another reason for using Google +, something about one of CK’s infernal machines, which he may want to expand on.

The battle we chose was Barrosa, from the CCN first expansion, the Spanish Army, which sadly I don’t have and the queue of punters necessary for GMT to do a reprint is not terribly long at the moment.  However, I had the CCN basic set, and used Portugese blocks for the Spanish and green blocks from the Russian expansion for the single unit of Portugese.  Worked well enough.   We chose Barrosa because CK had the game set up in his fabulous gaming room using proper figures and scenery.  I had the GMT version, somewhat less fabulous, in my prosaic Canadian basement.  Rather than fuss with one player holding the other player’s cards up to the computer camera and hoping they were decipherable on the other end, we each chose to use our own CCN card deck, meaning that were playing with twice as many cards as we would in a normal game.  I don’t know enough about statistic to know if that was a pardonable sin, but it was a practical solution.

In the Barossa scenario the French have the first move and they have two jobs, to smash the four inferior Spanish units on the hill which is the key to the battle, and to seize the hill itself.   Taking the village of Barossa on the French far left of the board is a useful means to this end, and can be done with a French light infantry unit which is two hexes away from the empty village and can seize it on its first move.  I wish I knew why I didn’t do that.   Instead I used the Grand Maneuver card to advance four line units at the hill, hoping to drive off Kinch’s Spaniards with the bayonet.   Sadly, I didn’t count on Kinch holding two First Strike cards, meaning that he was able to shatter two of my units before they could land a punch.   In this rather grainy photo you can see the situation shortly afterwards.   CK still had three functioning Spanish units, and had pushed his British Grenadier Guards forward.   They took a pounding, but by the time they died hard I had wasted much time and shot my bolt.  Speaking of Grenadiers, you will see my own Grenadiers in this photo, still waiting patiently on their start line when they should have been committed much earlier. 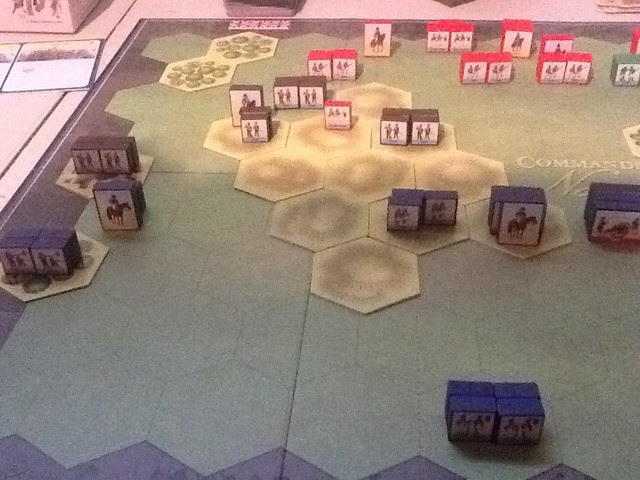 And it all goes rather pear shaped as CK throws in Graham’s  British infantry and begins pushing me off the hill while French casualties mount. 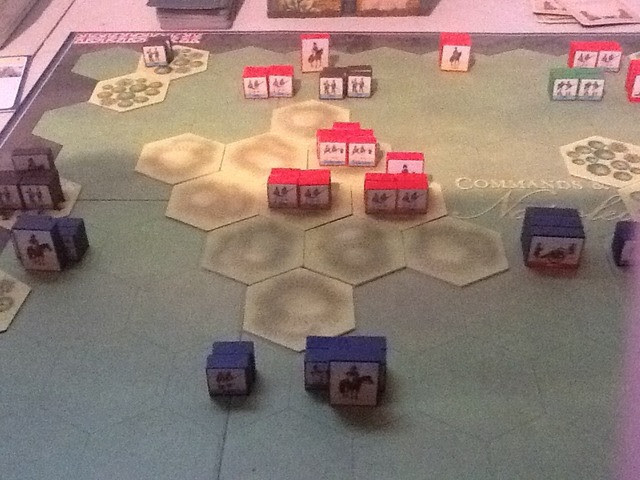 Oh dear, this will be hard to explain to the Emperor.

The endgame, with the cavalry now in play.  My heavies have had their chance and accomplished little, while CK’s lights threaten the remnants of my infantry on my left wing.

My lesson from this game, helpfully underscored by CK’s observations, is that I need to be much more aggressive with the French.  Toujours l’audace!  True, I had some bad luck with the two First Strike cards, but I did not push enough forces onto the hill early on and was too shocked by my initial repulse.  Also, as I get more of my 6mm collection sorted and based, I am wondering if I should look at some sort of hex map that would allow me to place figures and scenery on, similar to what CK and Ross M and others do.  That would allow me to use my own figures for CCN games if I wanted to.   It bears thinking on.

I recommend Google Hangout to you if you want to play CCN with a distant friend (not a friend who is distant, as that wouldn’t be a very good friend, but a friend who lives at a distance), or with me for that matter.

Blessings to your die rolls!  MP+