Praise the Lard for Chain of Command!

Here's an AAR from a few months back and a brief review of Chain of Command, the new skirmish-level rules from Too Fat Lardies. 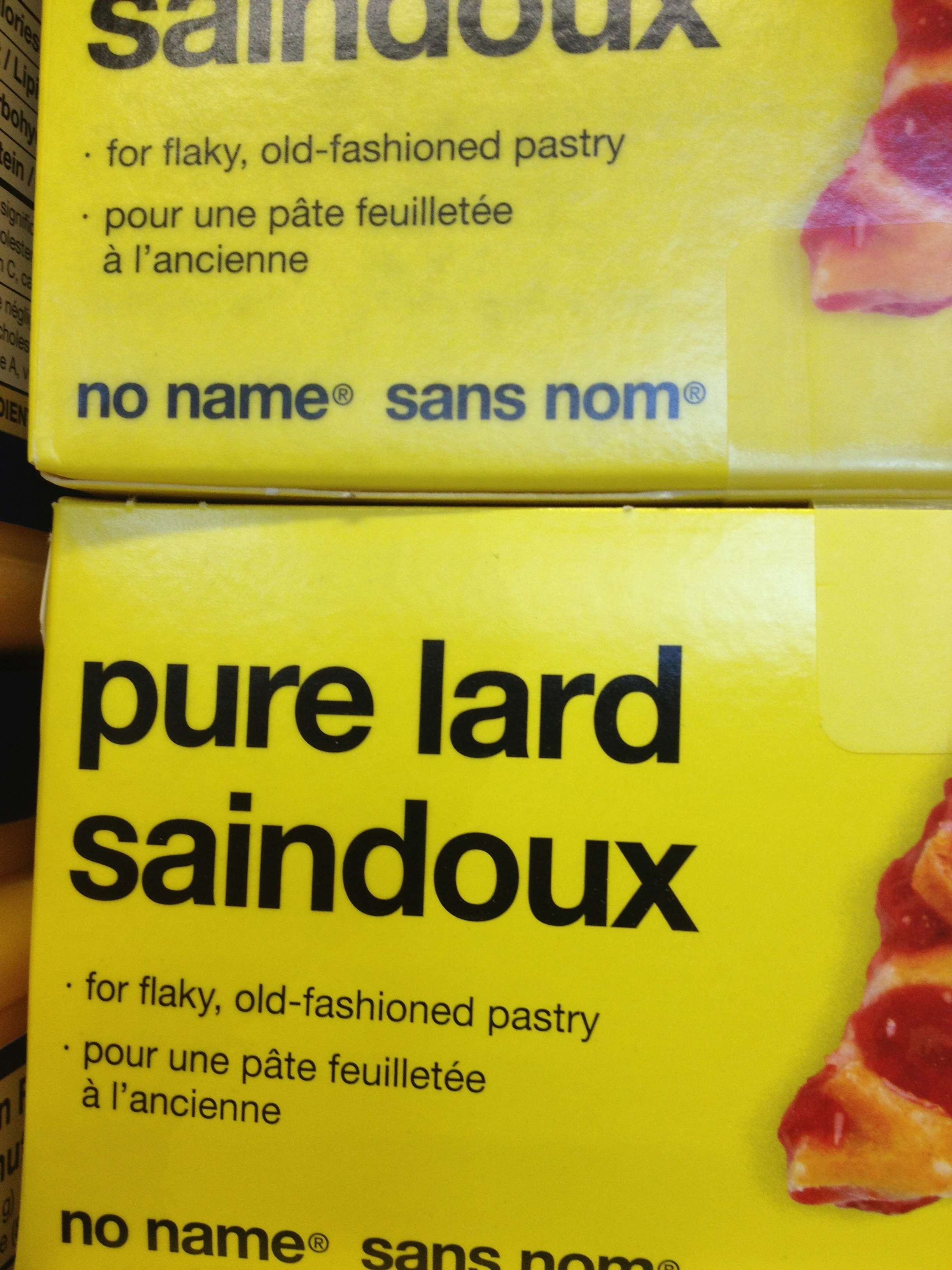 I ordered the .PDF set of the rules from TFL for a quite a reasonable sum, and have access to it on my tablet and my laptop.  As always, Richard Clarke was very helpful and attentive to a minor issue I had with the download, and all was quickly resolved.   I honestly don't know how Rich does it, investing so much time in the rules, and so much of how own money in the launch, but from what I hear on Lardies Comms, the rules are a hit and he's been rewarded for the investment of time and treasure.   I certainly hope so. 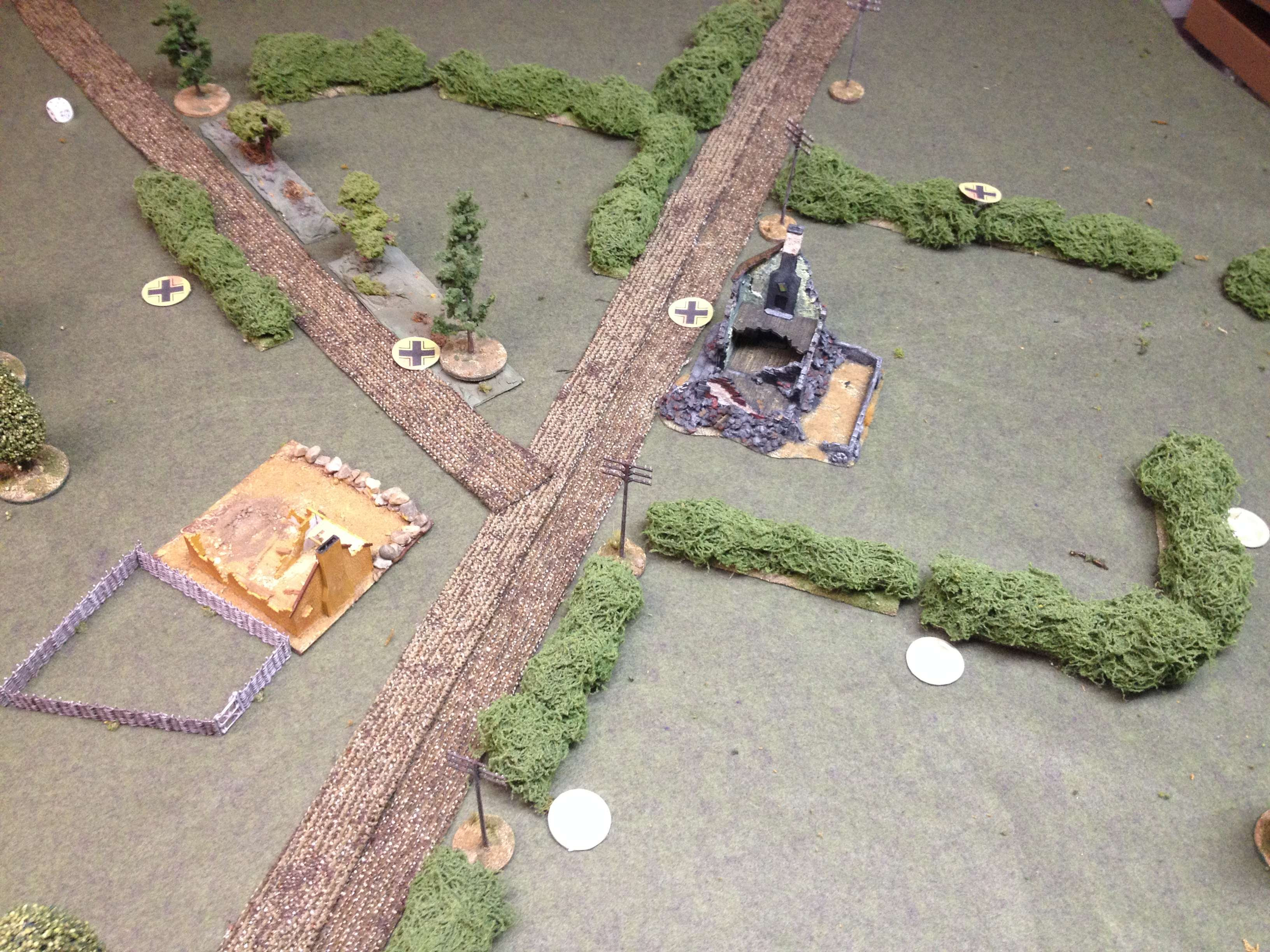 Chances are there are very few readers of this post who don't know about Chain of Command (I confess I wince at the acronym, as I did with the previous rules, Troops, Weapons and Tactics.   Boys will be boys.   I puzzled my way through the rules solo and found that the mechanics, at least as far as shooting and melee, were very similar to TW&T (wince) and I Ain't Been Shot, Mum.   So something this fall (October, maybe?) I drove over to Strateford and to Rabbit HQ where James Manto and I tried a very simple fight, a Brit platoon vs a German one, somewhere in Normandy.  We found the patrol phase quite interesting, and a game inside a game, really.  Here's the table with at the end of the patrol phased.  James had his in a line across the centre of the table, while I had two up near the house (visible bottom right of the photo behind the hedge) and two back bellow the bottom frame of the photo.  At this point we converted our patrol markers to jump off points. 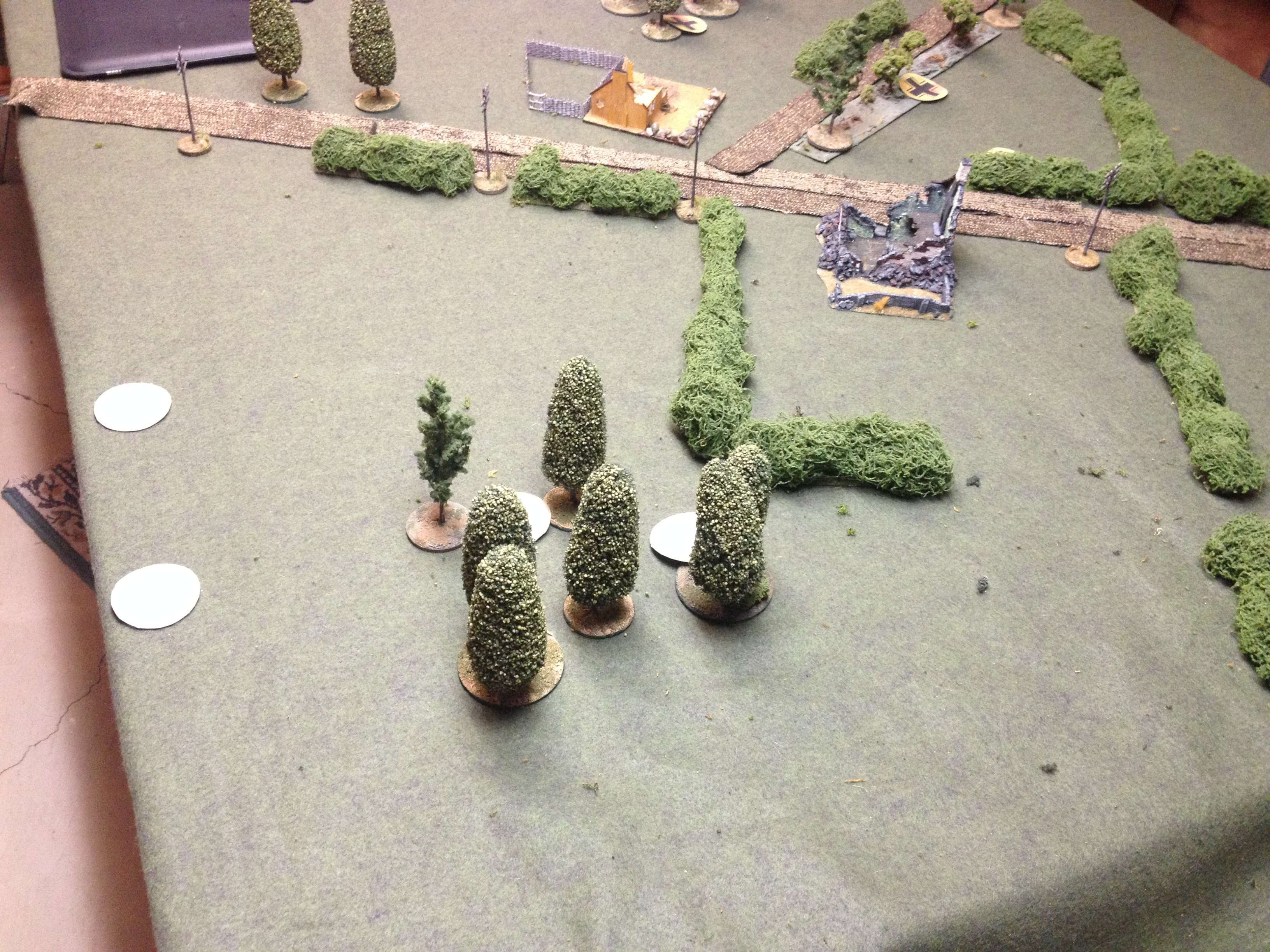 Here on the right side of the table are my four Jump-Off points, two in the woods near the ruined house in the centre of the table, two on my table edge. 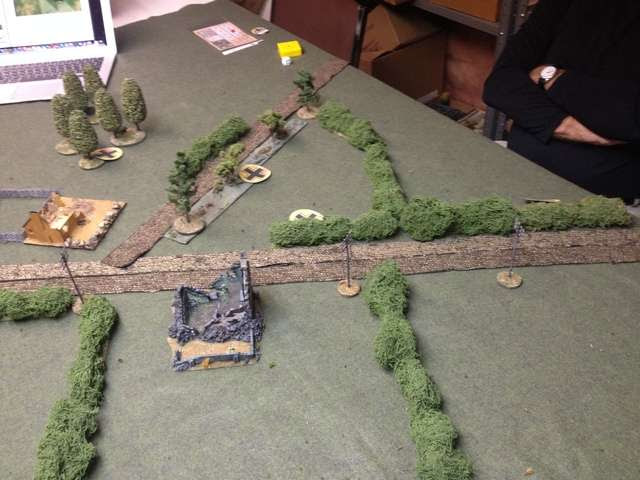 James' four jump off points, much closer to the centre of the table than mine.   James folds his arms triumphantly, savouring the victory to come. 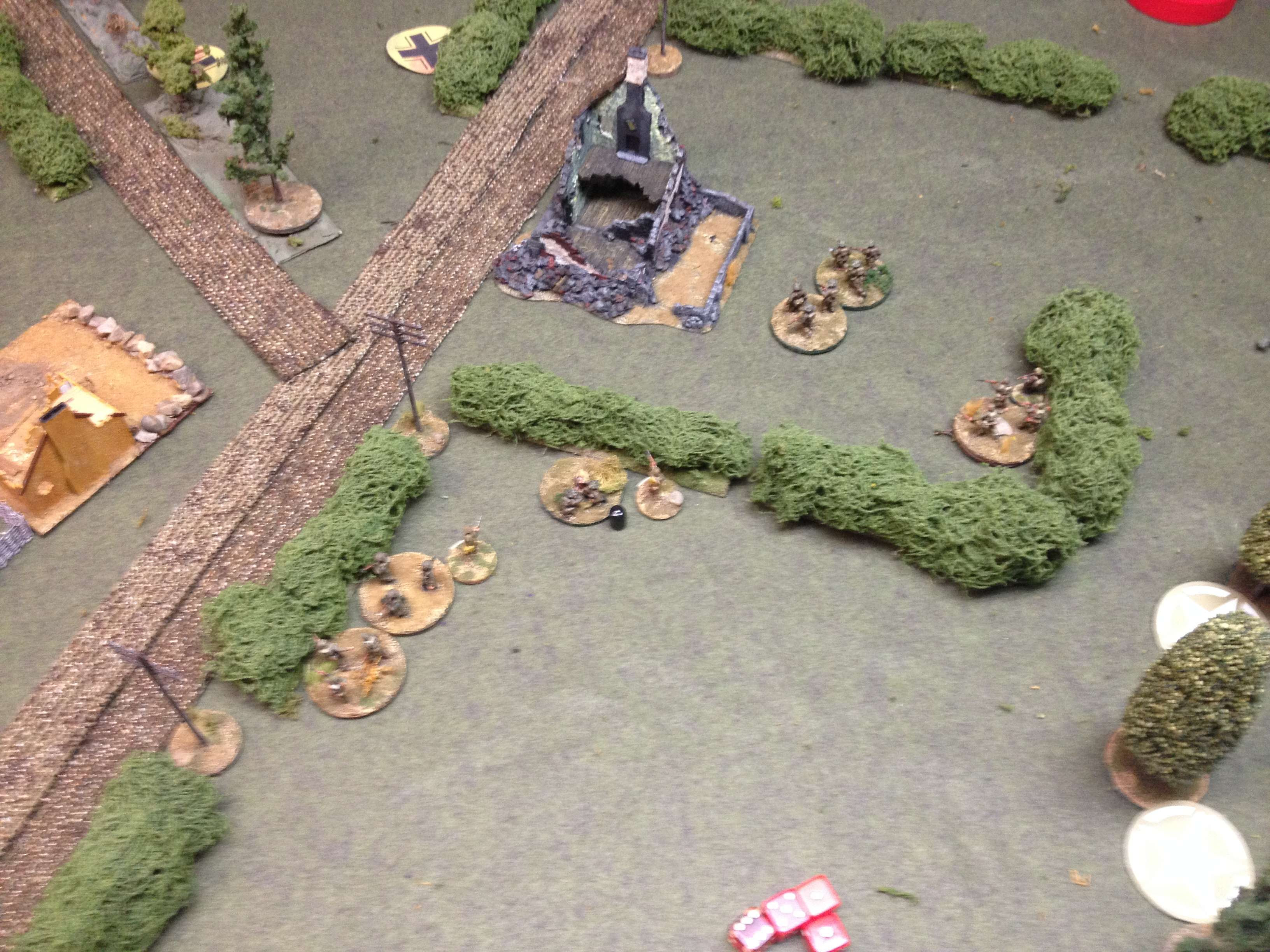 I had a good sequence of dice that allowed me to bring my three sections and platoon CO onto the table.   With one section lining the hedge, the other ran for the ruined building which attracted me like a rabbit. 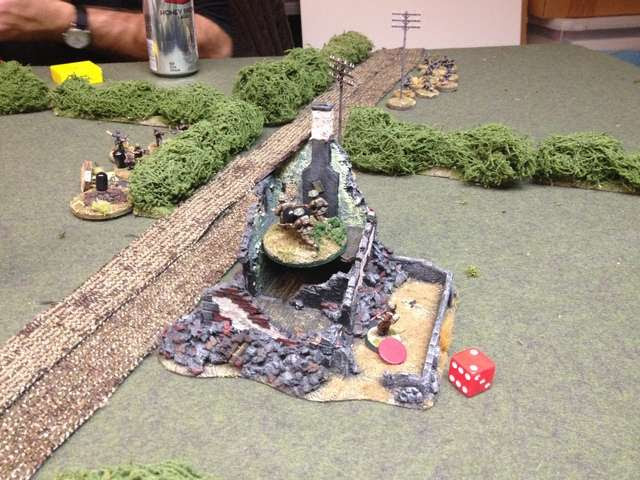 I got my section into hard cover but it wasn't hard enough cover against a German MG that James got into action.   My section leader was wounded and the lad were whittled down pretty quickly. 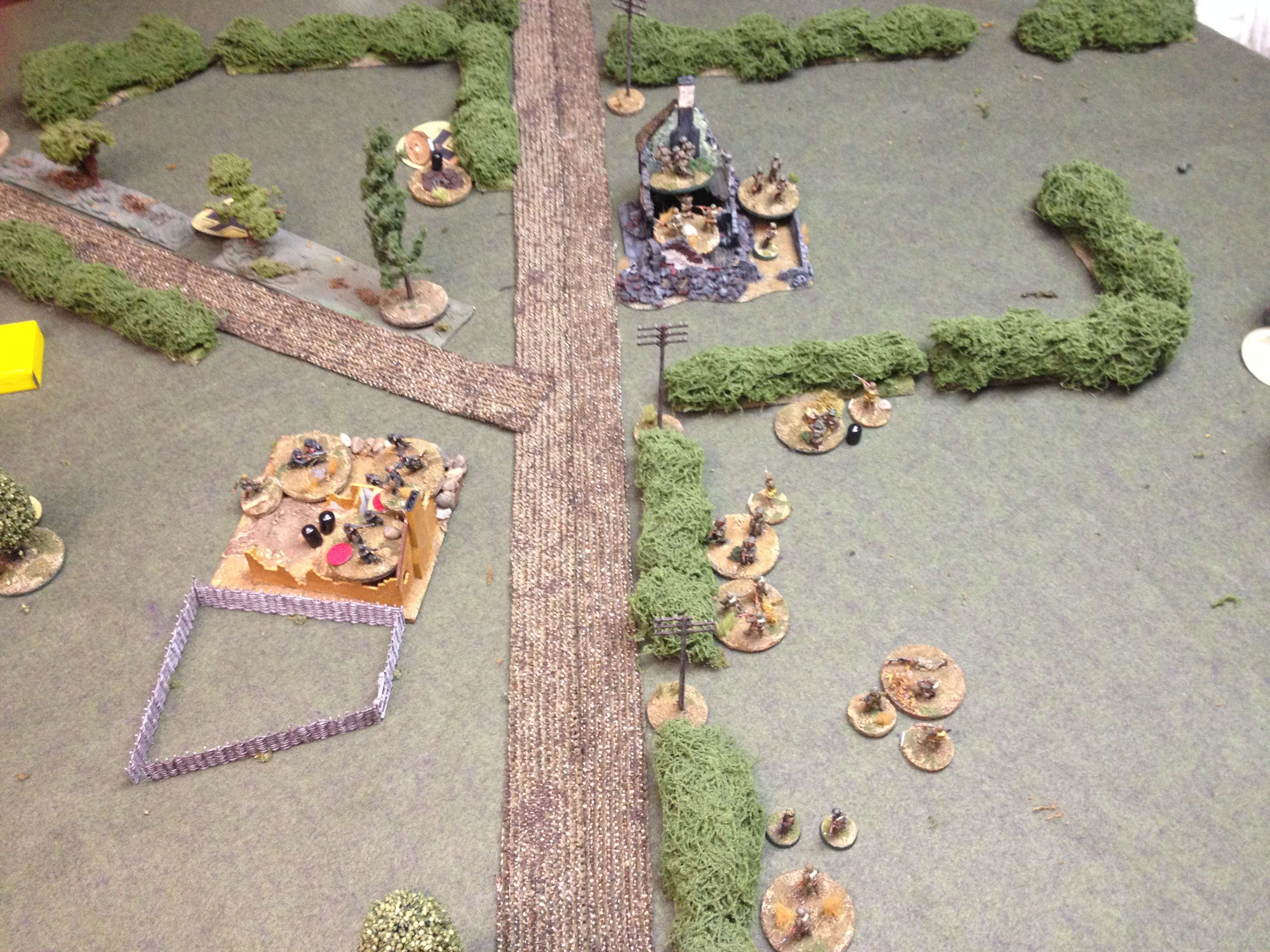 The game ended well for James.   My battered section fell back out the bullet magnet of the house and I was watching James starting to lap my flank on the right.   My other two sections were still intact and lining the hedge on the right side of the road in the photo above, and had damaged the German section opposite them.  However, I was now outnumbered, since James had elected to take as a support choice.  I forgot what support choice I took but it didn't help me much.  I conceded.

I apologize for the dearth of photos, that don't really show much except for the use of Patrol and Jump Off markers and the overall flow of the skirmish.   Hopefully they convey something of the game.

Some thoughts about Chain of Command:

The pre-game phase, placing the patrol and jump off points, is interesting and makes the game fresh and interesting, as opposed to placing your troops in advance.   CoC (wince) gives you some significant tactical choices as to where and when to feed your troops into battle.

The use of command dice as opposed to the traditional Lardie method of assigning cards is simple and much less cumbersome than assigning cards to sections and elements in advance.

Leadership and morale are still very important in the game, keeping it true to its Lardie roots.

The basic mechanism of CoC is highly adaptable.  I am thinking about using it for my W40K figures at some point.

The absence of spotting rules and blinds makes the game flow more smoothly than other TFL games.  If you can see it, you can shoot it.

Reservations (not strong enough to call them dislikes)

My only qualm about the game is that because of the absence of cards  it seems to me less suited for solitaire play than either TW&T (wince) or IABSM.   While the idea of the special 6 Command Dice, which allows you to do things such s interrupt your opponent's turn or bring uncommitted sections/teams onto the table to ambush enemy sections/teams in their move is clever, it works better for me in a two player game.   The same thing can be said for the pre-game Patrol Phase.  I'm not saying it doesn't work for solitaire, just that CoC really shines in a face to face game.   For solitaire games, I think I will keep using TW&T.

I haven't tried playing the game since, and would like to try it again with AFVs and artillery.    I would agree with all that has been said on the blogosphere about CoC being one of the significant rules releases of 2013, and hope it had a long future.

Labels: After Action Reports, Chain of Command, Too Fat Lardies