A Fall Visit To Antietam

So as I was saying recently on my other blog, the God Blog, my first term of graduate school has kept me busy.  There were a few games that I managed to get in, which gave James Manto and I much mirth, but mostly a lot of reading and writing and only a little painting, none of which I am ready to show off here.

One thing I did manage this fall, which I think is relevant to this blog, was to travel south to the National Park at Antietam, MD, in the company of a friend from reenacting days, Kevin, and his son (my godson), Brendan.

It was a warm day in early October, and the place looked more autumnal than it would have on Sept 17, 1862, when most of the trees were still green and leafy and the crops, particularly the infamous corn, had only just started to be gathered in.

This shot was taken by the visitor centre.   in the background, behind the canon, you can just make out the observation tower by the Bloody Lane.   Not far beyond that tower is Antietam Creek, with the hills of South Mountain visible in the far background. 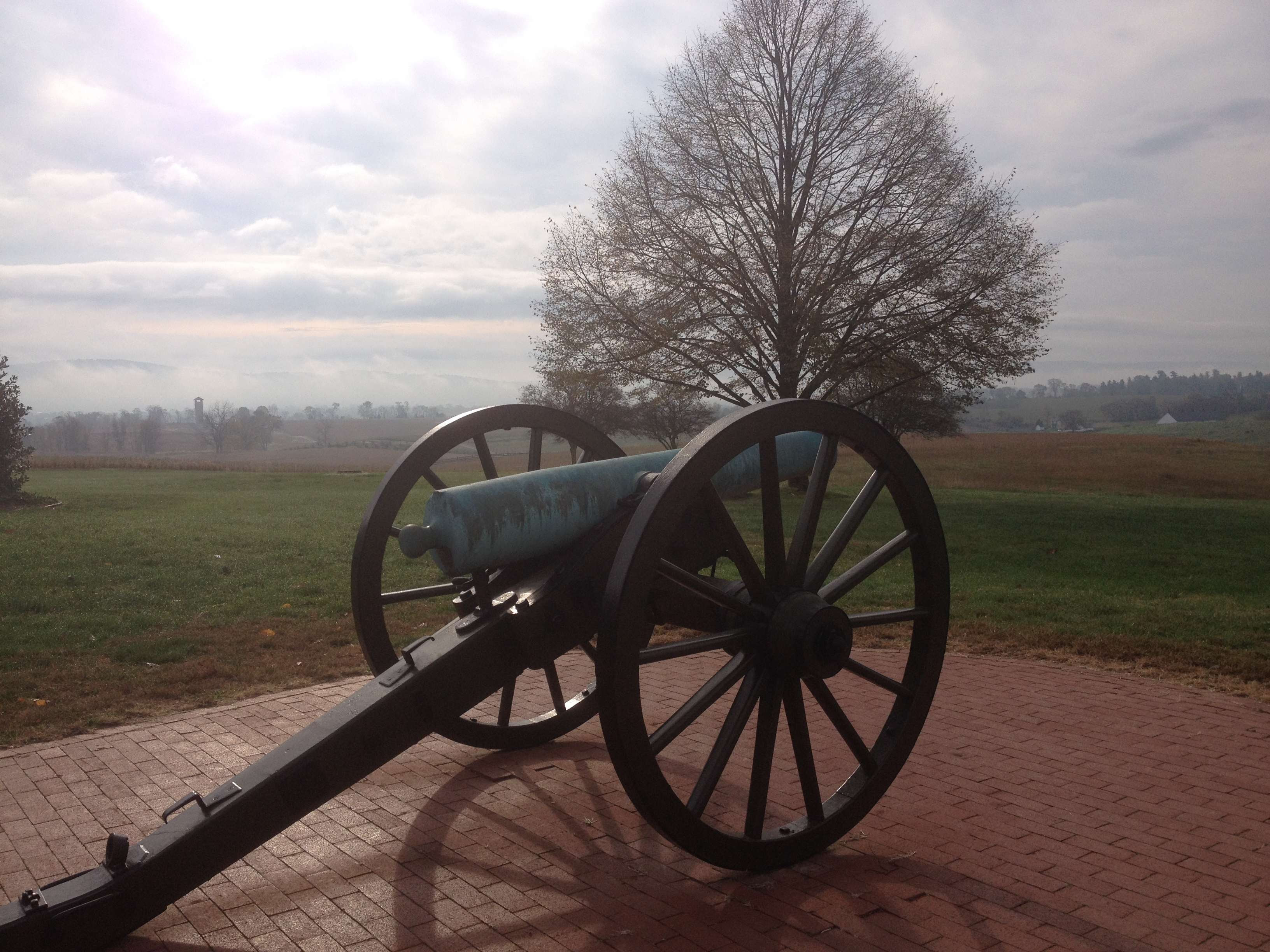 Brendan and his godfather outside the visitor centre.   Brendan and I were both wearing dinosaur themed Tshirts, so we decided that our tour was happening on "Walk and Talk Like a Dinosaur" day.   Brenday knows more about the civil war than most eight year olds - for example, he knows the difference between a Napoleon and a Parrot cannon.   He comes by this knowledge thanks to having a huge ACW nerd as his dad, though I have to admit, Dad made an excellent and knowledgeable tour guide. 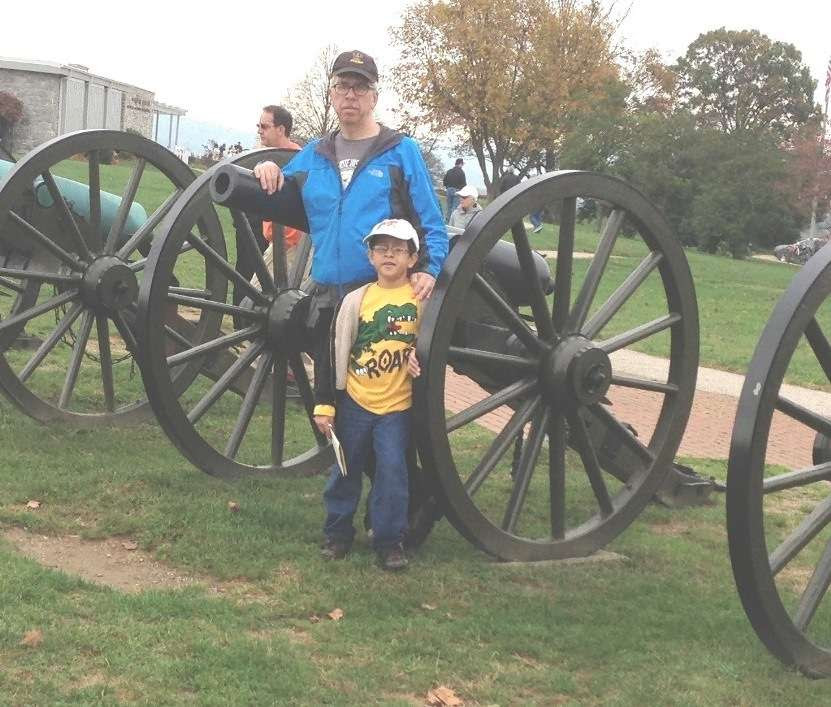 The Dunker church.  Matthew Brady's famous photograph of wrecked Confederate artillery and dead artillerists was taken not far from this spot.

The famous cornfield, with the East Woods visible to the right.  James MacPherson writes in his Antietam book, Crossroads of Freedom, that "Many cornfields were the scene of fighting during the Civil War, but this one was ever after known as the Cornfield."  Here elements of Hooker's and Mansfield's Union Corps collided with the Confederate divisions of Stonewall Jackson, and storied units like Hood's Texans and the Iron Brigade annihilated each other.   Here, as one soldier of the 6th Wisconsin described it, "Men, I cannot say fell; they were knocked out of the ranks by dozens" (MacPherson, Crossroads, 115). 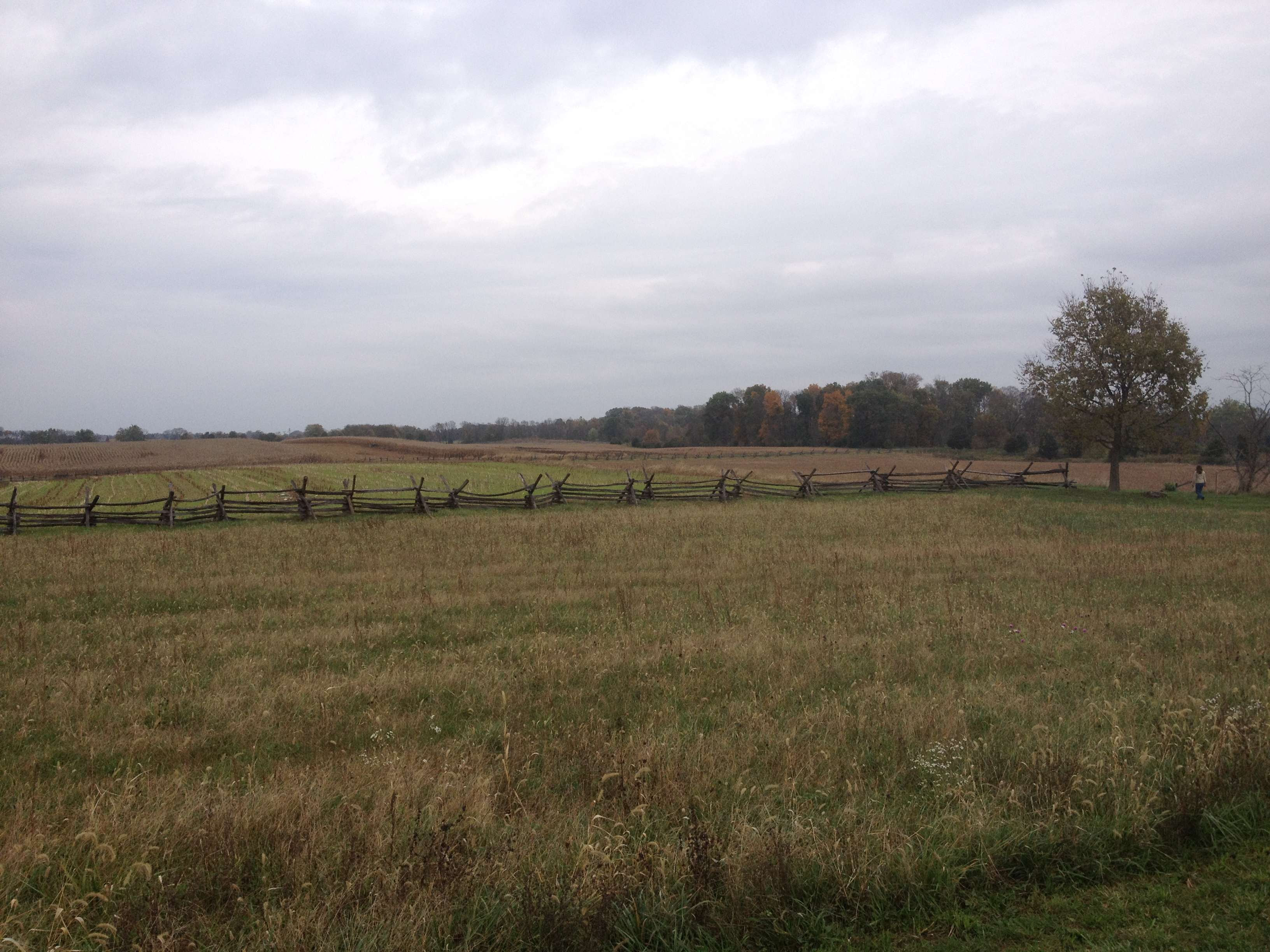 The Bloody Lane, a natural trench which appears, choked with corpses, in Alexander Gardner's famous photograph.   This view is taken looking towards the visitor centre, with the observation tower directly behind.  One thing I noticed walking the cornfield to the right of the photograph is that there is a hill in the centre, so that the Union brigades attacking through it towards the Lane would have been concealed from sight until perhaps 100 metres from the Confederates lining the fence rails.   At that range, in their massed formations, it would have been difficult for any shot to have missed. 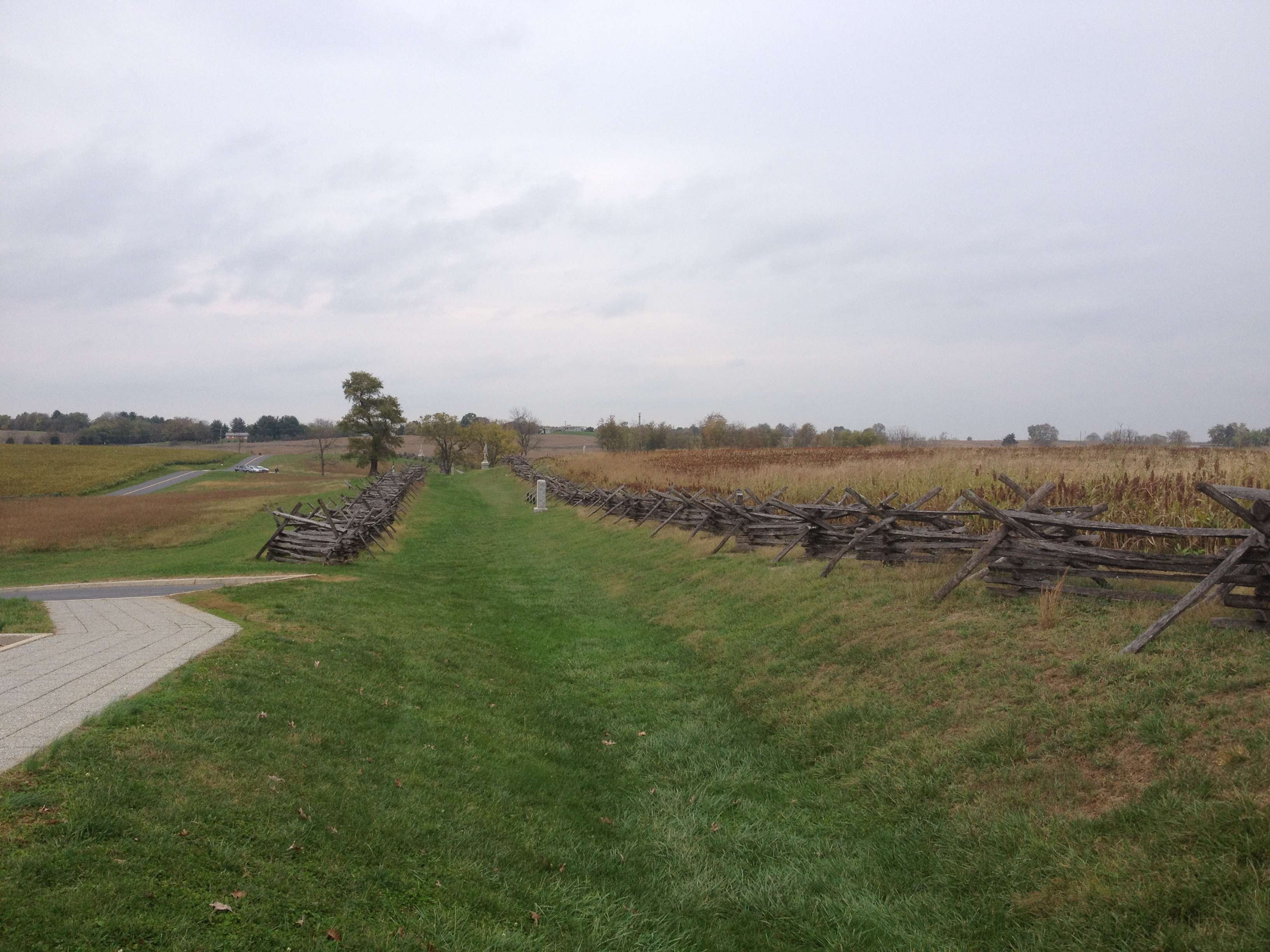 Monument to the Irish Brigade at the Bloody Lane.   By an odd and sad coincidence, we learned that the sculptor of the bronze bas-relief on this monument, Ron Tunison, died on 19 October, just a few days after out visit. 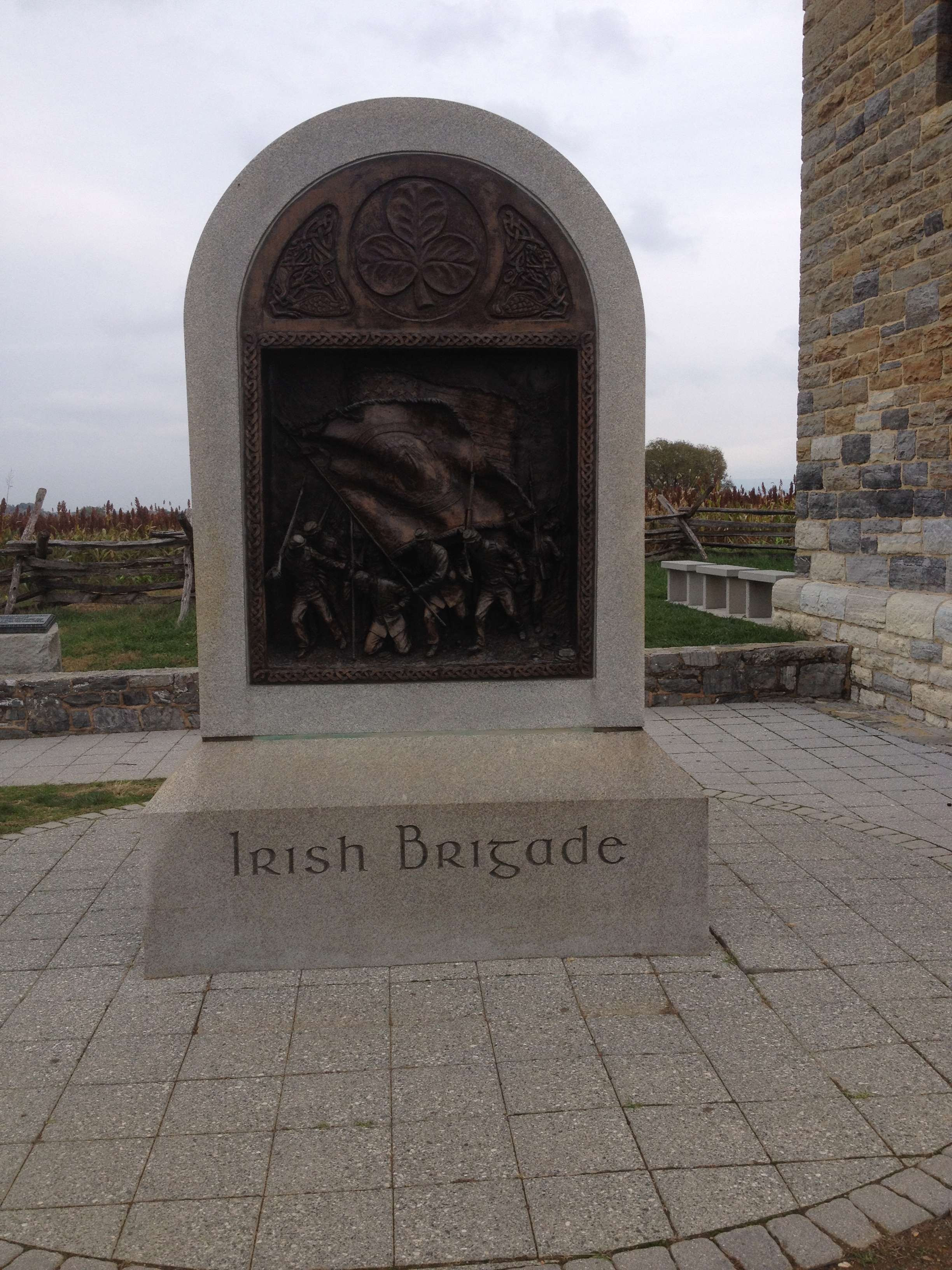 Mr. Tunison's work.  He was a talented gentleman. 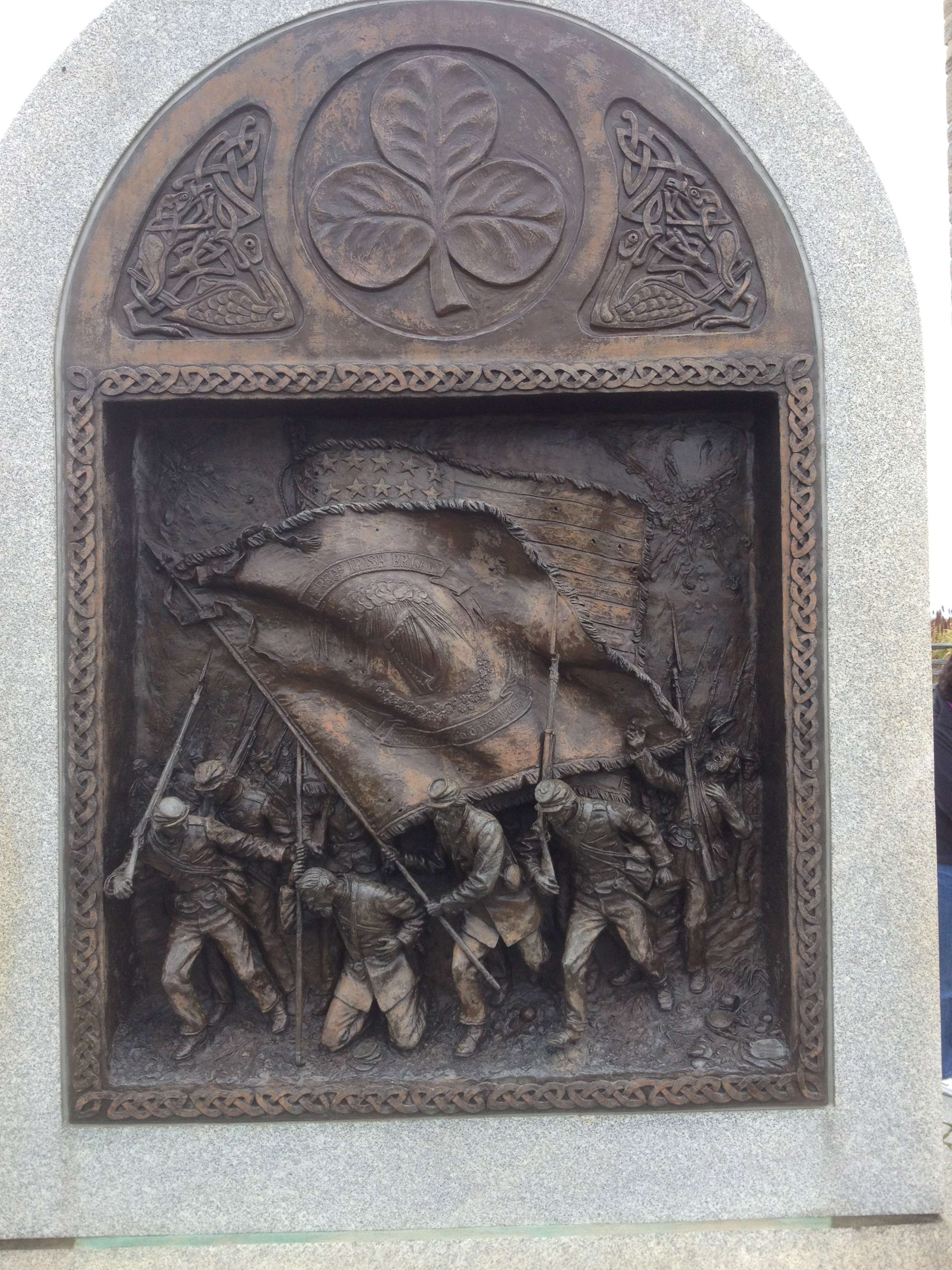 This picture was taken from the grounds of Union commander McLellan's HQ at the Pry House, on the east side of the Antietam creek, looking west towards the cornfield and the East and West Woods.   McClellan never stirred from these grounds during the battle, relying on couriers and signallers to manage the battle.   You can judge for yourself how effective a 19th century commander would have been in such a position, managing a battle a mile distant.    In his Antietam book, Landscape Turned Red, Stephen Sears calls McClellan a spectator of the battle, and quite rightly so, I think.   McClellan never managed to send more than 20,000 men into the fight at any one time, despite outnumbering Lee's Army several times over during the whole battle.  By contrast Lee managed the battle directly, positioning himself directly behind his iines and using the turnpike to move and see the situation as required. 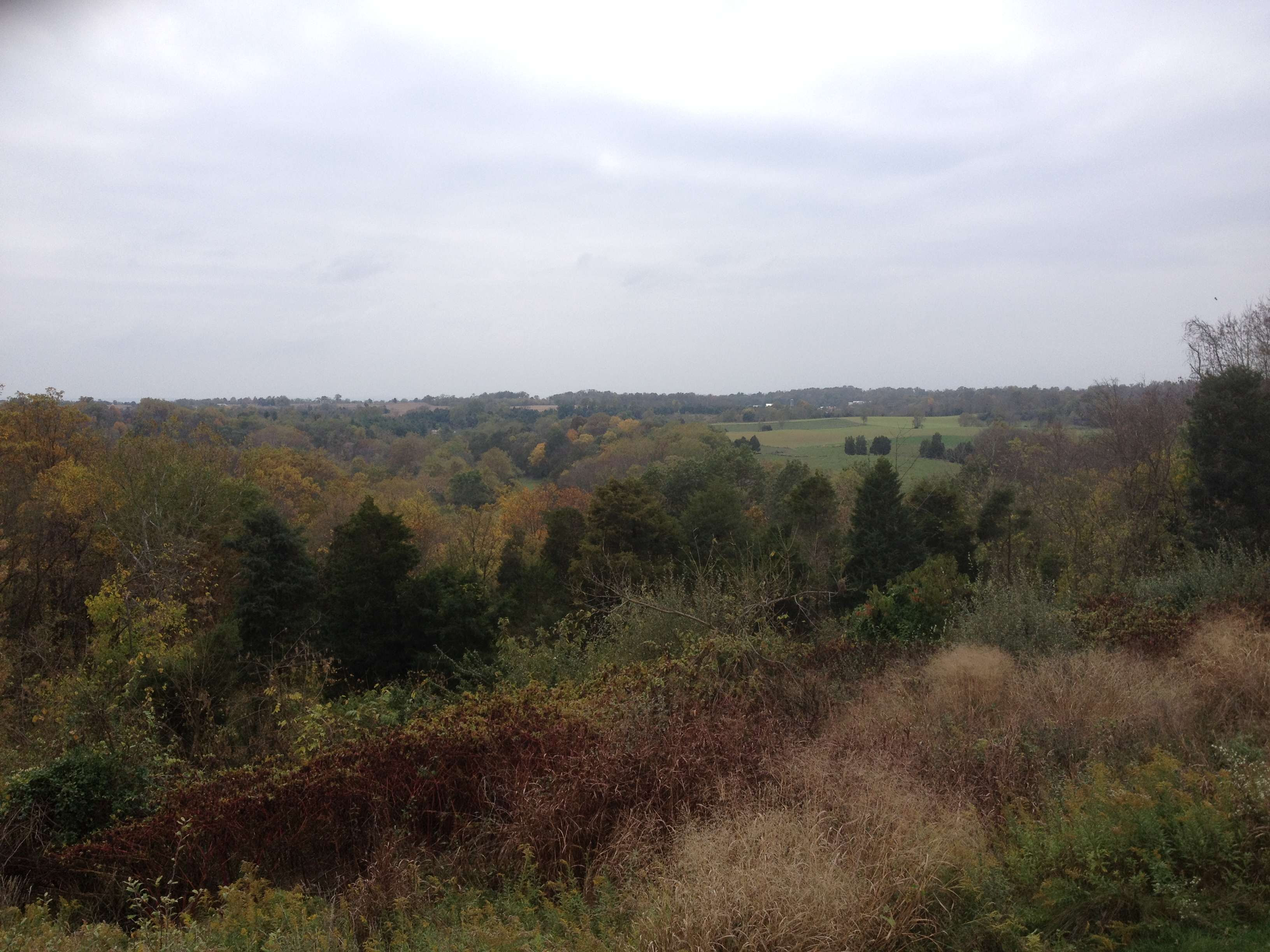 The famous Burnside Bridge, seen from the heights on the west side where a handful of men from two Georgia regiments were able to hold up Burnside's IX Corps for several key hours, allowing A.P. Hill to march from Harper's Ferry and halt Burnside when he finally crossed the bridge and threatened Lee's right wing late in the day.  From this range, it's hard to imagine a trained and experienced shooter, as those Georgians must have been, from missing his target. 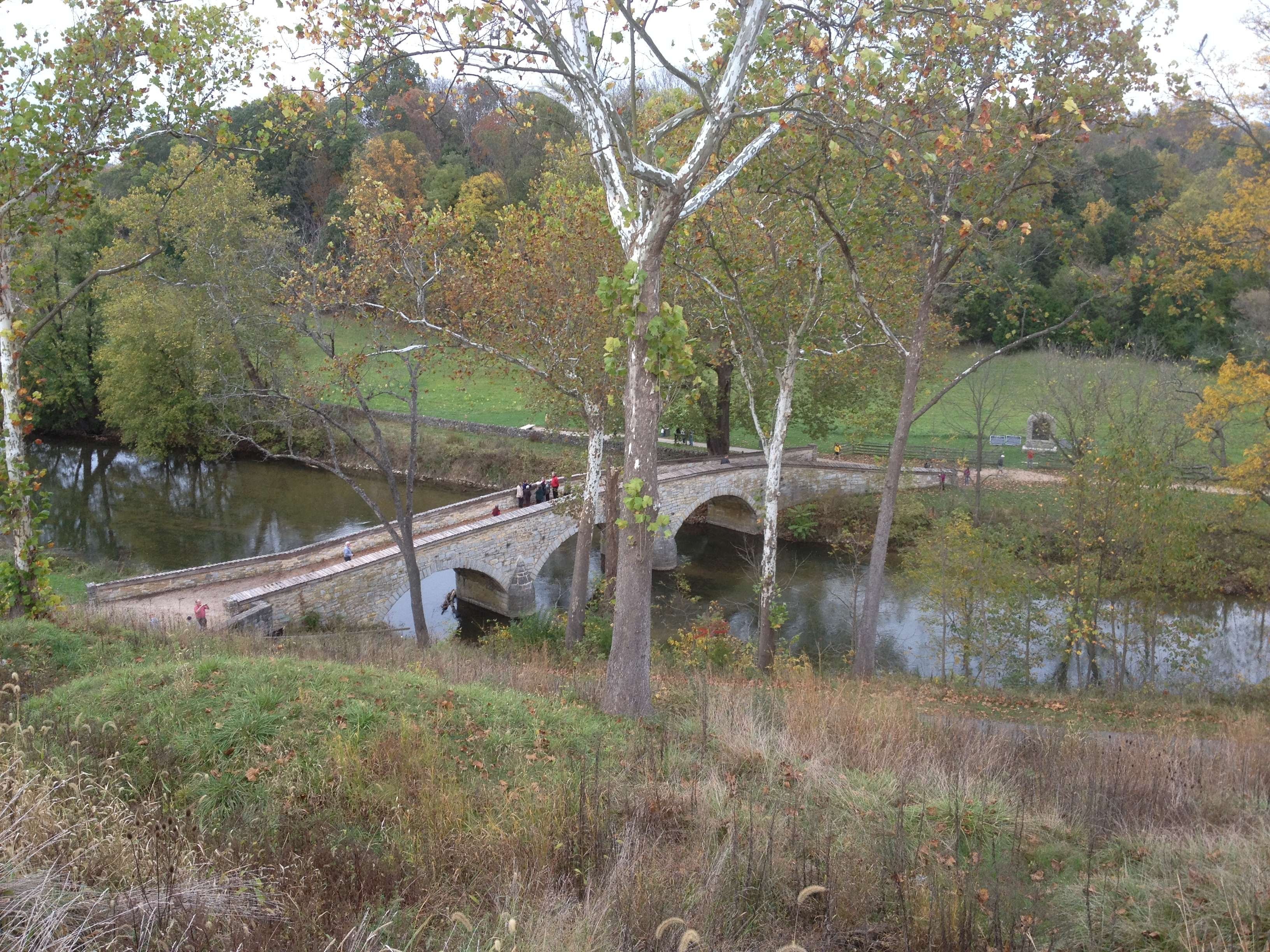 A view across the bridge.   Would you be brave enough to dash forward across this, through a hail of minie balls? 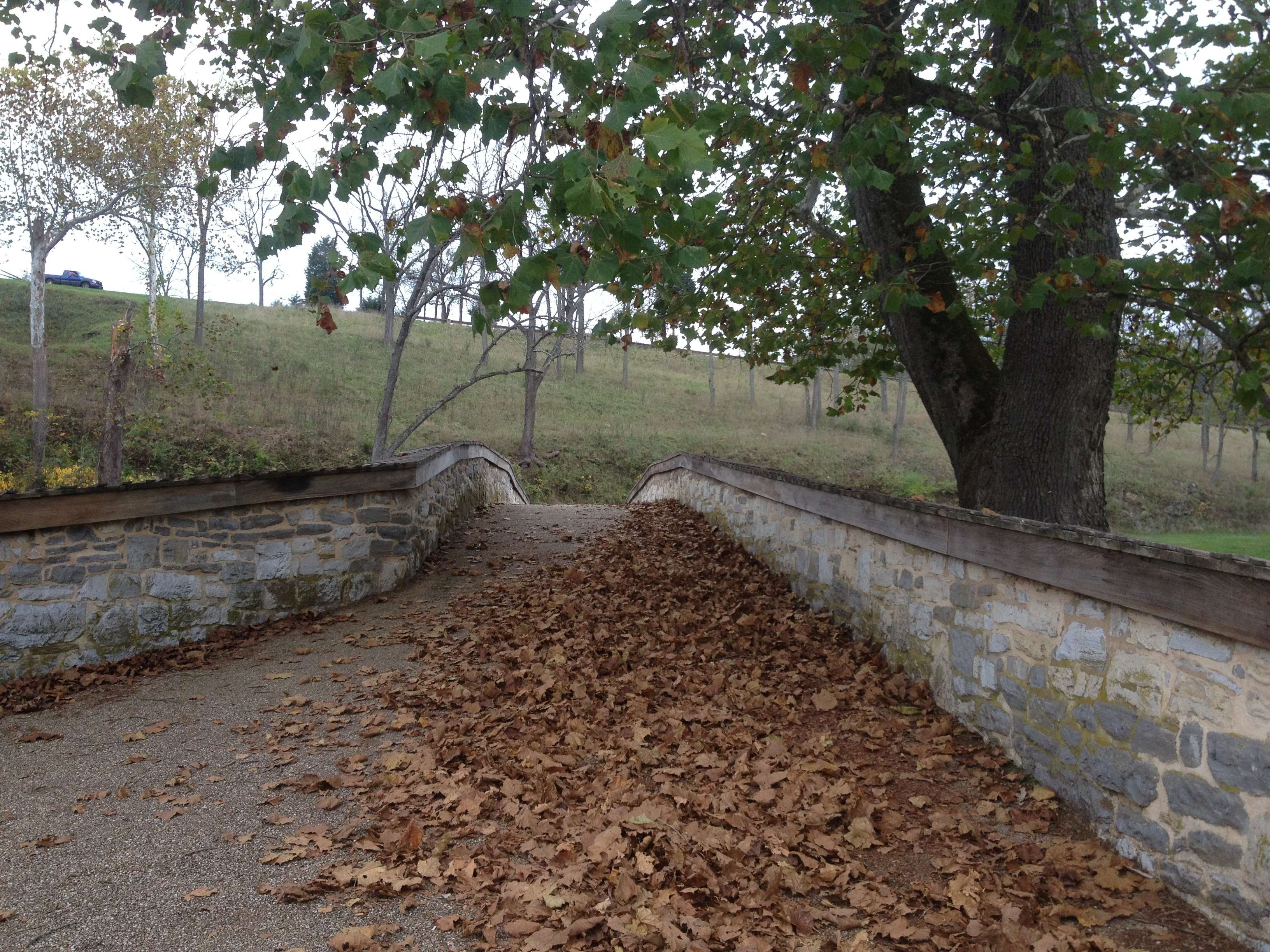 A view of the McKinley Monument, near the Burnside Bridge.   I took it because I thought this comely lass was fetching, though her manner was cold and stony and did promise any dalliance.   McKinley was one of two future US presidents to serve in the Union army at Antietam, the other being Rutherford Hayes. 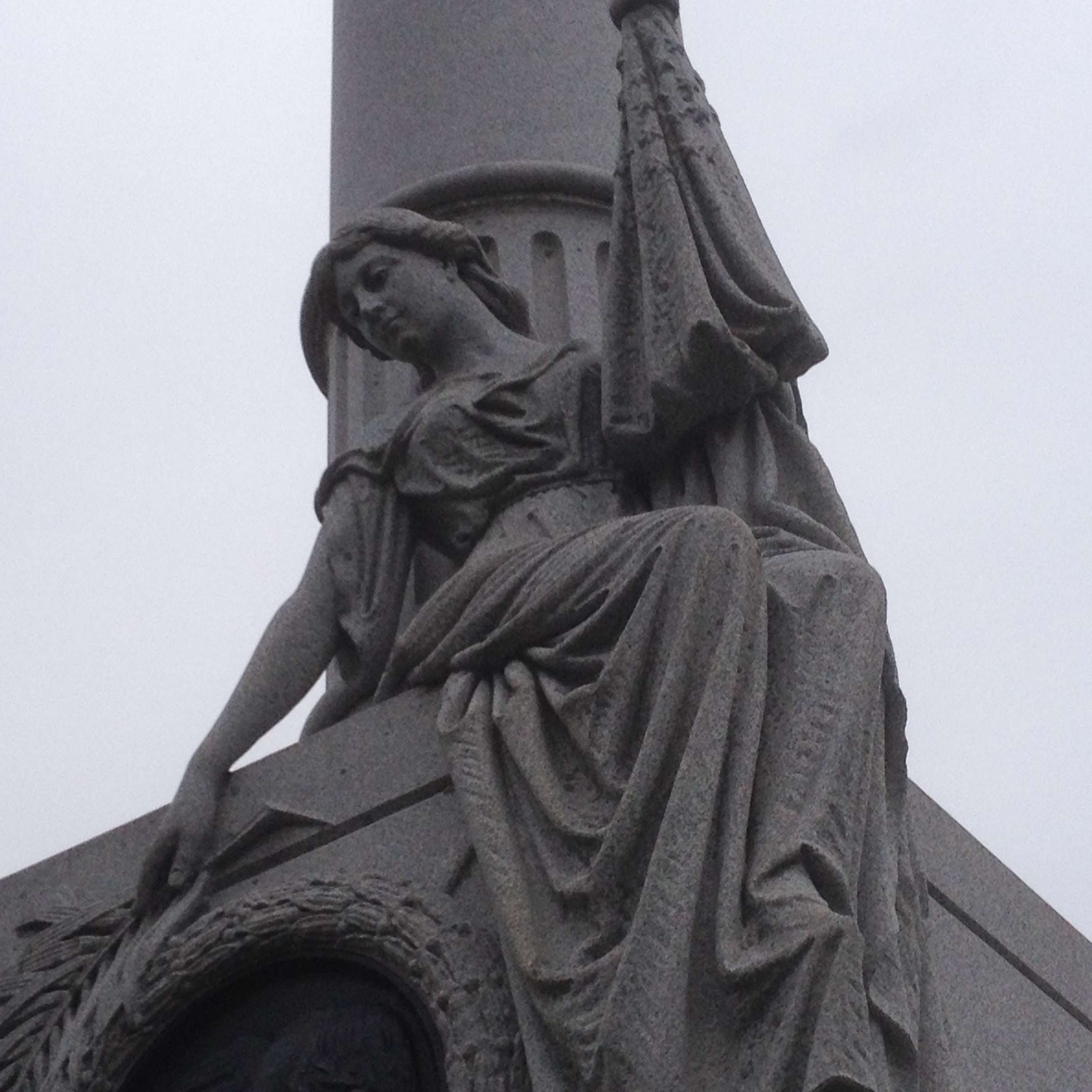 The day after our Antietam tour, before we headed home, Kevin and I visited several of the battlefields that are collectively known as South Mountain.   After he was fortunate enough to learn of Lee's dispositions thanks to the missing orders intended for D.H. Hill, McClellan had the means to destroy the Confederate army in detail, but moved sluggishly.   The next day, Sept 14th, after a long delay, he moved against the small rebel detachments holding the three passes through the chain of hills called South Mountain.  This handsome monument at Fox's Gap remembers the North Carolina troops that tried to hold long enough to buy Lee time to regroup.  They might have died in vain, if McClellan had not been more aggressive, but he waiting until the 17th to attack Lee at Sharpsburg/Antietam.  We found this monument after a long walk through some woods, and it was worth the searching.   A Union Corps Commander, Jesse Reno (IX Corps) and a Confederate Brigadier, Samuel Garland, died near this spot on the 14th. 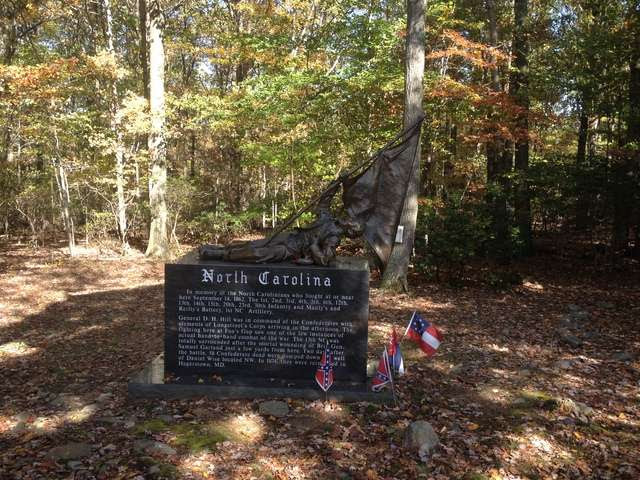 One last picture.   This stone church is found at the summit of Turner's Gap on South Mountain, another skirmish that occurred on 14 September.   I knew nothing about it until I stumbled on it.  It's called the Dahlgren Chapel, built in 1881 in honour of the wife of the Union Admiral John Dahlgren, and for a while was a Roman Catholic chapel.   I j had the chance to walk around it and peek inside the windows.  A lovely place in the Gothic style that is still available for weddings, if you want to get married in Maryland. 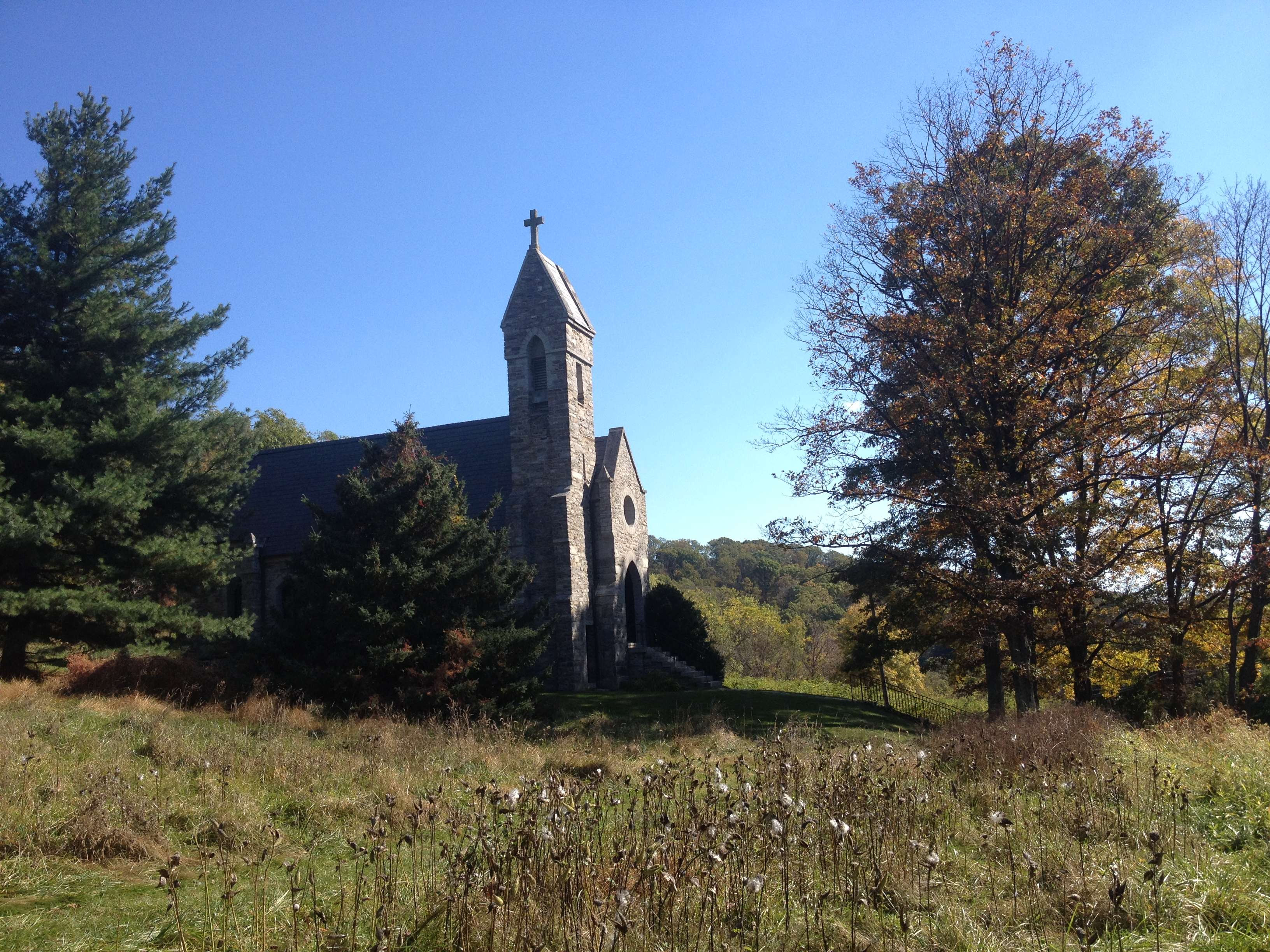 If you are interested in Antietam, I would recommend two books, both mentioned above.  One is James M. McPherson's Antietam: Crossroads of Freedom, a short book that sketches out the battle but does a brilliant job of situating it within the political and military context of 1862.   If you want a blow-by-blow account of the battle, Stephen Sears' Landscape Turned Red is the book for you.   McPherson notes that this battle may well be the most important of the Civil War, because it was the victory that made Lincoln's Emancipation Proclamation possible and thus ended any chance of a pro-Confederate intervention by the great powers of Europe.   While Gettysburg has military significance, Antietam, one could argue, is the battle that effectively ended slavery and thus changed American history forever.

It's impossible not to walk this battlefield and read about it without concluding that McClellan lost it may times over.   Had he been anything like Robert E. Lee, he would have smashed Lee's army, instead of giving it time to gather and fight for its life.   At every turn, Lee and his generals were active, vigorous, courageous and effective.   By contrast, McClellan's generals were mostly ineffective, timid, or disgruntled with one another and with their commander.   This is a problem that any war-game simulation of the battle has to model, for if the Union player representing McClellan has freedom of action, the battle is pretty much a foregone conclusion.   That is the problem addressed in SPI's famous Antietam monster game,  A Gleam of Bayonets, which sits on my shelf awaiting its moment.  Perhaps when I retire.