Handsome Hans And The Nasty Nazis

Christmas last Madame Padre gave me a bunch of two-fisted figures from Bob Murch's Pulp Figures range for my Weird War Two project. I liked the somewhat cartoonish quality of Bob's Nazis and I thought they would be the perfect minions for my occult Nazi leaders and monsters, and useful cannon fodder for battles with "S Commando". Here's my first test figure from this lot, "Handsome Hans". 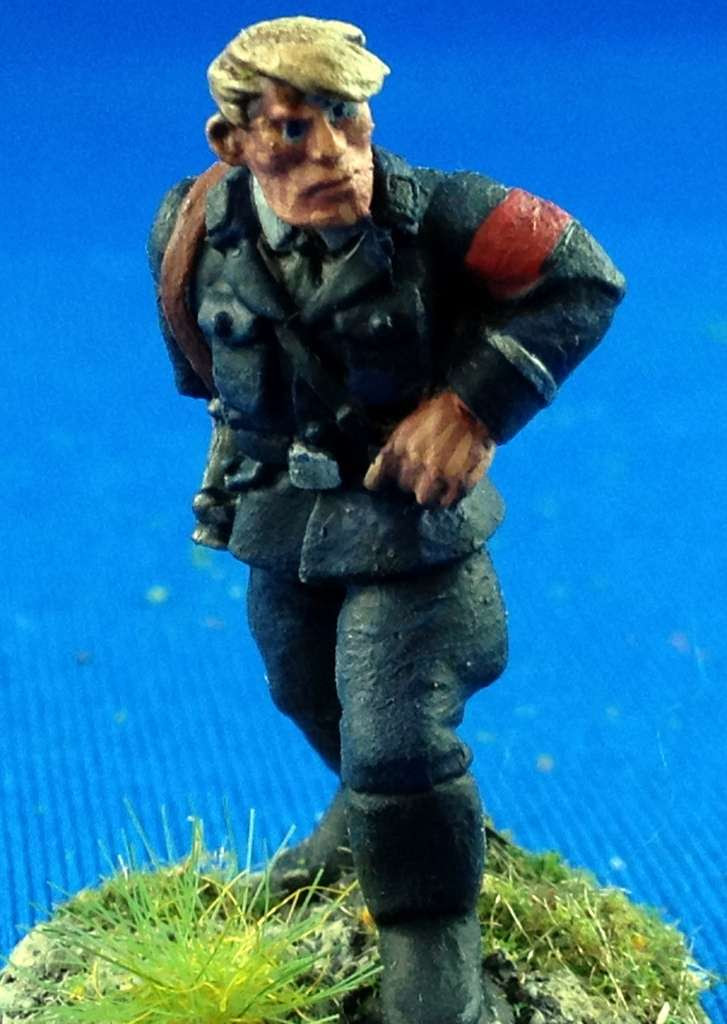 There are a few things about my paint job for this guy that I would be grateful, dear reader, for your feedback. First, because I fear I don't fully understand the art of painting black clothes, I gave him a base of black but then dry brushed him using a colour called "Midnight" (basically an indigo) from a craft paint line called Folkart. I rather think the net result looks too blue, rather like a Union blue from the ACW period rather than SS black. Do you think the uniform is too blue?

Secondly, you will note that Bob has sculpted a swastika armband on the figure's arm, and that I have painted it red but have not added the white circle with the swastika in the centre. The reasons for this are twofold. The first reason is that I fear a swastika is too fiddly to paint well. Second, and more important, I'm not sure I really want to paint one. I am mindful of some forums, such as Lead Adventurers, that don't allow Nazi symbology since they hosted in Germany and abide by German law, not that I post a lot of my work on that forum but I might want to. More to the point, and this goes back to an earlier post I did on Weird War Two and ethics, I think it's plain that my bad guys are intended to be minions of the Third Reich without having to paint a symbol I find repugnant.

I've been giving some more thought as to the kind of alternate reality I wanted to create with Weird War Two. At first I think I envisioned it as "Hammer Studios Meets Allo! Allo!". The charm of the Hammer films, which terrified my dreams when I was a young teenager was that they were campy, low-budget, set "somewhere in Europe somewhere in the past" and didn't take themselves overly seriously.

Allo! Allo! never took itself seriously. If you could accept Nazis as harmless clowns, you got the joke. If you couldn't accept that premise, you probably didn't watch it.

I'm just not sure that I want my Weird War Nazis to be that silly. Recently Madame Padre and I recently discovered the 1970s era ITV series, "Enemy At the Door", about the German occupation of the Channel Islands. In this show the Nazis are definitely not clowns. In fact, they can be downright scary, in part because the decent German types, like the Commandant, are decent men trapped in an evil system. If you have a moment, watch the contrast in this episode between the Commandant, Major Richter (played by Alfred Burke) and the SS Haupsturmfuhrer Rienicke (Simon Cadell), who would pull Cafe Rene apart in a few days.

So for now I'm thinking no swastikas, but scary Nazis - just, hopefully, not too blue Nazis. Thoughts?