Still on holiday in Newfoundland, and while I didn't bring anything to paint with me (that would have been courting severe disapproval or worse from Mrs. Padre), I can still blog when not worn out from all the hiking, beautiful scenery, and excellent seafood.
Here is the last figure in the core group of my Weird War 2 vampire hunting task force, S (Supernatural) Commando. 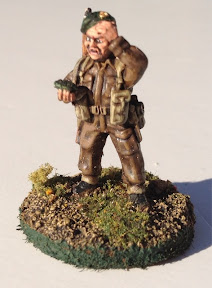 Like the last figure, Capt. Richard (Dicky) Byrd, this figure is also from the Warlord Games Christmas Surprise pack, a tribute to the Too Fat Lardies personalities. The sculpt shows a British soldier looking stupidly at a grenade. Either he doesn't know how to use it, or he's wondering how it got in his Christmas hamper. Either way, it was also a treat to paint. I gave him a green commando beret and a set of the shoulder flash decals that came in the Warlord Commando pack I bought for this project. 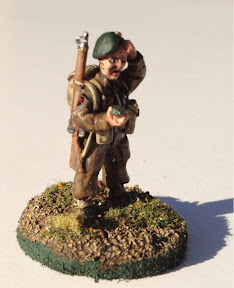 When Brigadier McAllister was putting together his team, he realized that someone as undisciplined as Capt. Byrd would need a minder. He also knew that any team needs a strong, useful chap to make the tea and kill the odd Jerry. An simple, unimaginative type might also be better suited To resist the horrors that S Commando might be sent into. 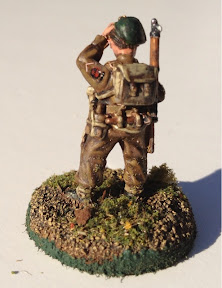 Private Sam ("Snuffy") Snape is a native of Sheffield. As a lad he had a reputation as being strong, good-hearted, and a bit dim. When he was 13 he couldn't take watching Da beat Ma and the little ones any more, and so fractured his father's skull and sent him packing. As the new man of the family, he took a job at the mill as a machinist's helper. For seven years he faithfully turned his pay packet over to his beloved mum, and because of his Da's example he has never touched a drop.


In 1939 Snape was called up to and was assigned to the 1st York and Lancaster regiment. He got the nickname "Snuffy" for his homesick reactions to the letters sent to him by his Ma, as well as for his sympathy for stray and hurt animals. The lads soon learned that Snape was a simple but good hearted bloke, who would only use his fists to sort out someone who cheated or abused a mate. Soon the lads were entrusting their valuables to Snuffy before going out on the town.


Snape was assigned to the battalion's Regimental Aid Post as an orderly, a job considered to be fitting for what was officially considered to be his limited Intelligence and abilities. When the R.A.P. was overrun during the Norway campaign, Snape returned from a fatigue detail to find four Germans pointing their weapons at the MO and wounded, and making threatening gestures. Enraged and armed only with a shovel, Snape killed three and sent the fourth running. Afterwards he said to the Colonel that "it made me right cross to see the doc and the poor lads treated badly. Well, sir. It weren't right, like".
Returning from Norway, Snape was surprised to learn that he had been put in for a Military Medal and was being posted to the Commandos. He doesn't like the thought of leaving his mates in the Yorks and Lancs and is wondering if he did something wrong.

Next figures up in this series - Jerries, sinister and otherwise!
using BlogPress from my iPad