As promised in my last post, here is the Union take on the first completed game day of the ACW play by email campaign I am running. Incidentally, if you are reading this and would like to participate, check out the links in this post, and then, if you are still interested, email me offline at madpadre@gmail.com.

The first piece from the Union's point of view appears here. Mr. Wolfgang Blitzed, is an embedded reporter with the Union forces operating against Bluffsburg. He has been assigned by his newspaper, the Chicago Star, due to the high number if Illinois troops in Moore's Division, as well as the fact that General Moore himself is a Prairie State native.

Once again, here is the campaign map showing the close of play for the first day, 25 June. A minor correction, the force shown occupying Brice's Ferry, just across from Jefferson City at the top of the map, is from Hemmings' brigade of Moore's Division, not Clapp's as shown. A few more comments on the map. In the campaign mechanic, land movement is from point to point. Battles are resolved when opposing forces meet at one of these points. Naval movement is a little more abstract. Possession of towns is shown by colour, with blue indicating Union control and red indicating Confederate control. Bracketed numbers beside each town indicate victory points. There are no victory point values for Bluffsburg and Jefferson City. The game ends automatically if either of those key towns is captured. 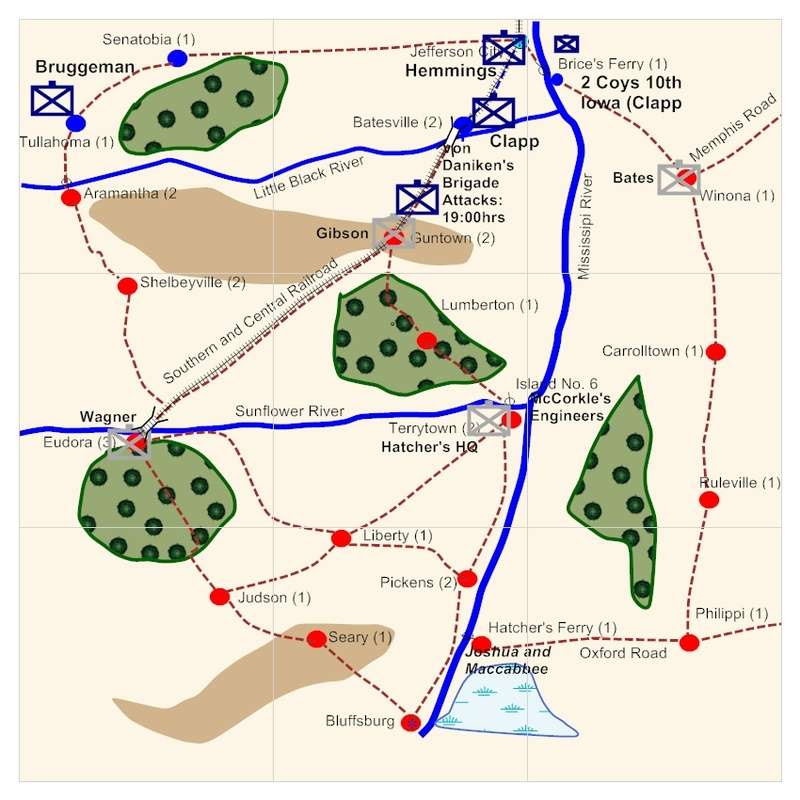 Today has been a day of bold movement and activity for the Union army and navy here in Bluffsburg County. It would appear that General Moore is desirous of the opportunity to shake off his underserved reputation for the "Shilo Slows", and is thus acting with energy and aggression in his task to capture the rebel stronghold of Bluffsburg. The summer weather in these parts is sultry, and the morning came, cloudless and with the promise of unrelenting heat. Before the cruel sun rose high, Moore's forces were on the march. The First Brigade of Col. Ulrich Von Daniken led the way south towards Batesville, followed by the Third Brigade of Col. Theodore Clapp.

Von Daniken is an Illinois man, and well known to residents of his native Springfield, where his parents immigrated and became successful merchants. A professional soldier and West Point graduate, with honourable experience in the Mexican War, he has done marvels in helping General Moore to mould the many raw troops of his division into a formidable fighting force. Before he left, Von Daniken showed me his orders from Gen. Moore: "Colonel, you will proceed with all haste along the rail line to Eudora. You must reach Eudora within 3 days at the latest. Capturing the bridge at Eudora intact is the key to the campaign." "I will not fail in this endeavour", he promised me, and the sight of him cheering his brigade in the early morning light was inspiring to behold. 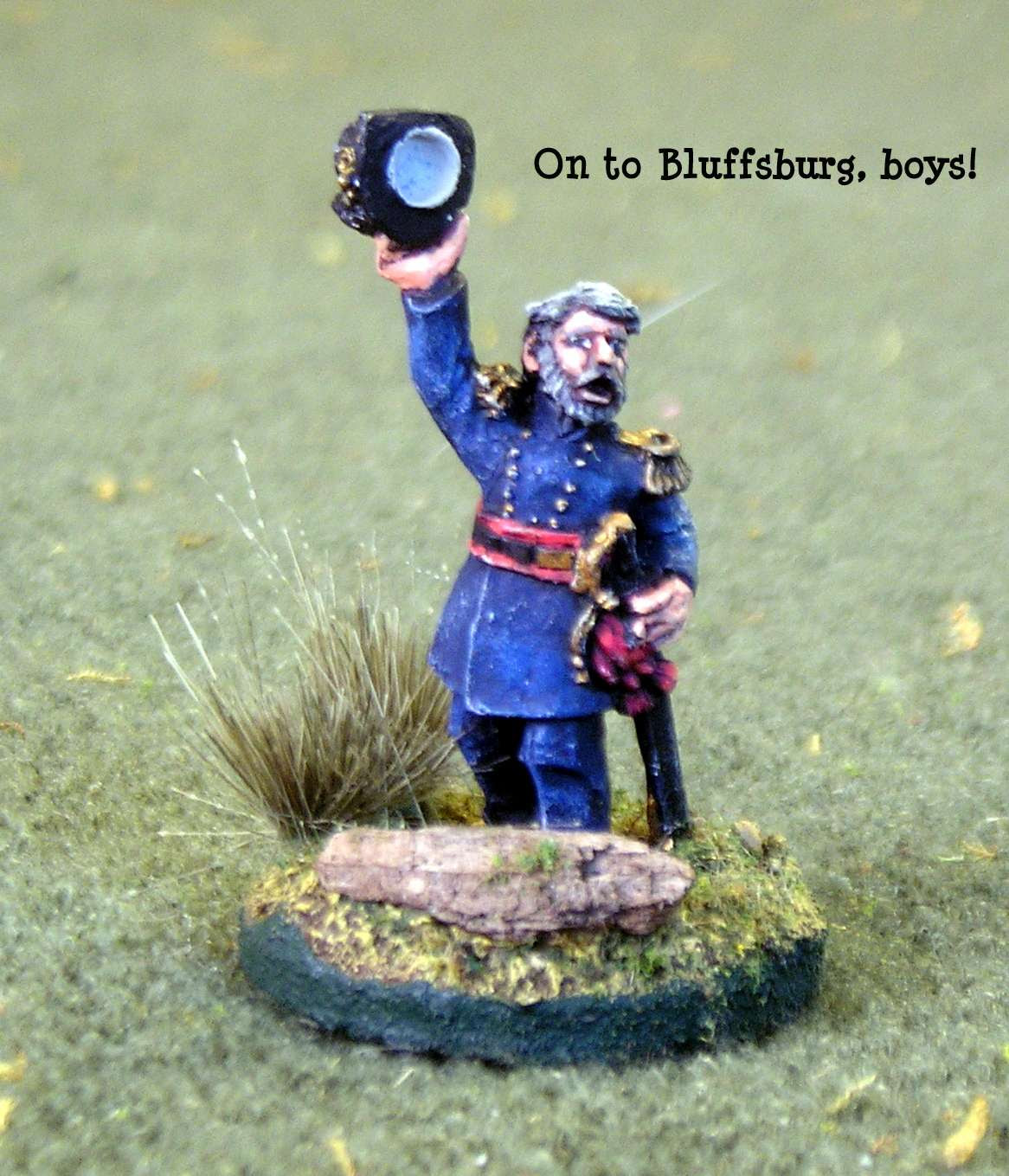 By midday, Von Daniken's troops had reached the outskirts of Batesville, led by the 9th Indiana Cavalry, given to First Brigade by Gen. Moore from Col. Bruggeman's cavalry brigade. While the 9th is a very new outfit, the novice Hoosier horsemen were not fooled by a battery of log cannon which guarded the north side of the bridge. Johhny Reb himself was nowhere to be seen, and Batesville fell without a shot. By now the heat had climbed to 90 degrees under a cloudless and burning sky. All troops were covered in dust and sweat-sodden clothing. The westerners from Clapp's brigade were visibily suffering from the march, and so Col. Clapp received orders to rest his brigade there and garrison Batesville for the remainder of the day. Reports from the morning had advised Gen. Moore that the rail and telegraph lines between Jefferson City and Batesville were intact, and appeared to be in good repair. Realizing the advantage of having these assets, Gen. Moore ordered an engineering detachment to begin a survey of this route to advise him whether the rail and telegraph could indeed be used to advantage.

In Jefferson City all was not idle. The Second Brigade under Col. Andrew Hemmings was detailed by Gen. Moore as his divisional reserve. With the help of B Coy of the 9th US Engineers, they began to erect field fortifications on the western side of Jefferson City, and guns of Battery C, the 11th US Artillery, were emplaced there to check any Confederate advance coming along the Senatobia road. That threat did not appear likely, however, as Col. Bruggeman with his now depleted brigade, consisting of the 12th Illinois Cavalry (Sandhill Dragoons) and Battery C, 3rd US Horse Artillery, had departed for Senatobia at first light. Late in the day, we received word from Col. Bruggeman that he had found Senatobia empty of rebels, although again they had tried the tactic of emplacing wooden cannon. The Secesh axemen should have saved their labour, as our men were not fooled. The last word from Col. Bruggeman is that he was pressing on to seize Tullahoma.

From their quays along the river in Jefferson City, the flotilla of Captain Edward Holquist made its way downstream under clouds of purposeful smoke. Holquist raised his flag in the ironclad Carondelet, followed by her consort Ironton, and escorted by the tinclad gunboats Sardis and Chaffee. A considerable amount of transport, along with the gunboat Golconda, remain at their moorings.

In the early evening, however, there was motion and activity as "A" Company of the 10th Iowa from Second Brigade marched to the quays, accompanied by Col. Hemmings. Col. Hemmings, a young and vigorous gentleman who joined the colours in Chicago with many employees from his family's stockyard business, is determined to learn the art of war in the theatre of battle. He confided to me that since General Moore had tasked him to secure the area of Brice's Ferry on the far bank of the Mississippi, he would do so in person. Accordingly, he embarked on the riverboat Celtic Star along with Captain Anderson, commanding A Co of the 10th, leaving orders that B Co of the 10th, under Capt. Bertwald, would follow in the morning. His orders to Anderson were that:

"At first light June 26 you will pass through Brice Ferry and on to Winona. If Winona is found to be secure, leave a small group as outpost and return here. If Winona is held by the enemy, send word immediately, then scout for strength, disposition etc."

Your devoted correspondent was invited to accompany this expedition. The Celtic Star was escorted by the USS Golconda, commanded by the enterprising and aggressive Lt. Obadiah Windspear, a descendent of Marblehead fishermen from New England, now pying the muddy Mississippi. Forewarned of the Rebel fondness for dummy batteries, Windspear was not fooled by what appeared to be field artillery on a high point above the river, and signalled the Celtic Star to go in and land. Just before 6pm, gallant Hawkeye troops jumped from the bow deck of the steamboat, pushed forward over 50 metres of muddy beach, and began to form up under fire. A sharp skirmish followed, as the Hawkeyes fought to clear a beachhead and push on so that more of their number could land. An early group under Sgt. Snaith of A Coy took grievous losses and ran for the cover of the steamboat when their sergeant fell, but Col. Hemmings took the lead and drove his men forward. Golconda contributed the weight of her cannon, silencing the rebel riflemen on the hill where the fake battery was observed. 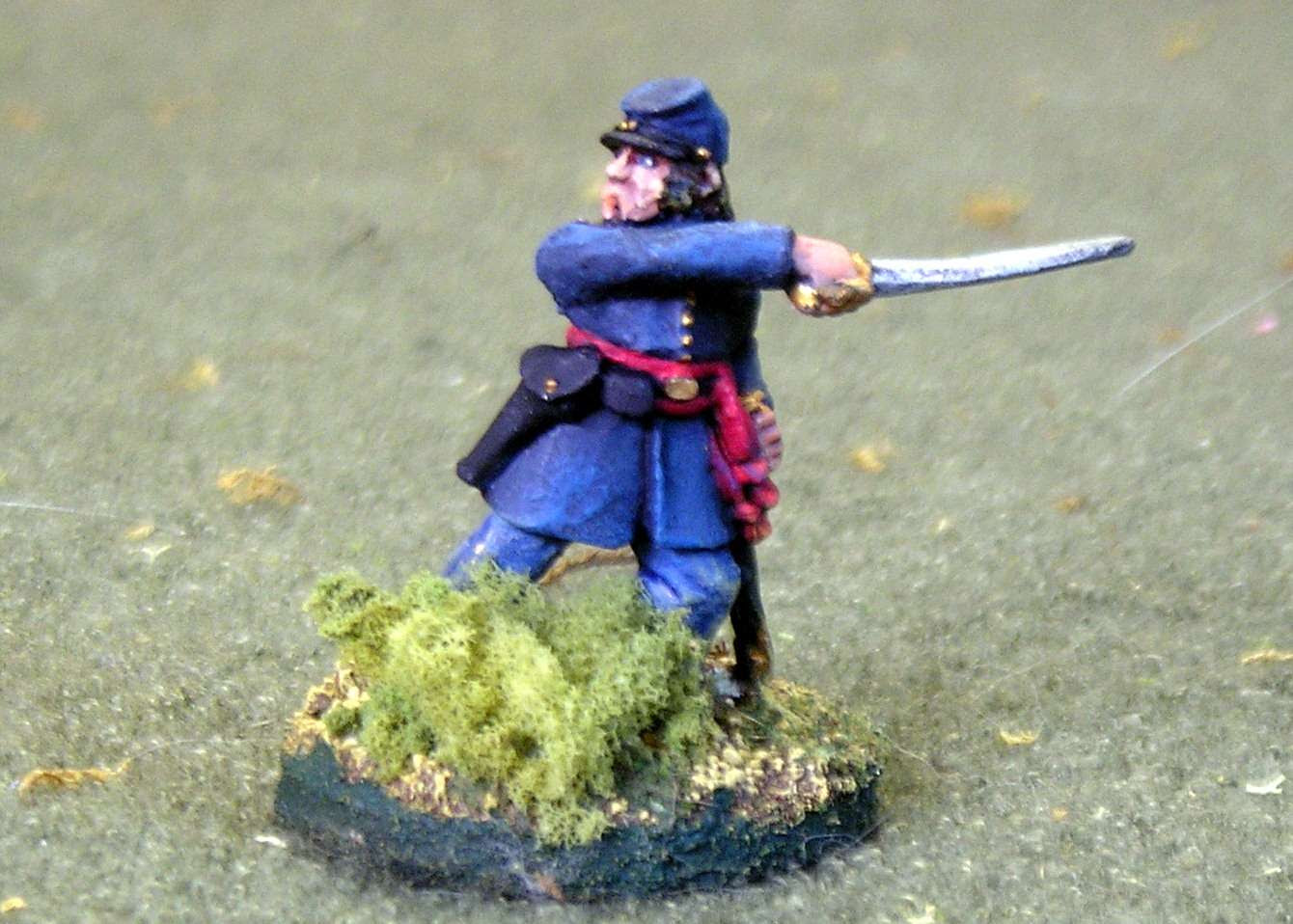 Col. Hemmings leads his men forward at the battle of Brice's Ferry. 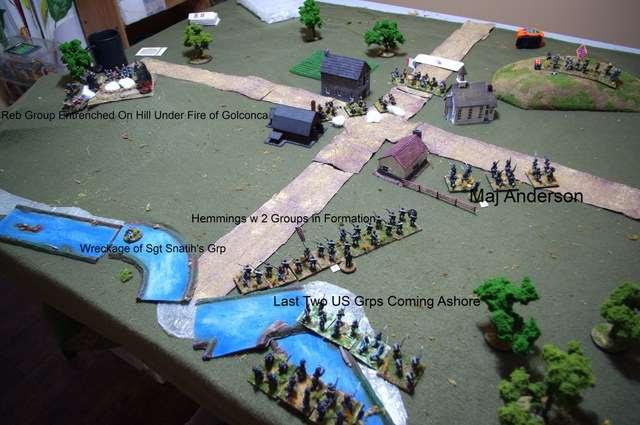 One of the sitreps of the battle forwarded to the Union player who is Hemmings. For this battle, which was about a company per side, I used the TFL rules Terrible Sharp Sword, an ACW expansion for Sharp Practice, and they worked quite well. I controlled the rebel side and gave the Hemmings player regular updates with chances to make decisions and give new orders. The battle ended with dusk at 20:00 and nightfall at 20:30 preventing further firing. The rebel pickets, Arkansans under Capt. Hannan, withdrew to high ground around Brice's Ferry and sent word to Col. Bates of the attack. The Celtic Star, having unloaded A Coy, withdrew and returned to Jefferson City to bring B Coy in the morning. Col. Hemmings elected to remain with his company of Iowans, now perhaps the soundest choice of a Brigade Commander, but a gutsy one. Golconda remained on station through the night, ready to support action in the morning. Her fire, which I treated as very heavy artillery in TS terms, was infrequent but quite effective in sowing shock among the rebel groups.

(Mr. Blitzed's narrative resumes.) Your devoted correspondent returned to Jefferson City aboard the Celtic Star, whose captain must have the eyes of a cat, as he navigated the dark river without the slightest qualm or error. Upon our arrival, troops of B Coy were itching to join the fight and support their comrades. They will do so at first light. When I departed Brice's Ferry, the sounds of firing were dying down as night fell, and it appeared that Col. Hemmings had won a foothold on the far bank. We shall see what morning shall bring.

As I prepare to telegraph this missive to Chicago, distressing news from Col. Von Daniken arrives. I quote his dispatch in full.

General Moore This evening my advance cavalry patrols encountered a Rebel brigade entrenched on the hills north of Guntown. I ordered a hasty attack from the line of march with the 23rd Ill and the two batteries forming a base. the 9th Ill, 15th Ill and the 29th Ohio endeavoured to enfilade the enemy on our left and roll up his line. The 29th being quite green advanced in considerable disorder and were left behind by the other two regiments. The 15th with the 9th in support encountered a Rebel battery and attacked it to discover that it was supported by an entrenched enemy regiment. Our boys poured in the musketry and then tried a bayonet attack to carry the works. Everything held in the balance but the 15th could not carry the position and skedaddled. The 9th coming up finding all lost followed suit. We have fallen back to regroup and bring in the stragglers. the 15th is badly cut up and it's strenght is not known yet. The enemy is of at least brigade strength with two batteries and they are entrenched upon the hills covering the road to Guntown. I remain, sir, you obedient servant etc. Signed Ulrich Von Daniken, Colonel, Commander 1st Brigade 3rd Division Army of Tenessee

It is too early to have any casualty returns from this action, as there were many Chicagoans and sons of Illinois who may have fallen at Guntown, but I shall endeavour to report this in my dispatch. Until then, may God preserve the just Union cause in this seat of the war.