Minions of the Molemen - A Rugged Adventure

My wargaming chums in SW Ontario (lads, it grieves me to leave ye!) love a subgenre of wargaming called "pulp". Pulp games are based on the comics and penny novels of the 1930s, the era of serialized movie adventures, Dick Tracy and Indiana Jones (back when Harrison Ford was young and the whole Indy thing was fresh) - robots, mad scientists, private eyes and Nazis, and creatures as imagined by H.P. Lovecraft are all part and parcel of pulp.

The game described here happened in late June 2008 at RiCon, a gathering of maniacs, old and new friends, in the basement of the ever-hospitable Rich (Rico Da Barbarian) Brayton and his lovely family. The inspiration for the scenario is from the twisted but beautiful minds of Lorenzo Gionet and James Manto. The writeup below is James Manto's brilliant pen and the captions for the game photos are by Lorenzo. The figures are from their collection and include figs by Ironwind, Steve Barber, Bob Murch, RAFM and Moonstone. Buildings are either scratch built or from model railroad scenics, and the vehicles are from toy stores and flea markets all over SW Ontario. God knows how many players there were - dozens? It was like a Jimmy Cagney/Jackie Chan movie directed by James Woods and produced by James Woo.

Cue the saxophone background music and shot of a dark, rainslicked city street, before a gravelly voice begins the narration:

It started out as a straight forward job. And that's the way I like them. Straight forward and money in the bank. But it wasn't. The client was rich enough to send his lawyer into my office like an errand boy in a $200 suit.
"You Mallory?" the suit asks.

I pushed the brim of my fedora up off my eyes but didn't take my feet off my desk. Manners only go so far. Besides standing up would just show off how rumpled my $10 suit was. "Yeah, that's what it says on the door; 'J. Mallory-Private Investigations'.

"Can you be discreet? I represent a very wealthy man who doesn't want his problems getting into the papers."

"I wouldn't be in business if I had a loose mouth, would I? Now why don't you tell me those problems and I'll see if I can help."

So he did. The Old Man had a tear away daughter named Ursula.

She'd fallen in with a bad crowd; those Nazis you read about in the papers with that funny little guy on the newsreels. And I ain't talkin' about Charlie Chaplin. Seems Ursula liked wearing tight black uniforms and she and her new friends were fixing to head back to the Fatherland for a big party. I needed to get her back so her father could put her into a very expensive and very strict convent school. More uniforms but without the parades and torch lights in Nuremburg.


So I'd been on her tail all week and found out they were planning a rendezvous in old man Barratt's scrap yard. I got in my brown coupe and headed down to the rough part of town. While waiting at a stop sign I noticed the gals pull up in a car behind me. They were all blond and dressed in smart black caps with silver badges. I pulled over and let them get ahead of me, looking into the glove box so they wouldn't see my face. They passed and I pulled out behind them.


As I rounded the corner onto Second, things got complicated real fast. Something as big as a building had erupted through the pavement at the intersection of Second and Elm.

Funny little guys who weren't Nazis were coming out and heading into Barton's Warehouse. Some bald guy in a white coat seemed to be giving directions. Later, I found out that he was Professor Calvera, a renegade scientist from some government big brain outfit.

He'd built the big tunneling machine and found these little guys underground to do his dirty work.

A couple of Black Marias howled down the street but it didn't look like the police budget went to driving lessons. The first van ran over a citizen and then the second rear-ended the first.

Capt. Goodenough, already starting to froth, jumped out of the second van and charged the stiff with a traffic violation.

His boys in blue ran down the street towards the weird machine and smack into an ambush. Big Tony had some gunsels on the roofs to give security for the mole creatures.

Three cops went down and Goodenough started screaming for help."Send lawyers, guns and money! I've got rampaging Bolsheviks down here!"


Some help showed up, but not for Goodenough. A big shadow blotted out the sun. I cranked down the window and looked up, it was a big zeppelin with a red swastika on the tail, low over the junkyard!. Ropes were hanging from the gondola and soldiers dropped down them into the scrap yard.

As if that weren't enough people at the party, a Hughes flying boat started circling and tiny figures with jets of fire jumped from the side door. The fighting scientists of the Rocket Corps had arrived to foil Calvera.

Two of the Rocketeers flew over to the zeppelin, boarding the gondola, while the rest landed on a rooftop beside Tony's men. They must have convinced them of their patriotic duty, 'cause the gangsters started shooting at the zeppelin guys.

(Note - I was playing the Rocket Men and my experience of these games is that the first few teams on the field end up getting shot to bits by every one else. I therefore thought that a big federal cheque would help Big Tony see his way to defending the US against the evil Molemen, and that worked pretty well as a way not to have to take on the gangsters. My idea to board the Nazi airship while the Zeppelin Truppen were busy below almost worked. MP)


During all the chaos, dock worker Shorty Muqhabele lead his gang of wharf rats into the warehouse to try and grab some barrels of whiskey.

This incurred the wrath of local Tong boss, Ya Wang. The Tong boiled out of the Chinese restaurant waving cleavers and chopsticks. Others appeared on a roof top brandishing a different kind of chopper.

Danny, the plucky street kid who only had one mother and every guy in the gang for a dad took one Tong down a shot from his slingshot but the resulting hail of tommy gun fire cut him and several other wharf rats down. A wild fist fight with knives, swords and crow bars developed behind the warehouse with Shorty's crew getting the worst of it.

Around the Molemen's machine another big fight had developed. I'm pretty sure there hadn't been a bigger fight since the Civil War, or maybe the Christmas sale at Macey's. Rocketeers were trading blows with Zeppelin Truppen and Molemen. Gangsters and Marines from the Naval Base were wading in too.

Stray bullets into the scrap yard had activated some of the old robots dumped there after they had rampaged through downtown last year.

The walking ash cans started battering everything in sight and carried off a couple of nuns. Ilsa and her She Wolves tried to ram through the crowd but wrecked their car on the rubble. They all got out and started fighting with everyone around.

I spotted the wayward offspring Ursula and jumped from my coupe. Drawing my pair of .45s I snapped off a couple of shots at the he-Nazis to keep them down while I dealt with the females of the species. I grabbed Ursula and slapped Ilsa.
"You've been a very bad girl."

When she tried to break free I slapped her too and dragged her back to the coupe.

A couple of carloads of G-Men rounded the corner, they'd also been tailing the Nazi spies.

Seeing me with Ursula in her Sunday Going to a Whipping getup, one of the Feds took a shot at me. He was so close I felt the unburned powder whistle past my ear. Fortunately he missed. With my free hand I slugged him in the nose and pulled out my license. That didn't help much as the dame and I got hustled into the back of a Federal sedan to be taken downtown for a long uncomfortable night in the basement of the Federal building.

We were sitting in the back of the car watching while the G-Men and Marines busted up the last of the She-Wolves and spies. The surviving Zeppelin Truppen were hauled back to their airship along with a captured robot. Big Tony's men started to fade. They tried stealing the Marine's truck but wrecked it backing down the street. A bunch got gunned down by the Marines in retaliation, and the rest grabbed an unguarded Black Maria and sped away.

Calvera and his molemen seemed to do OK. One of the Rocketeers had been knocked down and I saw him carried off by the Molemen. They also grabbed Ilsa in passing as she fell back from a gun butt to the head, and I think they even got a nun, but I didn't tell the G-Men any of this. Ma Mallory didn't raise any kids goofy enough to volunteer information to the feds!

Calvera's machine, loaded with loot from the warehouse and prisoners withdrew back into it's tunnel. More sirens roared by as Detective Sergeant Crueller

and some motorcycle cops finally arrived to reinforce Goodenough. The motor cops didn't stop soon enough and wrecked themselves on the hole made by the tunneling machine. Crueller spent the rest of the day rounding up stray robots with some help from the Marines. Crueller was happy though, Goodenough had made such a mess of things that his political career was finished. Duke O'Rourke, that up and coming new reporter for the Pottersville Expositor was there to catch all the dirt for the Monday edition. 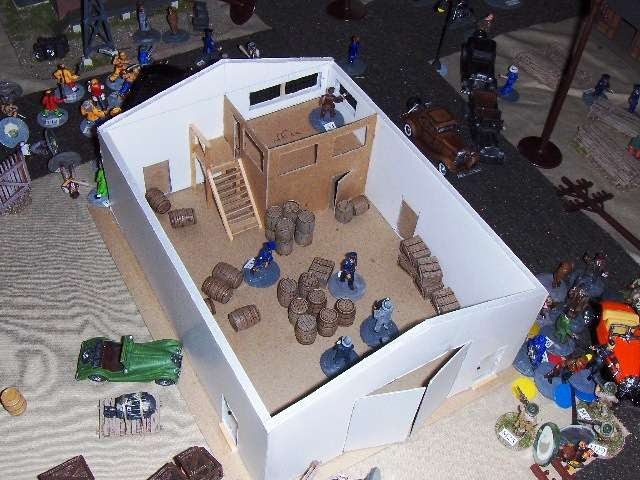 The Old Man's lawyer showed up to get Daddy's Little Girl out of trouble and back into pleated skirts pretty quick. He got me out too, eventually, and gave me a big bonus for all my troubles. I could have kissed the stack of dead presidents if my lips weren't swollen.


The End (Until the next sequel - there are rumours that the Corps of Rocketmen are planning to mount a subterranean expedition to pursue Calvera and the Molemen. Meanwhile, Dr. Calvera has Ilsa the Nazi she-wolf in his custody - who knows what bizarre genetic experiments he might contrive to breed an army of Nazi Molemen. One thing is for sure, you can read about it in the Pottersville Expositor).
Posted by Mad Padre at 4:51 PM