Wargaming With The Big Boys And Girls 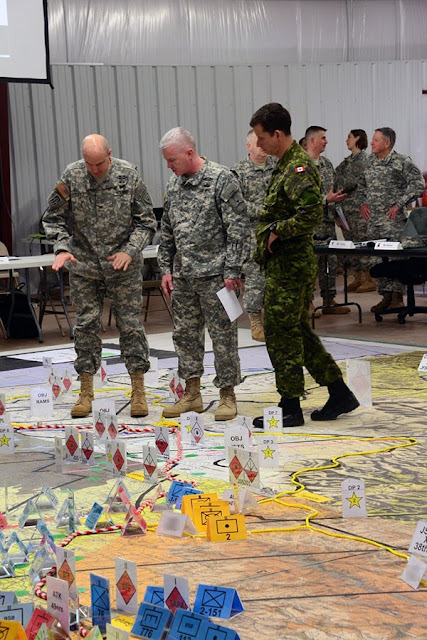 Sometimes this image, from a recent Canada/US military exercise, is how I would like to wargame, stomping around on a big map in my combat boots, pointing at things, with player aids and counters carefully prepared by dutiful underlings.

This last week on The Strategy Bridge, an online journal for military, government and think-tank types, there has been a good discussion on wargaming from a professional perspective.

Of course, for some of us, wargaming is a subset of military history that looks backwards rather than forwards.  We focus on past conflicts, and ask ourselves if the games are faithful models of the past (assuming that we can know the past), or, in the words of the old Avalon Hill box titles, if we can do better than Alexander or Rommel did.

However, for those of us in the hobby that want to look forwards, who are interested in wargaming the near future, we will know that wargaming as a hobby has often intersected with military training.  Mark Herman, for example, was one of a stable of games designers who cut their teeth with Jim Dunnigan and SPI imagining future wars with the USSR and other likely opponents before the fall of the Berlin Wall becalmed SPI and ultimately bankrupted it.  Herman, I think on the Guns, Dice and Butter podcast, talked about how he was picked up by the Pentagon for the work he had done with SPI.  More recently Brian Train and Volko Ruhnke have attracted attention from the military community, who see their contemporary titles as useful training aids.

So, depending on where you are in our hobby, the stuff in the Bridge series may not be earthshaking news, but it is interesting to hear professionals talk about the same issues of simulation, probability and uncertainty that we also think about.

Krisjand Rothweiler talks about various types of wargames, including matrix and seminar games, to imagine solutions or strategies to problems such as geopolitical rivalries over territories and resources, or terrorism.

Tom McDermott writes about the importance of capturing the psychology of the opponent in a wargame, in the spirit of Clausewitz's use of the metaphor of a duel with a thinking, feeling opponent rather than a dispassionate, predictable adversary.

Mark Jones writes about using wargaming in a predictive manner, assuming that you can get the probabilities write.  He starts with an anecdote about US troops preparing for Desert Storm, using a boardgame by Frank Chadwick's (sadly now defunct) Games Design Workshop to prepare for their war.  Jones notes that predictions of allied casualties for Desert Storm were wildly off, and asks how wargames designers can and should address uncertainty in their models.

Finally, Benjamin Jensen writes about how military leaders since Moltke the Elder have used wargames to learn about their craft and to prepare for the future.  Jensen ends with the promise of a series of games being published online by The Strategy Bridge over the year to come, a project I shall be watching with interest.

Obviously the types of games and the mindsets described in this article may be vastly different than the typical club game  fought in a few hours, where Vikings and Saxons, or Tigers and T34s, are pitted against each other in a purely tactical context.  However, if I could go to a weekend event where there was a game, perhaps lasting half a day or a day, run according to some of the principles described in these articles, for example, any of the matrix games described here on the Paxsims website,  I would be all over that.

Blessings to your imaginings!