When we bought the new house, I was amazed at how much light was in the designated wargames room.   Eight neon light fixtures in pairs, for a total of sixteen neon bulbs.  That’s a lot of light!  It makes me wonder what the previous owners did in that room.   Possibly something of an illegal botanical venture?  The town I live in now, Barrie, Ontario, has a long and fabled history of such ventures.

After moving in, I quickly realized that only four of the neon bulbs in the wargames room were working.   Possibly the old bulbs had burned out?   I went off to the local DIY store and bought a dozen neon bulbs, rushed home, installed them, and at best got only faint flickering.   How disappointing.

It’s probably the ballast, Madame Padre observed wisely.  It just so happened we had the electrician coming the next day to fix other things that had mysteriously stopped working since we took possession.  Funny how that happens.   He gave Mdme. P. a quite to replace the ballasts in the six fixtures - around $800.   Yikes, we said.

I wasn’t quite sure what a ballast was, but I found a ton of how to videos on YouTube, such as this one.  Now, I have done a few minor home electrical projects before, but always with great fear and trepidation, on the general principle that you connect the same coloured wires together and all will be well.   Even so. there’s always that moment at the start, after I turn off the breaker and I nervously touch the wires, thinking this is the last thing I’ll ever do, but there was the ceiling light and fan I installed last year, and the garage door opener before, and I’ll still here..    So I watched the video again.  Doesn’t look that hard, I sez.   So back to the DIY store I went, found a ballast (about $25 Cdn) and found the whole process fairly easy.  Remove the offending old ballast (pictured below), install the new one, wire it up ... 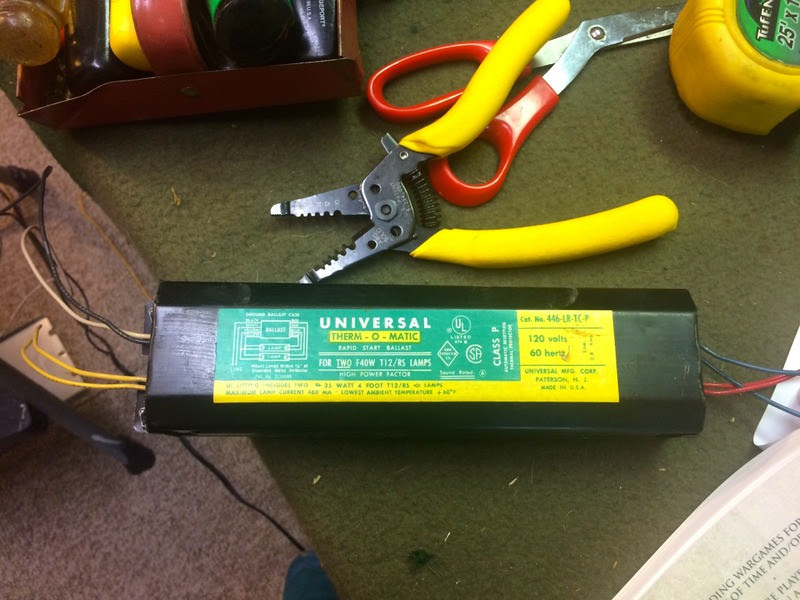 … and cross my fingers, throw the breaker, turn the switch, and voila!  Mdme. Padre celebrates the achievement. 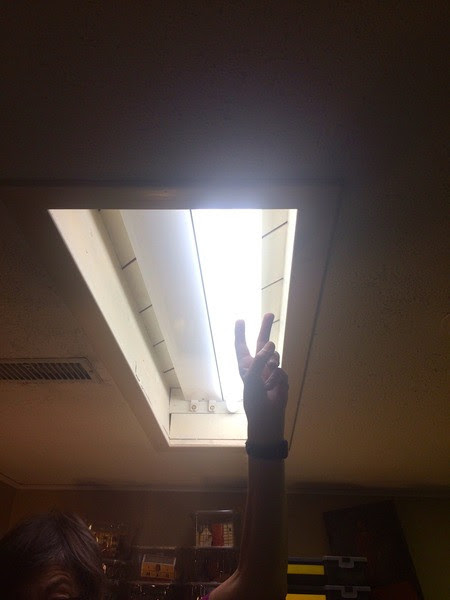 This operation leaves me with five more ballasts to replace, if I really want to get all sixteen bulbs into service.  As it is now, I have six bulbs working in a fairly small room, and the pictures from my first game looked really bright.  I suspect I’ll add at least another pair, but after the stygian gloom of the last war-game room, this much light is a luxury!

Blessings to your die rolls and wiring efforts!