Above Us The Dice: The Hunters (Tuesday Night Boardgame)

Occasionally I use Tuesday to talk about a board game I’ve played.   Lately I’ve been having fun with The Hunters, a solitaire game from Consim Press  and GMT games designed by Greg Smith that is terrific fun and suspense.   A campaign game, you choose a start year between 1939 - 1943, when it was still possible to have fun as a U-Boat commander, if sitting in a long steel tube full of  condensation, extremely bad smells, mildewed food and sweaty shipmates could  be called fun.

June 1941.  Kapitainleutnant Schlomp takes U14, an old Type ViiA boat, out from Lorient.  After two years of fairly successful patrols in around the British Isles, U14 is being sent out into the Atlantic.  Halfway through the patrol, Schlomp sites a fat convoy.  Four ships are closest to U14, including two fat freighters and a tanker, over 30,000 tons of targets.   Since it’s night, Schomp elects to go in on the surface and fire all five tubes, four forward and one aft.   He could make the attack at Medium or Long Range, which could be done without risk of detection before firing, but chooses to make the attack at Close Range.  This tactic carries the risk of being detected before firing, but gives the best chance of hitting with torpedoes.  Schomp is about to fire when a destroyer is sighted closing rapidly.  ALARMMMMMM!!!!

The item below by the way is one of two charts that the player needs during the game.   The other, seen below, is the U-Boat status display. 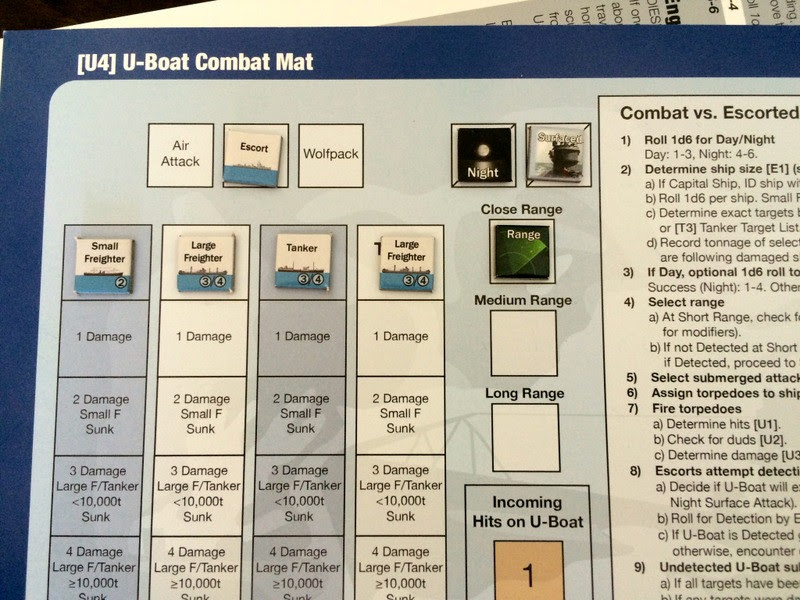 U14 takes a hammering.   Each combat round the escorts make an attack on a detected UBoat, and after damage is determined the UBoat has a chance to evade.   If unsuccessful, the Escort makes another attack, and the cycle continues until the UBoat successfully evades or escapes.   U14 takes four rounds of punishment.   Five of six hull boxes are damaged.  Two more hull hits would be fatal.   The hydrophones are damaged, making it harder for crew to follow the attackers and evade them.   The batteries and the 20mm flak gun are also damaged.   Fortunately, Schlomp and his crew survive, and survive the long trip back to Lorient, even with damaged batteries making it difficult to surface.  U14 is attacked by an Allied aircraft in the Bay of Biscay, but is able to dive in time.    After six successful tours, this is the first time Schlomp has come home with all his fish and no kills, and has five long months to wait for his old boat to be repaired.   A successful tour might have meant promotion and a new boat, but that will have to wait.  At least he and his crew have lived to hunt another day. 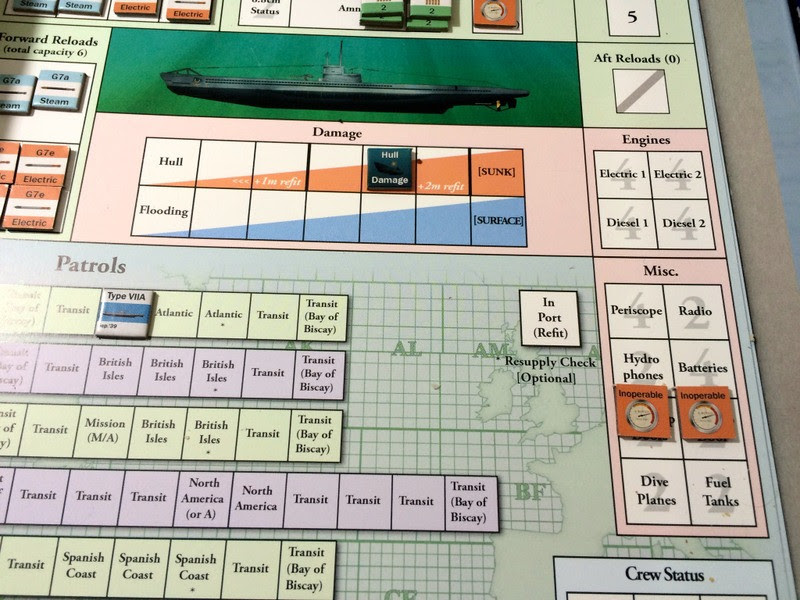 The Hunters may not be much to look at, but it is a dramatic and suspenseful game, with the reward of developing a successful career and crew, while knowing at any moment that a bad dice roll could turn the ship into an iron coffin.  Since The Hunters uses a random system of generating encounters and patrols, each outing is different.   Some of them are remembered quite fondly.  Early in 1940, on his second cruise, Kptlt Schlomp was ordered on a minelaying mission off Britain.  This meant he only had five torpedoes on board, and after dropping off the mines, he was rewarded with an encounter - a Royal Navy capital ship!  Four torpedoes were fired while submerged at a Royal Oak class battleship, and three hit!  But, early war German torpedoes are crap and only one detonated, causing one point of damage, not enough to sink the battlewagon.  U14 was hit several times by the escorts before escaping, causing some flooding and damage.   The rules give a U-Boat the chance to pursue a damaged capital ship, but with only one torpedo left and significant damage to his boat, Schlomp decided to return to port and hunt another day.  He will always remember that big ship in his periscope and the Knight’s Cross that might have been.

As time goes on, the odds become harder for the U-Boats.  Escorts and aircraft have better odds of detecting and attacking, making each decision to attack a nerve-wracking one.   For this reason, the game ends in 1943.  If you’ve read a book lie Herbert A. Werner’s Iron Coffins, you’ll know that by mid 1943 most assignments were little better than suicide missions for U-Boat crews.   Hopefully Schlomp will survive and get posted to a training assignment ashore by then.

The Hunters is very well supported by an online community, so when you get tired of playing it as is out of the box, there is a wealth of variants to be downloaded and tried.