Battles In Regina: My Excellent Gaming Adventure At Schloss Campbell-Hanks

Now it can be told, the tale of how I battled through the frozen wastes of mind numbing emptiness that are the Canadian prairie to the Analogue Hobbies HQ in Regina, Saskatchewan, pausing on the way to draw inspiration from some of the great wonders and shrines that dot the bleak Canadian landscape. Here, for example, is the Great Moose Butt, an object of great veneration whose origins are lost in antiquity. 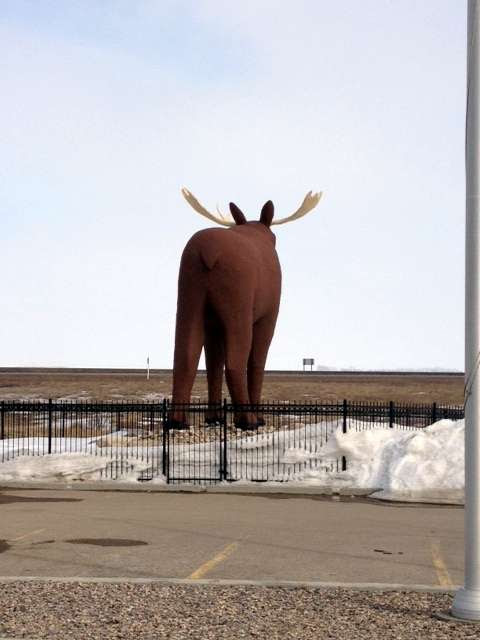 Once comfortably settled into Curt's home, fortified with a giant Meat and Wheat pizza and several cold ones, we settled down to a World War One game featuring kit I have long admired on Curt's blog, his Great War In Grayscale figures. I confess I didn't get these figures at first, but seeing them together with Curt's signature gray and black landscape evokes the period as we know it through period photographs and newsreels, back before the world was in colour (see http://www.cooperativeindividualism.org/political-economy-of-calvin-and-hobbes-1.html). We used the Too Fat Lardies Great War rules, Through the Mud and Blood, and they worked well, providing for a tense and uncertain game.

In this scenario, a meeting engagement set at the time of the Belgian's flooding of the Yser region in 1914, the German objective was to reach a key bridge across a canal, while the Allied goal was to reach a lock station and open up the sluice gates to start the flooding. Since the German objective was on the Allied start line and vice versa, it made for a tense game where both sides would have to move swiftly and decisively, while overcoming that great foe of mobility, the machine gun. Here the Belgians use their deadliest asset, an MG-equipped armoured car, to check Gernan scouts occupying a church and churchyard in the centre of the table. Desite its fierce appearance, the armoured car was a bit of a bullet magnet, and wasn't all that effective. 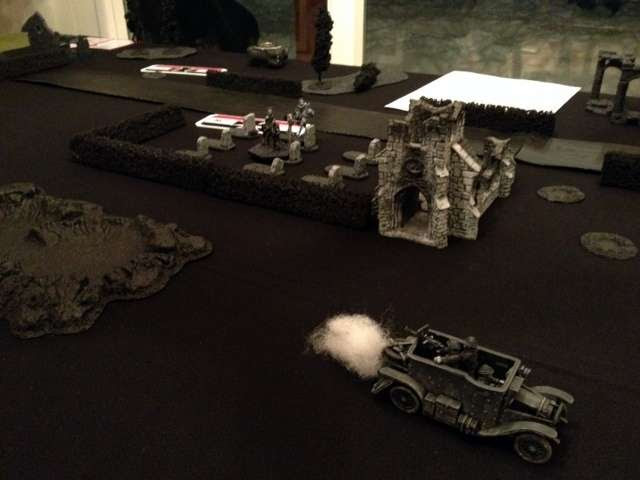 Reinforcements kept arriving and being fed into the fight. Here Curt's dog-drawn Belgian MG and team moves up beside a lovely piece of terrain, made by Kobblestone Castings, very nice kit. The dog gunners were commanded by y Allied counterpart, Sylvain, while our German opponent was Curt's friend Stacy. Now Sylvain's habituary caution is legendary among his gaming friends, and this block of townhouses was irresitible to him. Leaving the dogs to frolic in the adjacent leash free park, Sylvain sent his machine gunners to the top floor to smash windows, set up a field of fire. A squad of tough Highlanders, also under Sylvain's command, later vanished into the same buildings, apparently in search of liquor, and were never seen again. 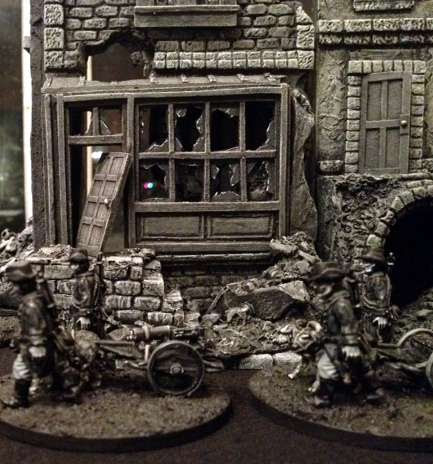 Stacy's troops hunkered down in the churchyard and engaged in a duel with the Belgian machine gunners. While they took some stick they repeatedly got the better of things and drove the Belgians away from the window in showers of flying lead and broken glass. Stacy's main effort was in the center, allowing me to gradually slip a squad of raw but enthusiastic Belgian infantry around and into position, had we time for a few more turns, to make a run for the lock and open the sluice gates. It was a near run thing and the battle gave a good feel of how the early fighting of 1914 quickly ended in bloody stalemates. A great treat of a game. 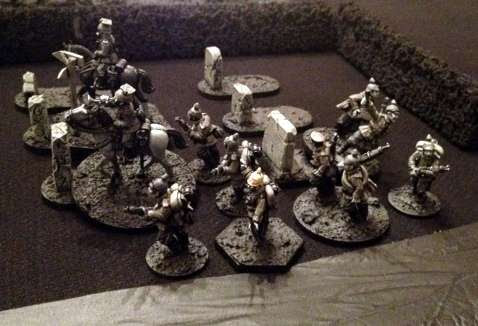 On Saturday afternoon Curt's friend John Bertolini drove down from Saskatoon to host our second game. John was described by Curt's wife Sarah as a true renaissance man, and I agree. A carpenter, scholar, raconteur, as Sarah said, he could make you a house, talk to you in French, and make you a model soldier. In fact, John could make you a house and then FILL it with toy soldiers. The gob-smacking thing about this game was that every one of the hundreds of figures on this table was sculpted, cast, and painted by John. 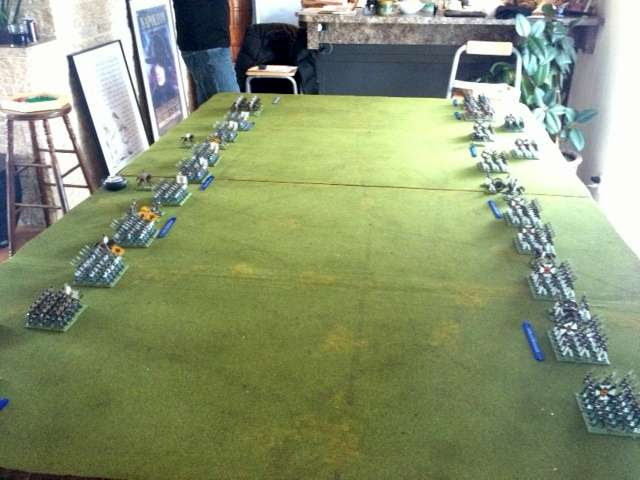 John explains the rules to myself and to Curt's colleague, Jeremy. The rules were a fairly simple set of generic 19th century rules, from a hardback book of newish publication date, but I'm blessed if I can recall who wrote them. This was Jeremy's first foray into miniatures gaming and he showed himself to be a talented and aggressive commander. We made a good team, unlike, say, Curt and John, who's command was riven with rivalry, recriminations and backbiting, rather like most 19th century generals, come to think of it. 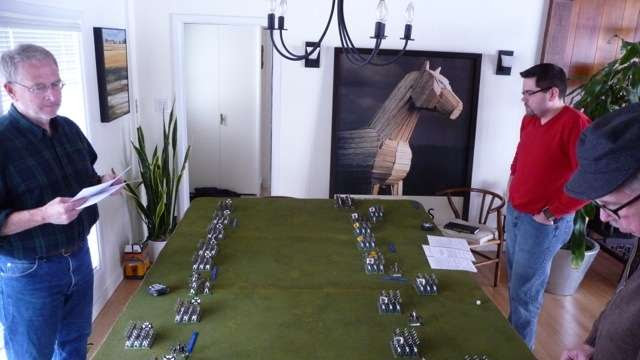 Curt concentrated both of the Russian cavalry regiments on his flank and came in hard against me, his left hand regiment braving hails of grape and musket fire. 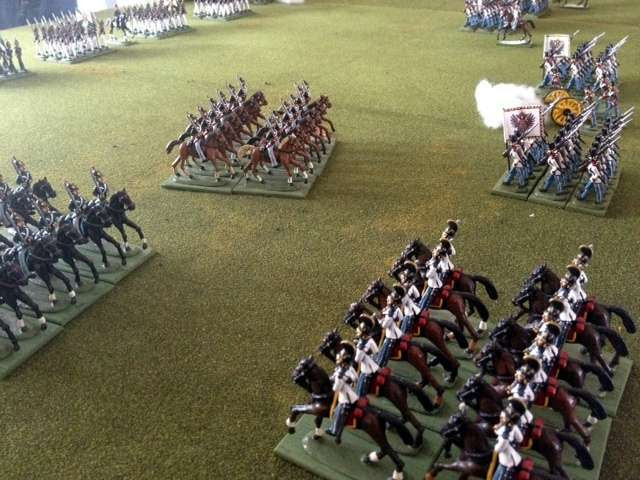 One full and one depleted Russian regiment charge into the steadfast and brave Austrians. Curt's sexy Litko markers are on display here. This charge began a running fight that would last for practically the entire game, with charges being made, countered and repulsed, until eventually a handful of Russians were seen off by a slightly larger handful of Austrians. 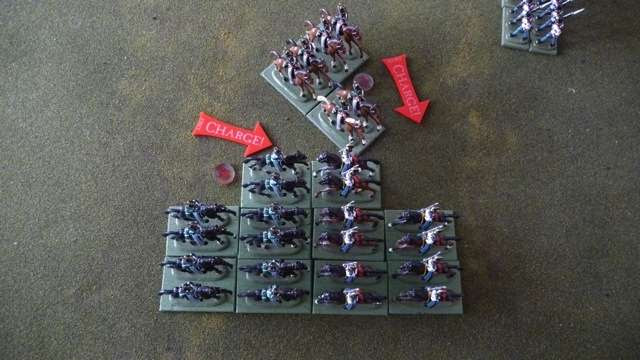 Meanwhile, Jeremy resolutely took the fight to John in the centre, lowering his head and wading in through a flurry of blows like a boxer. The Austrians closed to musket range, shook into line, and slowly won a brusing firefight that left most regiments on both sides sadly depleted. However, at the end of the day, we decided that it was an Austrian victory. It was a truly enjoyable fight, the kind where both sides sense victory drawing near and then slipping away repeatedly, and with the outcome hanging in the balance for much of the game. For me, it was one of those rare moments, maybe a once in a lifetime event (unless I go back to Nova Scotia and visit Ross McFarlane) where every figure on the table is, from start to finish, the work of one fellow. Truly inspirational. 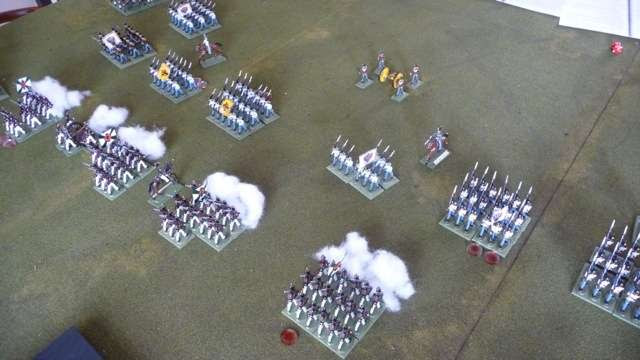 Following a rest and an excellent salmon dinner from Sarah, Curt and I welcomed his friend Peter Douglas. Readers who followed this year's Analogue Hobbies painting challenge will recall seeing many of Peter's great WW2 ship models on display. My experience of painting naval models is limited to a handful of larger (1/600) scale ships, but Peter makes the painting and basing look easy. Peter's scenario was based on Savo Island at Guadalcanal, transposing the Italians for Americans and the British for Japanese. In our game a Royal Navy task force of cruisers and destroyers was using the cover of darkness to attack an Italian landing force somewhere in the Med. The Regio Marina Italia was defending the troopships with a similar but slightly smaller force of CAs, CLs and DDs, and since I was the least experienced player, I was given the Italians while Curt took the helm of the RN. Peter umpired and interpreted the rules (General Quarters III as I recall.

Here I am muddling my way through the initial plotting of moves, trying hard not to do anything wrong such as run aground, shoot my own ships, collide in the dark, etc. I quickly discovered that the Italians were hindered by a lack of radar and much less accurate gunnery. 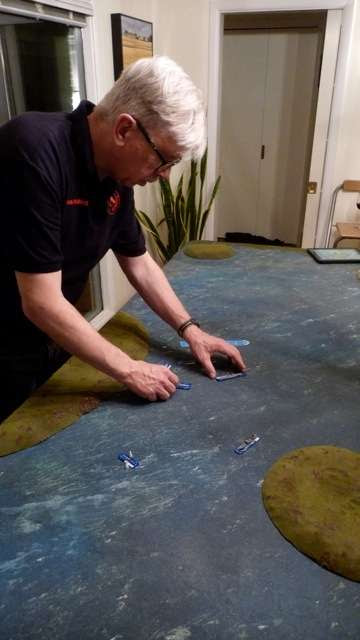 However, as it turned out, the dark was a two-edged knife. While one of my DD pickets, the Frescia (or Foccaccia as she was rudely rechristened), was hammered into scrap by opponents seen only by their gunflashes, my other picket, Ascari, detected the British at close range while herself remaining unseen. Her captain bravely turned towards the British line, flushed his torpedoes, and then steamed away at flank speed. The results were gratifying, with multiple hits causing fires, flooding and damage to the DD Nubian and CL Euryalus. 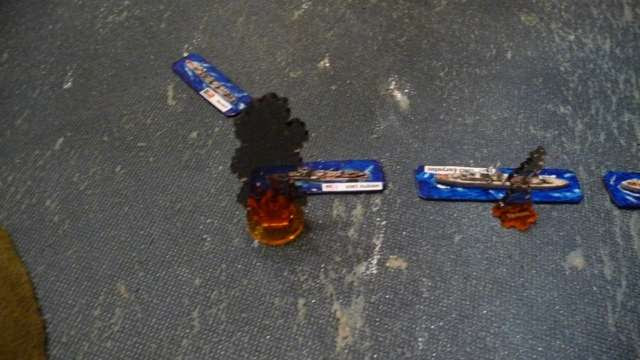 Getting caught in the narrows was bad luck on Curt's part, and on the sound theory that all wargaming is essentially role playing, he opted as the RN commander to turn away and not risk further damaged ships that the Luftwaffe might pick off come the dawn. Before he turned away his division fired all their torps, which had the effect of blowing the stern off the exultant Ascari, sinking her outright. The Italian commander, flushed with success, turned away from the fish and put on speed, saving further damage to Il Duce's ships and effectively ending the engagement. 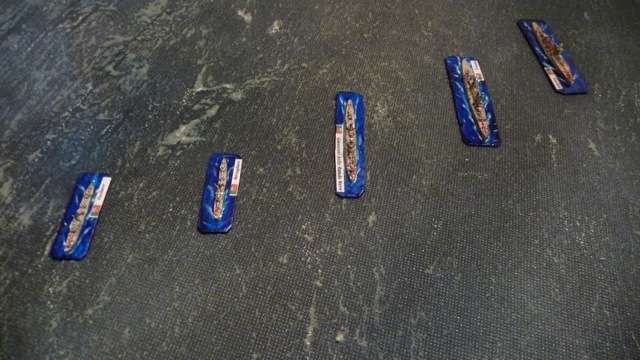 Result, a minor Italian victory, as the two damaged RN ships would have been Stuka bait come the dawn. I greatly enjoyed the GQ3 rules, which Peter explained masterfully. It was a treat to push his lovely ship models around. 20th century naval gaming is something I would love to get into, but have to firmly forbid myself from indulging in. There are too many fun periods, and one must specialize in something. So all told, a wonderful weekend of gaming and good company. Thank you Curt and Sarah, John and Peter for the excellent adventure.