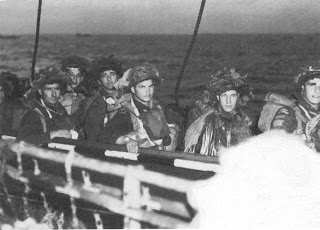 After a long absence, I've had time to continue the story started with Platoon Forward and Lt. Denis Audet, a vain, ambitious and brave young commander of 18 Platoon, Le Regiment de la Chaudiere, who won his first action on 7 June, after landing on Juno Beach.

Using PF to generate this platoon, the original commander of 1 section was Cpl Francois Yergeau, a likeable and cheerful young man with a bent for mechanics thanks to working on the family farm. Yergeau also spoke some English, an asset in a Francophone battalion within an Anglophone brigade. Unfortunately, Cpl. Yergeau was killed seconds into the platoon's first engagement, an assault on a hill some ten kilometres inland from Juno Beach, as part of the brigade's consolidation on 7 June.

So Cpl Legros is quite a fighter, but no choirboy. A good soldier to take over 1 Section, which lost another rifleman in addition to Cpl Yergeau. With his coarse temperament, military background and low rank, a perfect backstory for Legros is that he is the son of a veteran of the Great War, a sergeant who served with the Chauds in the trenches. He's a natural ally for the platoon sergeant, WO Beaulieu, himself a Great War vet who likely is a friend of Legros' dad.

So Audet is lucky in his NCOs. All three section leaders and his Warrant are all Level 2 Big Men in Too Fat Lardies terms, so they are all good soldiers. However, Beaulieu doesn't like Audet and his two cronies, Matthieu and Legros, will side with their Warrant. The more scholarly Cote, who is also ambitious, is likely to seek his Lt's patronage. A talented bunch, but some interesting potential for undercurrents and tensions.

Now to run through the Platoon Forward after-action checklist. The result is that a player character has been noticed, one of the squad leaders, who turns out to be Cpl. Matthieu of 3 Section. A further roll shows that Matthieu has been noticed by the men in his section, and another roll shows it is a positive reaction. Interpreting that result, Matthieu has just lead his men in their first action and he performed reasonably well as a leader. Finding the wine and chickens in the captured farmhouse didn't hurt his standing either. So, Matthieu's popularity goes from 0 to +1 (in PF popularity ranges from -2 to +2). Seems like a minor result, but we shall see how it figures in subsequent actions.

I also decided to check the character of Audet's boss, and so invented the character and the name Michel Charpentier, the Major commanding D Coy.

This, the Major is a good staff officer but no skilled soldier. As an idealist, he is that rare Quebecker who believes in the war as one of liberating the homeland of la France, and wants to see the sons of Quebec fight well and earn their place as equals in Canada. Perhaps he has even preached such sermons when addressing the men of his Company, who doubtless listen indifferently. He's travelled outside of Beace to become fluent in English, perhaps working for a big Anglo-owned firm in Montreal. The Battalion CO has his eye on the Major for a possible staff job with Battalion or as a liason to Brigade, but wants him to get some combat experience first.

His even temperament allows him to tolerate Audet's Egotistical personality somewhat, but the ambitious young Lieutenant is not his favourite platoon commander. However, Audet has shown the major in his first fight that he can get results.
Posted by Mad Padre at 1:21 PM