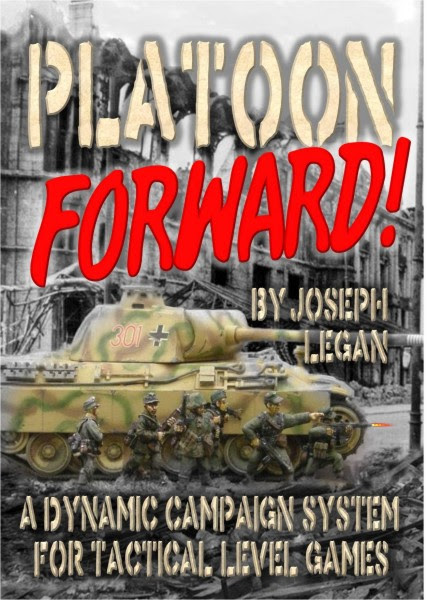 Kudos to Joseph Legan for writing Platoon Forward (PF), and kudos to Richard Clarke of Too Fat Lardies for publishing it. Briefly, PF is a companion package that would work for many small-unit WW2 wargames, allowing you to generate characters, generate tabletop encounters, and tie them together into a campaign. As I've seen several other folks say online, there's nothing new here - it is reminiscent of RPG systems going back to GDW's Traveller (hands up if you're old enough to remember that game) but Joseph was the first to sit down, write it, and make it work.

I got sold on PF for two reasons. First, I totally suck at coming up with scenarios. I sit looking at an empty table and all my toys stuck in boxes, and despair of thinking up something balanced and interesting. PF solves that problem neatly. Second, it offers a very nice solution for players who, like myself, don't have wargames opponents close by and have to resort to solitaire gaming. PF allows a series of solitaire games to be strung into a campaign where charachters can, if they are lucky, survive and gain skills from battle to battle. Joseph's own blog, where he describes the adventures of one his little soldiers, Sgt. Buffo Bustamanti, showed me how much fun it could be.

After buying PF as a .PDF download from the TFL site (no postage, no wait time, sweet!) it was easy to figure it out. Well written and edited. All I had to do was decide whatmodel kit I wanted to use it with. I have a lot of late war German and Commonwealth, less Russian. I'm Canadian so that was pretty simple. My platoon leader would be a young lieutenant newly arrived in Normandy. I was pretty sure that Mark Zuelkhe's book Holding Juno could flesh that out. Next, to decide on the Lt's unit. To make it interesting, I chose the only French Canadian regiment in the
Can 3rd Division, La Regiment de la Chaudiere. The Chauds were a crack prewar militia regiment from the Beauce, a rural region north of Quebec City, the only Canadian Frnacophone unit in the Normandy campaign and often overlooked next to the fabled VanDoos. Being in the Canadian Forces myself, I have lots of Franco names to draw on. Thus, Lt. Denis Audet was born.

Proceedng to the character generator in Part 1 of PF, I find that Audet's Personality is "Egotistical", which can be a disadvantage as the campaign continues since that makes him unlikable to other Non Player Characters (such as his company or regimental commander) who can influence his career. Making things worse, his Motivation is "Position". Since the Chauds were a Francophone unit, I thought I'd check to see if he knew English, making it a "likely" outcome on PF's "All Knowing" events table since Audet has been part of an Anglophone brigade and division for several years now. Surprisingly, the die roll said no, he's not fluent in English. Fortunately he rolled well as a soldier, a Level 3 Big Man in Too Fat Lardie terms. Finally, there was nothing remarkable about his family of origin back home.

I didn't warm to the idea of having this guy as my first character in PF, but after thinking about it, a personality came together. Audet is a handsome young man with some natural soldiering and athletic ability, the son of a modest small town business owner back home. Since he's from rural Quebec he never learned English and he's sensitive about the fact that languages don't come to him easily. His skill and aggressiveness on the regiment's hockey team helped him get a platoon command. He is fearless on the ice and doesn't shy away from hard hits, so he's brave enough. Audent has done well in the training years in England, though his vain and ambitious personality have won him few friends. No matter. He wants to do well in the war, earn some medals and promitions, go home to Beauce a hero, get ahead in business and maybe go into politics. Audet loves to go to American movies, thinking he looks like Clark Gable and wears his hair accordingly, even if he can't really follow the dialogue. Going to Normandy for the Invasion, Audet will command No 18 rifle platoon in D Coy of the Chauds.

Audet thinks he looks at least as handsome as this guy.

Now for the supporting cast in 18 Platoon. His platoon warrant officer is Jean Beaulieu, whose personality is Glum and his motivation is Hedonistic. He is a Level 2 Big Man. Those traits led me to imagine Beaulieu as an old soldier, a WW1 veteran who stayed in the militia and never expected to get called up into another war, hence his glum disposition. As for the hedonism, he likes a soldier's comforts as obtained and traded through his cronies in the Warrants and Sergeants mess. Beaulieu recognizes Audet's ambition and wants no part of it. He won't let himself or his boys get killed for this guy to get ahead.

Now for the three section leaders.

1 Section: Cpl. Francois Yergeau is Optimistic and his motivation is Engineering. He is a natural mechanic from keeping his father's tractor and baler running on the farm. He can speak enough English to get by. Level 1 Big Man.

2 Section: Sgt. Pierre Cote is Scholarly and his motivation is Position. He can speak English well - he learned it at seminary but when the the war came he left his studies to enlist. Now that he's seen the world, he would like to get ahead in it as something other than a priest. Level 2 Big Man.

3 Section: Sgt. Louis Matthieu also is Egotistical and his motivation is Wealth. He and Beaulieu are tight since he's a natural scrounger and trader and manages to get a lot of creature comforts for Beaulieu and his cronies. Francophone only. Is sure that there's a way to get rich out of the war. Level 2 Big Man.

So there's our cast of characters for a Platoon Forward campaign. A mixed bunch to be sure, but there's some human interest there. suddenly they're not just anonymous toy soldiers. Audet and his men are headed for Normandy and will be landing in the second echelon on D-Day. We'll see how they manage.
Posted by Mad Padre at 3:14 PM