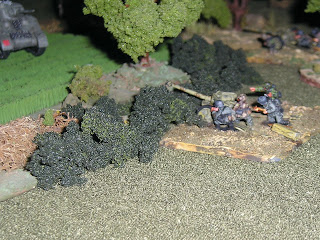 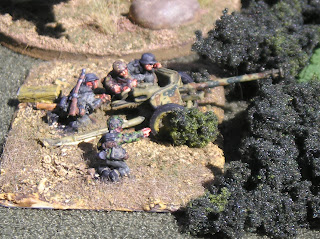 For those who don't understand my hobby/obsession, I play miniature wargames with similarly eccentric friends. The hobby combines the fun of little boys playing with Army Men, the craft of painting and model railroading, and the challenge of chess. Also, it keeps me off the streets.


Just finished these models - they are German World War Two anti-tank guns (PAK 40s), as used in the latter part of the war. The manufacturer is Battlefront, the people behind the popular Flames of War (FOW) miniatures and rules. Like all FOW figures, these are 15mm, the smallest figure scale I'm comfortable with. While they are small figures, they are relatively affordable and still paint well. I got these as part of my "Normandy Project", focusing on 3rd Canadian Division and their primary opponents for the first few days of the Normandy campaign, the German 12th SS (HitlerJugend) Panzer Division. These fellows are designed to give the German defences some ability to withstand the more plentiful Allied tanks.

These shots shows some of the camoflague details that make the SS sexy with a lot of wargamers, and shows the detail on this figures. There are more posted on the Guild miniatures forum.

Some day soon I hope to post a battle report on the first action of these young fanatics - I'm torn because I like my results here but I'll want the Canadians to do well.