After a demanding week, I gave myself Thursday off to set up this table, for a solitaire battle using Too Fat Lardies’ I Ain’t Been Shot Mum (IABSM) version 3.   My objectives were to a) use my newly completed Panzers (see last post), and b) to see how confusing a night action might be.  The inspiration for this battle was an attack made the night of 6-7 June 1944 on positions of La Regiment de la Chaudiere by elements of 21st Pz Div.  For this battle I rated the Canadian and German troops of equal quality.   The Germans had two platoons of infantry in halftracks, supported by a full zug of PzIVs, a full aug of PZ Vs, and  an HQ aug of two PzVs led by the senior armour commander, a Dynamic Leader.   The Germans had two initial stonks of 105s, but no other artillery assets.
The Canadians had two platoons of infantry, dug in, supported by 4 6 pounders from the battalion AT platoon, and an Achilles tank destroyer.  A section of two 3” mortars was on table, on call from Company HQ, and a forward observer is attached who can call on a troop of 25 pounders.    A reinforcement card, if it turns up, allows the Canadians a chance of a tank troop from a nearby leaguer of armour support.   The Canadians are holding a small village on a low, rolling ridge.
To win a decisive victory, the Germans need to take 3 of the four buildings and control the road leading off the Canadian table edge.  The German plan is to probe on the Canadian right flank with the Panther zug, and to attack the Canadian left with one of the Grenadier platoons supported by the 3 Panzer IVs.  The remaining two Panthers and the other Panzer Grenadier platoon will attack up the centre when both flanks are engaged.   The plan is to go as quickly as possible.
Since it is very dark, I follow the IABSM rules and half spotting ranges and make the required spotting rolls high ones.  For tanks, I assume that all dug-in infantry and AT guns are invisible until they open fire.   To simulate the difficulties in attacking over strange terrain in the dark, I give the Germans a movement penalty of -1 pip per die.   All firing will be one band worse than it would be in daylight, unless the target is illuminated. 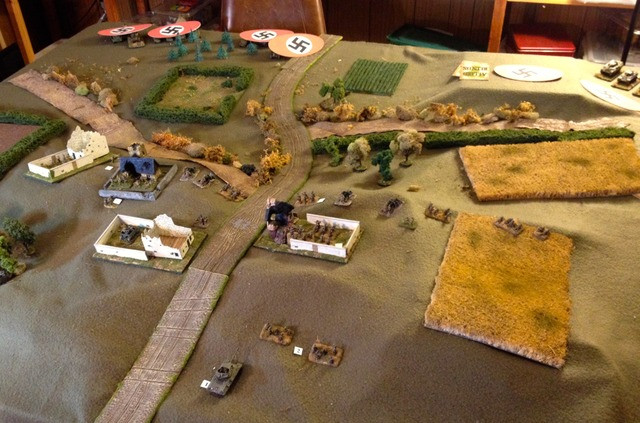 The German stonk is very successful, knocking out on of the AT guns in the Canadian left centre, by the church, and giving the other crew six shock.   Several infantry sections in the centre also suffer from shock and lose several men.  On his blind card, the Cdn company commander, Major LeBlanc, hastens forward to assist in rallying the shocked AT crew, while his two platoon commanders tend to their men.  While trying to set things to rights, they hear the sound of vehicles approaching in the dark.   Major LeBlanc orders a flare since as the Cdn senior he's the only Big Man with that capability.  I give him an EDNA (Ever Decreasing Number of Availability) four sided dice so that he doesn't have an unlimited number of flares, and his initial role is 3.  Lucky for him, he has a few flares.  He’ll likely need them.  The first one goes up, revealing German blinds moving up the central road. 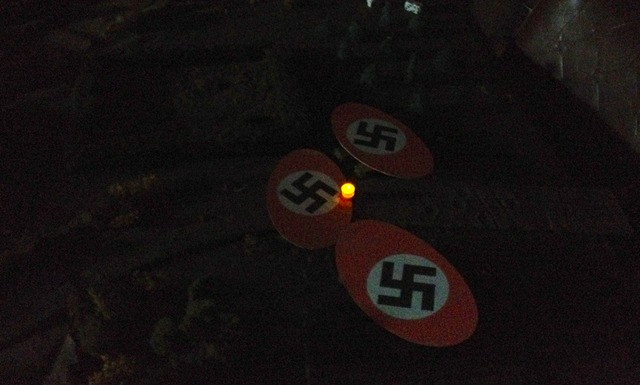 This image pretty much wiped out this blog’s special effects budget for the month.  One of those blinds is a dummy, but the Grenadiers in halftracks and the two Panthers can seen during the flare’s hang time. 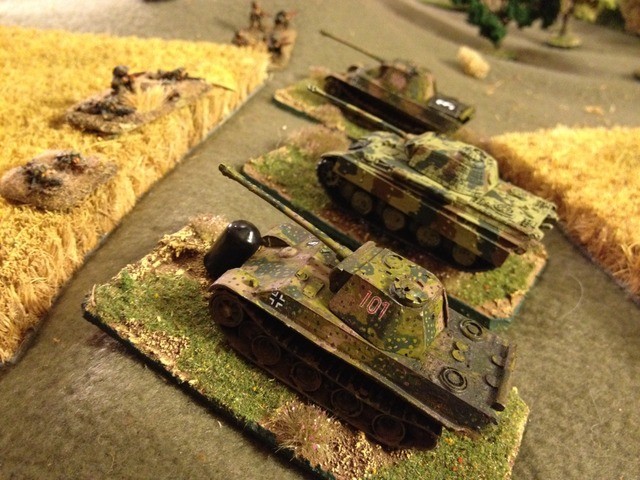 On the German left, the three Panthers bump into their first opposition.   A PIAT team gets a slight hit on one Panther, and gives it a point of shock.   An infantry section throws bundles of grenades at the centre tank, to no effect.   In their turn, the Panthers blindly fire HE in the dark, and actually kill two Canadians. 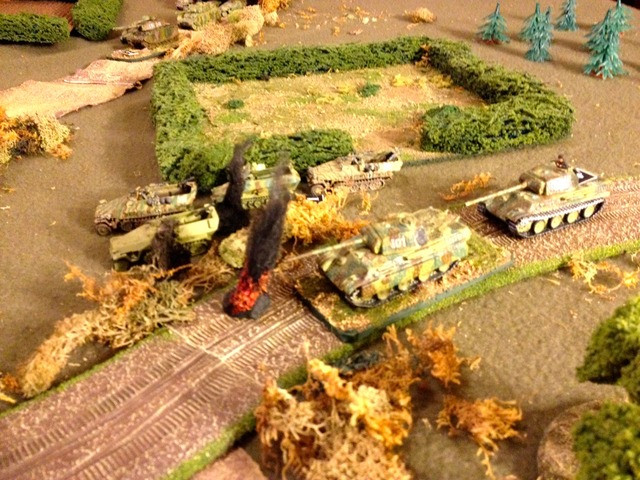 The Cdn FOO in the church gets his troop on the horn immediately, and a salvo of 25lber HE slams into the German halftracks clearly visible under the hanging flare. 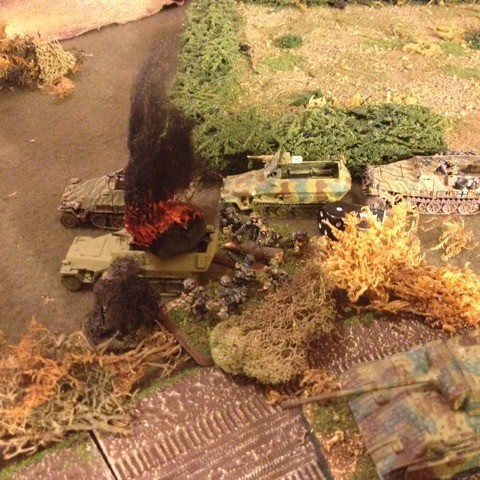 A halftack is knocked out and the squad hastily dismounts, less one casualty.    Now they are illuminated by the burning Hanomag as well by the flare, for as long as it lasts (until the next Tea Break card). 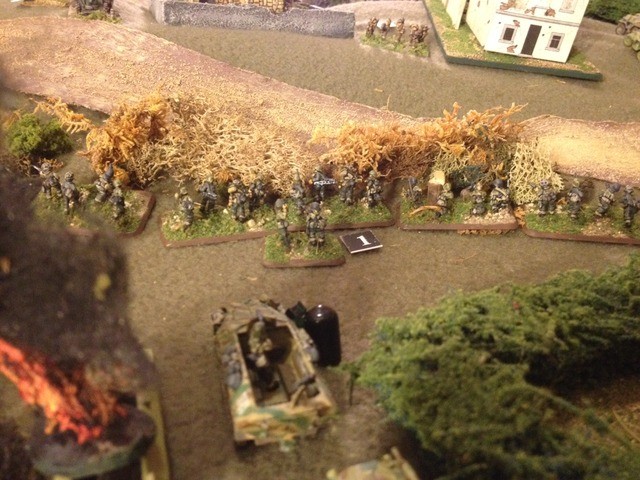 Not wanting a repeat of that ordeal, the platoon commander orders his Grenadiers of 1 platoon to debus, and they rush forward to the hedge line across the road from their centre objectives. 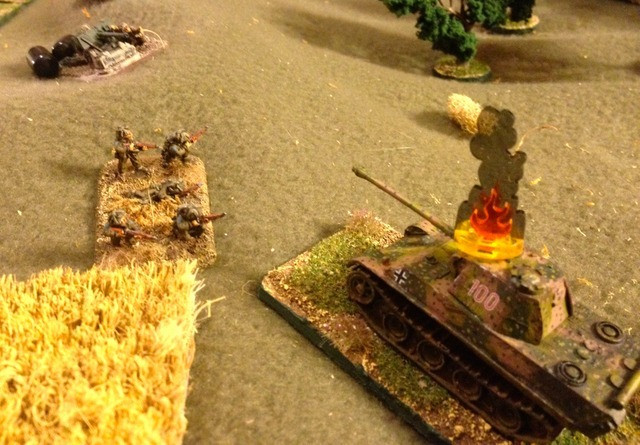 Even with two points of shock on it, one of the 6lber crews makes a good spotting roll and discerns the hulk of a Panther in the dark, aided in part by the yelling of the guys in the nearby foxholes to shoot the bastard (I figured the proximity of the friendly infantry would help the AT guys to spot the tank in the darkness).  The AT gun rolls good strike dice, the Panther less so for its armour save, even though it had ten save dice to seven strike dice - epic fail.   The result is a helpful bonfire.

The happy 6lber crew do some celebratory fist pumps. 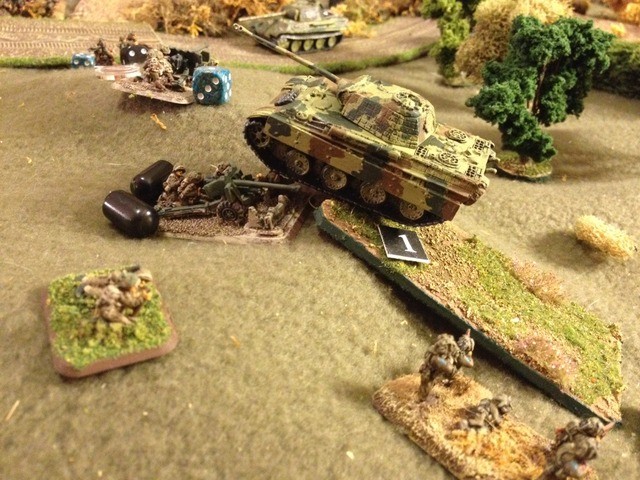 Which are unfortunately suspended as the crew runs for their lives while their victim’s littermate crushes their gun in an overrun attack. 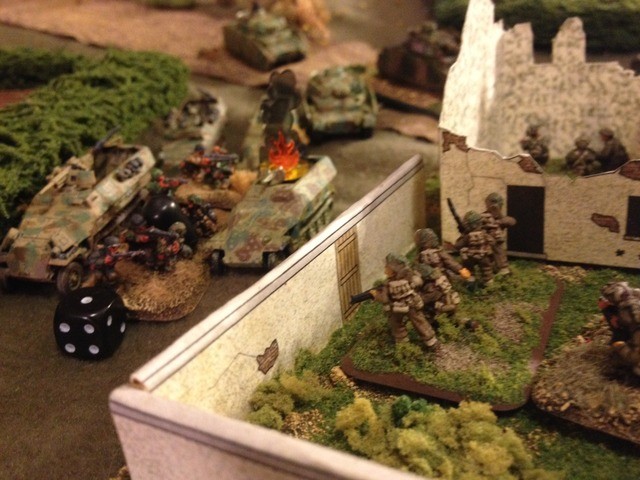 Meanwhile, on the Cdn left, things were heating up as the German 2nd Zug of Grenadiers tries to push up, supported by the Pz IVs.  One of the Hanomags falls victim to the PIAT team in the house, and its passengers disembark with shock and a casualty.   The Canadians line the garden wall and prepare for action.  They are supported by their platoon 2” mortar and an attached Vickers MG team, so they should be able to hold the place for a while. 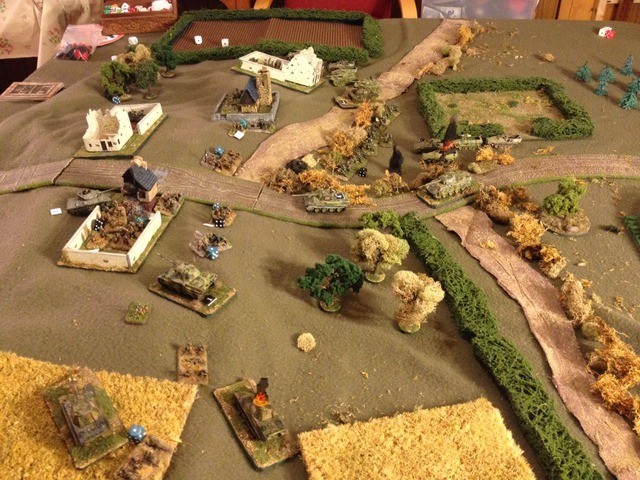 Situation Turn 5.  Cdns still hold all buildings, but have now lost two AT guns.  Germans are threatening buildings on the Cdn left.  On the Cdn right the Panthers are annoying but, as they are not supported by infantry, are not a major threat.  Major LeBlanc is having trouble with his flare gun (his card has not come up for several turns now), and wondering when his appeals for tank support will be answered. 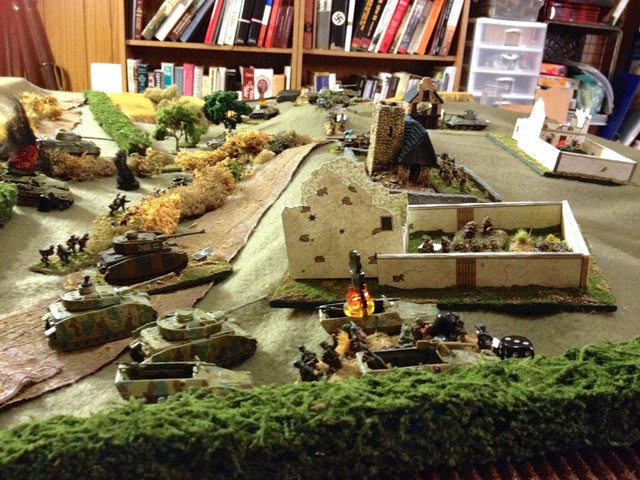 PzIVs move up to begin shelling les Canadiens out of that house. 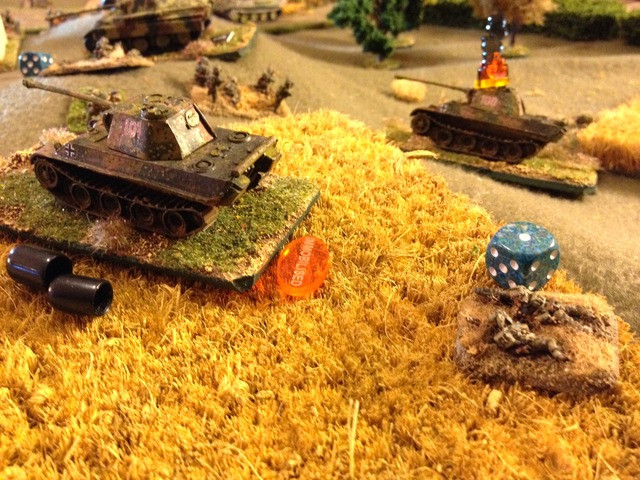 Meanwhile, on the right flank, Pte. Guy Blondin, a little guy from Trois Rivieres, his PIAT team member dead, manages to sneak uo in the dark and hit a second Panther with a PIAT round, shocking and immobilizing it.  The  German crew will eventually bail out, only to be rounded up at pistol point by Blondin and marched to the rear.  Definitely a Military Medal for Blondin.  Tanks in the dark with enemy tank killers sneaking around are sitting ducks. 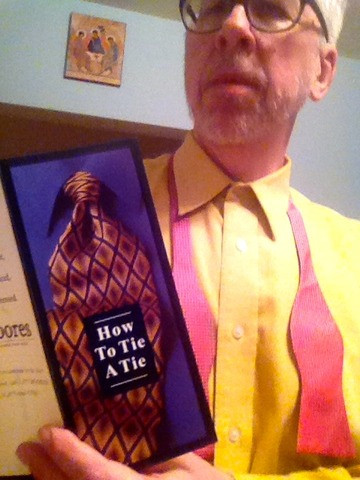 There was no action on Friday night, other than me trying to figure this out before I took Mrs. Padre to the jazz club.  Action continued today and the issue is still in doubt.   I’ll finish the story tomorrow.
Posted by Mad Padre at 8:42 PM