From My Workbench - Ruined WW2 House 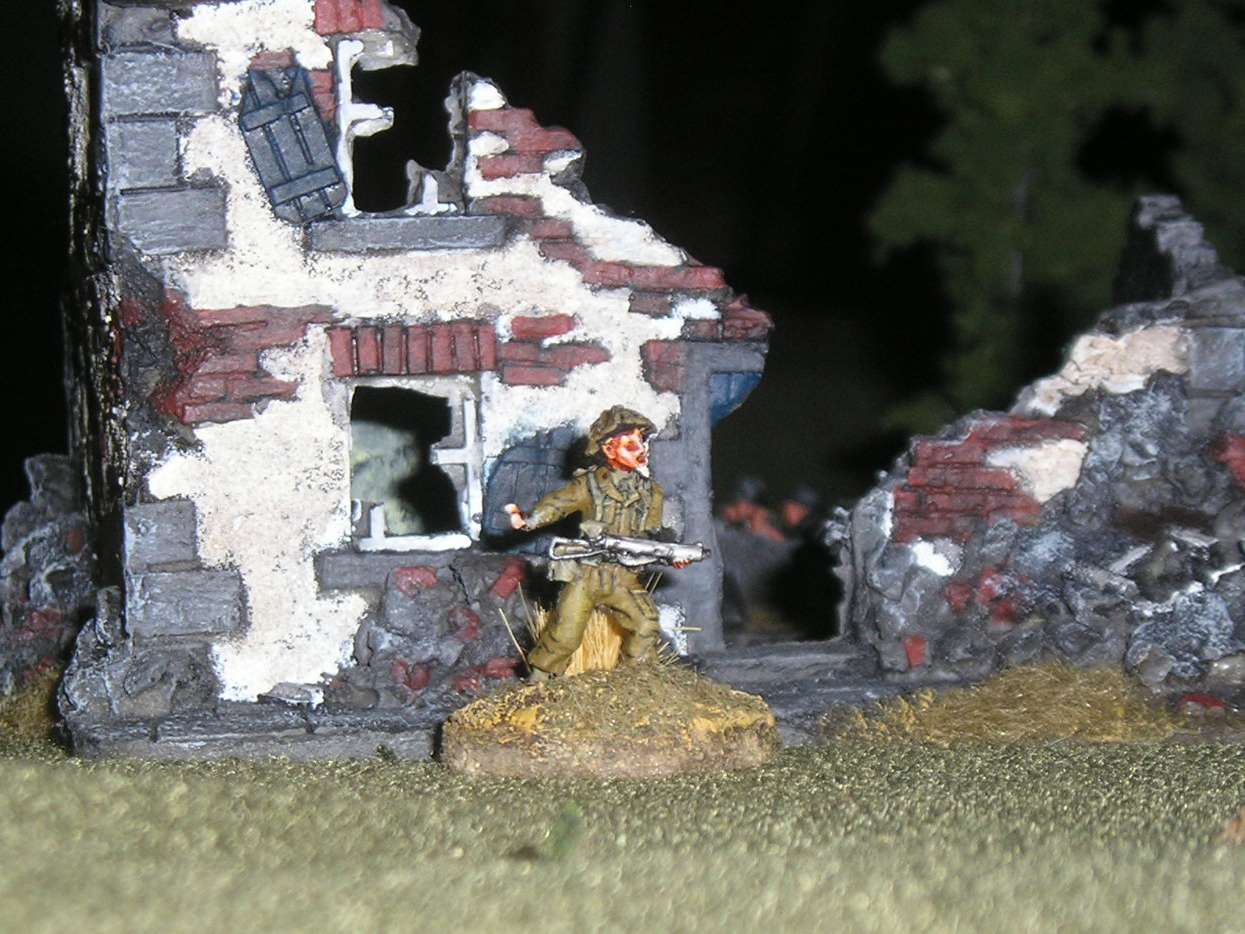 Ruined house model in 20mm (roughly HO or 1/72nd scale) by Sentry Models (AT06 Detached Ruined House), ordered from RLBPS (Bob Bowling). The house is a single resin casting, except for the bit of flooring on the second level. Enjoyed good service from these folks, would order more from them.

The figure beside it is a British officer from AB Miniatures. 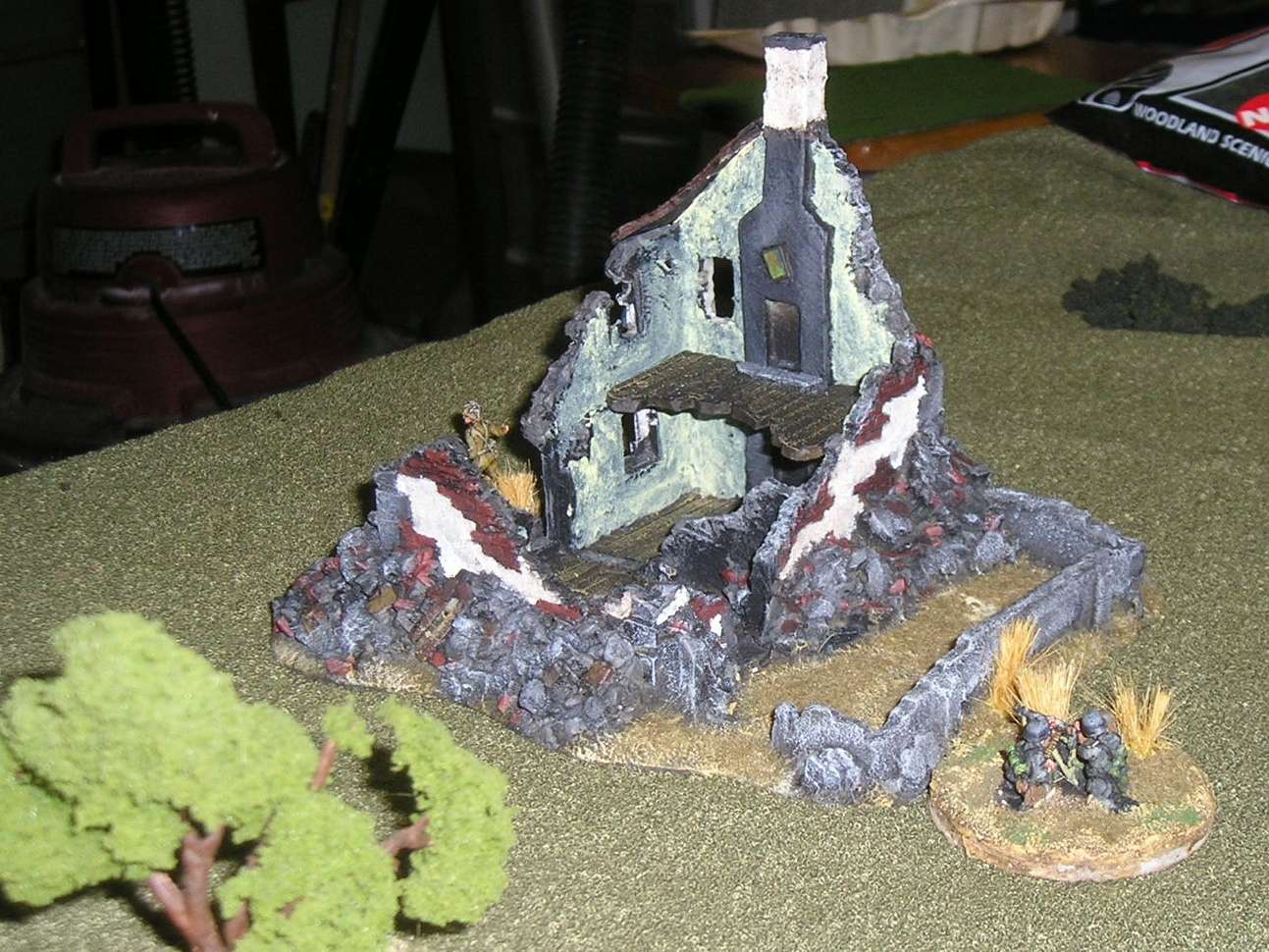 Hmm, hope that Brit officer noticed the German machine gun on the other side of that building!
Posted by Mad Padre at 4:01 PM No comments:

A US Army Chaplain in Iraq

Military chaplains: a Presbyterian pastor patrols with his flock of soldiers in Iraq
Army Capt. Ron Eastes carries a big responsibility - but no weapon - in his 'ministry of presence' with the 82nd Airborne.

By Lee Lawrence | Correspondent of The Christian Science Monitor

Read the complete story from the Christian Science Monitor.
Posted by Mad Padre at 7:16 PM No comments:

From My Workbench - Ruined Factory Model

I am finding that I love modeling scenery as much as I love painting soldiers. I think miniature wargaming has the potential to combine the best of model railroading with toy soldiers to produce visually satisfying results. So that's the theory.

Here's a model in progress. It was originally a Walther model railroad kit, which I wanted to turn into a ruined factory in some war-torn town. The complete story of its creation can be seen here . When finished, the roof will be removable to place chaps (20mm or HO or 1/72nd scale) inside. The details inside are bricks that I chopped up out of foamboard (too big, I think) and the debris and green machine thingy are scraps that my friend James gave me from his auto-parts plant. Much work to do but it's coming along nicely. 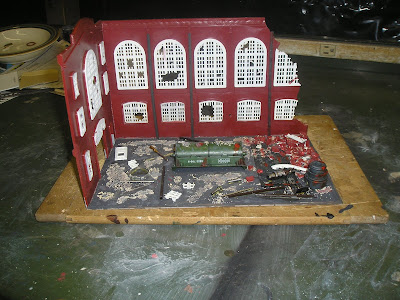 A Sermon for Remembrance Day


This morning I want to offer a few comments about remembrance and hope. These two things are important to today, of course, but they are also important to the faith which gathers us here week by week, year by year.

Why do we remember? The reasons are complex. We remember them because their lives were significant, and because the loss of their potential, so many who died so young, can never be fully appreciated. We remember them to do them honour, because they gave what Abraham Lincoln in his Gettysburg Address called “the last full measure of devotion”, paying the ultimate sacrifice for those they loved and for we who came after them. We remember them because it is our responsibility to remember them, because we owe them. If we decided to cancel November 11th and just forget about the past, we would be the less for it. Our society would somehow be diminished if we abandoned Remembrance Day.

In today’s reading from Luke, Jesus has finally reached Jerusalem. Not everyone agrees with his preaching and teaching, and not everyone agrees that Jesus is the Messiah, the one sent by God to save his people. A group called the Sadducces set out to challenge him. The Sadducces were Jews who did not believe in the resurrection. As far as they were concerned, once you die, that’s it. Game over. They challenge Jesus with the riddle of a woman who in turn marries seven brothers in accordance with a Jewish law called Levirate Marriage According to this law, if a man died, it was the brother’s duty to take his sister-in-law in marriage, and he was to name the firstborn after his deceased brother, “so that his name may not be blotted out of Israel” (Deut 25:5-6).

The Sadducces I think are like people who go to a funeral and say, “Well, Joe’s dead, he was a good guy, but he’s gone and the best that we can do is remember him”. As far as they are concerned, the best we can hope for is to be remembered by having our name and our memory continue in our descendants, which is the purpose of Levirate Marriage. If God intended to do something as radical as raise people from the dead, he wouldn’t have given this law to his people. The women in the riddle wouldn’t have needed to remarry, because her first husband would be alive again on the day of resurrection. For the Sadduccees, God is either trapped in history or he has lost interest in it. Their God has set things up a certain way, cleaned his hands, and said “this is the way it’s supposed to be, muddle along as best you can.”

But as I said, we are people of hope because we believe that God isn’t finished with history. God isn’t content with the way things are. God will change things for the better. Jesus tells the Sadducees something that human categories like marriage will change in heaven, so their question is irrelevant. We will be changed into “angels and .. children of God, being children of the resurrection” (Luke 20:37). We don’t really know what Jesus means by this. Certainly it tracks with what St. Paul says elsewhere about how human categories like gender, race, and social status will no longer count in God’s new creation (see Galatians 3:27-28), but other than noting this continuity I think it’s vain to speculate too much about what this might mean. All we can be sure of is that we will be made new, and made better.

Personally what I take comfort from is what Jesus goes on to say. “And the fact that the dead are raised Moses himself showed, in the story about the bush, where he speaks of the Lord as the God of Abraham, the God of Isaac, and the God of Jacob. Now he is God not of the dead, but of the living; for to him all of them are alive.’” (Luke 20:37-38). Take a minute to let that sink in. God is talking about his memory. He is saying that in his eternal memory, all of us are alive – Abraham, Isaac, Jacob, the seven brothers of the woman in the riddle.

It would be like God saying to me “I am the God of Michael Peterson, and of his father Allan Peterson, and his father Arthur Peterson, and his father …”. Now I knew my father, but after his death I realized that there were many things about him I didn’t know and would never know. My grandfather Arthur was dead long before I was born, and I only new a few things about him. I have only the vaguest idea of who my great-grandfather knows, and likely never will never know more. I can try as best I can to pass what I know of them on to my children and, perhaps, my grandchildren, and give them the few mementos that my father left to me. But memories fade, stories are lost, and I have no guarantee that those to come will remember Arthur, or Allan, or Michael.

Likewise we who gather today face an impossible task. We can try to remember the dead of our wars as best we can. We can do wonderful things, like the project this year of giving each schoolchild who went to Vimy Ridge the name and details of a Canadian soldier who died in that war. We can talk to the veterans while they last, and capture their fading memories. We do the best that we can, but we know, as our hymn today reminds us, that “time like an ever-rolling stream bears all its sons away”. Not so with the mind of God. We have the promise in the words of our gospel that God will not forget us.

Let me close by asking you to try, if you can, to let go of one image and replace it with another. Try to let go of the traditional image of God’s memory, the image of that big book at St. Peter’s desk where all of our misdoings and mistakes are kept for the day of judgment. Think instead of God remembering all of you that is important – who you loved, the best that you can be, your fondest hopes and greatest dreams, your most selfless moments. Think of God holding these things clearly in his mind, as clearly as your best and brightest memory of your childhood summers, and brighter still. Finally, think of God calling these memories forth on the day when he will recreate the world, creating you anew, as something angelic, a child of the resurrection. On that day none of us will be forgotten. We will be remembered, fully and gloriously, along with our grandparents and their grandparents and all the names on every cenotaph across this country and overseas, to stand with those in the graves marked “A Soldier Known Unto God”. For surely that is our best and brightest hope, that each of us is “known unto God”.


A script and outline of part of the day's events is posted below. You are more than welcome to use it or adapt it as you see fit.

Morning Session
Facilitator talks about the importance of saints. We believe as Anglicans that saints are role models – they teach us how to be Christian. By their example, we learn what it means to live the kind of life that God wants us to live.
Today we are going to have a visit from a very special saint, St. George! And here he is now!
Voice off:
Left, right! Left, right!
Marching off, to the fight!
Gotta be strong, do what’s right!
Gotta love God with all my might!
Left, right! Left right!
Company ...... HALT!

Well, hello there!
I say, I’ve been marching for a long, long time.
I could use a bit of a rest.
Do you mind if I take off my armour
And sit down for a visit?
Posted by Mad Padre at 12:12 PM No comments: