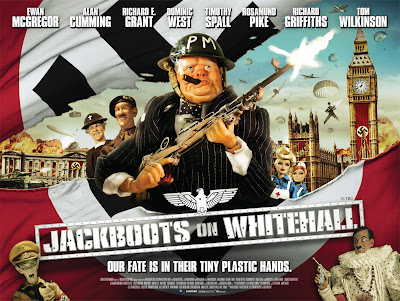 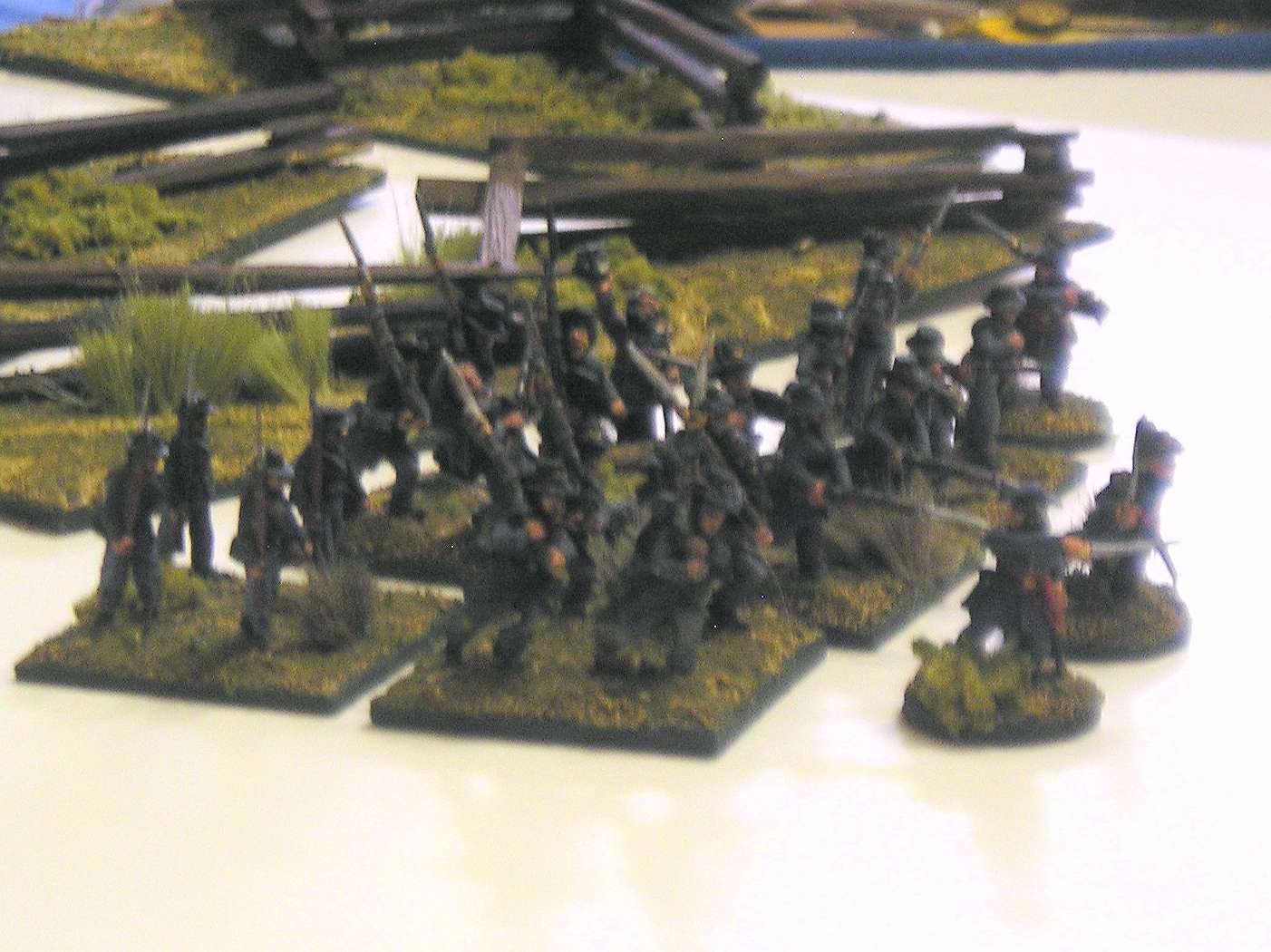 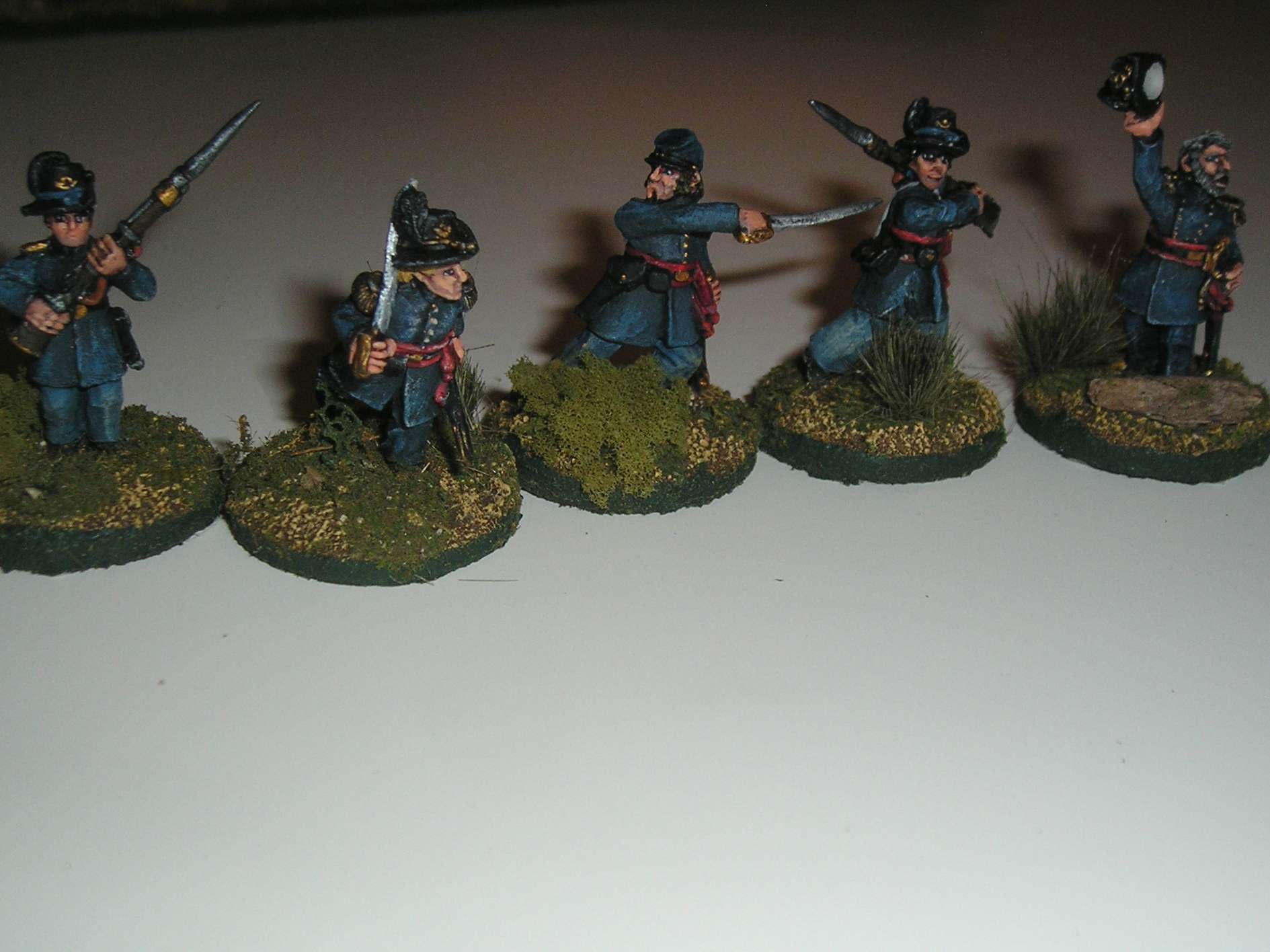 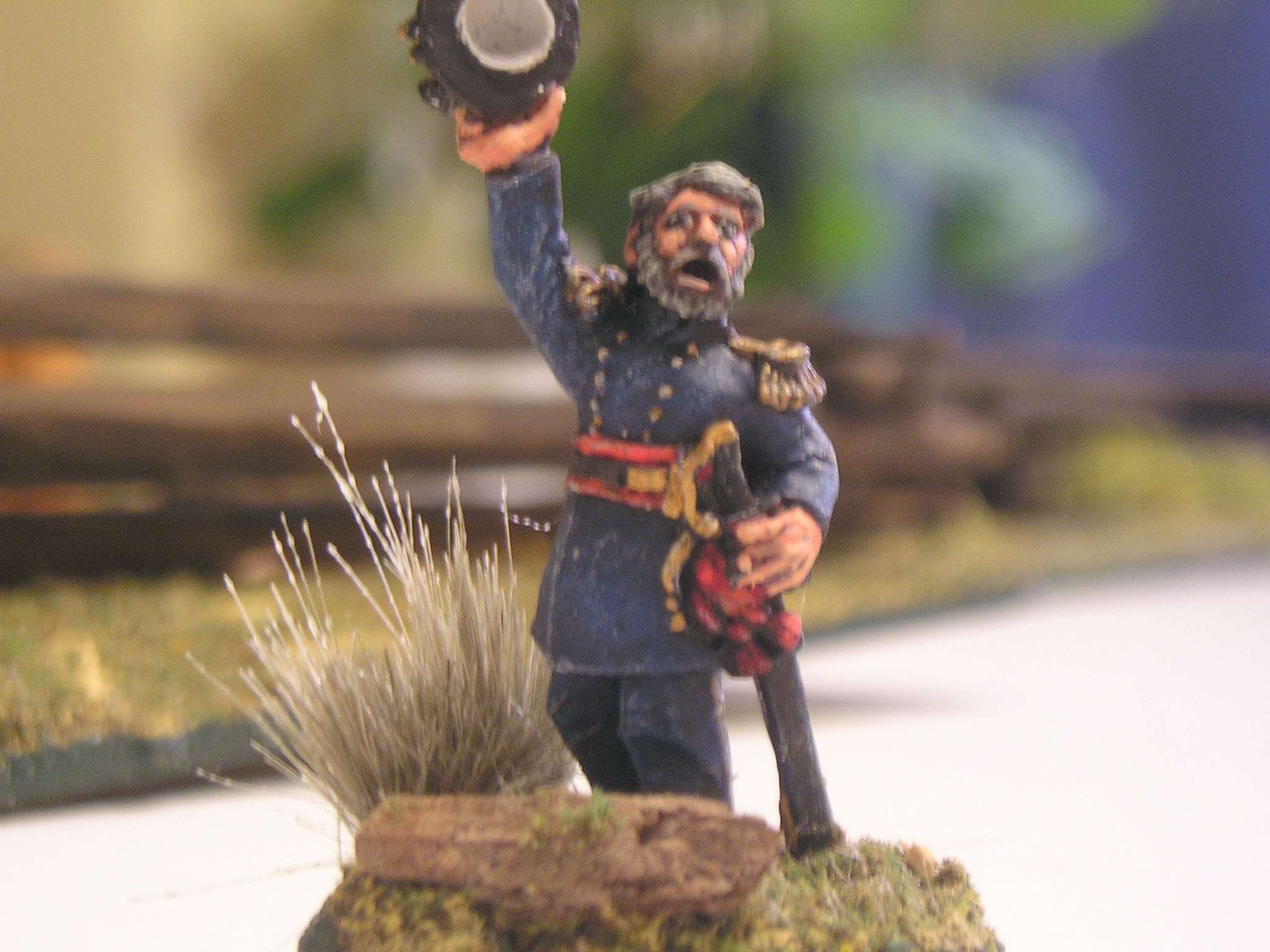 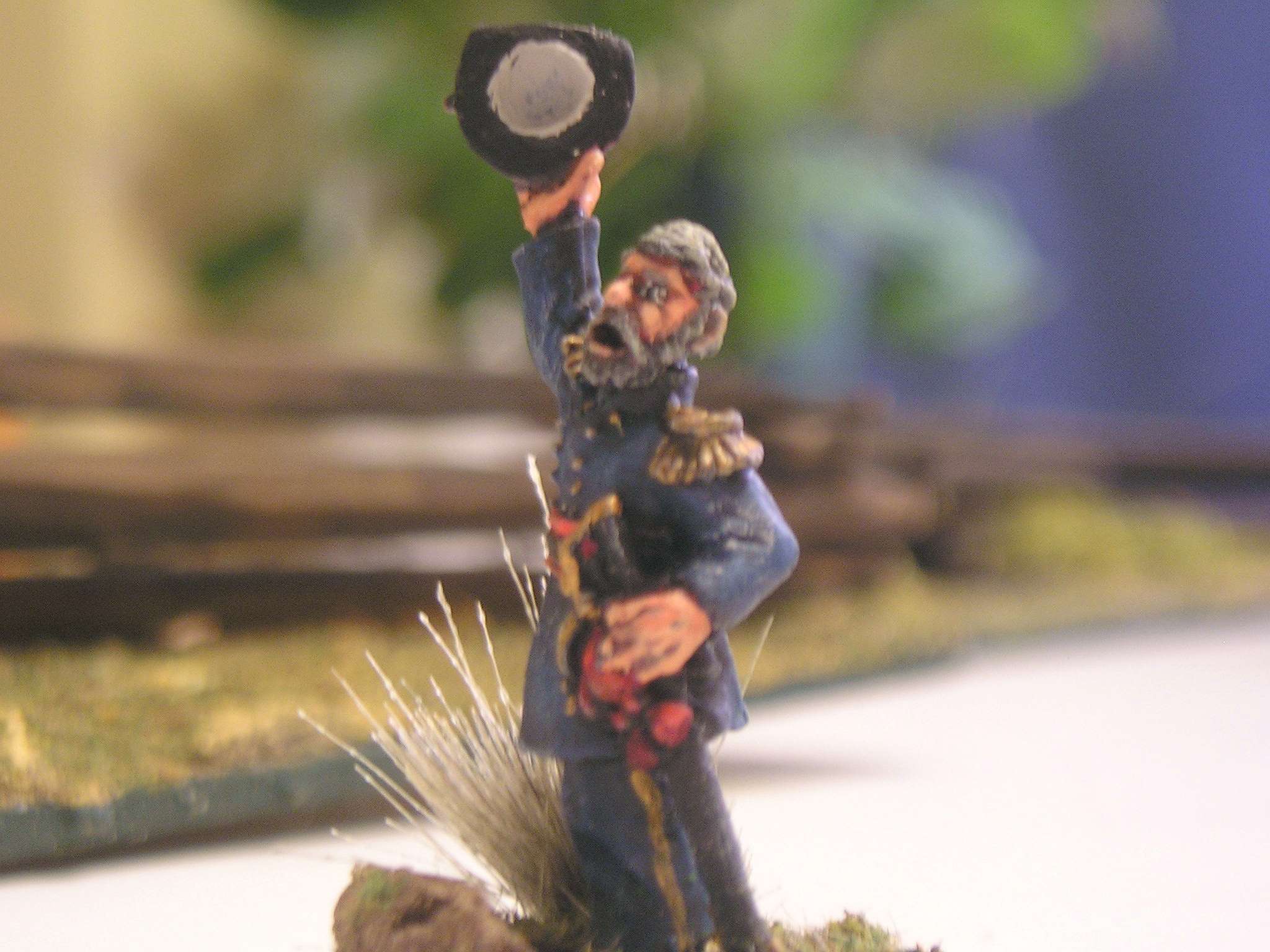 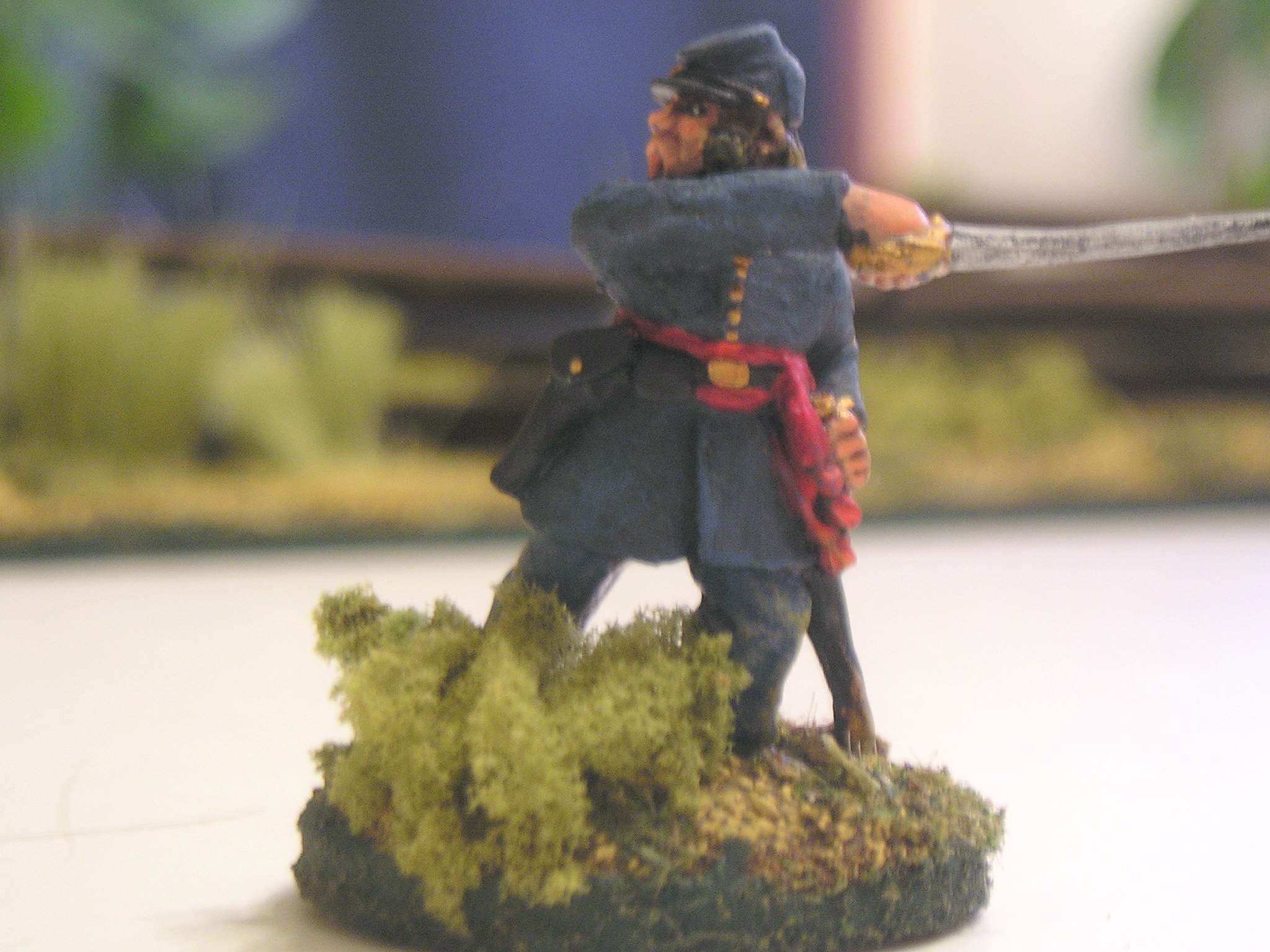 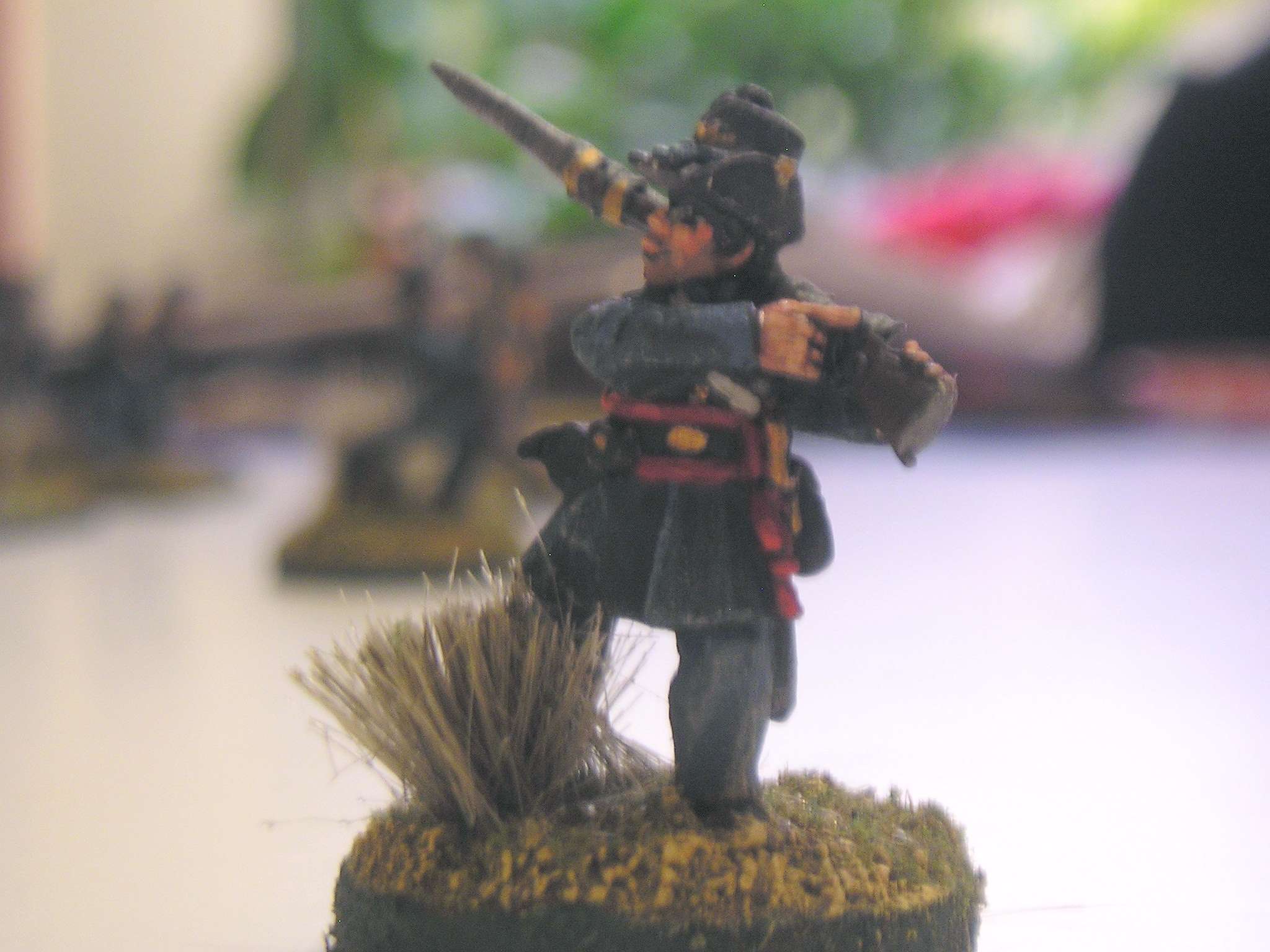 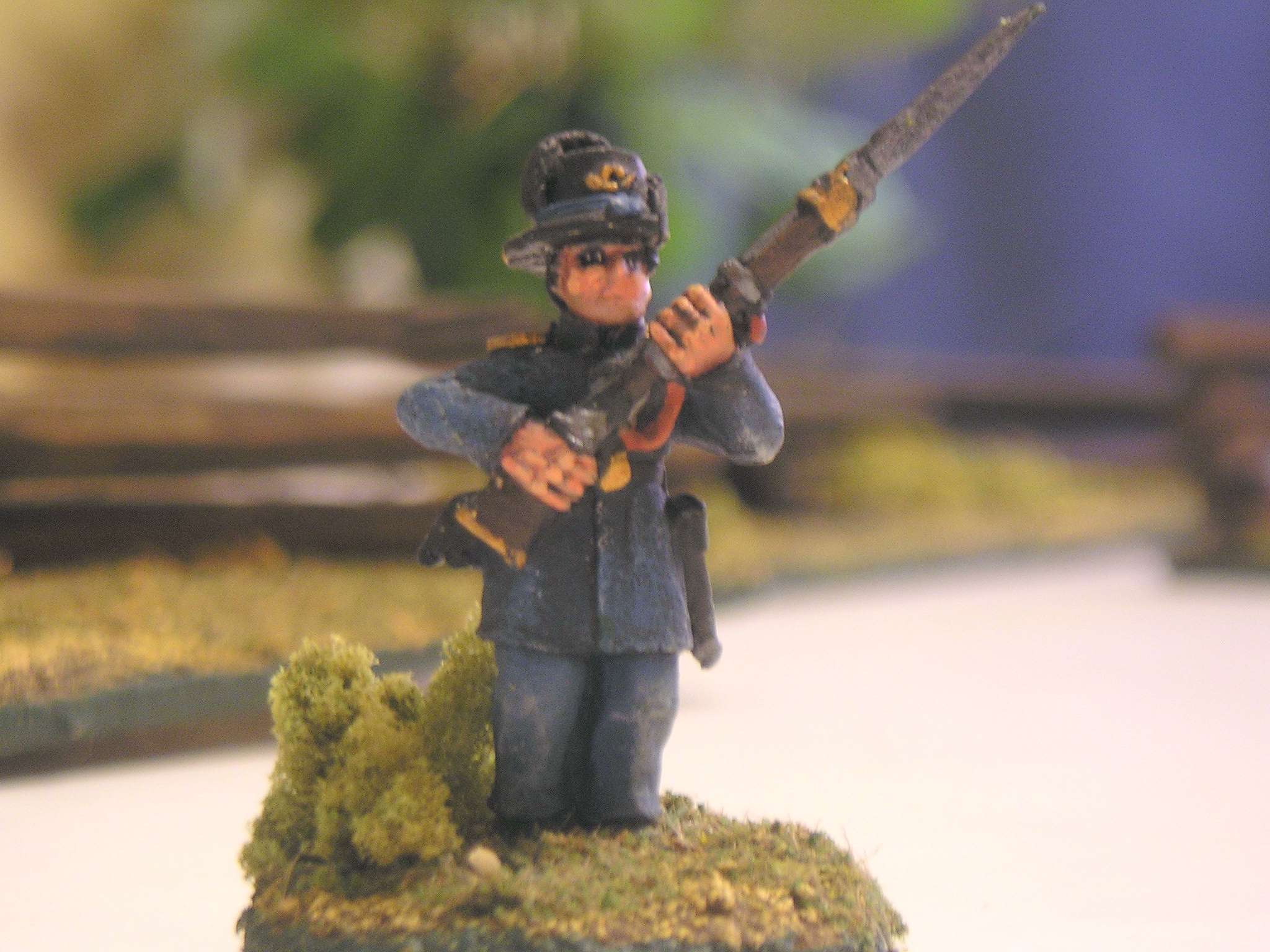 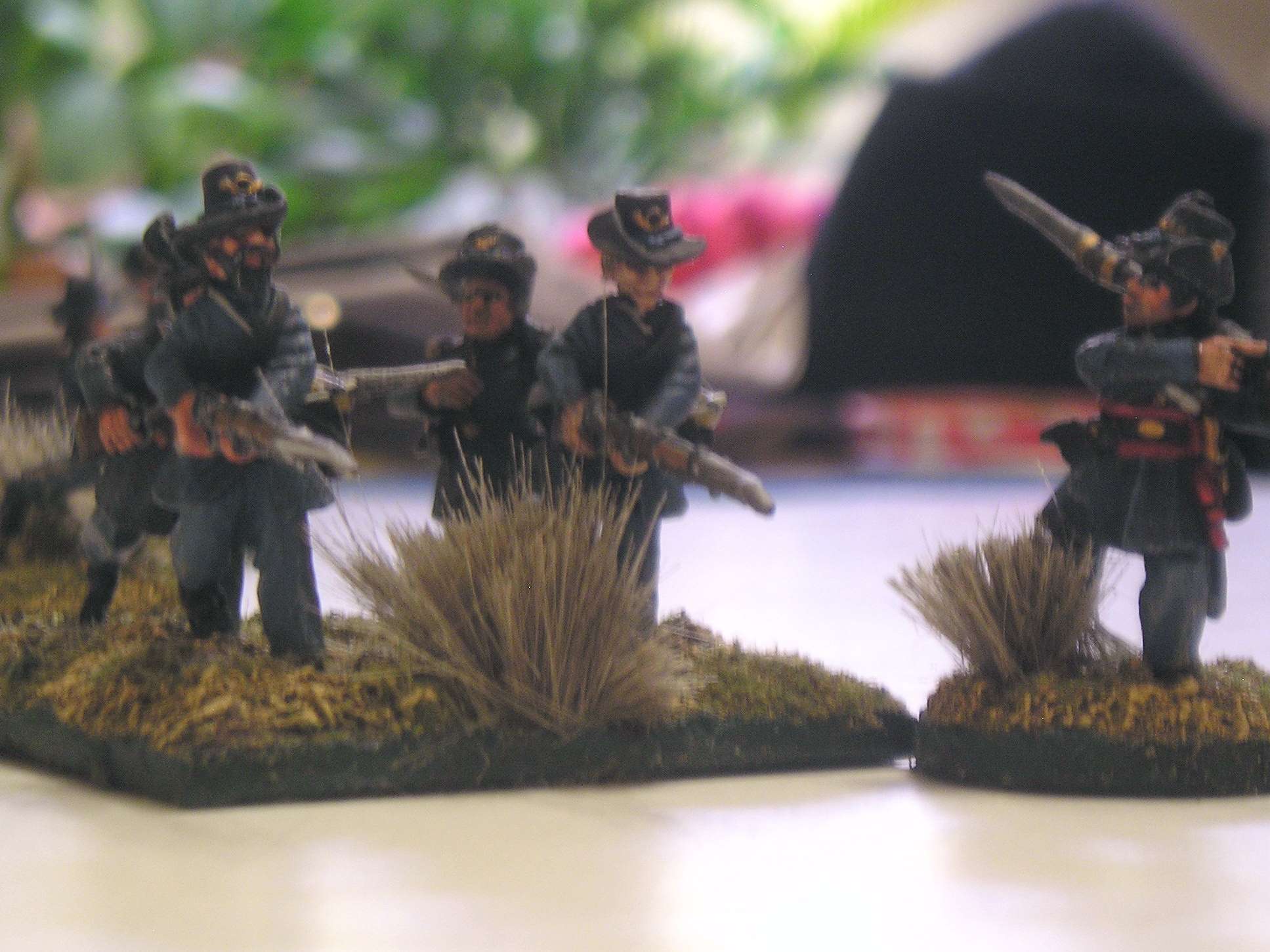 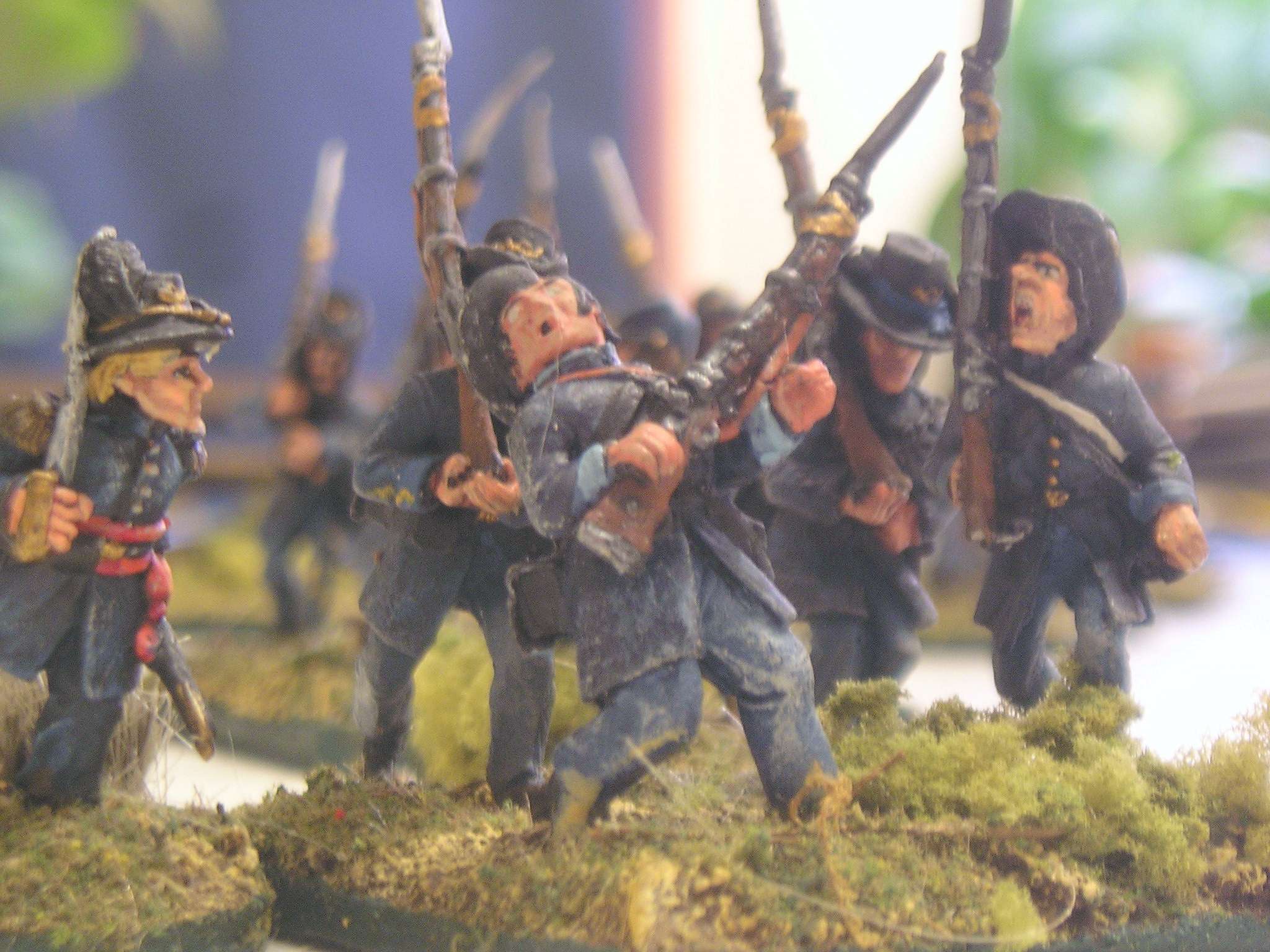 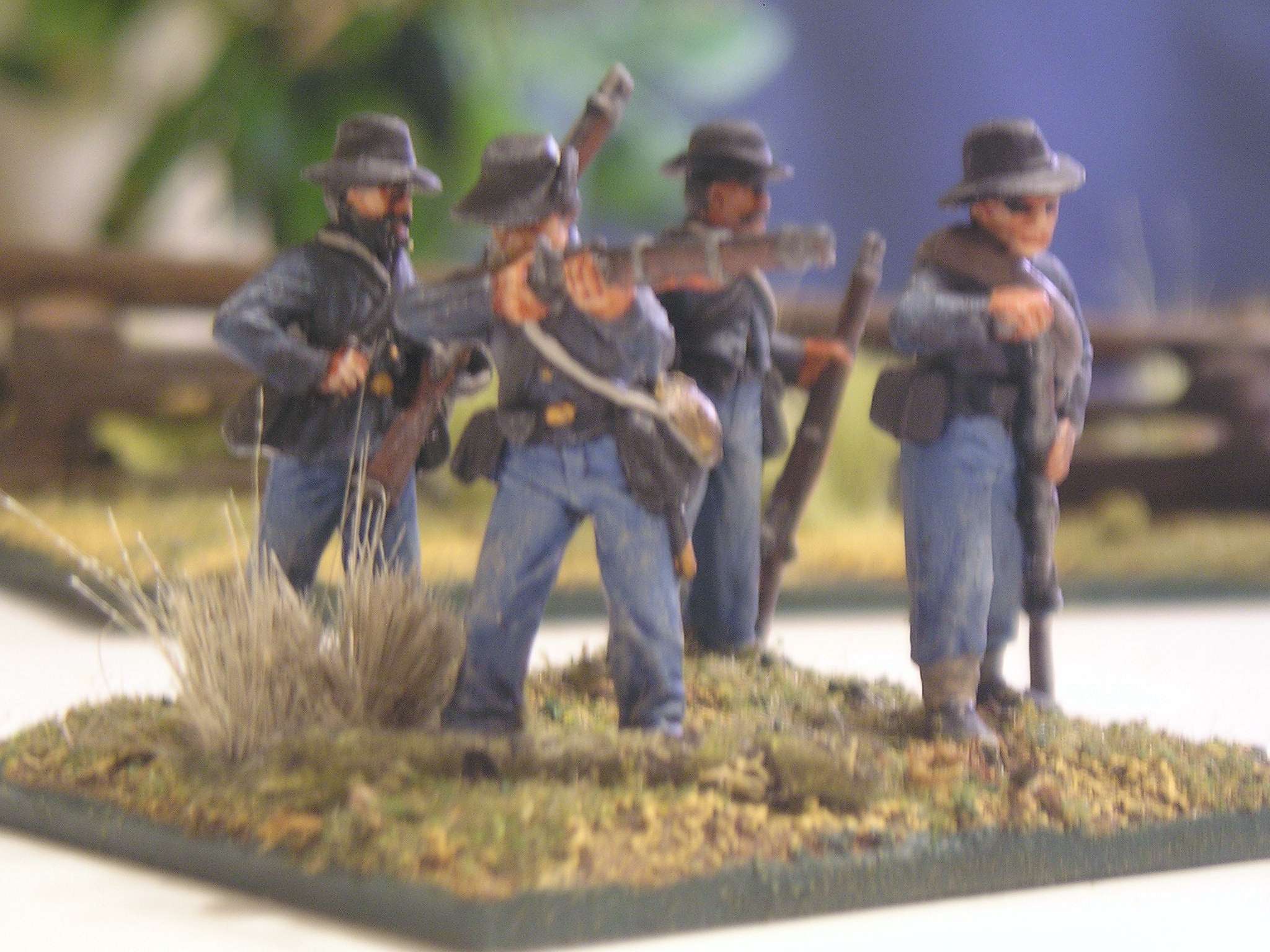 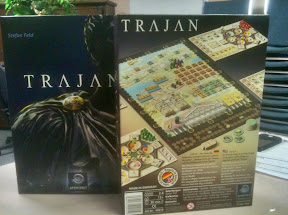 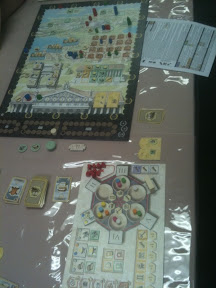 
- Posted using BlogPress from my iPhone
Posted by Mad Padre at 5:27 PM 3 comments:

I've been having a debate with myself (I recommend this practice, as one is always guaranteed an excellent and stimulating opponent) as to the merits of splashing out large sums on scenery for the wargames table.

A case in point are these river sections I bought myself as a birthday present last year. I bought a large bag of JR Miniatures 28mm rubber river sections from the local hobby store in Calgary, Sentry Box West. I think the price tag was about $70 Cdn and I thought it seemed a good price to get a decent sized water feature on the wargames table. I believe it's item 3224 in the JR Miniatures catalogue if you're interested. 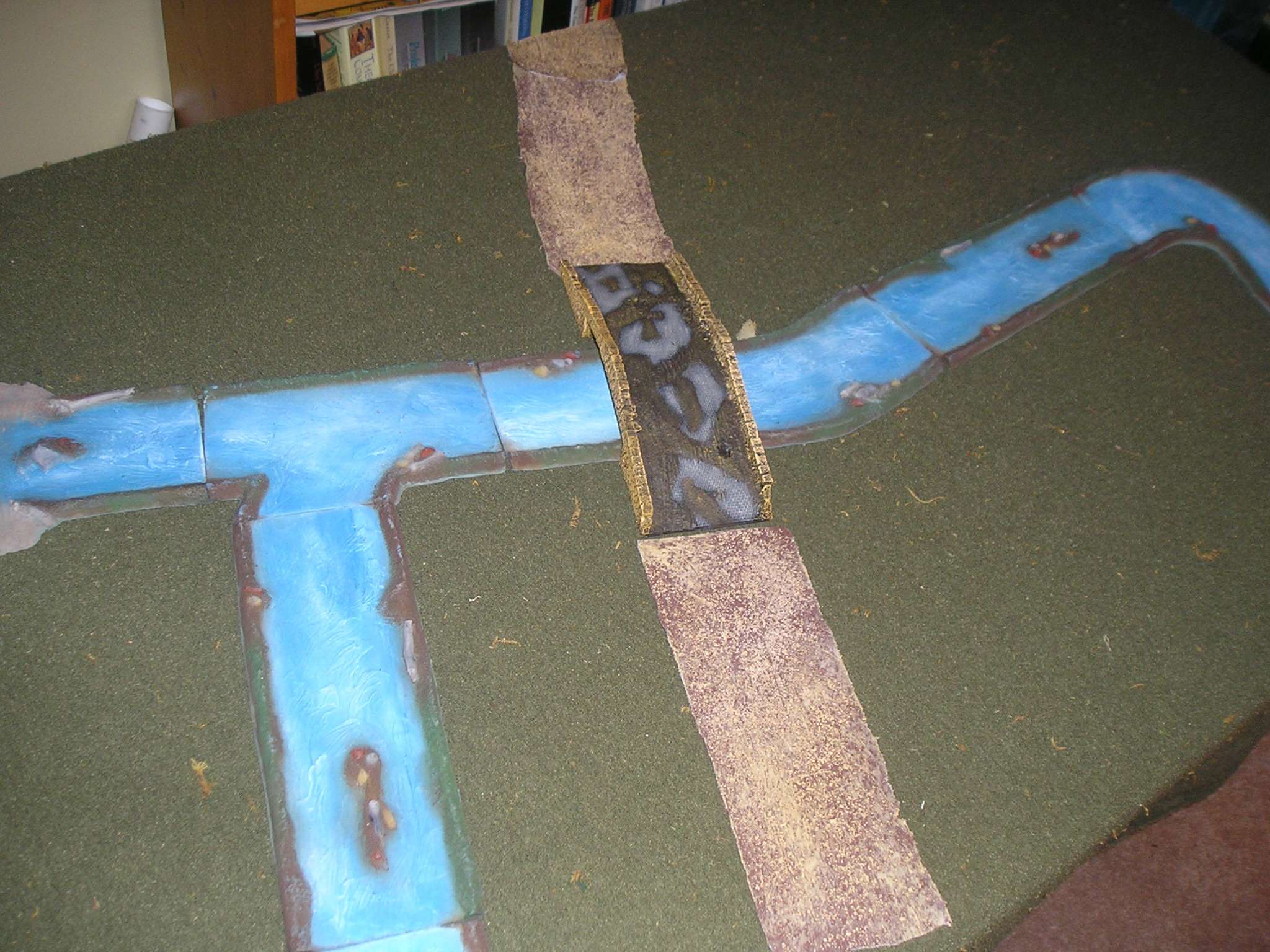 Previously I had experimented with making my own river sections using some sort of clear polymer caulking material that I had bought from a building supply store, Home Depot, for one tenth of the cost of the JR product. The results of that effort can be seen here. I was somewhat satisfied with that experiment at the time, but was never sure how to paint it (green? blue?) so it didn't look like shiny plastic sitting on the table.

I think what swayed my thinking at Sentry Box West was that I have precious little time and would rather devote it to painting figures than to creating scenery. Besides, buying the river sections gave me an incentive to finish painting this bridge, also a JR Miniatures product, which I had bought on a previous trip to Calgary. The bridge is 15mm scale, intended for my WW2 collection. In that spirit, I grabbed two half-finished Staghounds from my painting table to illustrate the scale. 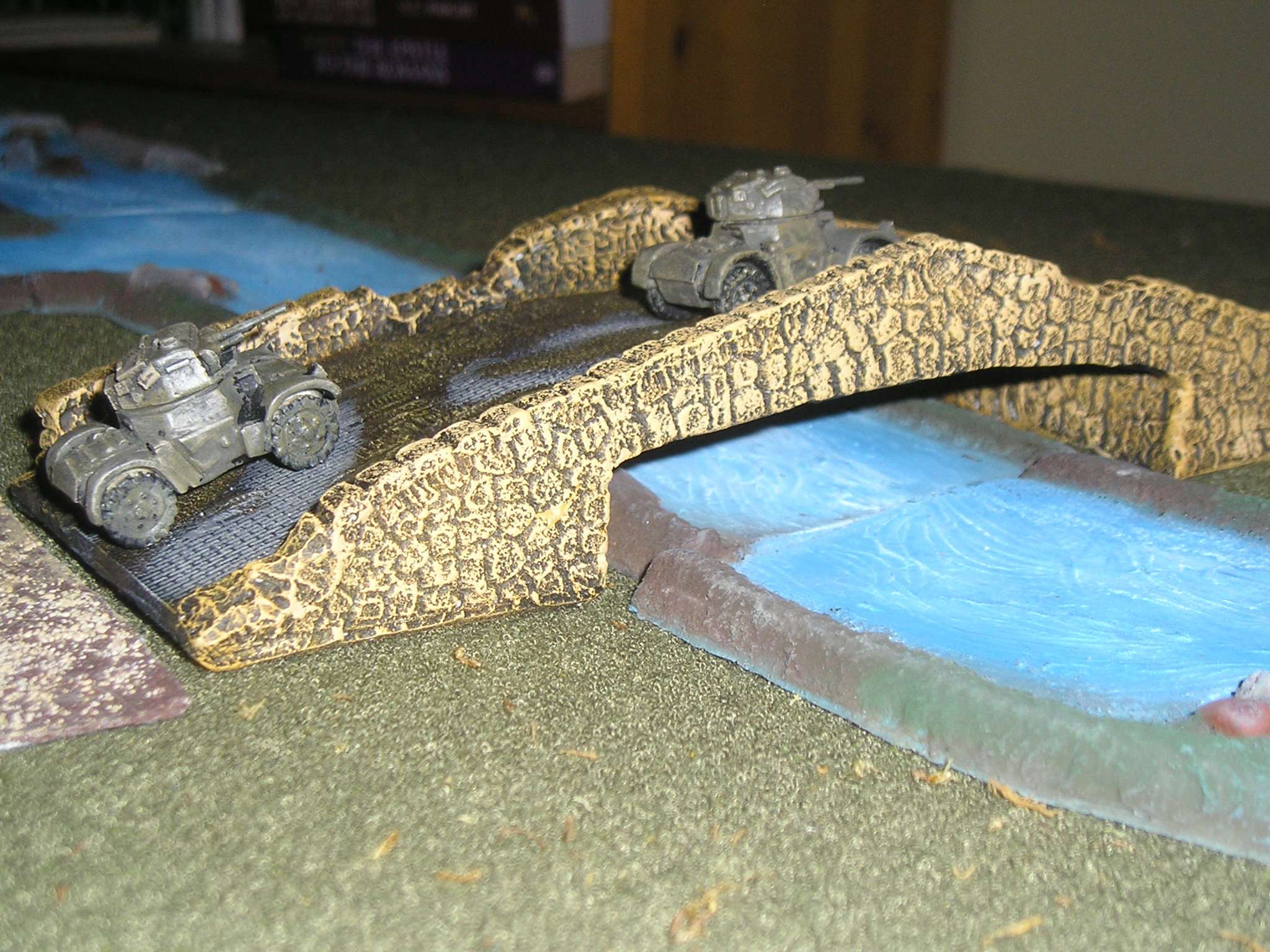 Around New Year's I took Mrs. Padre back to Calgary to shop at her favourite camera store, which, conveniently, is a few blocks from Sentry Box West. Leaving her to browse the tripods and filters, I dashed back to SBW and saw a JRM river section with a ford which I bought to expand my river system. A ford is always useful, and my get me to drag out my LOTR kit for a Fords of Isen scenario, with heroic Rohirrim holding the ford against the hordes of Sauron. Here are some LOTR stand ins. 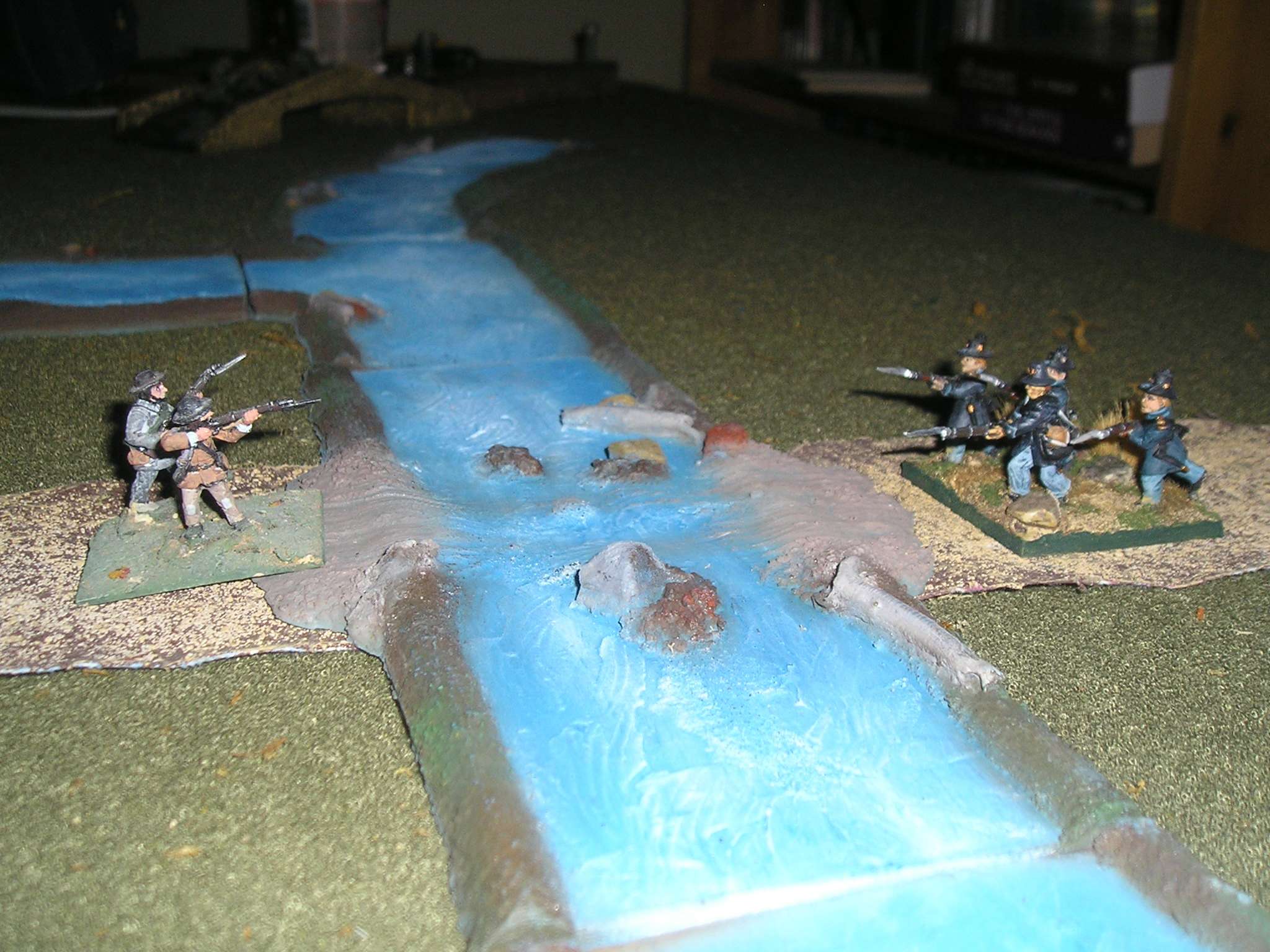 So I was doing fine with my purchases and looking forward to getting them into a battle when I came across this post on Ross Mac's wonderful and well-visited blog, Battle Game of the Month. Yes, you guessed it, the "Bluegene River" is made of exactly that, old torn denim jean pant legs. Seeing Ross' pictures made me second-guess myself. Had I opted for an expensive and unnecessary purchas when, with a little audacity and imagination, I could have put down some old denim and said "voila, there's a river?"

I suppose it comes down to what we want to achieve. For me, after years of graduate school and clerical penury, I have some spare cash and the desire to make the wargaming table look pretty, something closer to the colour pictures one sees in the hobby magazines. Beung able to do something like that makes me happy. The table for the Plasterville Mills skirmish I blogged here in November is one of the nicest I've ever done. But that's me. A gamer like Ross, who I respect more than I can say, has his own style, something more consciously old school, perhaps, and that's the charm of his blog, because he achives that look consistently and does it well.

So perhaps the debate is settled for now. I will continue to do some scratch-built scenery (trees and hills, particularly), and buy some when it's pretty, and try not to feel too guily about it one way or the other. What about you, gentle reader? Do you have this debate with yourself? And if so, how do you resolve it?
Posted by Mad Padre at 5:54 AM 6 comments:

Ed's note - I'm going to let his post remain here because it amuses me. It was intended for my other blog, what Richard Clarke of Too Fat Lardies once called "The God Blog". That blog is where I follow my other interests, including running. The post below got sent here because it was my first time experimenting with a blogging app for my iphone. During that experiment I discovered that trying to copy and paste links on an iphone is rubbish. - MP+


This archived piece from the Globe and Mail website on the "Forks vs Feet" debate conducted at the U of Ottawa last May just spurred my resolve to run more in 2012. Executive summary: the more you run, the more calories you burn. Diet alone won't make you thinner. This may not be news, but I found it helpful.


- Posted using BlogPress from my iPhone
Posted by Mad Padre at 1:10 PM 2 comments:

Over Christmas break, in between painting ACW guys, I found the time to finish a project that has been languishing half finished for over a year. These chaps are from the Battlefront Miniatures 15mm late war German mortar platoon blister. There were several other fellows, riflemen and leaders, that will get based later. For now, these four bases will go to strengthen my 12th SS troopers, worthy opponents for my Canadians. They will also make a great incentive for me to break out my copy of Too Fat Lardies' I Ain't Been Shot Mum, Third Edition. 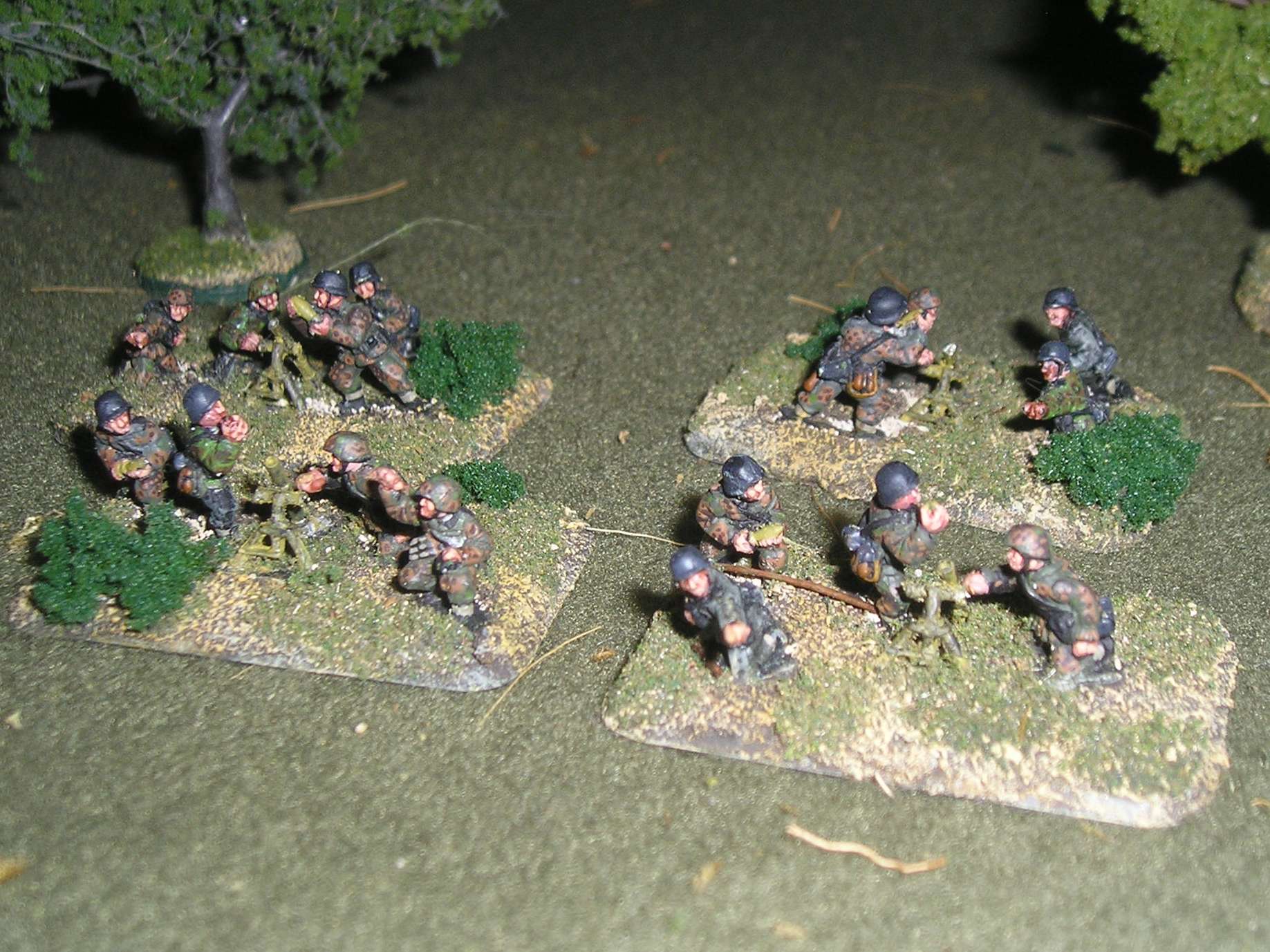 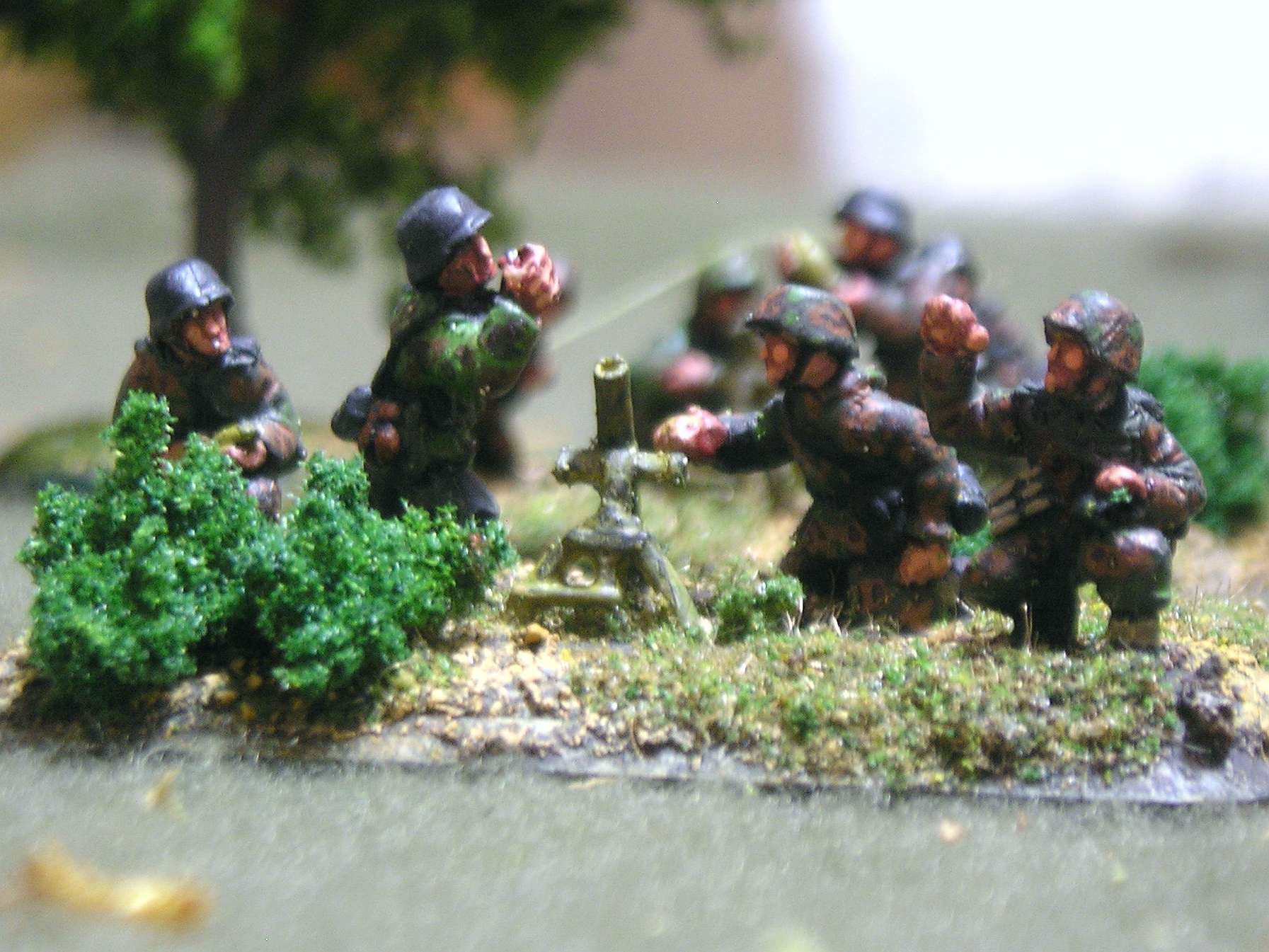