“OK, fellas, I’m Luigi, and I’m hear to give you a rousing welcome as we get ready to take off and go bomb the Krauts, so listen up, because Uncle Sam put a lot of dough into training you apes, and if you want to ever want to see Tonawanda again, you better fly a tight formation and stay alert.  It’s a good game, and the box is fun to sit in. OK, let’s go." 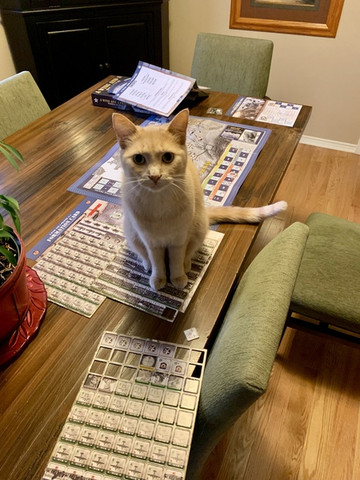 Thanks, Luigi, I’ll take it from here.   Readers of this blog will know that I have a fondness for the air war over Germany in World War Two, so A Wing and A Prayer: Bombing The Reich by Lock and Load Games isa  2016 release.   It’s a solitaire game, though it can be played with a second player as the German defenders, and is simple enough to play.    The US/solo player is given a squadron B17 bombers, and has to make it through a series of missions in campaigns of various lengths.    There is also an option to play a squadron of B24s.

As you can see from the map, movement is point to point, with Occupied Europe divided into boxes containing various targets and flak hazards.   Each campaign has a variety of targets, each represented by one of the cards seen below.   The early war campaign features targets mostly in France and the Low Countries, and the later campaigns get much more hairy.   Each target is rated for its flak defence, difficulty to bomb, and the amount of bomb damage it requires to reduce and/or eliminate.   You get Victory Points by successfully bombing targets and shooting down enemy fighters while avoiding bomber losses. 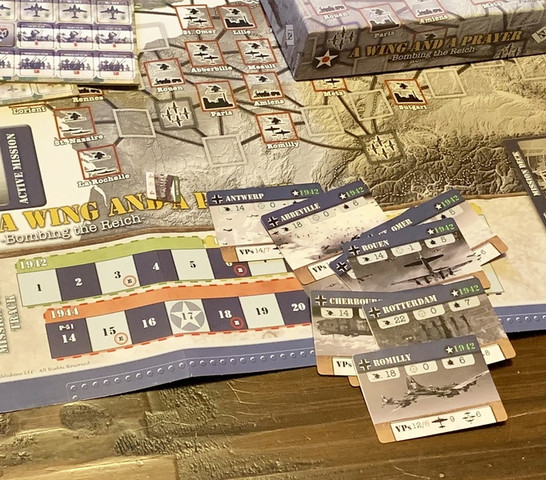 Once you get your target, then it’s time to get after it.   For the very first mission of the short 1942 campaign, I drew Lille as a target, which seemed quite easy, only three squares away from England.   I could employ all twelve of my B17Fs, and laid them out in the standard box formation of Lead, High, Low and Tail elements.  Unfortunately, I rolled badly for cloud cover, so my bomb aimers would have to squint through the clouds to see the target.  Luckily for me, I rolled well for escorts.  As you can see at the bottom of the formation card below, I have an escort of 6 P47 Thunderbolts, which have the range to accompany me all the way to the target. 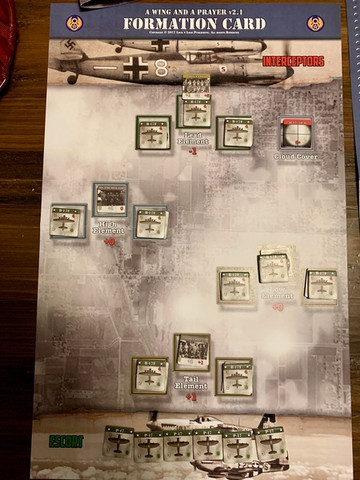 One of the features which gives the game its quality is varying bomber crew quality.   You start off by getting one crack crew, two good crews, and nine green crews, all rated for flying, air combat, and bomb accuracy.   I employed my crack crew, “Hells Angels”, to fly the lead plane in the formation.  If they make it to the target, the formation benefits from their accuracy bonus when bombing. 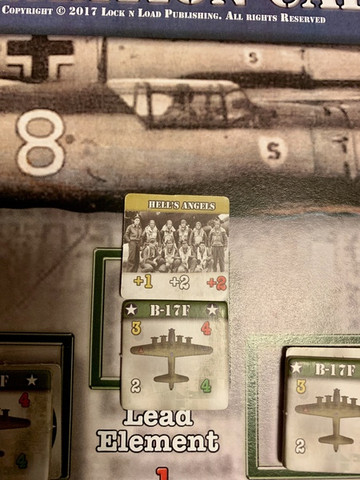 Once your squadron is in the air, there is an events table to check, possibly leading to enemy fighters, a mechanical malfunction in one of your bombers, or something positive such as a visit from Lady Luck.  The chances of an event increase the further out you are from your home base in England.  In my case, my lead bomber had to check for a mechanical problem just before the bombing run at Lille, but the crew of Hell’s Angels were fortunate.   Once over the target, there was flak to check for, using a combat results table which distributes the attack factors (in this case the flak) over the number of bombers.   Since my squadron was at its full strength of 12, the distribution was very favourable, so that each bomber had to roll “12” on two D6 for something bad to happen.   Everyone got through the flak in and out with no damage to any aircraft.

A similar process happens for the bombing.  Each plane has a bombing, which is multiplied on the same Combat Results Table with possible column shifts for the difficulty of the target, skill of the lead crew, etc.   With the bad clouds over Lille, I got nine chances to roll a 6 on 1D6, with each hit counting for so many damage factors against the target.   I only got 1 hit, which was not nearly enough to significantly damage the target.   Lille will have to wait for another day.

Once your squadron gets home, you can automatically land them, or using an optional rule, check to see who makes it carefully.  Damaged planes, and/or planes with green crews, have a worse chance of landing.  Using the advanced rule, one of my B17s suffered light damage on landing, and had to be placed in the Not Ready box.   For the squadron’s next mission, I will have to check to see of the plane can be repaired in time to go again.    Fewer bombers will increase the risk to the remainder if its not read 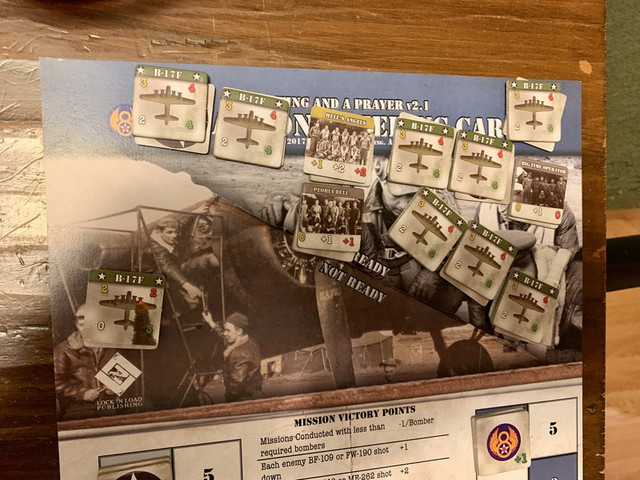 If there is a flaw with A Wing and A Prayer, I suppose it is repeated die rolling for all these steps.   To complete the raid on Lille, with flak going in and out, and the bombing, I had to roll a total of 1D6 X 57 which, along with checking multiple charts over three separate sheets, seems like a lot of work.   Also, the game is abstract enough that there doesn’t feel like there is much emotional investment in the fate of individual crews.   Perhaps that will change as I run multiple missions, but for now these boys seem rather expendable.   Perhaps that was how the bombers’ commanders really viewed them.

So, an agreeable enough game, which took me about an hour to play.     Hopefully we will revisit Generic Squadron soon for its next mission.

A Game Too Far?

My son John was visiting me from BC this summer, and expressed a great interest in my board games collection.   John is a miniatures gamer, and knows W40K like the back of his hand, but he was intrigued by old school hex and counter games.    His birthday was coming up, so I gave him three websites, GMT Games, Compass Games, and Vassal, and told him to pick whatever game he liked that was still in print and had a Vassal module so we could play i by email.   More to follow on that.

I am not sure exactly how many Market Garden games a chap needs in my collection, and to be honest, my collection has a bit of a mind of its own and hasn’t been effectively curated over the years.

I have four MG games by my count.   One is an Avalon Hill classic, and is a sort of operational/tactical hybrid, focusing on the British defence of Arnham.   Designed by Courtney F. Allen and published in 1981, it featured an ingenious area impulse movement system for its day and spawned several other AH games using the same engine, one on Stalingrad and the other on Monte Cassino.  Breakout Normandy used the same basic engine but at a larger, more truly operational scale. SOA is the only Market Garden game I own that I’ve actually played head to head, and it is a much better played H2H than solitaire. Hell’s Highway (published 1983) is a strategic level game by John Butterfield, who was one of the stable of SPI designers who went to Victory Games.  John is coming to a gaming convention in March 2019 in Toronto, which is kind of exciting.   Maybe by then I will have actually played this game, or at least peaked inside the box. I bought It Never Snows shortly after MMP published it in 2012, partly from what I’d heard about it and partly on the strength of its designer, Dean Essig, who has won a hockey sack of awards and has a long and distinguished design resume.    Alas, it is still in the shrink wrap.    Hopefully when I retire I can get to grips with it. So, going back to my son John - what did he choose, but a Market Garden game?    Holland 44 is a 2017 GMT title, designed by Mark Simonitch, and is an operational, battalion-level game, starting with the airborne landings and ending on 23 September.  As with the other big titles (Hells Highway and It Never Snows), the game is a race to relieve or reduce the airborne bridgeheads before the Allied ground forces can get there. Notice how GMT recycled some of Rodger MacGowan’s SoA artwork for the back of the box! Well, that’s all I have to tell you for now.   I am waiting for John to tell me that he’s digested the rules (he is a demon for memorizing complex rule books) and then deciding what scenario and which side to play.   If you are interested in playing Holland 44 with me via Vassal, by all means let me know, I could use the practice.