One of my Christmas presents to myself was the set of American Civil War miniatures rules, They Couldn't Hit an Elephant, published by Too Fat Lardies. Like other TFL systems, these rules emphasize command and control and the friction of battle through command points for leaders and cards that activate units and leaders in a somewhat random manner.

For this game, my son John and I put my entire ACW collection of 25 to 28mm figures on the table. We used the TCHAE random leader generator for 1865, and managed to get a bunch of second rate leaders (John says his leaders were worse than mine). We had two brigades (five regiments total) and two 3 gun batteries each. Probably we had too many leaders (two brigadiers and one divisional commander) and were so spared some bad command and control headaches. We each took two real blinds and one dummy, though John chose to use his dummy blind to group his two batteries of rifled cannon together.

John's Union forces enter the table under blinds. My confederate commanders would do a lousy job of spotting them. 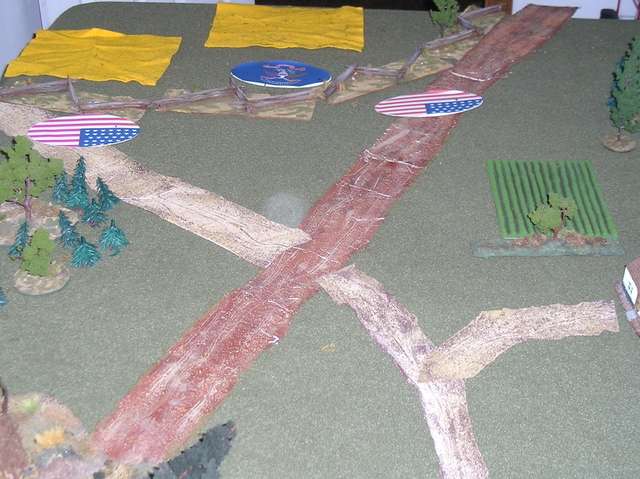 John spots the Mississipi brigade of General Stanley McWhiskers (named in honour of our newest cat) advancing in column of march. Once a force on a blind is spotted, it must be deployed on the table. 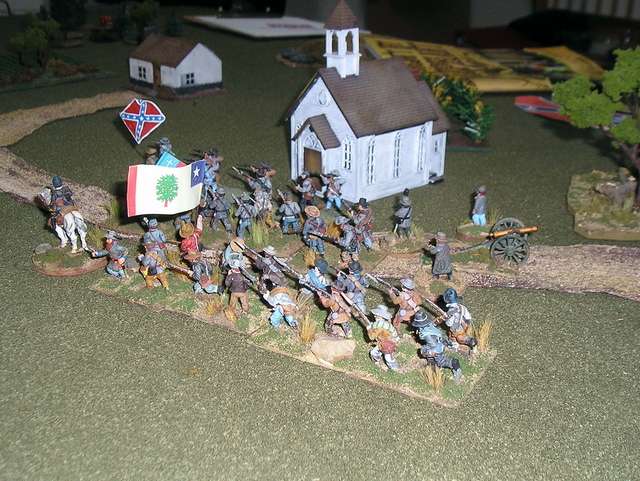 The cards favour one of my brigades, the Texans under General "Lone" Star, who claims what will soon become a strategic hill. 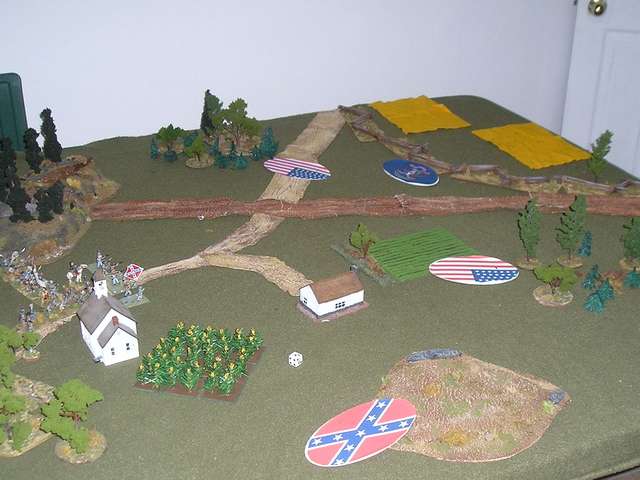 John spots the Texan brigade and they are deployed on their hill. A Union blind is coming up fast against them - it is a dummy? I haven't been able to spot it yet.

The Texans prepare to hold. The figures are mostly Old Glory - the artillery commander and the chap on the horse in the background are Dixon figures. 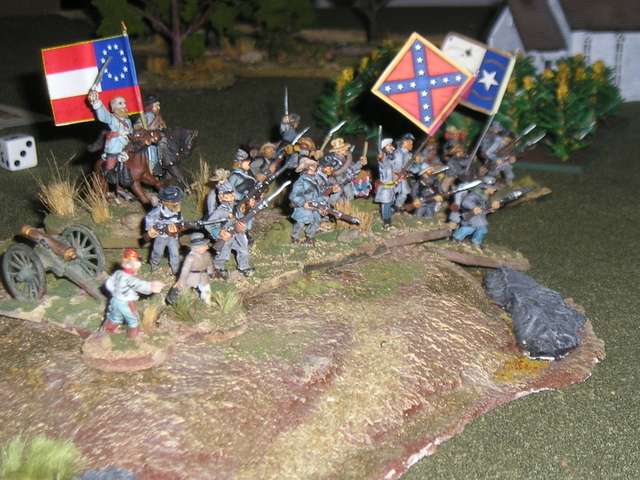 John reveals his brigade from its blind and throws it into battle. The lead regiment are painted as the Union Iron Brigade and are a mix of Wargames Foundry and Old glory figures. The lovely flags are from GMB designs. John lead with the men of the Iron Brigade and supported them with the Irish of the 69th New York. Like many Civil War commanders new to the battlefield, John found it hard to coordinate his attacks. At this point John realized that not allocating his batteries to direct support of his infantry brigades was probably not a good idea. The hill advantage to the defending Texans certainly worked against John's bluebellies. 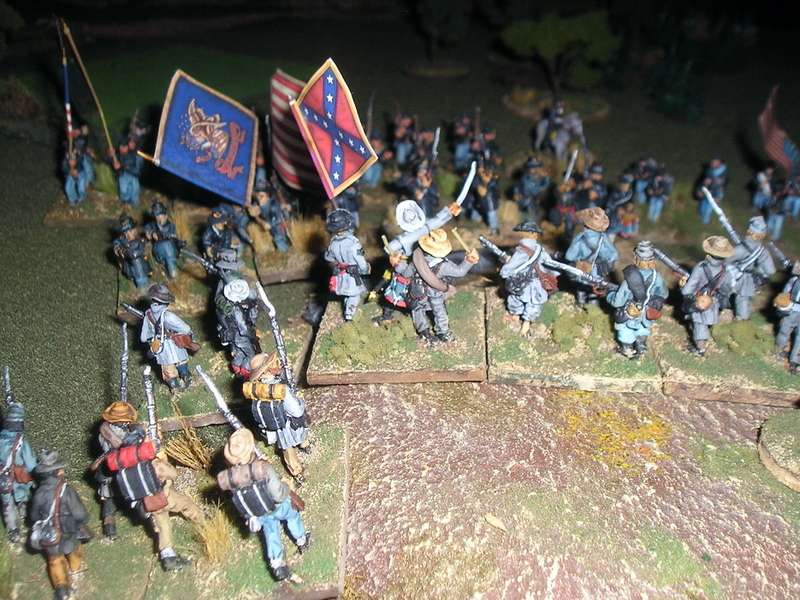 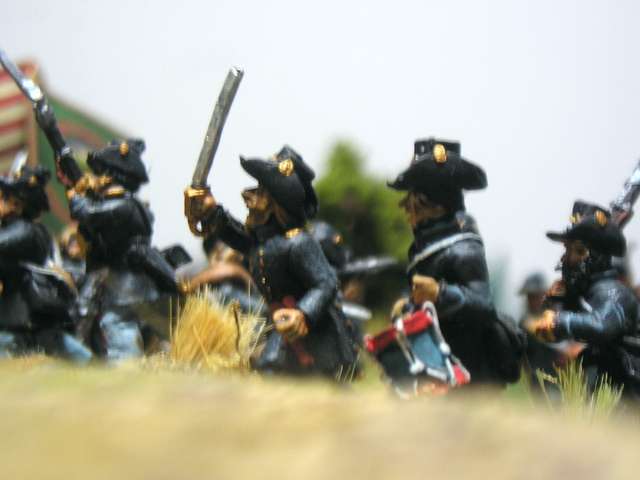 "Hold 'em, boys!" General Star anchors his two regiments of veteran Texans. He would lead a charmed life in this game.

In the centre of the table, John's massed Union battery comes of its blind and engages the skirmishers screening the advance of McWhisker's Mississipi brigade. the artillerists are Wargames Foundry - the Union infantry in the background are ancient Minifigs figures I started painting back during the first Gulf War. One of the rules we forgot was the ability of commanders to use their command pips to direct the fire of artillery more effectively. We both had commanders to spare and they might have made the artillery fire more effective. 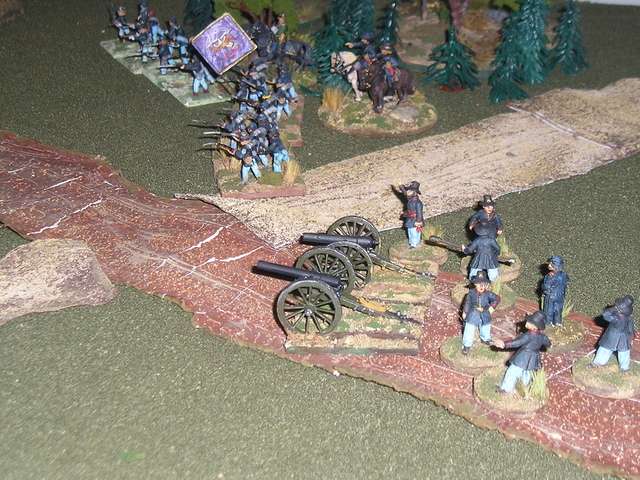 John's other brigade, two regiments of average Union infantry, comes off its blind facing McWhisker's brigade. With his next card, John would adroitly move this brigade to completely flank McWhiskers. 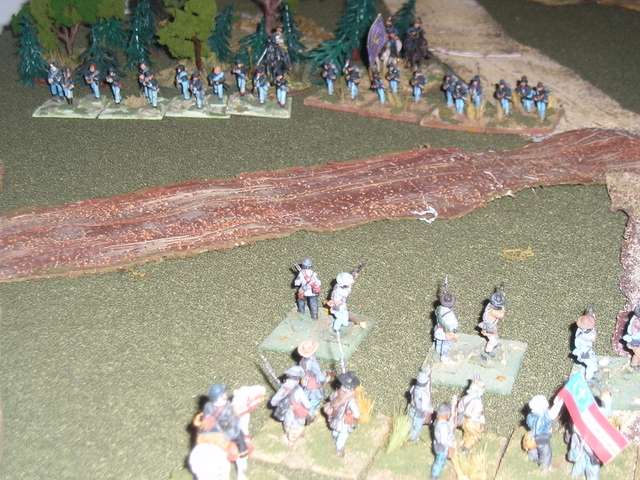 On the hill, the Iron Brigade has been thrown back with heavy losses, interpenetrating and disordering the 69th NY which was supporting its attack. Lone Star seizes the moment to throw the supporting 4th Texas down the hill and into the Irish ranks. Isn't that little outhouse in the background the cutest thing? Another thing we forgot was the rule whereby victorious units have to test to see if they will pursue routing units. There were several charges and routs in the game where pursuits might have made a difference either way. 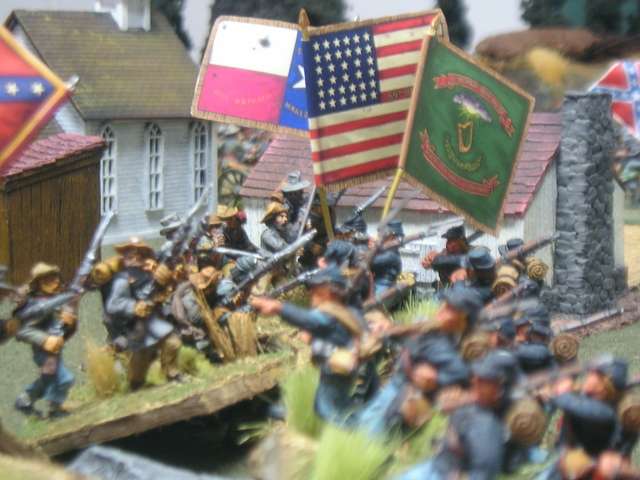 Meanwhile, disaster on my left flank. The Union brigade is lucky with its cards, and hits the leading two of McWhiskers' three regiments in their flank, routing them towards the Confederate centre. Those Yankees may be old Minifigs, but they're deadly in a flank attack.

John's luck runs out. The next card favours McWhiskers, who countercharges with his one intact regiment of Mississipians. They stop the Union brigade and throw it back towards its artillery. 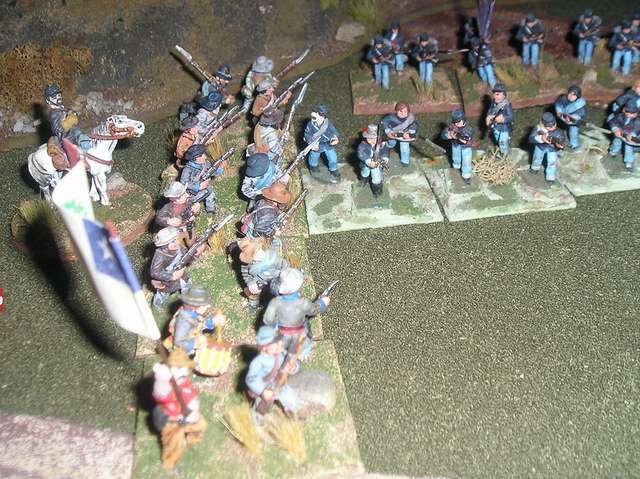 On the right flank, John's Yankees are busy skeddadling. His general tries to rally them with cries of "Think of your mothers, boys, what would they say?" but to no avail. Lone Star drives the routing bluebellies off the board with his Texans. In these rules, once a unit falls below half strength, it's pretty much toast. 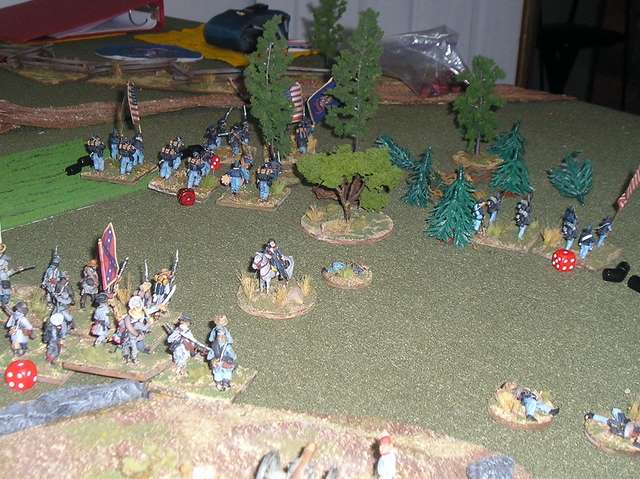 In the center, Genl. Cornpone was able to rally McWhiskers' routing regiments, while John had rallied his boys, and so a standoff developed on the left flank. However, the battered but victorious Texans were now threatening the Union batteries in the centre, forcing them to limber up and, says John, "strategically redeploy" rather than retreating. However, sadly for the Union, once limbered they were attractive targets for the Confederate gunners, and within minutes half the Union guns were knocked out. At this point, we called it a day. Jebediah Smith would withdraw and write a report to Abe Lincoln citing "unfortunate circumstances" as the reason for his delay in subduing the rebel forces and asking for immediate reinforcements. General Cornpone would send a report to Richmond simply saying "We whupped 'em good. Good fight. Too mussed up to chase 'em though".

Concluding thoughts - we both liked these rules. They were simple enough to be playable and they gave us a good game. We both felt some of the frustrations of the civil war battlefield. Even as I write this, new figures are being painted for the rematch. Will Jebediah Smith be able to turn the tables on Cornpone and drive him back to Richmond?
Posted by Mad Padre at 8:24 AM No comments: 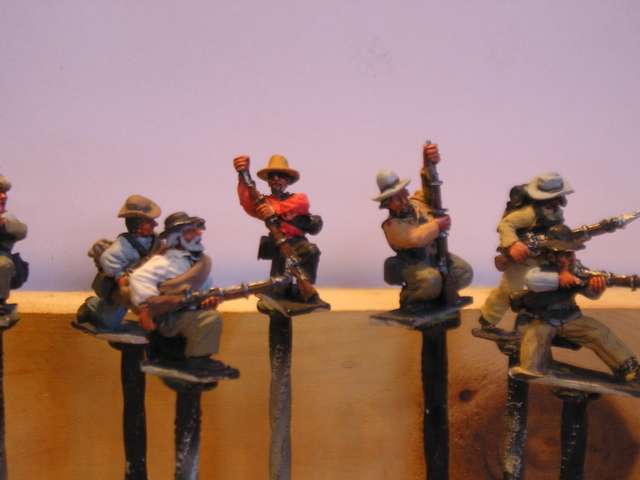 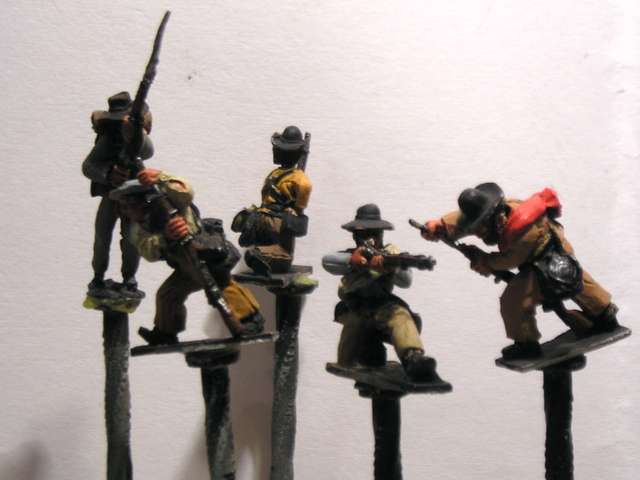 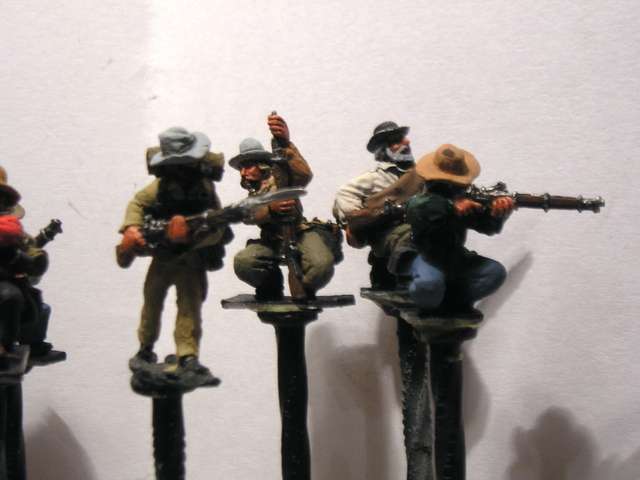 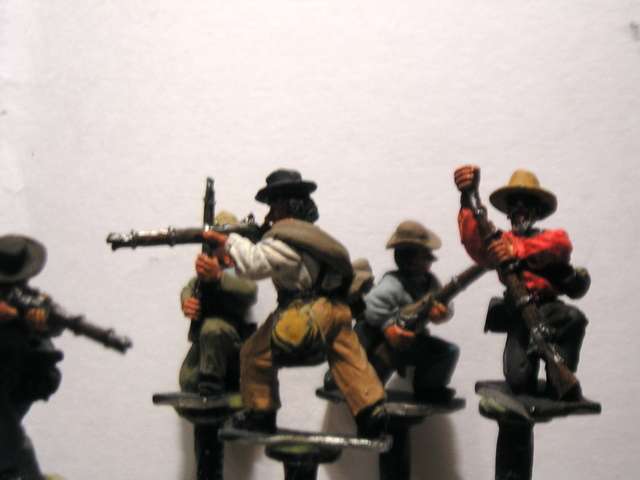 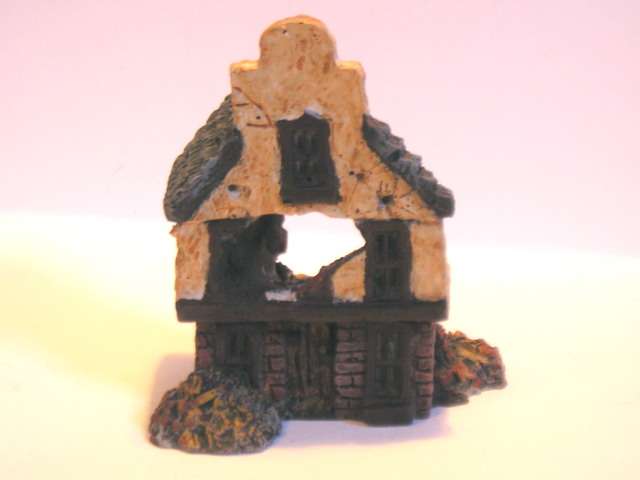 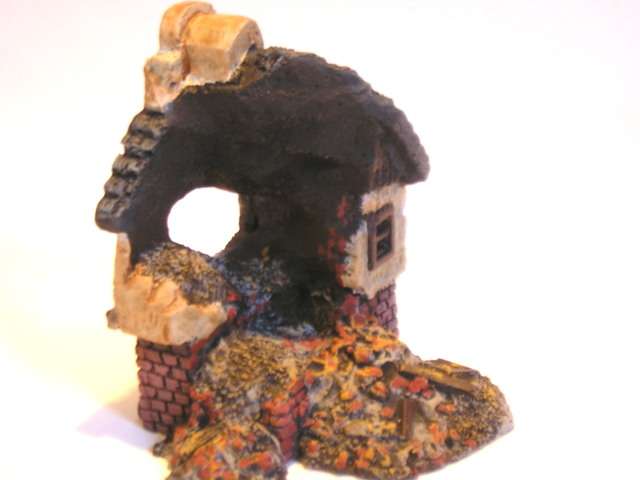 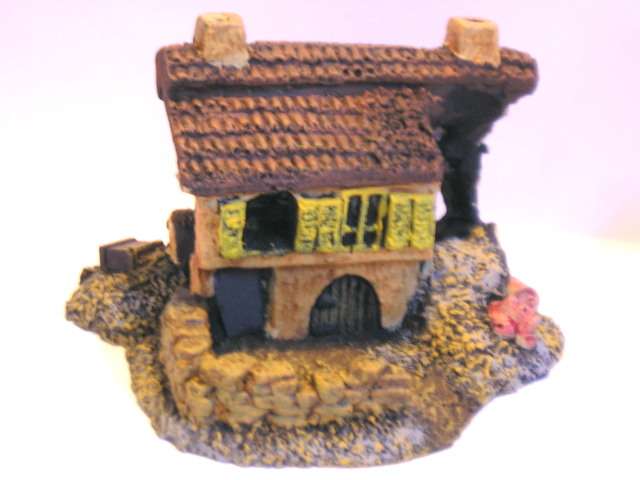 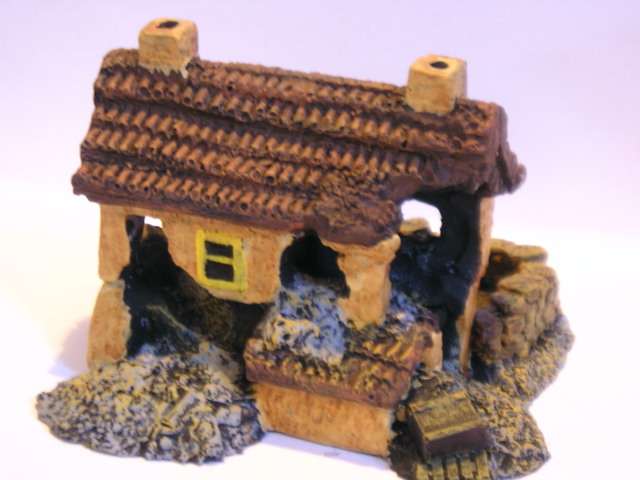 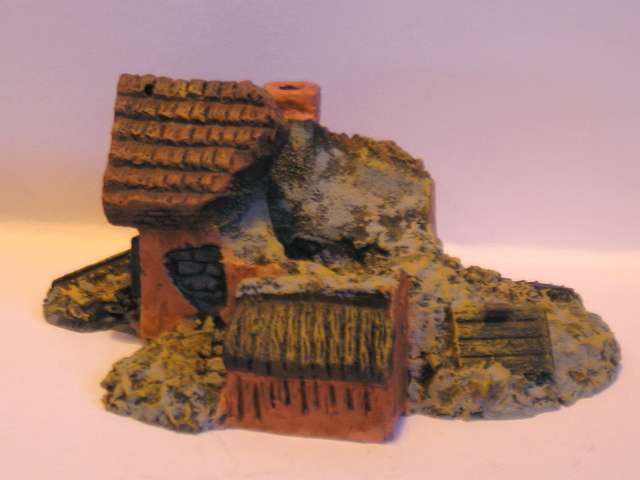