There was some epic wargaming this weekend when I travelled three hours west to Stratford, where James (Rabbitman) Manto and I staged the second of our Wargames Sleepovers, also known as OP THUNDERIN|G DICE (T-shirts to come).

James tells the story thrillingly here. I thought I would tell the story in several parts, as time permits.  While we gamed from Saturday morning through Sunday afternoon, I'll start the story on Saturday night, when we gathered in James' basement.   I've been making the pilgrimage to this basement for at least fifteen years, off and on, as the vagaries of time and distance permit.  It has hardly changed a whit, and the while the cast of characters has changed somewhat, the ones that remain are as dear as brothers. 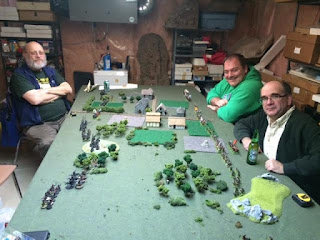 Mike, Patrick and James gather over a game of Lion Rampant.  My orcs bottom left.  Click, as Kinch says, to embiggen.

The game was Lion Rampant, which suited me just fine, as it has become a staple of my little gaming group in Barrie, and I like it more and more each outing.  It was a splendid chance to see James' stellar medievals collection.  Mike and I got the evil dudes.  Fulk the Bastard (with his pet vulture on his arm and his dreaded Black Company) had hired some orc mercenaries from the hills) while James took the eco-friendly and bad-guy unfriendly Forest Guys, suspiciously resembling a Welsh warband.  Patrick marched in from a nearby CityState with a medieval Italian host.   Historically accurate we were not. 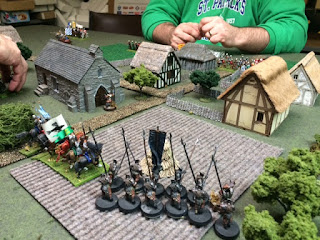 Fulk's bastards and some Ork spearmen (classed as Foot Sergeants) advance on the innocent village, intent on putting it to fire and, of course, the sword. 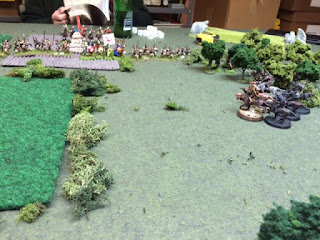 My leader, Gothmog, leads the cream of his Wolf Boy cavalry to ride down the pathetic and lightly armed human archers.  He doesn't realize what he's doing, poor monster. 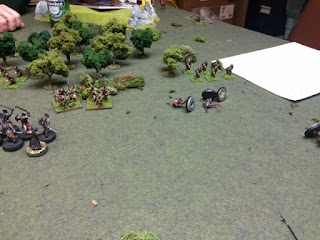 It all starts going wrong.  James has a wicked combination of six figure bidower archers, who generate (as far as we could tell, this was right) 12 dice of shooting death as long as they are above half strength, can skirmish (move and shoot with -1 off the firing dice) and are hard to hit.  Those fellows, backed up by the javelin armed light infantry in the woods, see off my Ork beserkers (Fierce Foot) who broke and ran under the arrow storm.  The berserkers can be seen dead top right, poor things.  My Orc heavy foot (Expert Foot Sergeants) advance, but the lights retreat into the woods, where they fight at an advantage.  This is how fighting Wood Elves must feel. 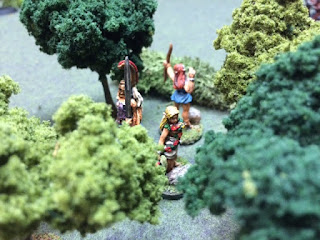 Speaking of Elves, a mysterious group of dangerous young ladies hung around in the woods - Galadriel's Grrrlz, maybe?  They took no part in the fighting, but they copped a lot of attitude, and no-one dared go near them. 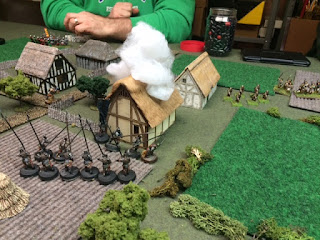 Orcs up to mischief.  One of James' splendid medieval houses goes up in smoke, having been put to fire and, of course, the sword.  This was the evil high water mark.   Note more detested bidower archers behind the house to the rear. 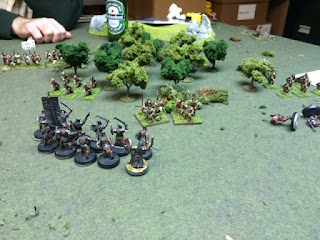 My Expert Orc Sergeants prove that experts are just over-priced help who don't know how to really do anything.  They are being shredded by javelins and, of course, by bidower archers.  They will shortly break and run. 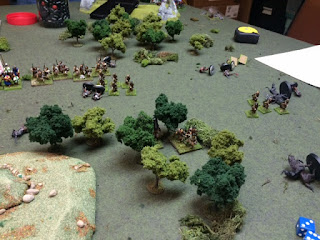 Having swept my right wing away, James puts his whole line into motion.   You can see the ruins of my (shockingly underpainted) WolfBoys on the right.   Gothmog led the remnants in a death ride which at least had the satisfaction of catching two units of the hated bidowers who failed their evasion rolls and got torn up, before javelins from the chaps in the woods at centre took Gothmog down.   He died, choking out words of hate - I think it was "Curse you, nasty tricksy shootsy army of James" or some such, but no one was really listening.
On the right wing, Mikey B had the advantage of sweeping his side of the table.  The Italians seemed to melt, one unit after another, under the Fury of the Bastard, but as the remnants of Mike's army savoured their victory, James was redeploying towards them.  Fulk recalled his pet vulture to his arm and rode off, vowing to raise another army, but ruing the money he had spent on Orks.
Final verdict - great game.   I need to develop some way of countering light shooty troops, seeing as my ork force is pretty heavy foot.   I do have some Isengard tracker types, the ones seen in the SPJ TT film, who might fit the bill.     If Lion Rampant is this much fun, I predict I will enjoy Dragon Rampant all the more when I finally give it a try.
Thank you James for a great weekend, even if I hate your nasty shooty bidowers.
Blessings to your die rolls!
MP﻿