The first part gives an update on the PBB Diplomacy game which now begins Turn 8 (F 1904).

The three retreats from the S1904 Orders Resolution are as follows:

Russia is down but not out, and could retake Moscow unless the Austro-Turkish alliance holds firm.

Germany is poised to take London and give England the coup de grace.

Italy is prevented from really exploiting the advantage of a weakened France, as it has to much of its forces guarding against the Turkish expansion.  What will the Sultan do? 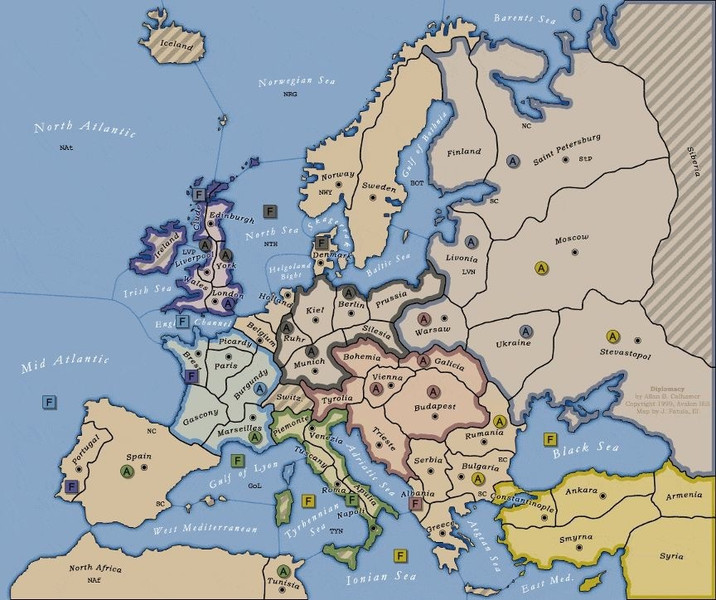 Second, and reviving an occasional Mad Padre Wargames practice, it’s Tuesday and that means a Tuesday boardgame.  Here’s the map of a micro-game designed by Paul Koenig from his D-Day series of operational level games on the first few days of D-Day, published by Victory Point Games.  Paul had two other games in this series, one on the British beaches and the other on the American landings.   I bought this copy and another PK game, on Operation Veritable, when VPG discontinued many of its small games.  This game, Juno: The Canadian Beach, is a one-map game, maybe 50 counters, pitting the Canadian 3rd Division against the German 716th Regiment, from June 6-8.  The Canadians have to get off their four beaches, capture the four villages near the coast and the town of Douvres, while exiting as many units as possible off the far edge of the map.

There’s not a lot of chrome here.  PK describes himself as a war games designer in the mould of Jim Dunnigan, with a Keep It Simple philosophy. I like PK as a designer, because he has a flair for neat and elegant game mechanics.  Juno has a simple combat mechanic, but with three different ways of attacking, it offers a lot of options for clever playing.  The chit-pull activation system is ideal for solitaire play, and it’s small size means that I can set it up in a quiet corner of my workplace and spend 20-30 minutes a day on my lunch break  pondering my strategy. 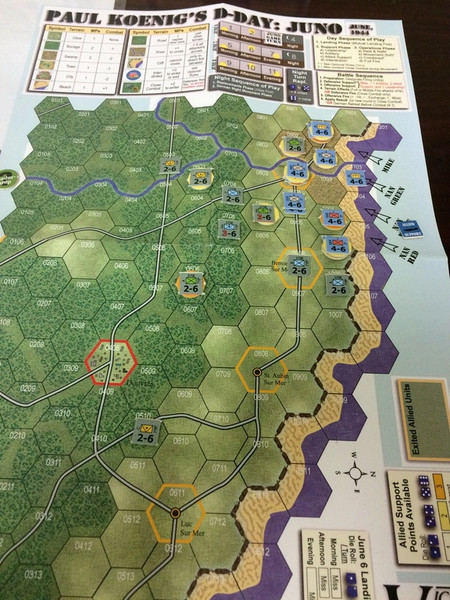 Situation at the end of 6 June.  The Canadians have gotten off their beaches and captured Courcelles, but have a ways to go as German defence firms up in the bocage.   Each unit is a battalion, and parent units are brigades (Canadian) and regiments (German).  The round counters under the unit counters indicate hit markers.  A unit can take one hit and is still fully effective, and two hits and be partially effective, but three hits removes a unit from the map. 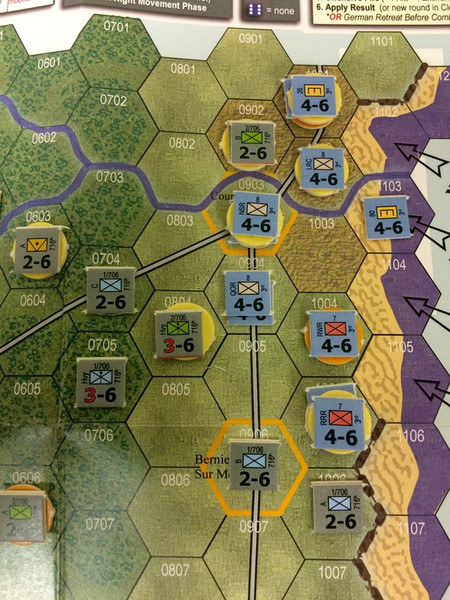 Most of the comments I’ve seen on BGG suggest that the Canadians have a tough haul to get a win in this game.  I’ll keep you posted.