An Epic Night of Longstreet

Four of us played a game of Longstreet at the wargames club last night.  It is quite a dark space, so I had to play with the exposure on these photos.

We used Len’s Cigar Box Battle Mat, which looked quite spiffy.  We put some styrofoam hills under the mat to create some elevations.    Stephen and I took the Union, while Len and Bruce took the Corn Fed Rats. We were both using the starting forces for a Longstreet Grand Campaign set in 1861 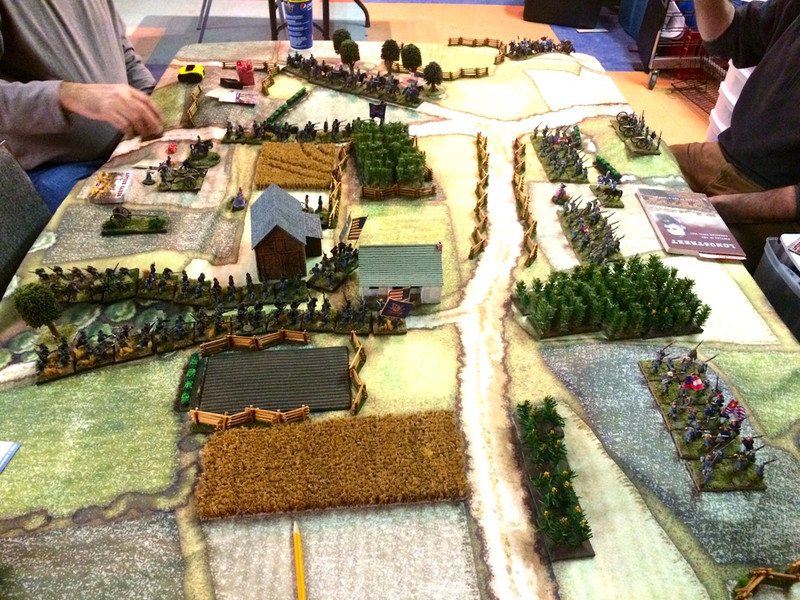 We are the attackers.  Our Union regiments go forward in column.   At the start of a Longstreet campaign, 10 stand units look quite impressive. 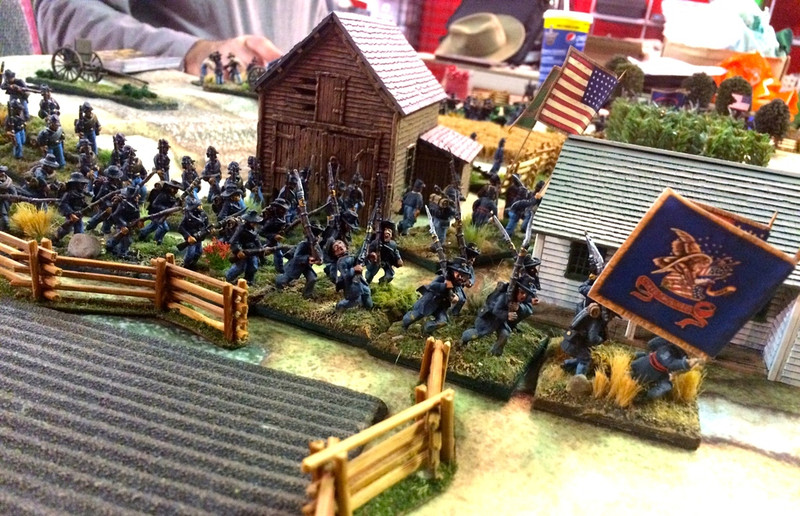 One of Len’s regiments awaits the onslaught.   All of Len’s units are Sash and Sabre figures, and looked quite fine. 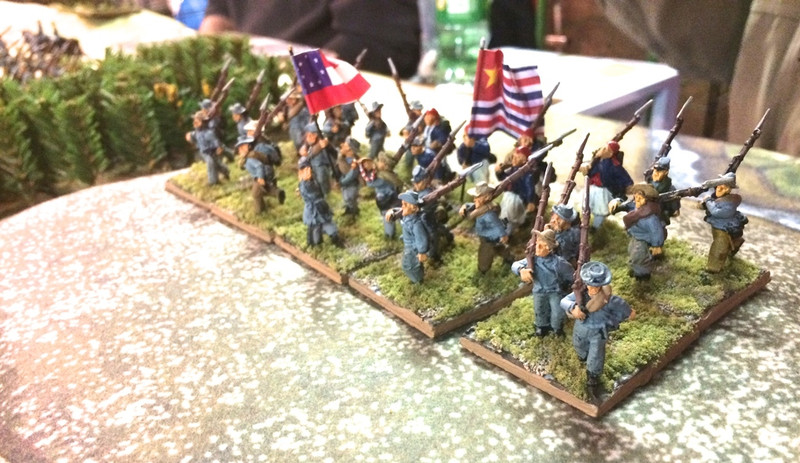 The view from my position.  Two young ladies watch the battle in the foreground, obligingly serving as Objective Markers.   Both sides had artillery mounted on hills, but we found that the rule about Shooting Over Friendlies (Longstreet p. 41), which requires that there be 6BW or more between the artillery and the friendlies, and at least another 6BW between the friendlies and the target, meant that it was very for the artillery to support the infantry.

The building in the foreground is one of Len’s - it looks very good.  Not sure what make it is. 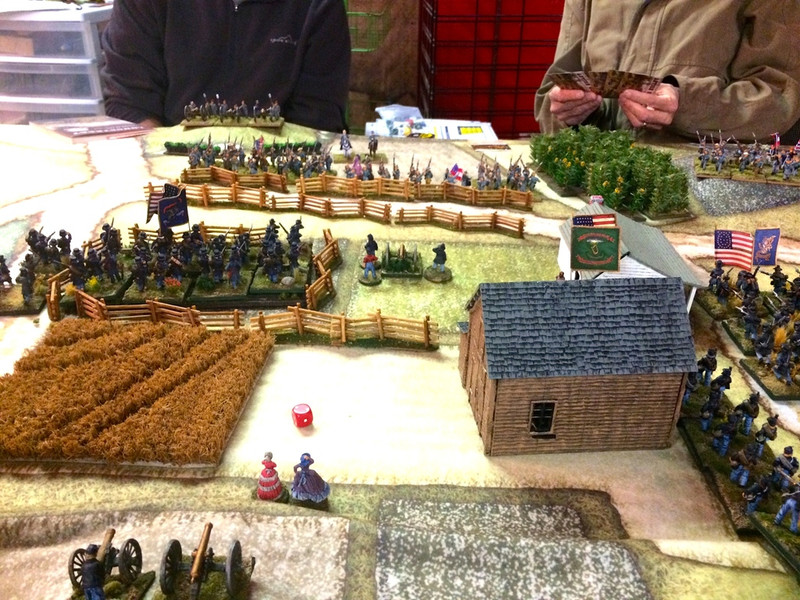 In the centre you can see that I pushed one of my artillery bases forward to engage the enemy with canister, but they were shot down before they could get off a round.  I didn’t regret the move, as it took some pressure off the Irish moving up in column to the right of the gun section.  in retrospect, though it’s not clear in the rule (Longstreet p. 20) on artillery formations, this may have been an illegal move, as I am not aure that one can break up artillery formations. 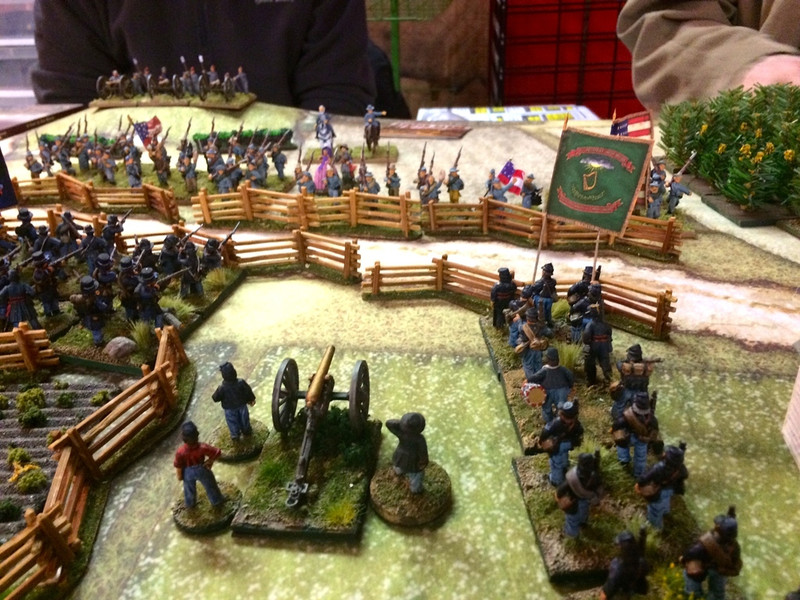 It all comes down to the big face-off.   I moved my two surviving guns to the right, where they could engage Len’s infantry on the hill on his left wing.  He saw my clever move, and brought his fellows down to shelter from the guns behind my black hats. 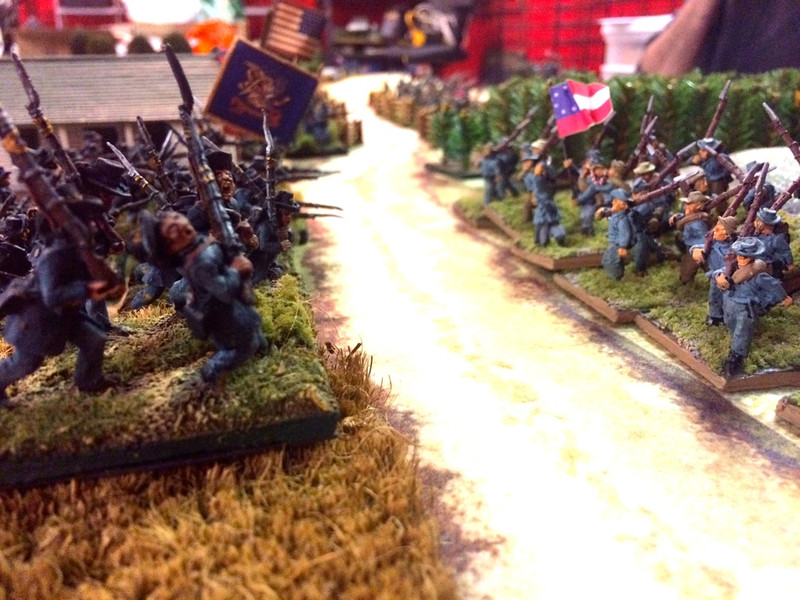 The big climax.   Stephen and I played the Charge Bayonets card (I think that’s what it was called) which allows units to shoot and then charge in the same turn. 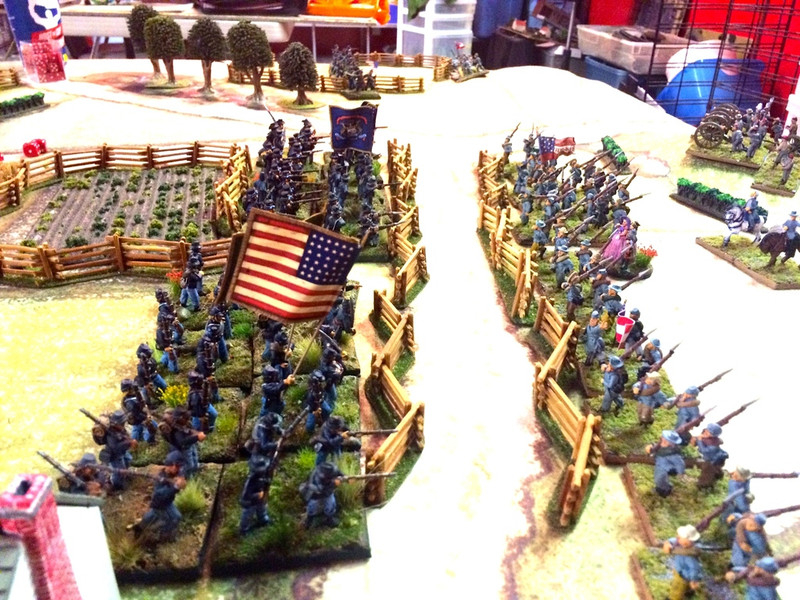 All four of our units charged, even the dismounted cavalry which don’t do as well in Combat as infantry do.  We split the honours, winning two of the battles on our right and losing two on the left.   We had an advantage, since all of the units started out as Eager, and Eager units do better on the attack than the defence.  However, with over thirty bases in total charging, that qualified us for three Epic Points, which means that we totally won the battle. 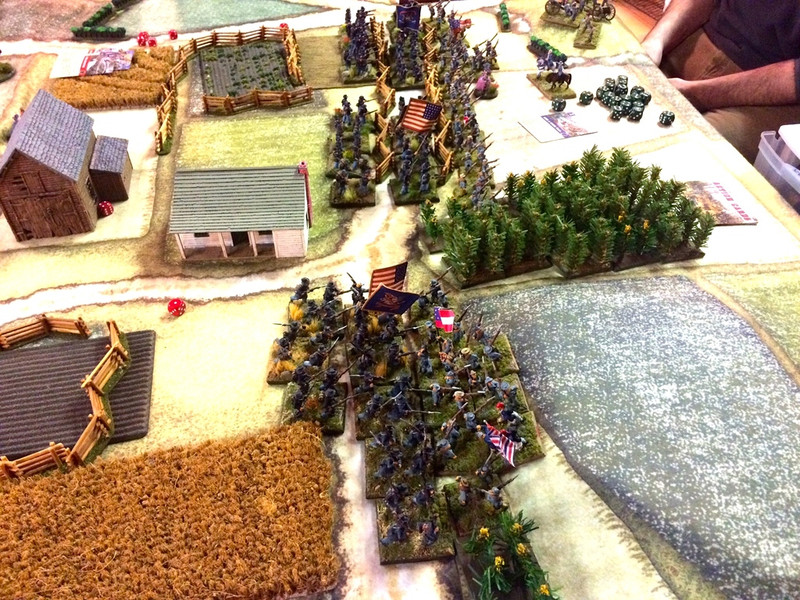 We had time to run the post-battle process.  All four of our units kept their élan as Eager, while two of the rebel infantry units fell from Eager to Seasoned as a result of casualties.  It must have been because they got roughly handled in our Epic charge.  We were doing well until Stephen rolled for Reduction.  Out of nine dice for one of our nine-stand infantry regiments, Stephen rolled five “1”s, which meant that we lost five stands from disease.   Wow, the brigade shouldn’t have stopped at that IHop on the way home, the food poisoning was brutal.  Should have listened to the Adjutant, he thought that buffet looked dodgy.

We did ok one our Campaign cards, gaining 2 artillery stands (Light Rifles), a company of Sharpshooters for one infantry regiment, and raising our hardest hit infantry unit to Veteran status.

Here’s the Union force after the post-battle phase:

Hopefully next week this force can seek it’s next battle, in 1862.