Imagining Wars To Come: Science Fiction, the Military, and the Wargamer 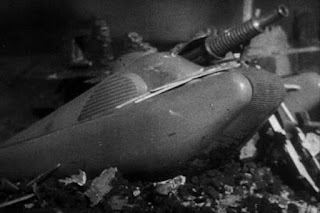 State of the art science fiction - future tank from Alexander Korda's Things to Come (1936)
As a wargamer, I'm not drawn much to SF (unless one counts a handful of W40K figures left over from my son's adolescence).   I tried WW3 based microarmour when I was an undergraduate, but it all seemed very deadly and rather tedious to me.   I do enjoy listening to other gamers imagine future conflicts - there was a very good thread on the Too Fat Lardies email list some months back with some very good commentary. I respect people like Robert Avery, whose undersung Quadrant 13 rules seem like an honest attempt to look far into the future using a simple gradient of tech levels.  However  I suspect there's a far future event horizon beyond which we simply can't imagine what war would be like, since we have no way of really envisioning future technologies, human or alien,
As a soldier, however, I take great comfort in knowing that my peers in the areas of strategy, doctrine, research and development spend a of time imagining what war in the near future will look like, even given our well-known predilection for imaging that the next war will look like the last war..   A book I reviewed recently on my other blog outines US military research in broad strokes, and includes an interesting piece on how the Pentagon is not adverse to picking the brains of science fiction writers.
There's an interesting collection of SF short stories available free here.  A US military think tank, the Atlantic Council Future Warfare Project, pulled together a number of smart writers and published their work online in a collection called War Stories From the Future. The collection includes a forward by General Martin Dempsey, who was te 18th Chairman of the US Joint Chiefs of Staff, which tells you that this was not seen as a flake project.  Some of the contributors are well known SF writers like David Brin, and others are young newcomers.
You won't find aliens or ray guns in this collection.  Instead, you'll see how much netcentric command and control systems, the computer and satellite systems by which today's miltaries are controlled, concern commanders as advantages and laibilities from kinetic attack in orbit or cyber attack on the ground.    Of my two favourites, one is "A Stopped Clock" (Madeline Ashby), which envisions a modern Asian city being shut down by cyber attack, and it's citizens trying to cope - it's a modern update of E.M. Forster's "The Machine Stops".  My other favourite is Linda Nagata's "Codename Delphi", in which a small unit of US troops in armoured exoskeletons operating in an asymetric environment are still vulnerable and dependent on a  remotely-located civilian battlespace manager giving them real time intelligence and telemetry updates.
Some of the stories are downright tedious and poorly written, but they all have something to say about what war will probably look like at some point in the 21st century.
So here's a question.  If you were to design a wargame or rules system for, say, 2060, how might it look different from war today?  Autonomous hunter-killer robots?  Advanced UAVs?  Enhanced human soldiers with neural networks and load-bearing exoskeletons?  Jammers to negate C3 systems?   How would you preserve the importance of the human element (leadership, training, morale, endurance) while modeling disparities in tech levels between combatants^
What would your near-future war look like or would you even want to go there?
Posted by Mad Padre at 11:19 AM