Terrain Tuesday: In Praise of Backdrops

Hello friends and welcome to another Terrain Tuesday feature, which today looks at how model railroad backdrops can enhance your gaming table.

If you’ve followed some of my recent AARs since I moved the painting table into a strategic corner of the basement, you will have noticed that the walls are painted a bright orangey-red of the hue beloved of interior decorators in the 1990s.   Sometimes that gave the photos from my games a bit of an SF vibe, as if they were being fought on some planet with a reddish atmosphere, like the sets in the original Star Trek.  This effect may not matter to those of a philosophical frame of mind, who think, “So what, they’re just toy soldiers, right, who really cares?” but I think you’ll agree that we do this hobby for its aesthetics; otherwise, why not just play paper and counter wargames? 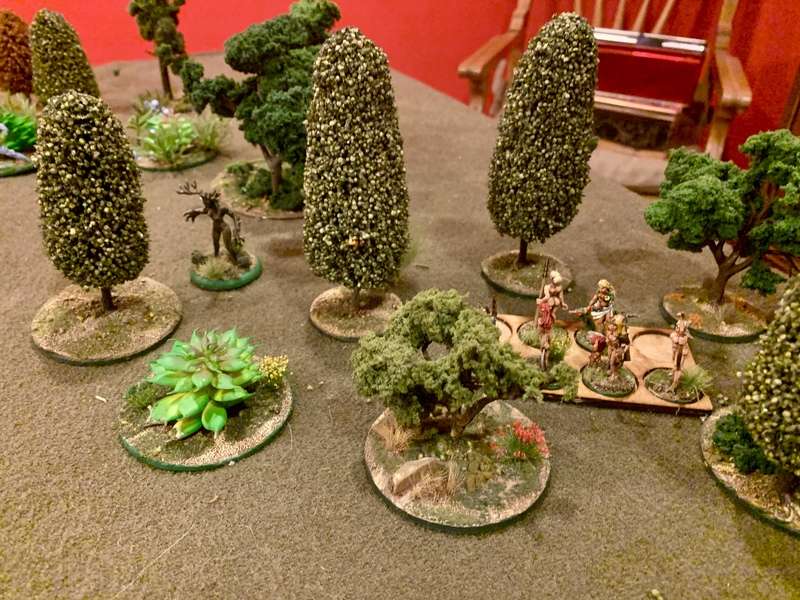 For my self-selected Christmas present last year, I decided to try some model railroad backdrops (back scenes as they seem to be known in the UK), and I ordered them from an English company called

New Modeller’s Shop, which gave quite good service.  I wasn’t exactly sure what I was looking for, but settled on to OO (1/76 scale) rural/village back scenes, here and here - which I felt would do for generic rural settings in the Eastern US (ACW), as well as western Europe (WW2, SYW).  The two codes I ordered each gave me two rolls printed on touch heavyweight paper - each backdrop set consists of two 5 foot long rolls, each 15” high - the rolls in each code are designed to be put together.  Here’s what I got. 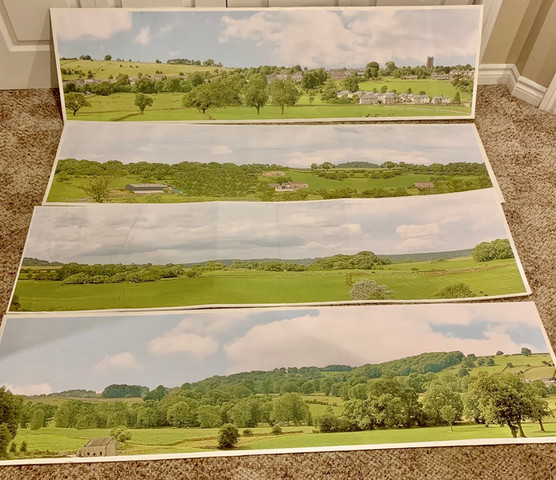 To mount them I bought four large sheets of white foamcore board and used duct tape to glue the two halves together to get the requisite ten feet length.    The first one I mounted (second from bottom above) taught me that glue is a terrible way to proceed, as despite my best efforts I got wrinkles and bubbles.  They aren’t visible from a distance, as the camera generally focuses on the figures, but they annoyed me, so I went to an artists’ supply sore and purchased a roll of white mounting tape, which proved surprisingly tough and strong.  Working very carefully, I applied the bottom of the tape to cover the white border printed on the backdrops, and had enough width of tape remaining to secure the backdrops to the foam core board.   The end result was much neater and didn’t buckle the foam core exceedingly. 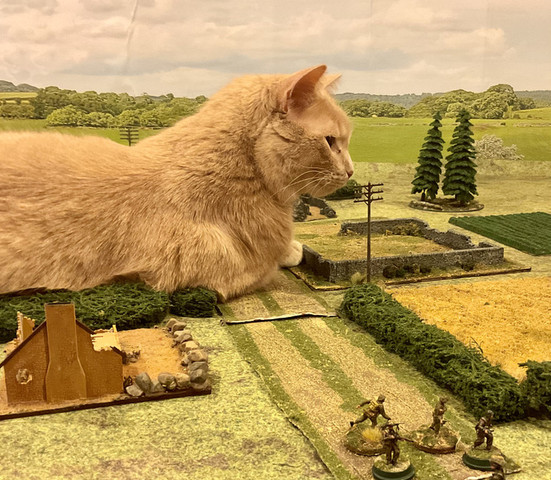 @MarshalLuigi highly approves, as you can see.  The camera focuses on the figures, so the backdrop is just a pleasant visual effect, but not distractingly so.   The OO scale seems to work with 20mm and 28mm figures.   I haven’t tried it yet with smaller scales.

The next problem was how to effectively keep the backdrops in place.   Butting the long table edge against a wall and propping the backdrop leaning slightly against the wall mostly worked, except that the white bottom edge of the backdrop was distracting in the photos, though I could cover it if I scrunched the table mat up against it like so: 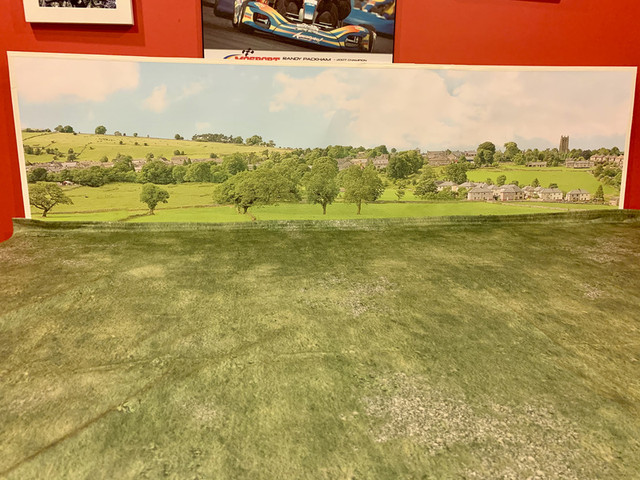 The other problem I faced was the weight of the backing board causing the backdrop to slip down behind the table, which happened with annoying frequency.   I wracked my brains, and ended up using small metal angle brackets drilled and screwed into the side of table, about one foot in from either long end, at a height sufficient to hide the white edging on the bottom of the backdrop.

Then another angle bracket, to be bolted and taped (because extra duct tape never hurts) to securely hold the backdrop in place.

I’ll finish securing the angle brackets tonight, and I think that will solve the problem neatly.  Of course, if I want to use the backdrops, one long table edge has to be against the wall, making it somewhat problematic for reach if I want to use a second table, but I think that’s a small price to pay for the visual enhancement in the edited and cropped photos, and really, isn’t that what’s terrain is for in our hobby?

Cheers and thanks for looking,