Books On The Go: The Fighting Padre

I made the mistake of browsing the excellent Pen and Sword website recently and in due course three books arrived in the post (trans-Atlantic mail has improved remarkably since the start of Covid) including this collection of letters from a British infantry chaplain of the Great War, Pat Leonard. 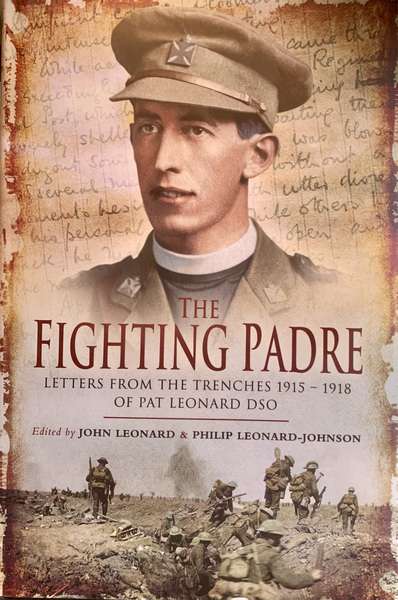 Leonard was a young Anglican clergyman whose youth and vigorous physique (he was an accomplished boxer, hence his nickname “The Fighting Padre”) allowed him to thrive in the trenches when older clergymen quickly broke down under the physical demands of frontline service.    He was attached to a British Army infantry brigade, and later in the war transferred to the Royal Flying Corps, supporting a number of different squadrons and aerodromes and earning a respectable amount of flying time in the observer’s seat.

Chaplain memoirs and letters are a fairly niche subject.   For the clerical reader, it’s always interesting to see how frontline padres tried to support the men under their care, often travelling long distances between units to bury the dead, offer the sacraments, counsel and encourage.  For the general reader, they offer a fascinating look at daily life in a war zone, in and behind the front lines, and glimpses of the culture of the men they served.  Chaplains were almost all civilians before the war and thus lacked much military knowledge, but they were observant, intelligent and articulate, and so they offer a great “fish out of water” look at the war around them.

I wanted to read this especially because Leonard was friends with a chaplain hero of mine, Philip (Tubby) Clayton, who ran “TocH” or Talbot House, a soldier’s rest centre in Poperinghe, a town within the Ypres Salient.  Tubby’s picture is on the left of this blog’s header - his own memoir, “Tales of Talbot House”, is a brilliant book in is own right.

I’ve just started and haven’t met Tubby or any aircraft, but have found Leonard an engaging and friendly guide to life in the trenches.