More Thoughts On Blucher: The Battle of Karlseck - Kaltenbach concludes

I had forgotten that back in February I was blogging, somewhat fitfully and tediously, about an experiment to set up a solo Napoleonics battle using the battle generator, Scharnhorst, included in Sam Mustafa’s Blucher rules.   You can see the prelude to the battle here.

In brief, a larger Austrian force of four divisions of infantry and three of cavalry caught a smaller French army of three infantry divisions (as well as a detachment of the Imperial Guard) and one cavalry division.  Archduke Luigi considers the opening attack.  He is famous for his aggressiveness and for his short attention span.  A division of Grenzers is visible on the right, on the way to attach the town of Karseck.   My mistake with this game was making the table too big - I had to lengthen the time scale during the battle once I realized that nobody would be in contact until noon.  In future games of Blucher I will allow all units to move 12 Base Widths a turn until they come within 8 BWs of an enemy unit (the max range of artillery). 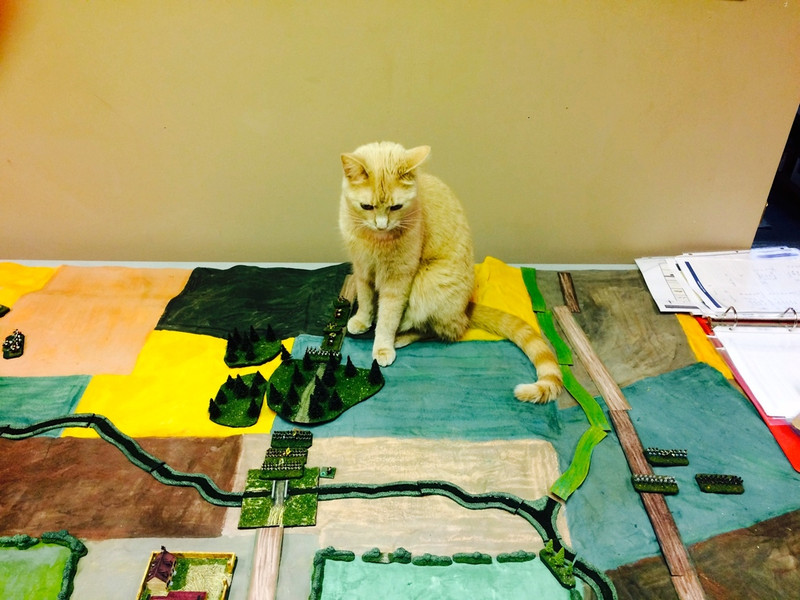 Much of the battle happened on the French left.   The French cavalry was committed to delay the Austrian advance until the French infantry could stabilize the line.  They mostly succeeded, but three of the four French cavalry brigades were reduced to 1 Strength Point each and were withdrawn from the battle.  It quickly became obvious to me that an advantage in numbers in Blucher can be at least partially negated by poor initiative dice, leaving some formations sitting idle.  The attacker has some difficult choices to make about which units to activate and where to keep the focus of the attack going. 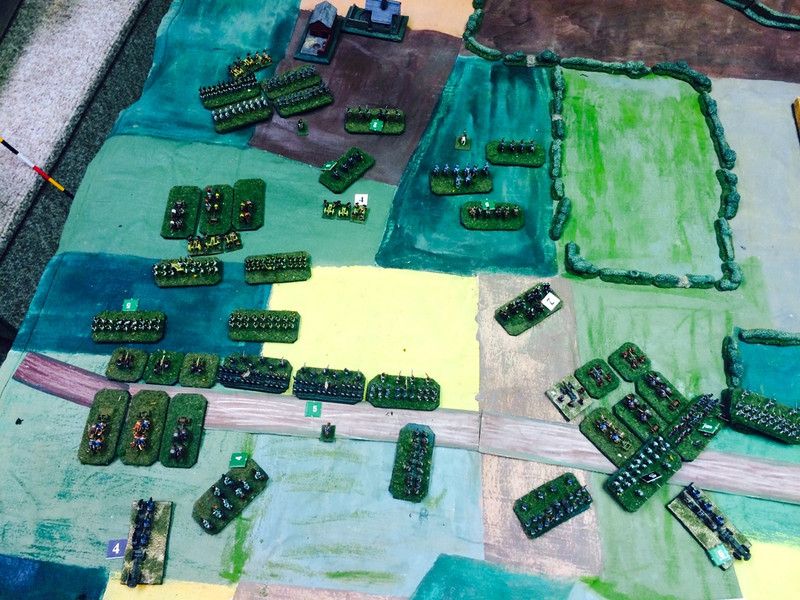 The Austrians overran and captured the French horse artillery.  Note the miss-mash of numbered chits I am using to track unit strength.   Originally I planned to use the unit rosters that are on the Sam Mustafa Honour website for download, but I found the problem was that I hadn’t identified which units were which.   I will need to make up unit IDs of some sort to go on the units in some way if I want to use the rosters, and keep the number chits off the table. 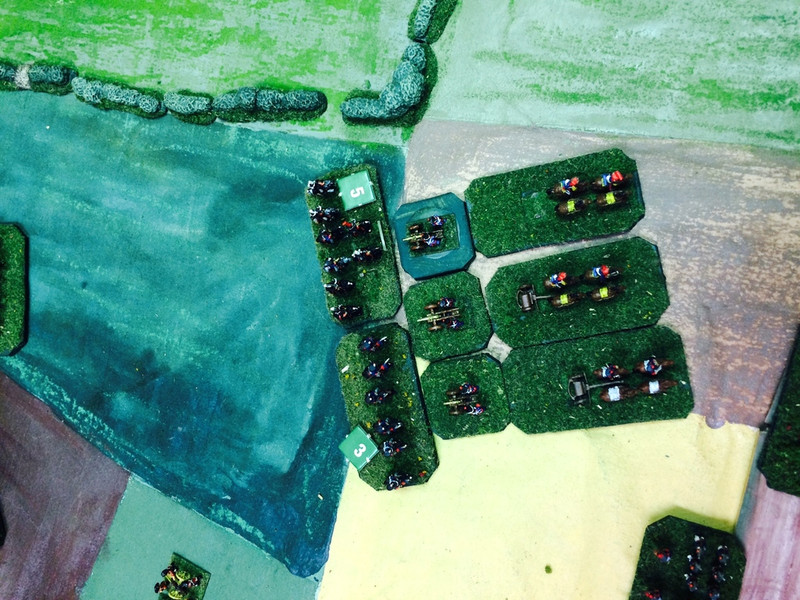 But the French infantry were able to hold them at bay while their division’s artillery came into action. 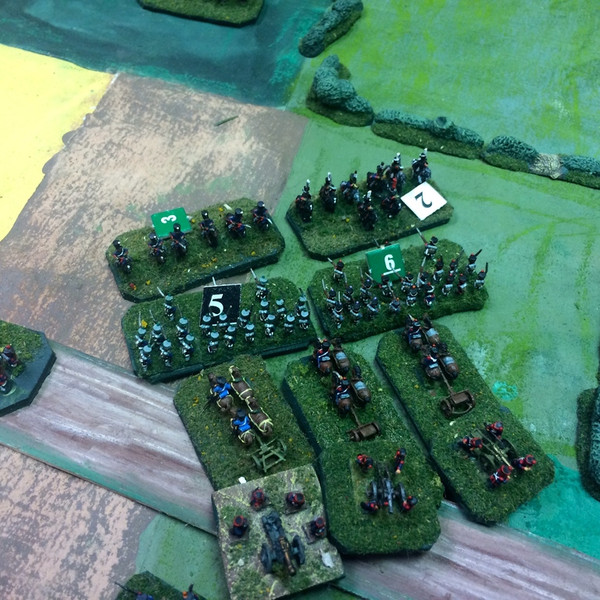 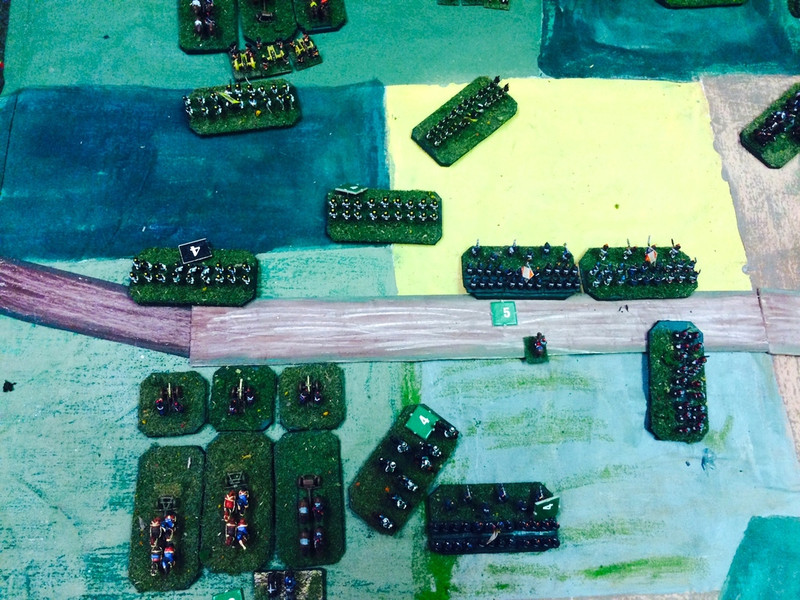 But artillery and a charge of the last effective French cavalry brigade on the fight saves the flank.  Those four dice you see show a Combat score of 4 - 0 over the Austrian infantry brigade, which started the combat at 4 SPs and was thus destroyed. 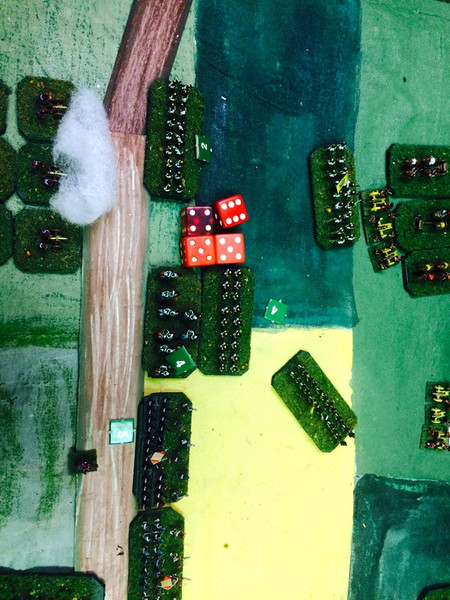 A view of the final battle.   An Austrian division has pushed through half a division of French (the other half were committed to hold Karlseck against the Grenzers) but the Imperial Guard are drawn up on the hill in the French centre.  One of the Advanced Rules I liked very much was that by the time the battle gets to the late Afternoon turns, you can reduce the number of dice thrown to generate initiative points from 3 per turn to 2 per turn.  That reduction simulates the onset of fatigue and the difficulties of keeping things moving as the light starts to fail.  By this point, it was proving impossible to bring the full weight of the Austrian army to bear and it became clear that the French would live to fight another day. 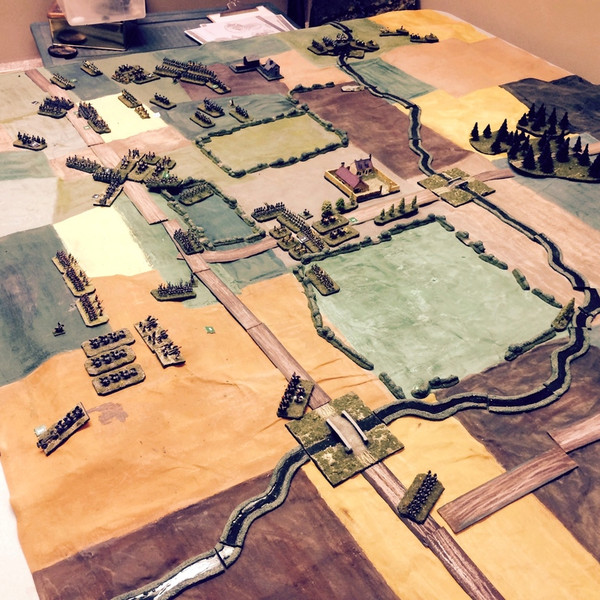 Last turn of the game, the Austrian Grenzers push the depleted French defenders out of Karlseck.   Grenzers can count 1 of the “5”s that they roll as a “6” in fire combat against troops in built up areas, and used their firepower to whittle down the French garrison until they had a decent chance of a successful Combat. 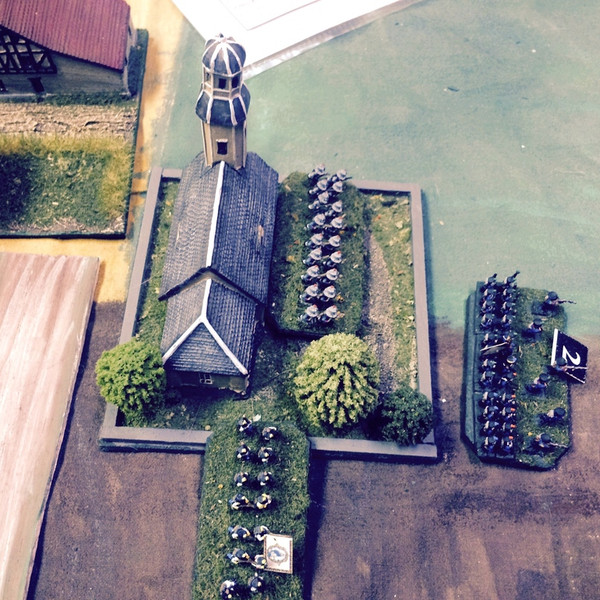 It took me a while but I was able to use Shcarnhorst to set up a battle and play it to a conclusion.   Had this been a battle in a campaign or a linked series of battles, Napoleon would have been forced to retreat.  Even though the casualties were relatively low and equal on both sides, it would be very problematic to resume the fight the next day, though there was a division of heavy French cavalry that never made it to the battlefield.  The smart thing to do would be to abandon the attempt to seize Karlseck, link up with the heavy cavalry, and try to sideslip the Austrian force and keep moving north, which was the objective all along.

One of the things about Scharnhorst that I really enjoyed was the random entry of reinforcements by both sides.   The Austrians got substantial reinforcements of two divisions) in late morning, but they never got into the fight, even if was very worrisome, when I put my French hat on, to see those numbers stacking up on the French left.

I continue to enjoy Blucher for its playability, though I find in a large battle that there is a certain generic feel to it, a trading of Strength Points in a contest of attrition.  It has an abstract feel to it, with very little of the Grand Tactical layers of rules that some other rules have or strive for.