Here are five stalwart Canucks from another stalwart syrup-sucker, Bob Murch, two-fisted sculptor and CEO of Pulp Figures.  These figures are part of his Yukon Peril series and are intended for my Rockies Ablaze project.  I write that with more than a twinge of regret as much of northern Alberta, a province I have called home and much love, is itself ablaze.

Here are some of the rough yet good-hearted who will aid the Mounties as they comb the high Rockies for werewolves and Nazi aeronauts: from left to right,  Laing Jock Laing, Jake Montana, and Leo O’Rourke,  Laing Jock has ‘nae much to say, and is a gruff fellow, but a good enough neighbour.  Jake has wandered from Fairbanks Alaska to Frobisher Bay, and can smell the weather changing.  Leo came home from Passchendaele touched by the war, but still wears his CEF greatcoat.  He drinks to forget, but the liquor doesn’t help. 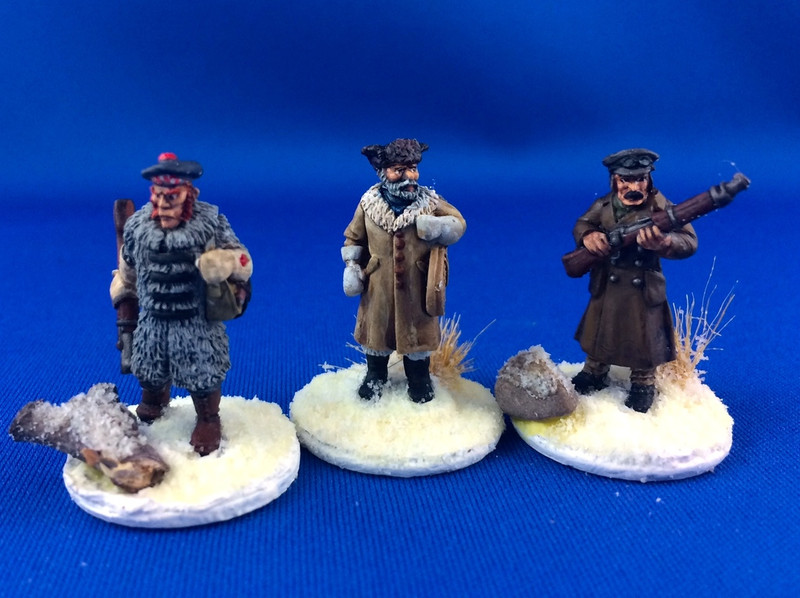 Since Bob has sculpted these fellows in cold weather gear, I decided that I would use a winter theme for this project.   I used Woodland Scenics snow for the basing, and tried to add some details to emphasize the idea of fallen snow.  I found that the final spray of dullcote tended to stain the snow basing a faint yellow, so added some more snow afterwards. 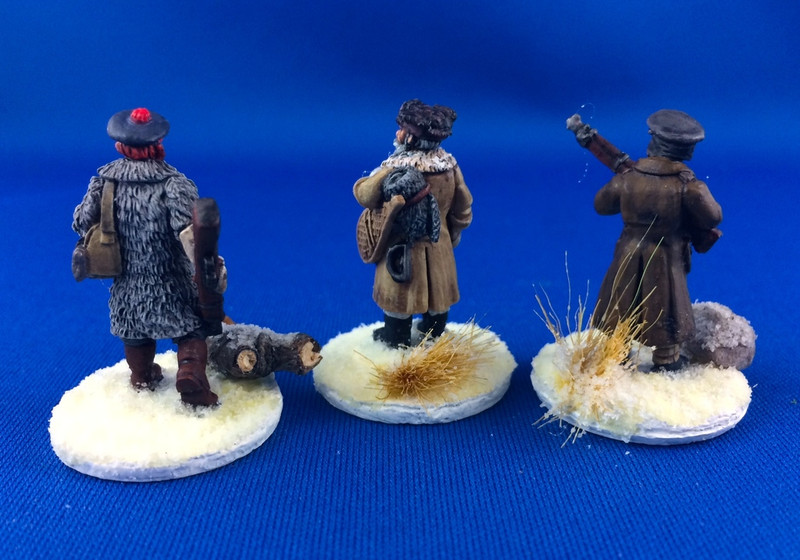 Rufus Quant and old Frenchy Lamoureux.  Neither fellow gets out of the bush much.  They don’t take kindly to claim jumpers, tax men, or Nazis.  Rufus reminds me somewhat of Captain Haddock from the Tintin comics, which may be why I painted his coat blue.  Hmm, I see a little white paint on his trousers that needs fixing. 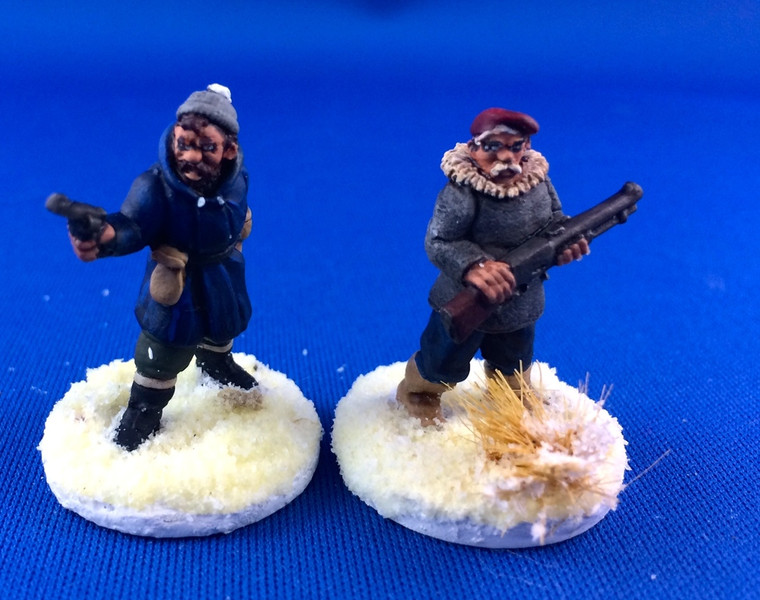 I also made a start on some scenery for the project.  This was a proof of concept: two stands of Busch HO scale conifers found in a model railroad store, brushed heavily with watered down white carpenter’s glue and then dusted liberally with Woodland Scenics snow.  I am rather pleased with the result.  I will need a lot more of these to supplement the slightly cheesy looking Christmas village trees I found in a craft store. 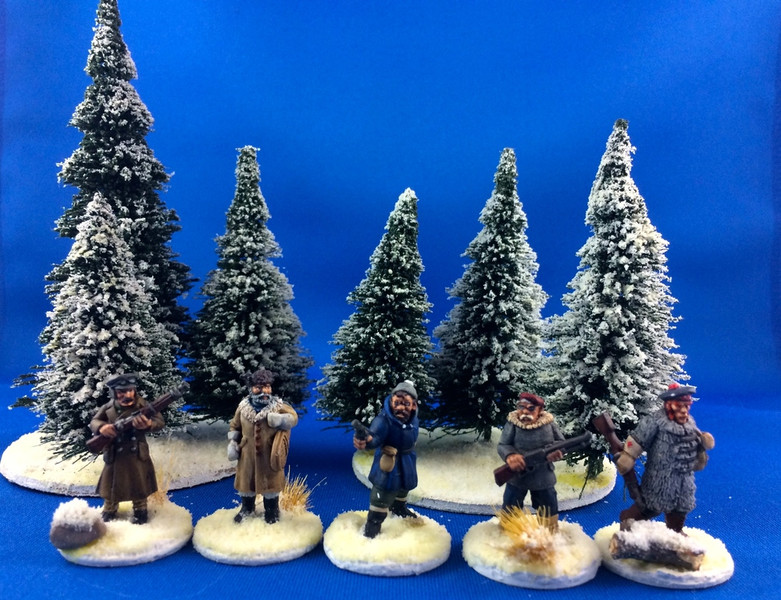 Here’s a sneak preview of where the project is going next.   I was giddy with glee to come home from Hot Lead in March having met Bob Murch himself and having purchased one his Great Canadian Moose castings (as opposed to the other moose castings, which you can find in any forest in Newfoundland).   Peter Douglas, one of my blog readers, knows about me and mooses.  It’s a huge casting, and I think is absolutely necessary for this project.  I am thinking that the noble great moose will turn out to be a mortal foe of the werewolf and perhaps a great friend of the good guys, if they can manage not to shoot and eat him.

Besides paint, he needs a name.  I am thinking Justin, after Canada’s new young Prime Minister.  Any other ideas? 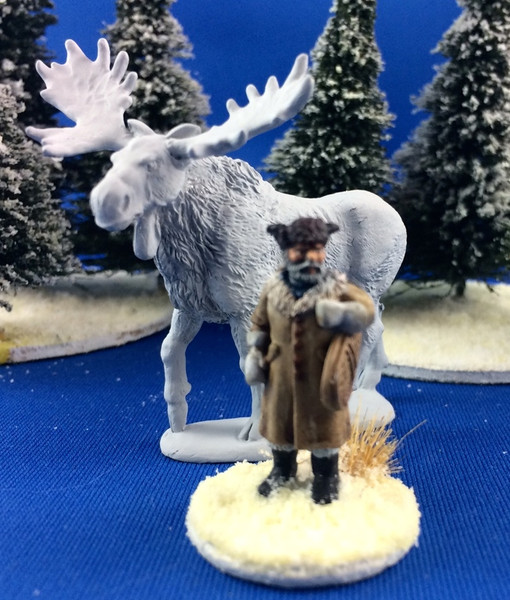 Currently on the painting desk: Mounties.   These are also from Pulp Figures.    It’s my first time painting red coats, so I am going slowly to try and get it right. 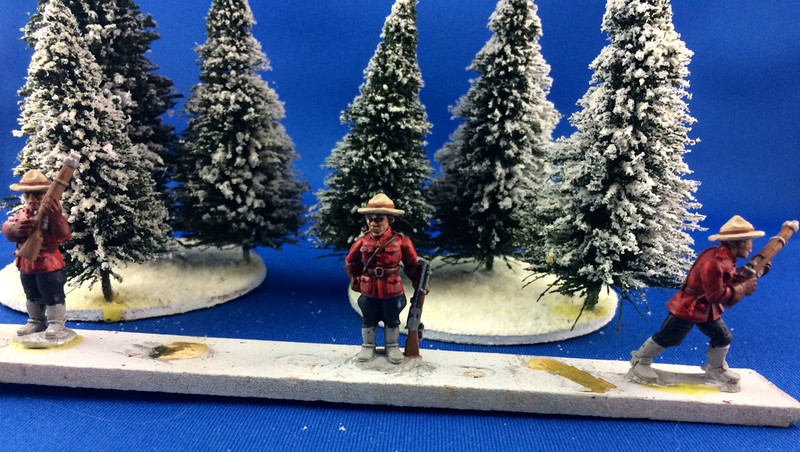 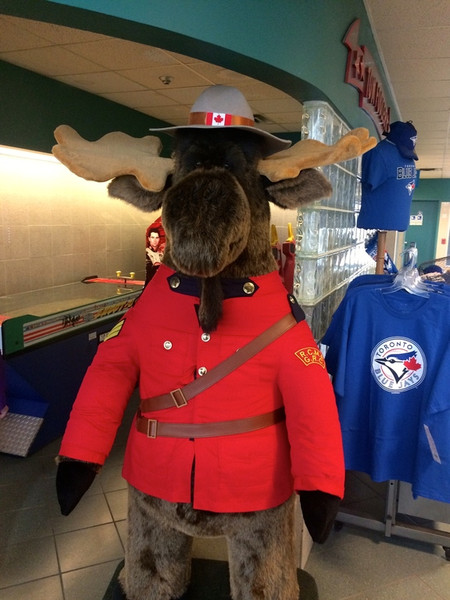