For those who were having trouble viewing the images, I deleted them all from Imageshack and uploaded them directly to Blogger, to see if that makes a difference.  MP

For the last few nights I ran through my first play test of Too Fat Lardies’ Dux Britanniarum with my Middle Earth figures.   I think my good friend Thomas the Penguin has beaten me to the punch in trying this, and I used his first cut at a set of rules to help my thinking.

I was constrained by the number of painted figures that I wouldn’t be ashamed to put on the table, but that was alright, as I wanted to start small.  Here’s the Rohan force.  One group of four horse, rated as warriors.  I used the rules for British Shock Cavalry, but I allowed the one figure with the bow to shoot as well, even after moving, to reflect what Tolkien says in The Two Towers about how the Rohirrim fought when mounted (see more on that below).  More on that anon.  I also gave them a group of four missile troops, a group of six rated as Warriors with a Level 2 Noble, and a group of six rated as Elite to reflect the Royal Guard with a Level 3 Lord. 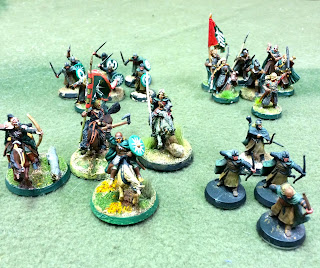 And the bad guys.  Boooo!!!!   One group of six Uruk Hai rated as Warriors with a Level 2 Noble.  Two groups of ordinary orcs rated as Levy with a Level 1 Noble.  Not shown is a group of four missile troops, using the figures kindly sent to me by the Duke of Tragardland.  Finally, a group of four Warg Riders.  These were the ones who gave me some pause for thought.  I decided I would treat them as Warriors, and used the rules from the Dux B supplement Dux: The Raiders to allow them to fight as either Skirmishers with the ability to evade combat, or as Formed cavalry if they wished to fight that way.   To reflect the fighting ability of the Wargs, I gave them an extra dice in Combat. 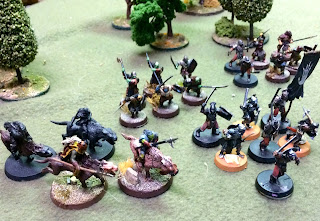 First turn.  The Uruk Hai rush forward to engage the Royal Guard, while the warg riders go straight for the archers.  I was unprepared for how fast cavalry are in these rules, getting 3 dice movement pus 2” per dice.  I also had not bothered to read the rule about missile troops and harassing troops just scattering if contacted by the enemy.  The Rohan archers got one shot off, then the wargs were on them and they were gone.  Bad start for Rohan. 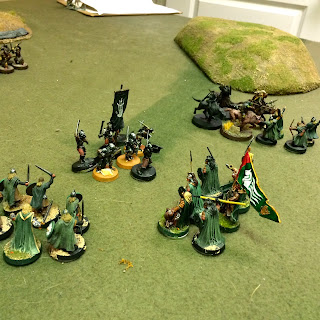 Guard send the Uruk Hai packing with two kills and three points of shock.  And yes, I blush to admit, those are unpainted warg riders in the foreground.  The shame of it all. 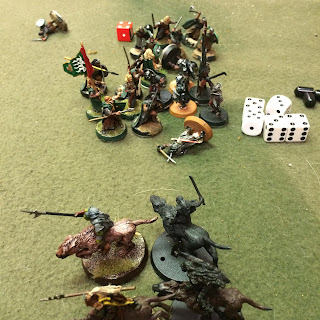 I asked Luigi the cat what he thought of it so far.  He said that he would sleep on it and get back to me. 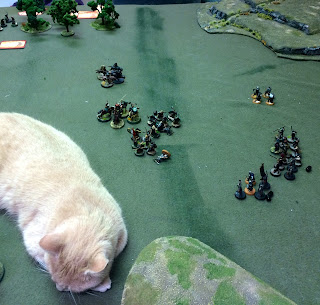 But now things were turning against the Riders (and, I suppose, the Walkers) of Rohan.  Thanks to a Portentous Signs card played against the Rohan cavalry they picked up two points of shock and a third from the pesky orc archers.  Cavalry with Shock against them are considered to be Blown, and so can’t charge.  I moved the Riders up beside the Guard, hoping that the Lord’s card would come up first and he could rally the Shock away before the Warg Riders closed. 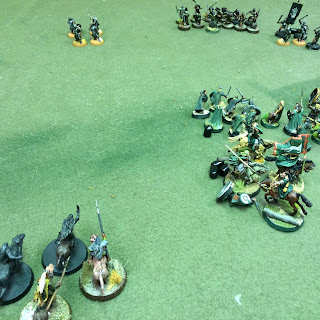 No such luck.  In the next turn the cards broke Bad.  The Warg riders charged and killed two of the four Riders.  Then the two groups of Levy Orcs, in one formation, charged the Rohan Warriors, who foolishly were on their own and not in Formation with the Guard.  Formations are key to DuxB, I am finding.  The dice broke hard against Rohan, 2 hits vs 6. Rolling the kills, the Warriors lost three figures and were thrown back. 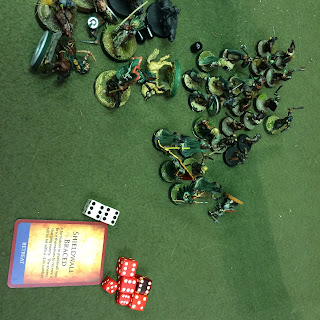 The only high point left for the Rohirrim were when the Guard pushed forward and killed all but one Uruk, leaving him and his Noble to rout away.  I have to admit, the GW figures are pricey, but they show to good effect in this shot. 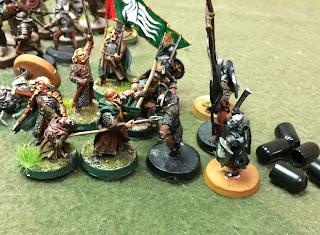 But disaster as the orc arrows take out one of two remaining Riders.  The survivor has more than twice as much Shock as surviving figures, and routs.  The Royal Guard are surrounded, down to five men and their Lord, and will doubtless sell their lives dearly, so that songs are sung of them in the Halls of Eorlas, etc etc.  Ms Foy looks on in disapproval at this sad day for Men. 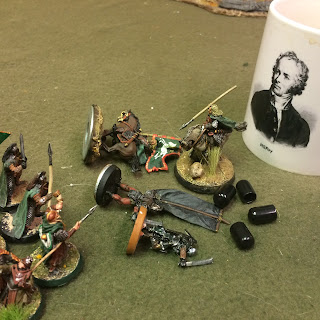 First, I liked DuxB very much.  I’ve played enough TFL rules that the basic mechanics feel the same, and I like the emphasis on leaders and morale, which feels very Lardy.  I didn’t pay enough attention to the Fate cards, and wasn’t quite sure how and when they can be played, how hands are replenished, and what their effects are.  I need to study that more.   I also didn’t use any of the DuxB rules for the Pre Battle Phase, and there are elements there, like speeches, consulting the gods, combat between champions, which could be very Tolkien-esque.

I learned to be wary of one's missile troops if you want to keep them, though really, in these rules, they don’t amount to much.  The real heart of the game is in the clash of melee troops.
I am not sure how much I want to handicap the Orcs.  Thomas suggests treating them as Saxons but dropping them one level of quality from the rules, so that most of the orc foot would be Levy, the better or big orcs (Uruk Hai) would be Warrior, and only a very few, say Saruman’s Berserkers, would be Elites.   I also think that Orc leaders should be few and far between, and generally no more than a Level One or Two, with perhaps a few better ones like Ugluk from the Two Towers.  The trick, though is to make the orcs a formidable opponent rather than just axe fodder, so they should at least get more figures than the Men, enough to make a fight of it, Quality vs Quantity.  I would only allow better Orcs, like those of the White Hand, to use the ShieldWall rule.

The Warg riders are interesting.  Tolkien says very little about them in Two Towers that I can see.  Most of what I know about them comes from the SirPJ movies, which I am trying to keep out of my head.  I don’t want to make them Shock cavalry, but the nasty bitey wolves should have an effect in combat, I think, so they should get at least an extra dice in melee.  I like the idea of treating them as Raider cavalry, put perhaps they should have one of the precious few Nobles assigned to them if they are going to act as Raiders and go from Formed to Skirmish at will, but without a Leader they can only be Skirmishers?  Otherwise the Warg Riders are dangerous opponents, I think.

It’s hard not to want to treat the Rohirrim cavalry as Supermen. However, as I saw, the Blown rule in Dux B can work against cavalry very quickly, so one wants to keep them in reserve for the coup de grace, as shock cavalry should be used.   As for the horse archer capability, Tolkien writes in TT:  “A few of the riders appeared to be bowmen, skilled at shooting from a running horse.  Riding swiftly into range they shot arrows at the Orcs that straggled behind, and several of them fell; then the riders wheeled away out of range of the answering bows of their enemies, who shot wildly, not daring to halt.  This happened many times …”  (Chap 3, “The Uruk-Hai”).  To be faithful to Tolkien, the Rohirrim, at least some models,  should be able to fight as horse archers, which otherwise do not exist in DuxB.  In a large force one could perhaps designate one group of four Riders as horse archers, or in a smaller force, as I did, I mixed a group, treating three figures as Shock cavalry and the fourth, a model with a bow, as an archer.  I suppose one could even allow the archer to shoot just as the group charged or was charged, provided the group did not have any Shock on it?

Thoughts and suggestions?
Blessings to your dice rolls!
MP+
Posted by Mad Padre at 7:18 PM