Last Saturday my friend James visited for a wargaming slumber party.  His AAR can be found here and includes photos of his stunning modern Afghanistan terrain.  The only thing missing from that game is the forthcoming Too Fat Lardies Fighting Season rules, but we shall wait patiently for that.
We had time for two games, and I persuaded him to try another test of adapting TFL’s Dux Britanniarum to Middle Earth.  This was my second try, the first attempt is described here.  This time we tried a slightly larger force. The Rohirrim got two four-man groups of archers, a group of six Royal Guards (Elite foot), a group of six foot (Warrior), a group of four Shock Cavalry (Warriors) and a group of four Horse Archers (Skirmish cav).  James deployed them on a ridge, with the Shock Cavalry in reserve.  Rohan got one Level Three and two Level Two nobles - one was assigned to the Shock Cavalry.  We allowed the Horse Archers to activate either on the Missile Troops card or the Cavalry card.  We used British cards for the Rohirrim. 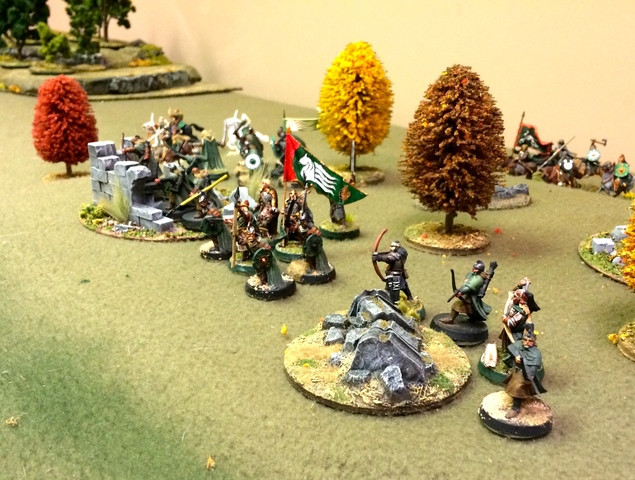 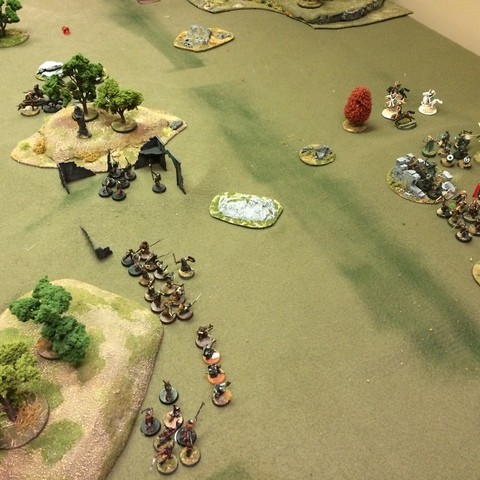 While the horse archers and warg riders threatened each other, the Uruks advance on the left, wanting to drive the archers out of those spiffy ruins that James brought with him as a Christmas present. 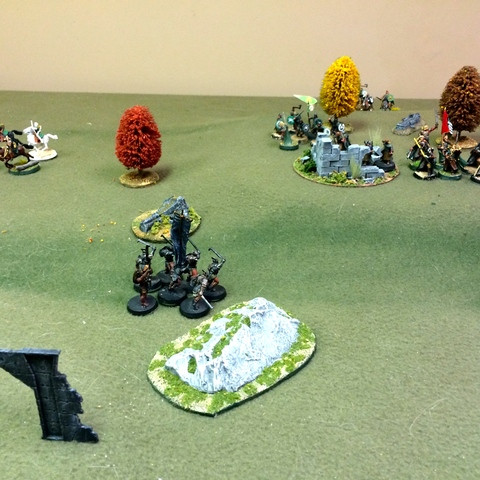 Rohan warriors come forward to protect the archers.  Since the Uruks had charged uphill, we wondered if the Rohirrim should get an extra dice, at least in the first round of combat.  The DuxB rules are silent on that subject so we decided not to, but we wondered. 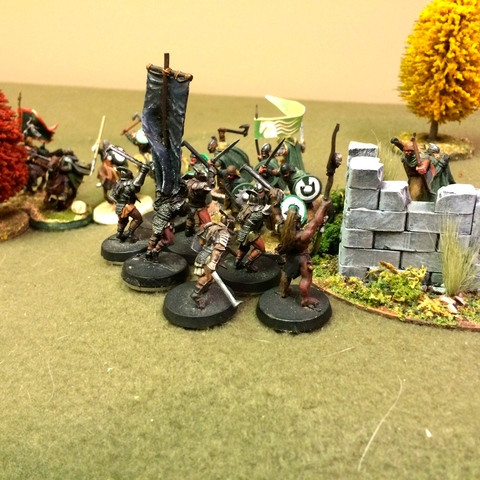 I unleash the Fell Catbeast of Mordor, but he isn’t interested in doing all that much to help me. 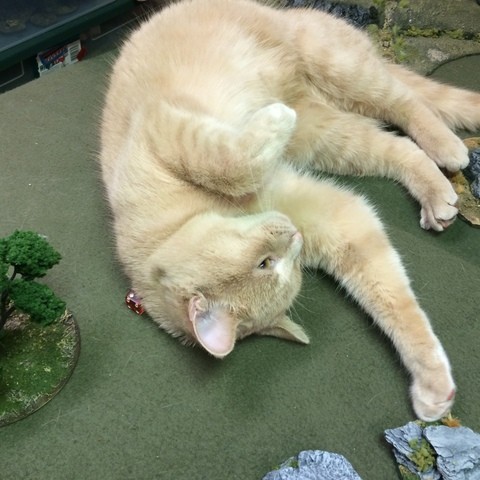 We were using a GW Aragorn model to represent the Noble leading the shock cavalry.  His card came up after the Rohan foot and the Uruks had fought two rounds of combat.  It was, if I may so, shocking to see the effect of Shock Cavalry, which double the amount of dice they throw in combat as well the number of shock they inflict.  We also allowed the Rohan foot to fight again, since the rules suggest that when another group joins a combat, or when the rival Noble’s card is activated, all sides in an ongoing combat fight again.  I think we got that right. 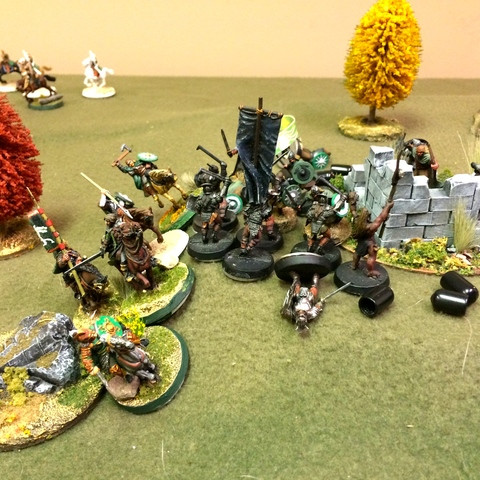 At any rate, it was enough to kill the Uruk Noble and rout the survivors.  At that point though the card for the Warg riders came up.  Treating them as Raider Cavalry from the Dux Raiders supplement, we allowed them to go from Skirmish to Formed if they wish, which they did. The Wargs slammed into the Riders, and in two bloody rounds, three Rohirrim and three Wargs went down.  Aragorn survived and won, but the Rohan cavalry were done for the game. 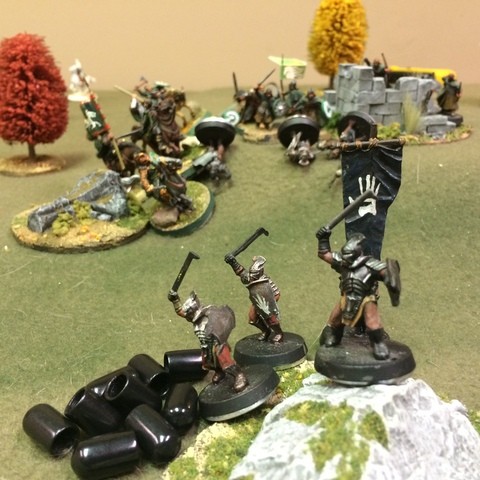 However, it wasn’t fun and games in the centre.  Sockrat the Orc summons his rabble forward, but they are two groups in a Formation.  They surge forward. A vicious melee develops at the top of the hill.  Here the benefit of Formations really showed to us, because while the Rohan hearth guard had Quality working on their side, the Orcs had Quantity, so a base 12 dice vs a base 6 dice, with modifiers thrown in.  The orcs were thrown back with heavy loss, but took down one doughty Rohirrim and caused some shock.  However, and here I have to confess something really, really, really awful …. 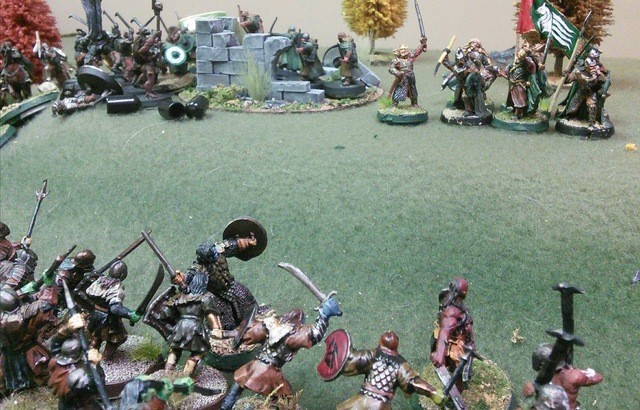 … ummm, err, I used a unit of Berserkers.  Yes, I know, a unit of berserkers.   Now, in my defence, I used six GW models, who are based on the big naked fellows on the ends of ladders who get thrown up to the ramparts of Helm’s Deep in the SPJ Two Towers film, and who generally lay about with sword and death.  Very cool, I know.  But hitting poor James with six of them, other than being immensely satisfying, was probably a little unfair. 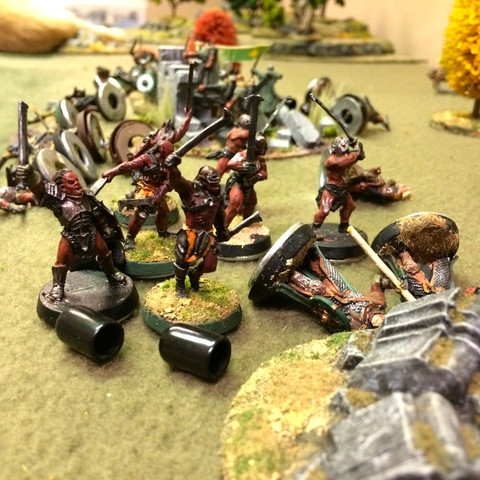 I know that Lindybeige, who is only slightly less mad than Professor Elemental, would likely have said this was silly, though he is talking about Vikings and not about Isengard berserkers.

Unfair or not, the hearth guard broke, or rather, hustled their Noble off to safety.   That was enough to decide the game, we felt, though both sides were left pretty tattered. 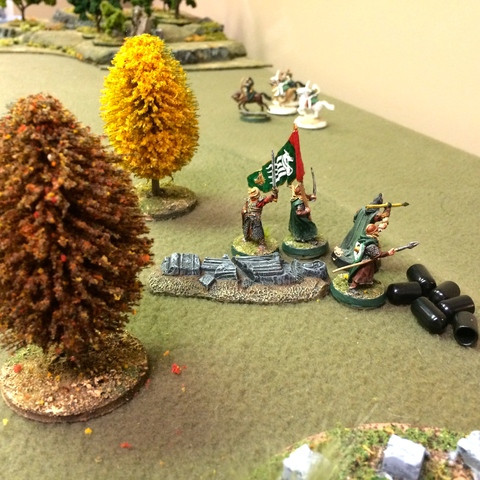 So what did we learn?

First, the idea of using Rohirrim horse archers as separate units of skirmish infantry, as Ross McF suggested, seemed to work.  The only question we had was whether the regular penalties for archers firing and moving (lose 1d6 from movement, -1 on the to hit die roll) should apply.  I am inclined to say not, though I am still worried about making the Rohan horse archers into supermen.

Second, no more units of berserkers, though I think that an orc force should have at least one berserker as a Champion.  I haven’t been using champions at all, actually.  I think they would be a way of modelling some of the main figures from Tolkien, such as Legolas and Gimli at Helm’s Deep.  It would allow them to have some effect on the game, without making they too dominant as they are in the original GW LOTR rules.

Third, shield walls.  If the Rohirrim want to win, they need to use shield walls.  Which means I need to paint up at least six more of the plastic Rohan foot I have lying around.

I am sure there were more things we learned, such as a greater familiarity with the DuxB rules.   In general I am quite happy with them, but I think my next few visits to Middle Earth will be using Dan Mersey’s Lion Rampant rules to see how they compare.

Blessings to your die rolls, and beware the Fell Catbeasts of Mordor!
MP+
Posted by Mad Padre at 9:07 AM