Two Cheers for One Hour Wargames

I’ve had my second chance to take Neil Thomas' One Hour Wargames out for a test drive.  The executive summary of my thoughts as processed through my many biases:  great scenarios, but only ok games.

I tried an early scenario (#4, I think) where both Red and Blue start off the board, with a river in the middle.  Red and Blue both get six units, determined randomly.  The objective at the end of fifteen turns is for one side to control both the bridge and the ford.  Here’s my appropriately simple table.   Besides the river with the two crossing points, the only terrain items Neil calls for are a hill SW and a forest NE.  I added some fields because the poor old table looked so naked. 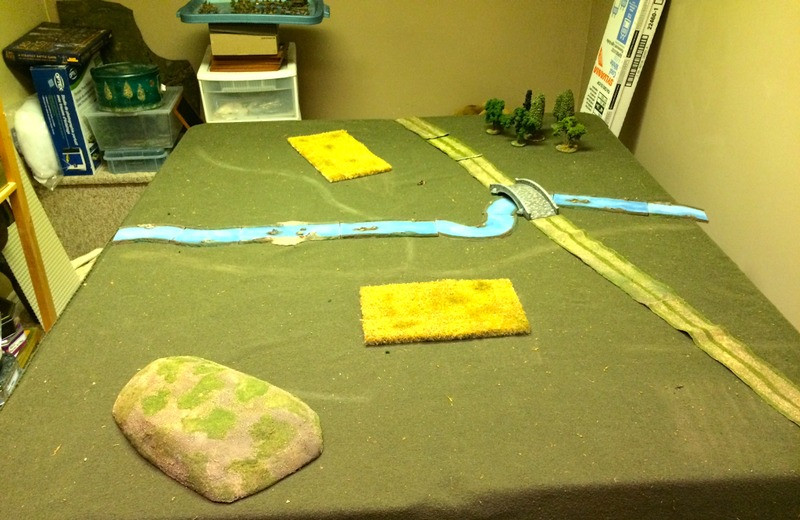 For this battle I decided that my 20mm WW2 kit would make a nice change from the medieval battle I tried last time with OHW.  Red (of course) are the Soviets.  For them I rolled 1 tank 1 AT gun, and four infantry.   Blue (German) get 1 tank, 1 mortary,  and four infantry.   Because I was using a bigger table than the 3’ by 3’ that OHW calls for, I doubled the movement and range distances.    Here the Russian tank has reached the ford, while the AT gun approaches the bridge.   Three Russian infantry groups in the open, and one in the woods top right.  Germans brace to meet them. 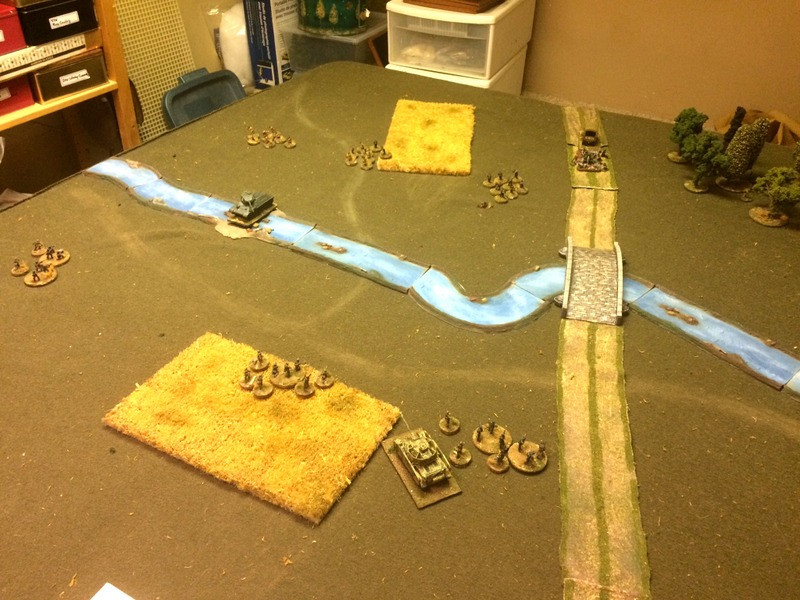 Russian AT gun moves up to the stream, while infantry rush across the bridge.   Notice my brave Naval Infantry leading the way.  That gun looks suspiciously like it belongs in the Fall of Berlin, not out by this lovely stream. 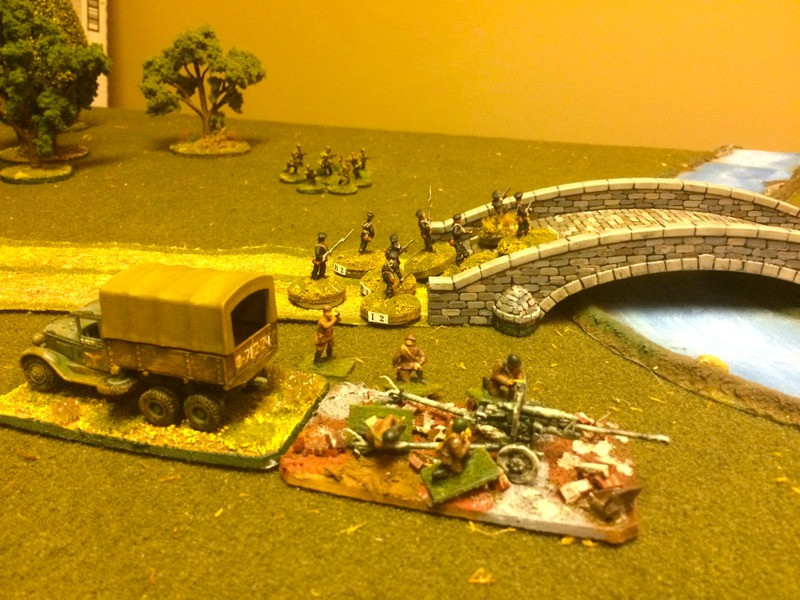 Russians taking fire.  15 hits on a unit eliminates it.  Combat in OHW is brutally simple.  Each shooting unit rolls a dice and adds or subtracts modifiers, thus generating the number of hits.  For example, infantry vs tank roll 1d6 -2.  Tank vs tank roll 1d6 +2.  The Soviet infantry are also getting hammered by the German mortars, 1d6+2 vs infantry, while the T34 is getting roughed up by the PZIV and the supporting infantry. 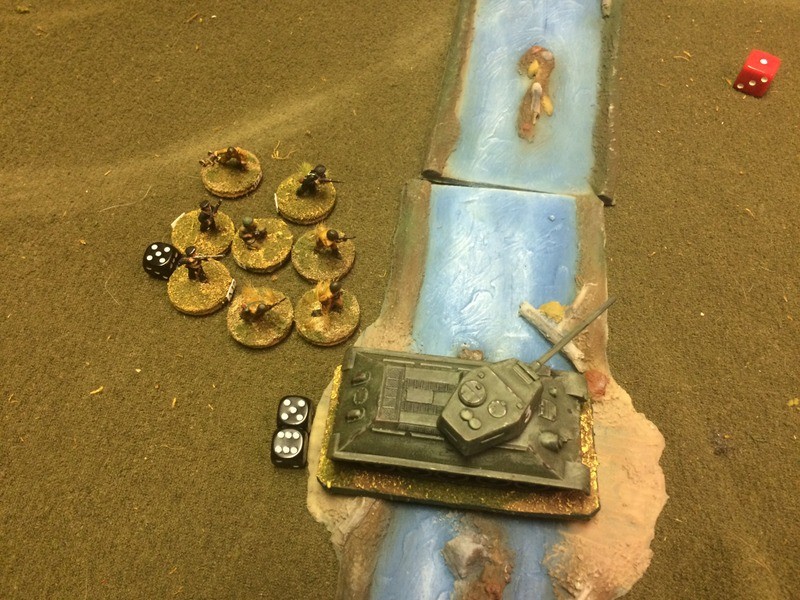 But the Jerry tank is KOed by the T34 and AT gun, while Soviets rush over the bridge.  That tank, by the way, is a Britannia resin model I splashed out on a few years back, and very nice it is. 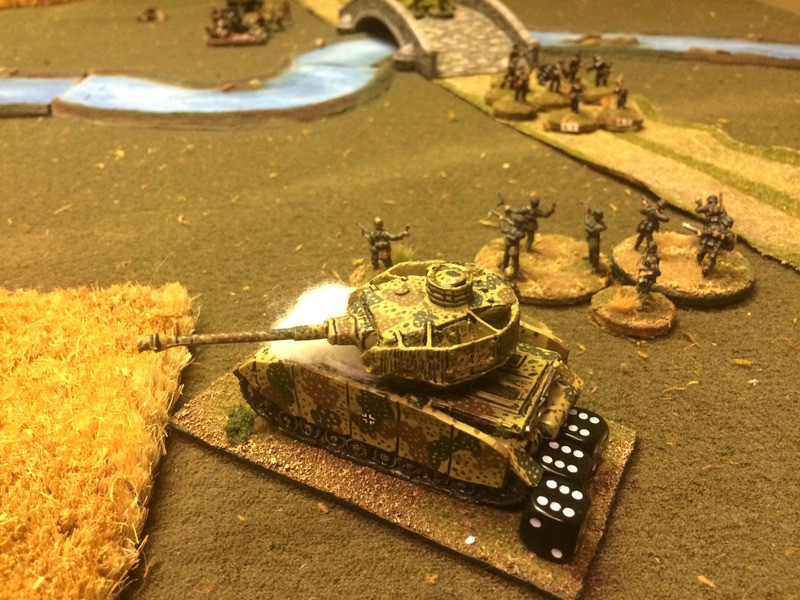 Casualties mount as the infantry duke it out.   The naval infantry did their job as bullet magnets and allowed the supporting squad to cross the stream. 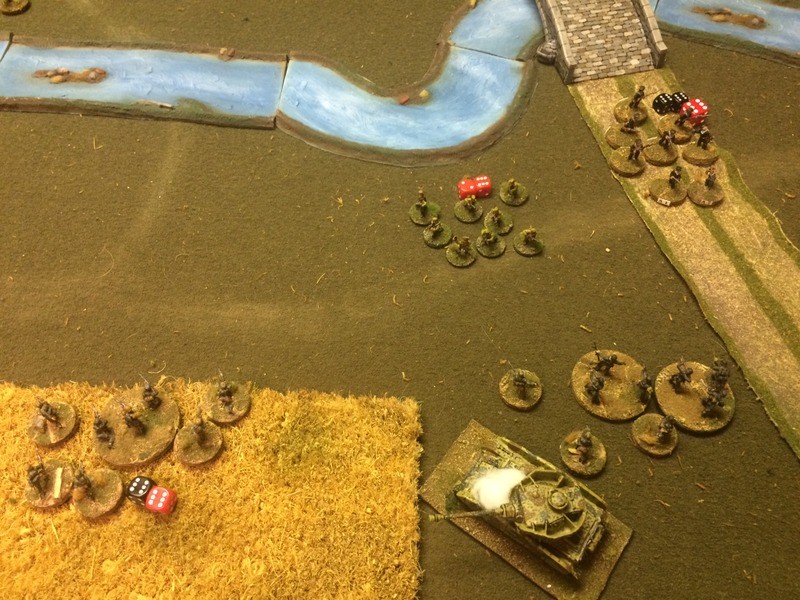 With two hits remaining to it, the T34 (an Armourfast model) charges the hill occupied by the mortars (represented by the command figure) only to be KOed by a lucky shot from the infantry in the background. 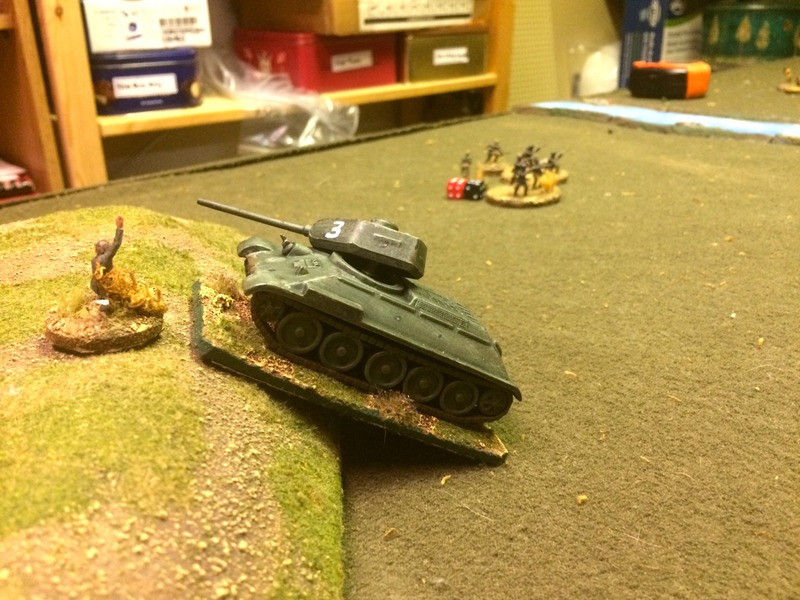 Game ended on Turn 9 with all German infantry wiped out, and two surviving Russian infantry racing for the hill to take out the mortars.   I decided it was a Russian victory. 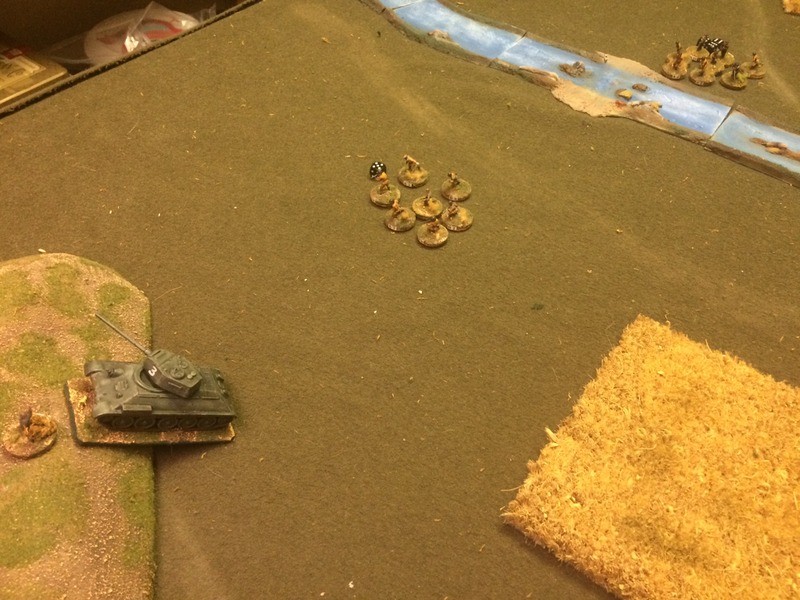 So an enjoyable game, and easily played in a hour.  It would be churlish to say anything bad about a rules set that aims to deliver a complete game in 2-3 pages.   So, if one wants a game with:

2) No morale rules - you fight to the last man

3) No troop quality rules - everyone fights the same

… then this game is for you.    I also have to say that I didn’t find the WW2 game that different from the medieval game I played.  Both felt slightly generic.

However, as I said, I am being churlish.   The book delivers short, playable games that would be good introductions to the hobby to newcomers and young people, and I suspect have some tactical complexity that I have not yet begun to appreciate.  I could even see a niche subset of tournament games using these rules.   More importantly, OHW delivers an excellent supply of scenarios, and as I’ve said here before, I really really suck at designing good scenarios.

Having set up this board, I decided to use it and the control the river crossings to revisit my favourite tactical level WW2 rules, Chain of Command. This is to do my bit in Too Fat Lardies’ Chain of Command Challenge for September.  I kept it as Soviets vs Germans, but made the table a little sexier to reflect a more tactical environment.   If you wish, you can follow my progress on Twitter, as I will be tweeting updates as time permits.  Follow me at @madpadre1 or by hashtag #spreadthelard.  I’ll do a complete report here when the dust settles.