I Take The Chain of Command Challenge

If you live on Planet Lard, you’ll know about the Chain of Command Challenge.  Following  a very erudite and thoughtful post by the Aussie blogger Trailape, on the merits of Too Fat Lardies’ WW2 skirmish rules versus the leading brand, Big Rich of TFL has invited other war gamers to try Chain of Command and post their thoughts on it.

I’ve been a Lardite for some years now, and before CoC came out I was a devotee of their previous skirmish rules, Troops, Weapons and Tactics, which suffered from an unfortunate acronym.   I quite enjoyed these rules, but have played CoC enough times to find it a superior set of rules.   The card-driven sequence of TW&T and the mechanism of initiatives that can be claimed by other player as they draw their leader cards (very similar to the system in TFL’s Sharpe Practice rules) was clever, but the use of dice to generate initiatives in CoC is much easier and, I think, far more subtle.  CoC is a better system than its predecessor, I think.

So I’m not sure, being a servant of the Lard, that I really qualified to take the Lard Challenge, but I decided to reset the table that I had created last week for a OHW scenario, with a little more scenery to reflect a more nuanced tactical game.   Same idea, there is a stream with two crossings (bridge and ford) and victory to the side that is able to control both crossings.  Here’s the table after the end of the patrol phase.   Both sides have Jump Off Points within 18” of the stream. 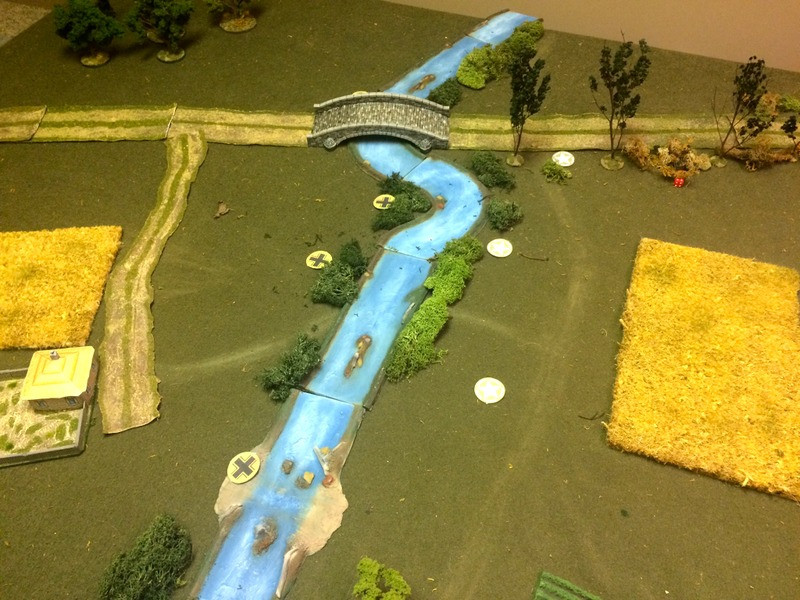 I tried to do my bit for technology and tweeted the game while I was playing it during my spare time in the last week.  You can follow me on Twitter (@madpadre1) or by using the hashtag #spreadthelard if you’re so inclined.  This report will be a little less detailed.

Germans get two rifle squads up to the stream.  First squad in the lower picture pushes its rifle team across and into the woods, hoping to dominate the open ground that the Russians must cross. 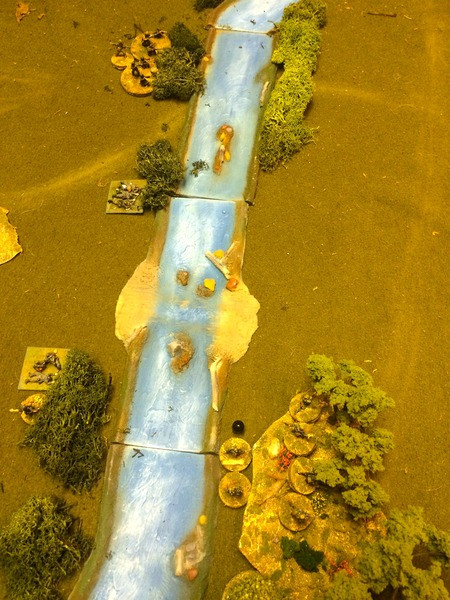 Russian support choice rolls onto the table - a KV1, headed for the bridge.  That’s an old ESCI model. 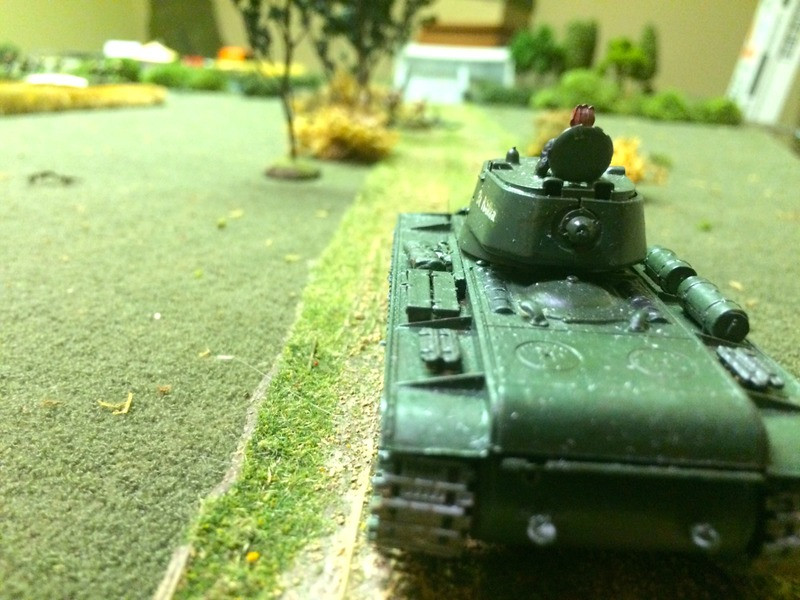 Russian LMG team on a hill peppers the rifle team in the woods and does a surprising amount of damage over several turns, killing one landser and spreading shock. 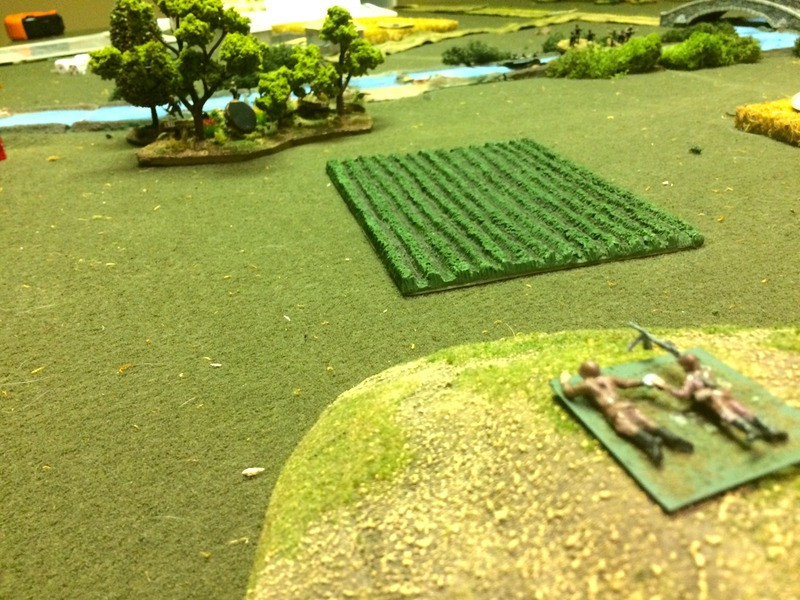 While another Russian squad exploits its jump off point on the road to rush forward and catch the German second squad as it slowly fords the stream.   They will also do damage, and force the Germans, now flanked, to abandon their questionable decision to hold the far bank of the stream. 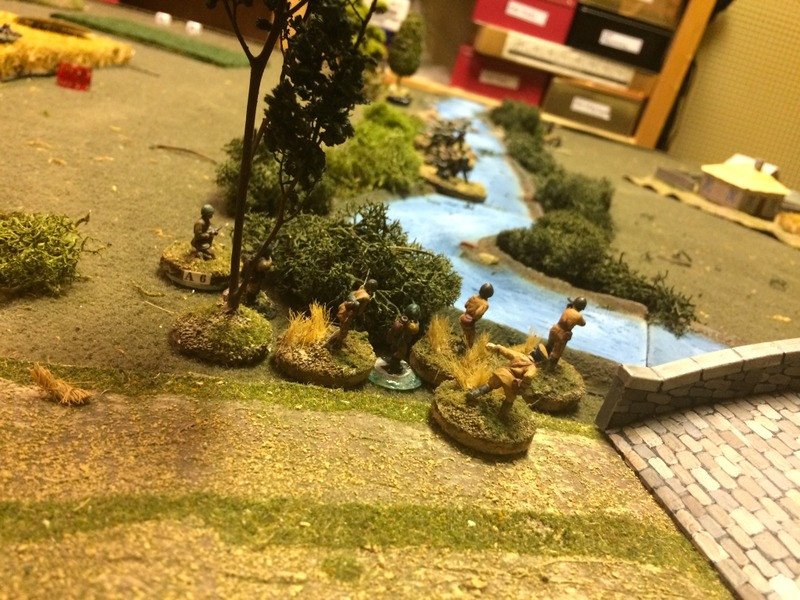 It takes a while, but the KV1 lumbers forward and onto the bridge, which is covered by the German third squad in the woods.   I decided on a low (5%) chance that the bridge would not support this heavy tank, but the bridge holds. KV1 now begins happily shelling the Germans in the wood. 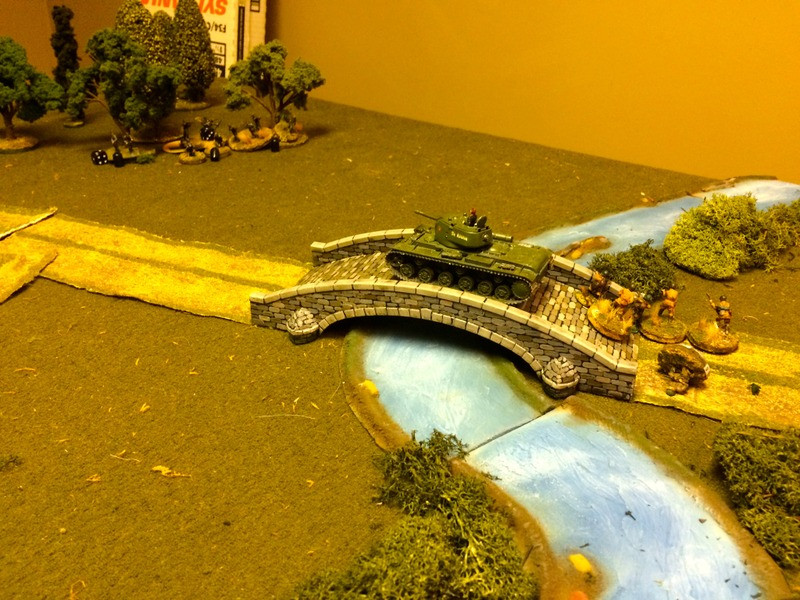 Sometimes a game hinges on one or two key plays.  In this case, I had deduced to randomize the German support choices, and got a flamethrower team, which was attached to third squad.  Since the Germans have a second turn (two sixes in their Command dice roll) they rush the flame-thrower team into the open, planning to hose the tank with flaming death in their next phase.  At the same time, the German panzershcreck team which is part of platoon HQ also rushes forward. If the flamethrower doesn’t cook the tank, maybe they will.  Sadly, the Soviets have a Chain of Command dice, and use it to interrupt the Germans.  The KV1 opens up with coax and wipes out the flamethrower team. 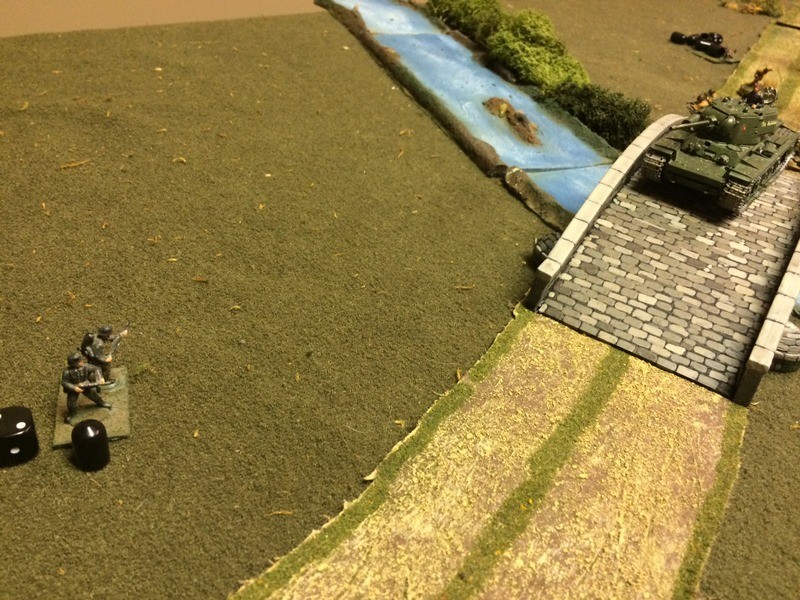 However, the panzershcreck team is untouched and takes its shot. It’s about 20 inches range, and that stone bridge partially obscures the KV1.  But, incredibly, the AT team rolls an “11” on 2d6, enough to hit!

A satisfying handful of dice get chucked.  Thirteen German strike dice (white) hitting on 4-6 for the flank shot, vs the KV1’s 8 five.  Sadly not enough for the tank.

Hurrah!  Feldwebel, get those men some Iron Crosses and an extra bratwurst, they’ve deserved it. 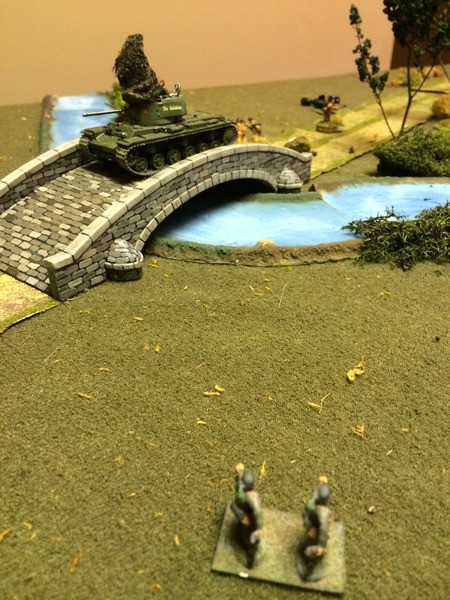 That was about it.  I realized, quite late in the game, that I had handicapped the Germans by not giving them their 8 dice for their belt-fed MG42s, instead giving them the same 6 dice that the Russian LMGs got.  Once I sorted that out, and with three intact LMG teams, the Germans were able to keep the Russians at bay when they got up to the stream, and it ended in a German victory.  What a nail biter!   The German landsers had taken a real beating in their hasty and bloody retreat back across the stream, and if the AT guys had missed the tank …  a very satisfying and suspenseful game.

Last night, I took my 20mm kit to what has become my new games club, an eclectic bunch that plays boardgames and miniatures just as happily.    I set up a busy looking table somewhere in Normandy, using my German and British figures.   Sadly, I was too involved in helping run the game to get many pictures, and while we didn’t get a complete game in, we had fun. 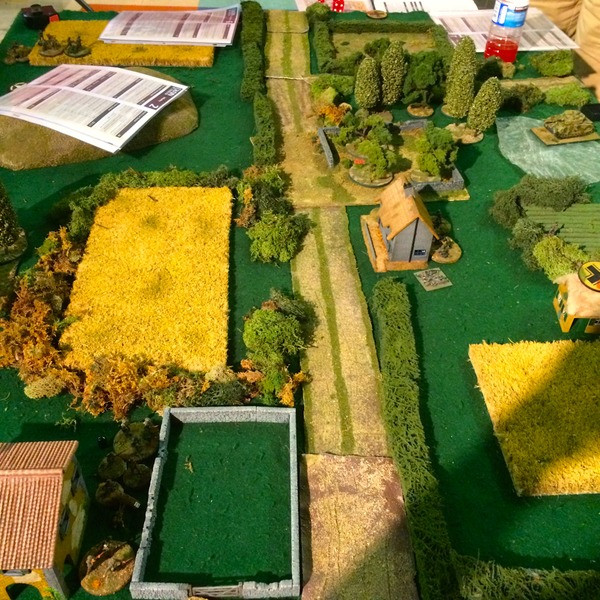 Tommies (Valiant and Revell figures from my collection) line a hedge and prepare to open up on the oncoming Germans.   Of the three other fellows, two had played CoC before and quite liked it, finding it more realistic than Bolt Action.   The third had played Disposable Heroes and Flames of War, but had never played CoC before, and he had very complimentary things to say about CoC after his first game. 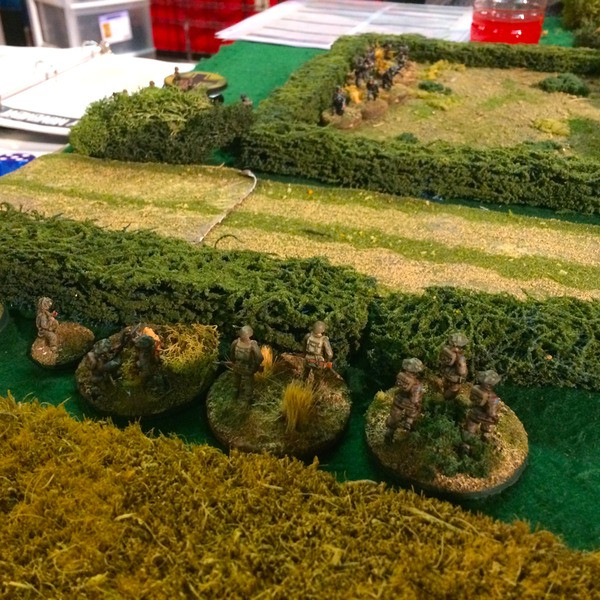 Two games in a week was a real luxury for me, and confirmed my fondness for these rules.   Even though I’ve played CoC about a dozen times, I still find myself getting things wrong.  In last night’s game, I gave a -1 to a German panzerschreck team when they deployed onto the table and took a shot on a Cromwell.  I had ruled that deploying onto the table counted as a move, and I was wrong.  Rule 4.3.1 clearly states that troops deploying onto the table cannot move in the same turn as they deploy, but they can shoot to full effect.

I suppose the second game, which allowed a war gamer to try CoC for the first time, allows me to qualify for the Challenge after all.  :)  If reading this post or my tweets has you curious, you can get yourself over to the TFL shop and save 20% on CoC purchases for the rest of September!