A Visit to the Citadel Petersberg, Erfurt, Germany

Madame Padre and I returned this weekend after ten all too brief days in Europe, where I was attending a conference.   We decided to make it into a holiday, despite Mdme having just received her first session of chemotherapy.  Her doc assured that she would have no problems,  despite having just had minor surgery to implant a shunt for the delivery of one of her drugs.   Go have fun while you can, doc said, and Mdme, always the feisty one, took up the challenge.  By and large she did beautifully, managing to do quite a bit of walking and sightseeing with plenty of rest periods where she sipped the excellent German coffee and I sipped beer.   A win win, I thought.

My conference was in the Thurnigian town of Erfurt, a medieval university town whose most famous alumnus was Martin Luther.   Erfurt was in the old DDR, and so most of the local residents over 30 speak little English. The town appears to be off the normally traveled tourist routes, which is a pity because Erfurt is a gem of a town  The old town centre survived the war largely intact, and after unification a ton of money was poured into the place. Today it looks clean and unspoilt.   We found lots to do for our week there.

Erfurt has a long association with the Napoleonic Wars.   Most well known is the Congress of Erfurt in 1808, when the Emperor tried to to charm Tsar Alexander into giving him a free hand in Europe.  I have some photos of sites associated with the Congress which I’ll save for a later post.  Today I thought I would offer some photos of our trip to the Citadel Petersberg, which is apparently the best-preserved Vauban-style fortress in an urban area of Europe.

Erfurt’s medieval walls no longer survive, except for this specimen that Mdme. is examining on a disappointingly cold and overcast day. 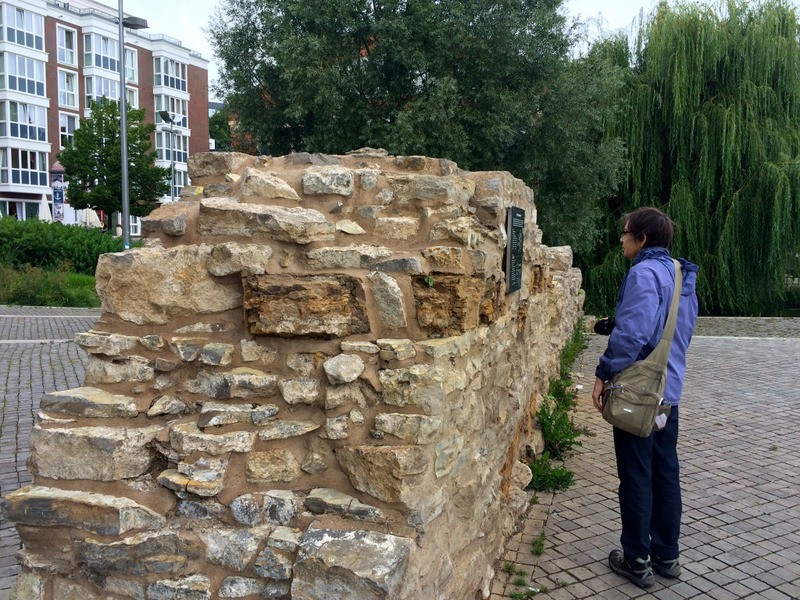 Map of the medieval walls showing the 17th century Citadel at the top left.  One doesn’t see much English in signs and museum placards in this part of Germany. 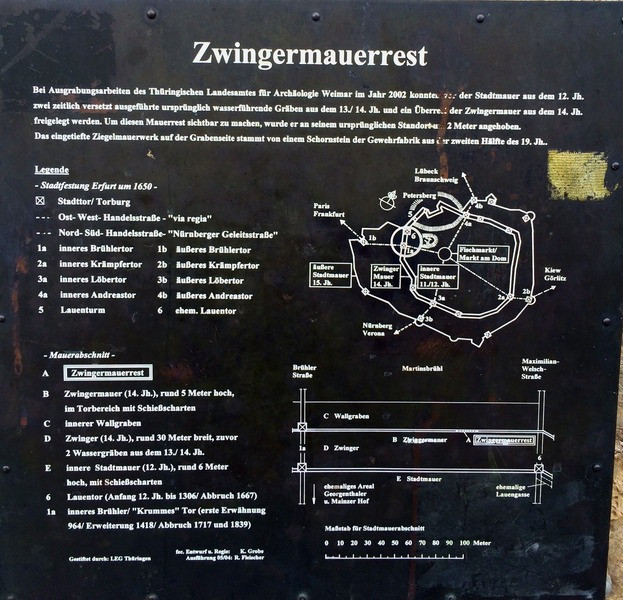 The Petersberg Citadel dates from the late 1600s.   It was built on a sizeable hill that dominates the town, and which was occupied by Benedictine monastery.   After the Treaty of Westphalia, Erfurt became subject to the Elector of Mainz, who was given permission to build the citadel.   The Elector employed an Italian architect, Antonio Petrini, and the fortress was finished by 1702.  So, it’s initial function wasn’t to protect Erfurt so much as to oppress the people of Erfurt.   I have all this from the Wikipedia entry thanks to Google Translate, or from history sites such as this one.  One can get tours of the Citadel thanks to Thurinigia Tourism, but they are only offered in German, so my visit was very much self-directed according to scraps gleaned over the internet.  Here’s a few of the Kiiian Bastion, one of the first works to be completed. 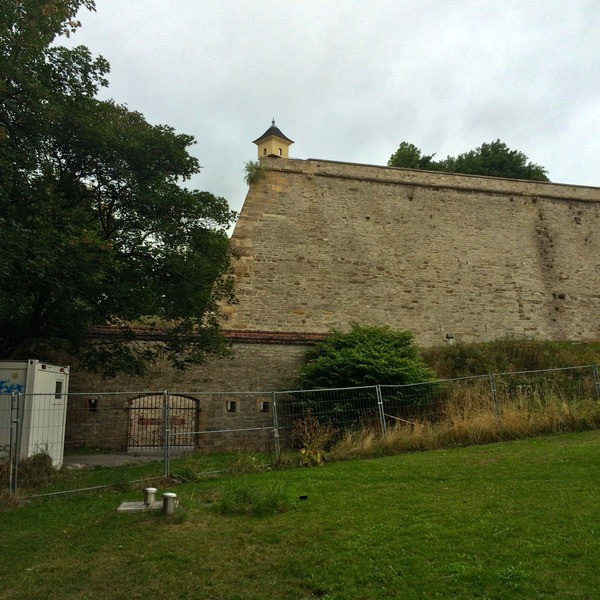 Approaching the main gate from the side.   The glass structure visible in this shot is a modern restaurant, which commands an excellent view of Erfurt and the surrounding countryside. 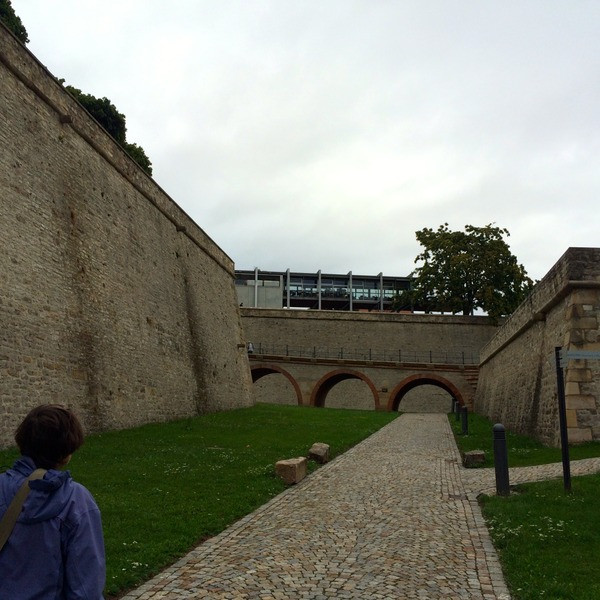 Mdme. Padre kindly demonstrates the height of the walls of one of the bastions. 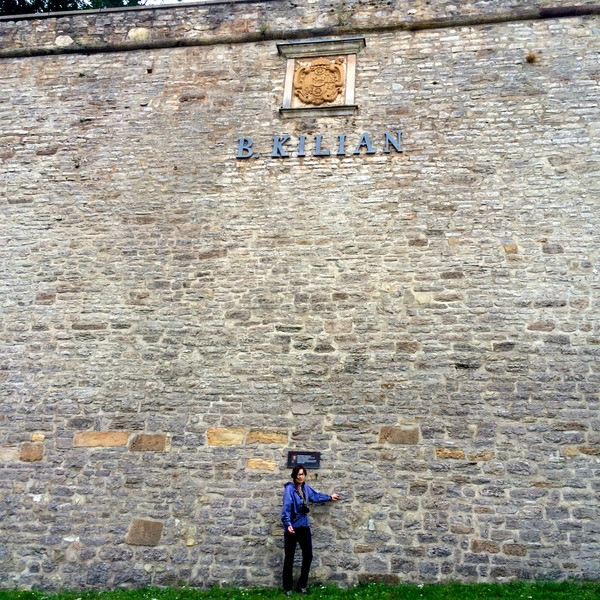 Just to rub the noses of the burghers of Erfurt in it, the arms of the Archbishop of Mainz are prominently displayed in many places. Erfurt became part of the Kingdom of Prussia in 1802.  The Citadel was slowly improved through the 18th century, and again by the Prussians. 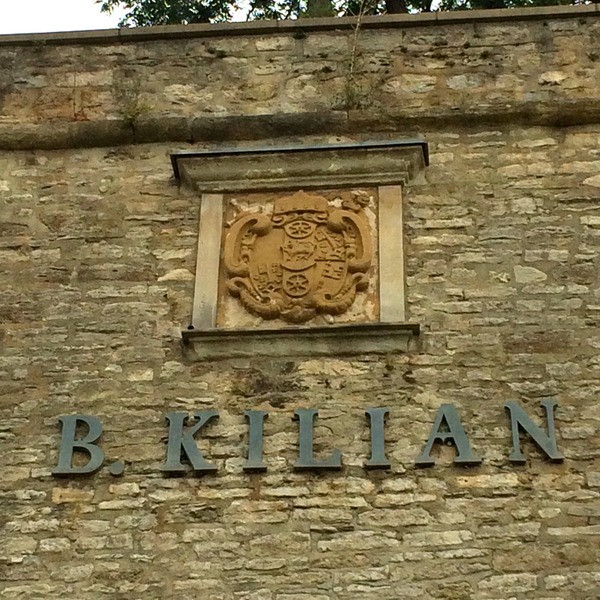 In 1806, following their defeat at Jena, a horde of demoralized Prussian soldiers sought shelter in Erfurt.   They were soon followed by Murat’s cavalry, which routed the Prussian rearguard.  Mollendorf, the hero of Leuthen and Torgau, had been wounded at Auerstadt and could not hold the Prussians together.  The Citadel’s commander surrendered to Murat, one of the few times surely when a fortress surrendered to a  force of cavalry.  A sad end to the career of this hero of Prussia.  Mollendorf was captured, and later this old soldier received the Legion of Honour from the Emperor.

A view of the Peters Gate, the entrance to the Citadel.   The structure on top is modern, and as far as I could tell is used by a local youth group.  The Citadel has no military function today.  Some of the buildings are used as apartments, others for offices, and some are unused and in disrepair.  Sadly, there was no military museum or interpretive centre that we could see. 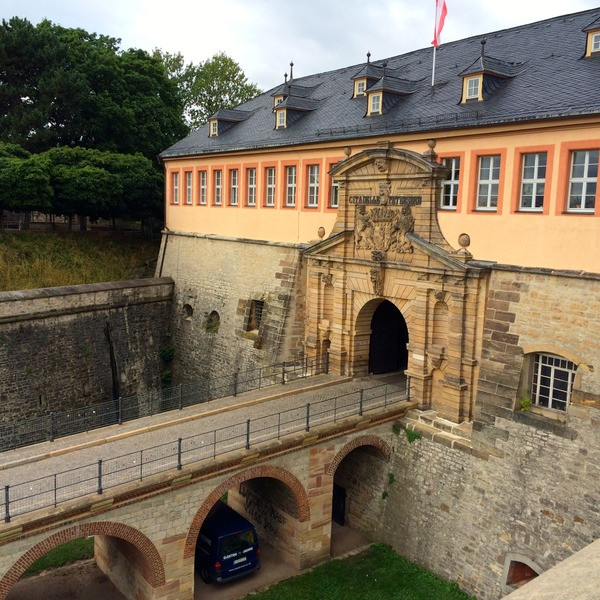 A view of the fortifications flanking the approach to the Peter’s Gate.  With determined troops holding this place and shooting out from these loopholes, storming the gate would have been a painful proposition.  I’m inclined to agree with the author of the Wikipedia article on the surrender of Erfurt:  “Historian Francis Loraine Petre remarked that Erfurt was the first of a series of ‘pusillanimous capitualtions’ by Prussian fortress commanders”. 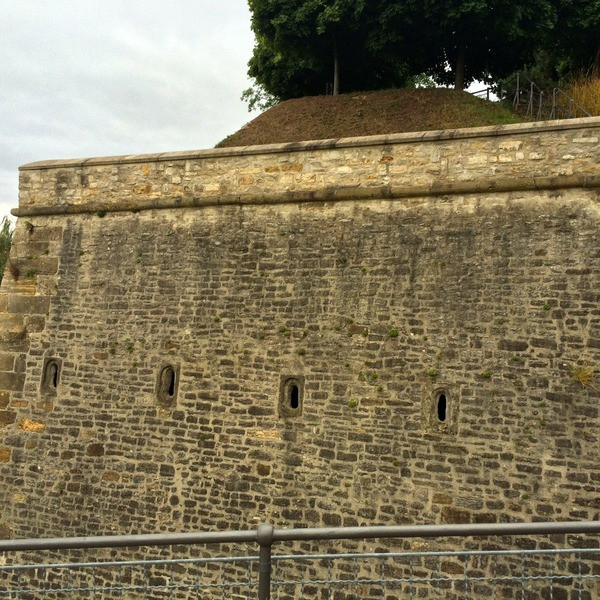 Standing in the Peter’s Gate looking out.  You can see the two churches on the lesser hill which dominate the Domplatz, the large square at the heart of Erfurt.  Both churches date from the 12th-13th centuries and are absolutely stunning inside. 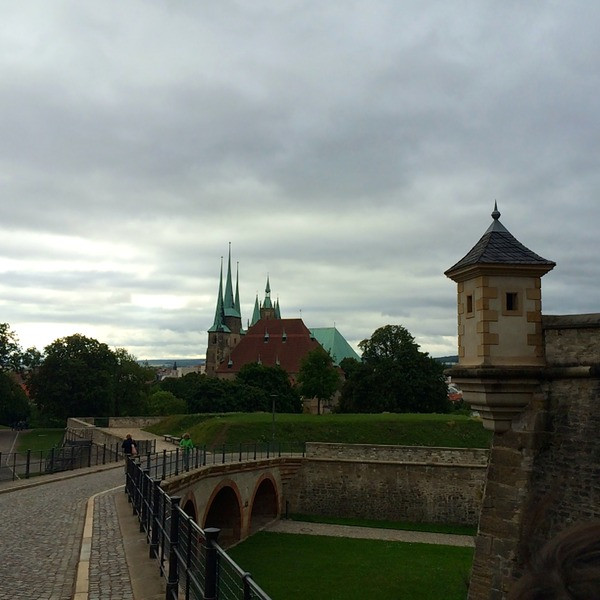 The Peter’s Gate from the inside, showing the portcullis still in place. 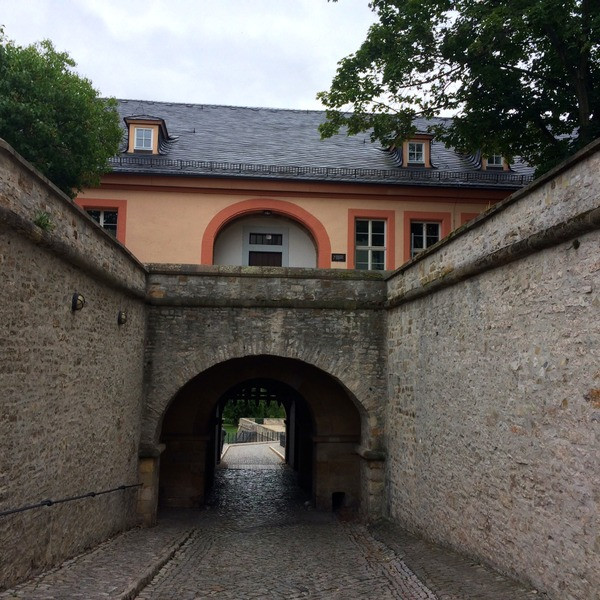 The Benedictines were kicked out in 1803, and their monastery of St. Peter and Paul became the garrison chapel, the Peterskirche.  It must have been a lovely church in its day, but sadly now is a hulk.  This sculpture survives from happier days - I am guessing it is at least 14th century. 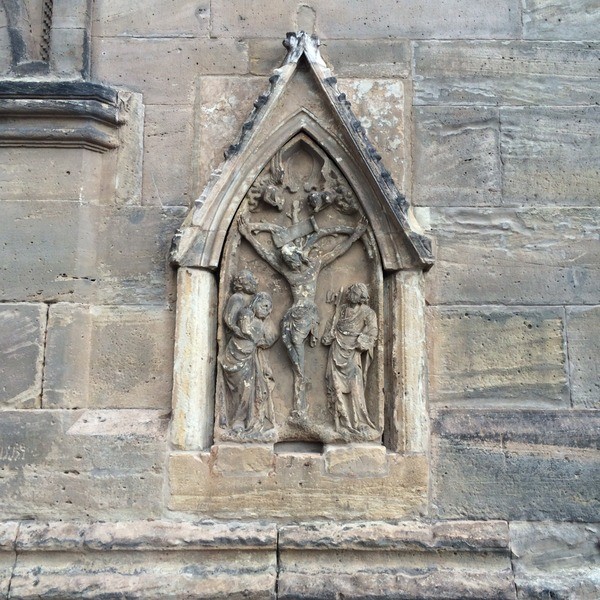 Some of the buildings inside the fortress have been restored since the unification of Germany, and some have not.   This is one of the barrack buildings they haven’t gotten around to yet.  It’s interesting to reflect on the troops that would have lived here and paraded in front of it.   Oudinot’s Old Guard would have gone through their paces here to impress Tsar Alexander during the Congress of Erfurt.   Since then, Prussians in the 1800s and Friekorps, Wehrmacht and DDR troops have all been based here.  Today the presence is all civilian. 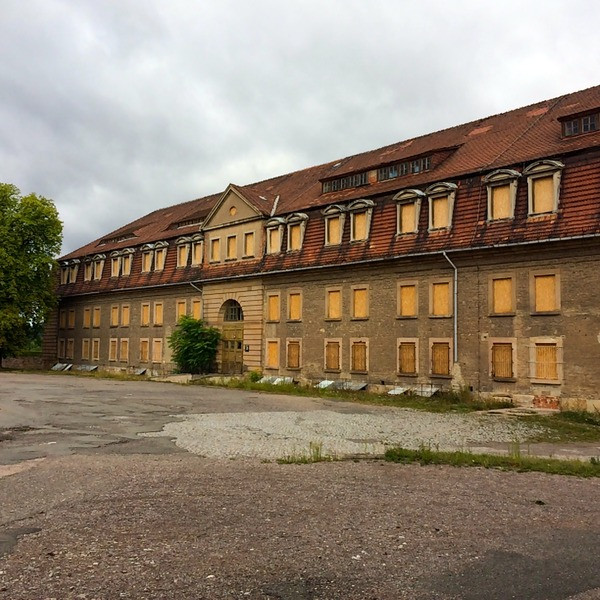 I’m not smart enough to judge the provenance of this artillery piece, but it looks Napoleonic at least.  It is parked in front of the Commandant’s residence, which today, from what I can tell, houses the Thuringian provincial government department that oversees monuments and historical sites.   During World War Two the commandant’s house was the site of a military court.   Political and military prisoners were detained in the Citadel, and today a monument exists to the unknown deserters of the Whermacht.   At least fifty of these were executed in the Citadel.  Another layer of history:  today the Citadel houses the state office responsible for administering the records of the the secret police, the Stasi, from the DDR days. 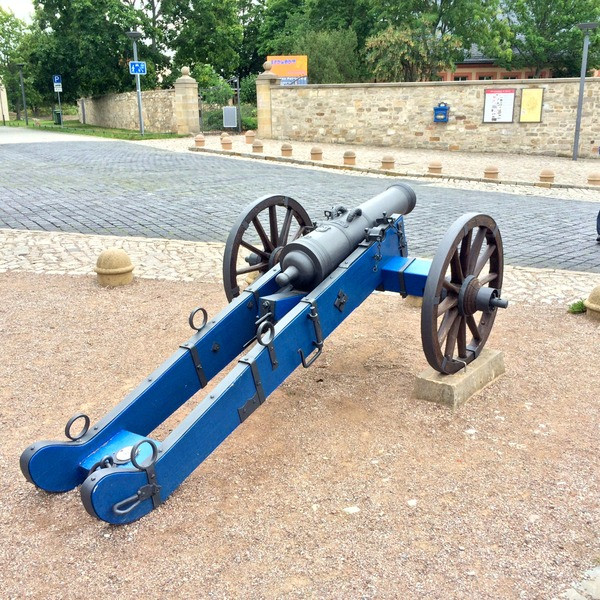 By early 1813, Napoleon’s troops were fortifying the Citadel, which was a good idea, because Erfurt became a target after the Battle of the Nations, not too far to the east at Leipzig.  The Erfurt garrison commander was General de Brigade Alexandre Dalton, who refused a demand for surrender from an army of Austrians, Prussians and Russians under Nollendorf.  Dalton’s troops were evicted from the town of Erfurt, which caused much rejoicing among the burghers.   This painting by the mid 19th century historical painter Peter Janssen shows an actual episode, the locals destroying a wooden obelisk built in 1811 in Erfurt’s Angerplatz to honour Napoleon.   Judging from the painting, it wasn’t that sturdy an obelisk, not one of your quality stone jobs. This postcard shows an initial scene of the siege, with the fortress and the heart of Erfurt under shellfire.   The obelisk in the centre right is your genuine stone version, and not the one in the previous image.  It is still there today.  The wooden buildings at the foot of the Citadel are gone now and the square, the Domplatz, is much more open today than it evidently was in 1813.   The two churches on the right, the Cathedral Beatae Virginis (left) and of St. Severis (right) are intact, but the spires on the Peterskirche in the Citadel (right) are gone. 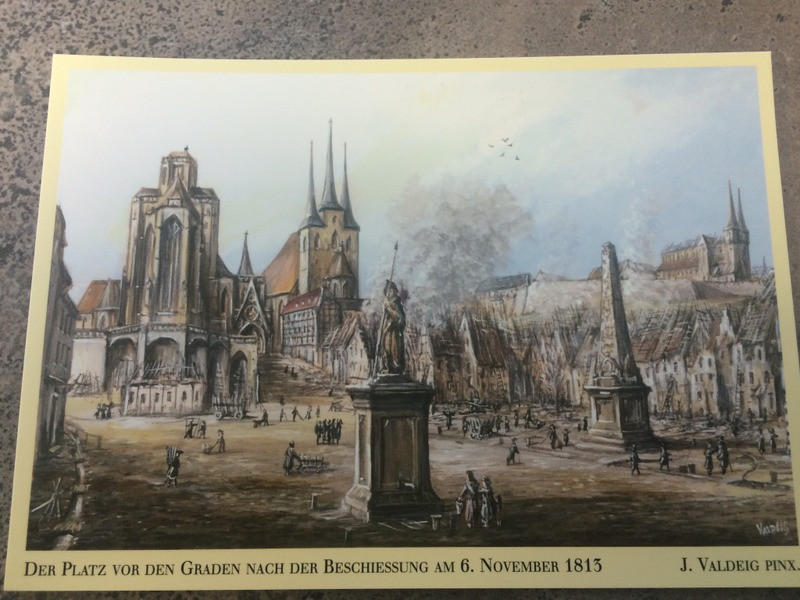 Dalton’s garrison abandoned the town and retreated into the Citadel, where they held out until May of 1814, when they were ordered to surrender by the French government.  Looking at the fortress, it’s easy to see why they held out.I saw this framed print on the wall of a cafe on the Domplatz and photographed it.   You can see what a protracted siege it was.  The ruined buildings in the postcard are gone, and have been replaced by extensive dugouts and bomb proofs once the siege lines were established. 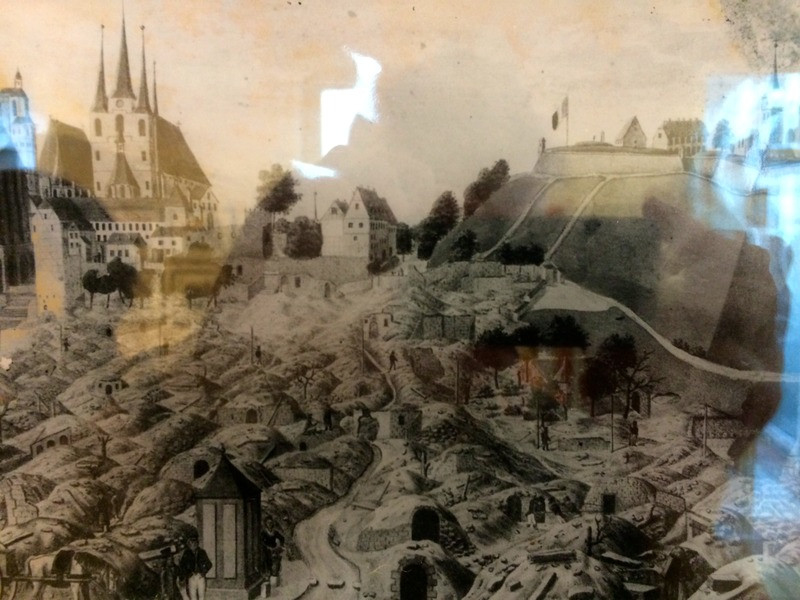 This picture from the walls of the Citadel shows what a commanding view the defenders enjoyed, and why all those dugouts were necessary. 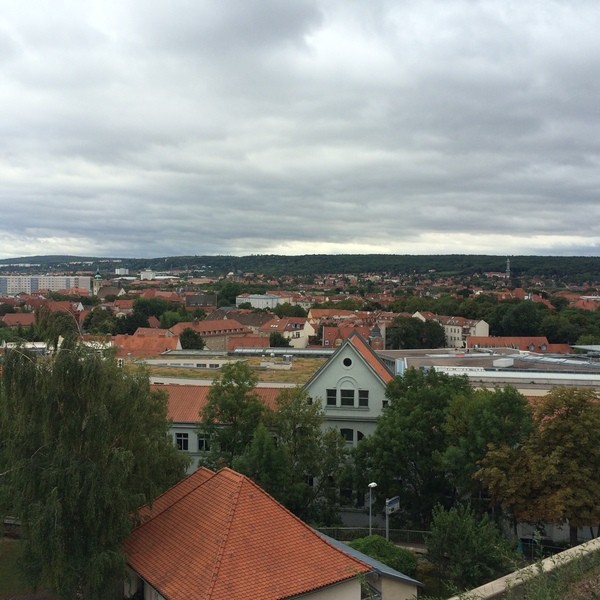 There is a book on the 1813-1814 siege of the Citadel by a Frank Palmowski.  It is, unfortunately, only in German.  I picked it up in a bookstore in Erfurt, thought about whether the 20 euro price would be an incentive to learn German, and decided, sadly, to leave it behind.  Perhaps German readers may know more about this story, but I found it a fascinating piece of Napoleonica.   If you are ever in the part of Germany, I encourage you to visit this charming little town.