"We Shall Go to Erfurt": In the Steps of Napoleon

"We shall go to Erfurt. I want to come back with the freedom to do what I want in Spain; I want to be very precise with Russia regarding our involvement in the Levant. Prepare me an agreement which will satisfy the emperor Alexander, one which above all must be directed against England and in which I shall be at ease regarding the other points. I shall help; we shall not want for prestige.”  Napoleon to Talleyrand

In my last post I promised a few photos of sites associated with the  1808 Congress of Erfurt, an event that we would describe today as a summit meeting.   Napoleon was looking for a free hand in Europe, and trying to impress Tsar Alexander.  It didn’t work out, because as you know, Napoleon and Alexander never exactly became BFFs.  There’s a good summary of the meeting here.

One of the venues we saw was the Kaiseraal, a concert venue which was used by Napoleon to impress his guests.   The Comedie Francaise was summoned from Paris to stage no less than sixteen plays and performances during the Congress (all series, the Emperor did not want trivial comedies and dramas).  Napoleon complained of the expense of this “mass levy of thespians”, but felt that it was worth it to awe the kings of Europe with France’s glory.  While I was able to sneak into the lobby, and mug with a mannequin of Napoleon in the lobby (fortunately that picture is still on Madame’s camera), I wasn’t able to see anything else. 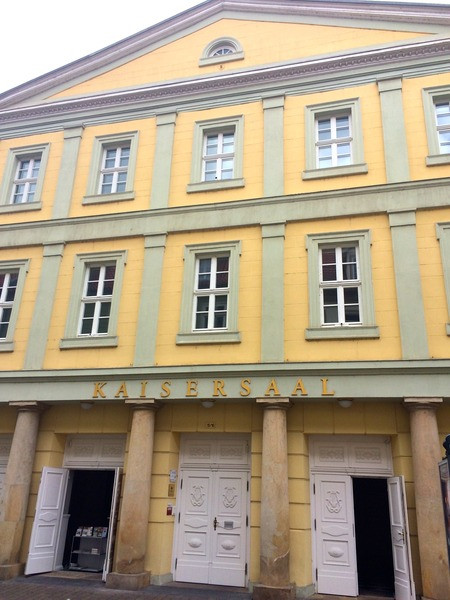 In later years, Paganini and Liszt both performed here.  As you can see from this link, the Kaisersaal is still a pretty swish place today.

Much of the conference took place at the Governor’s Palace in Erfurt.   The building  is actually two, a Baroque-era building on the left and a Renaissance era building on the right (I hope I remembered that correctly), joined in the centre by a newer entrance hall.  Besides Tsar Alexander and the other VIPs of the day, Napoleon and his court would have passed in and out of here, including Soult, Lannes, Berthier, and Davout.  Today this building is used by the government of the German province of Thuringia, so the only people we saw passing in and out were youngish looking bureaucrats. 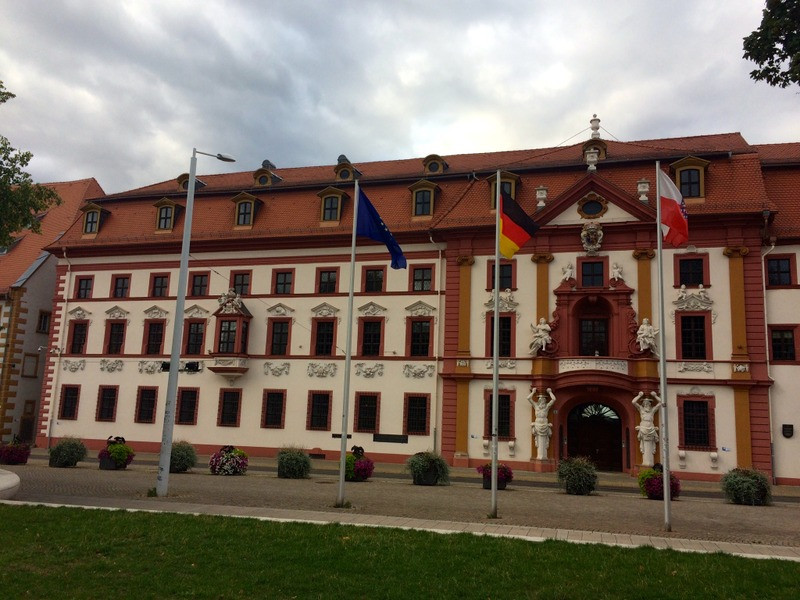 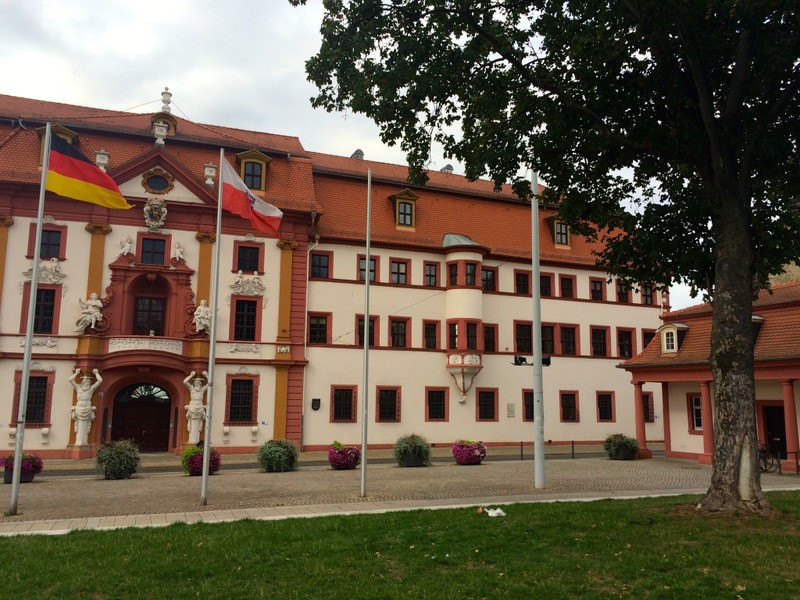 It was here that Napoleon had his famous meeting with Goethe, Germany’s secular saint of literature and culture.   It’s interesting to think that Napoleon wanted to impress Goethe.  It’s hard today to imagine any world leader going out of his or her way to impress, say, a Nobel prize winning novelist.  I guess cultural legitimacy was as important to Napoleon as political legitimacy was.   Napoleon also wanted to display military legitimacy, and some of his best regiments (6th Cuirassiers, 8th Hussars and of course the Old Guard) drilled and took part in reviews and inspections during the Congress.  A few years later, after the Battle of Nations, these once proud regiments would straggle through Erfurt on their way to the Rhine, little more than a gang of thieves, scandalizing Napoleon (and no doubt the locals) with their conduct.

Speaking of Goethe (and who doesn’t speak of him?), the great man of letters was also a bureaucrat, responsible for managing the important east/west road that went through Erfurt.   He often stayed in this building next store to the Governor’s Palace. 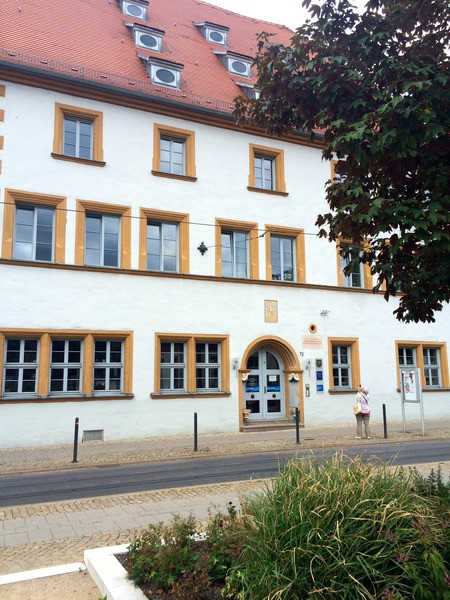 As you can see, Germans still think of Goethe as kind of a big deal. 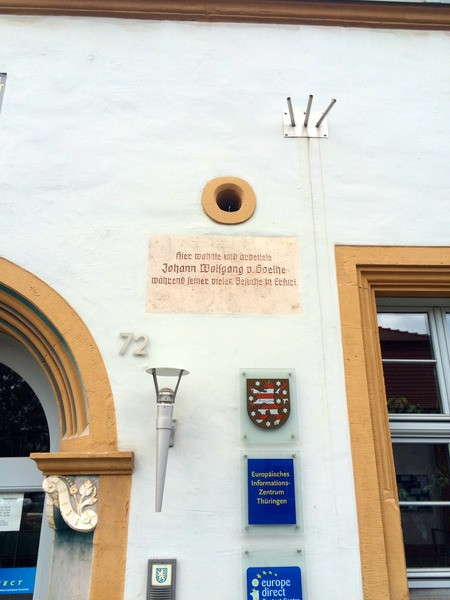 One more Napoleonic tidbit for you before we bid “Auf wiedersehen” to lovely old Erfurt.  Madame and I were strolling in a lovely park not far from our apartment, when I noticed my map showed something called the “Muffling denkmal” in the same park.   We found this little structure off in a corner.  Why here?   Wikipedia, always a good source for scholars, says that this hero of Waterloo died on his estates near Berlin, but the editor of an early translation of his memoirs reports that the estate was near Erfurt. 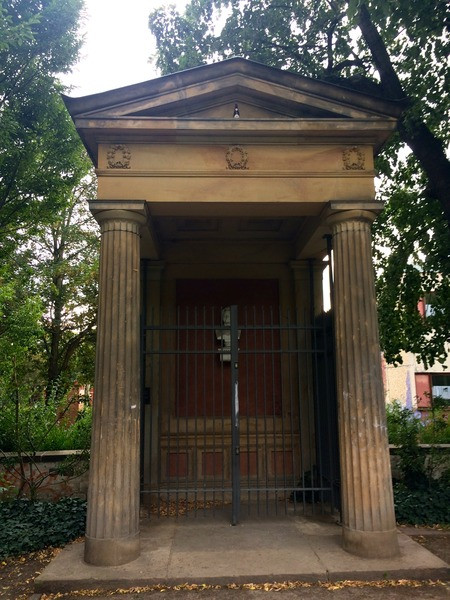 The great man, sporting some fine sideburns.   He looks like he was a pugnacious sort of fellow, making me think that the actor in the film Waterloo didn’t quite do him justice. 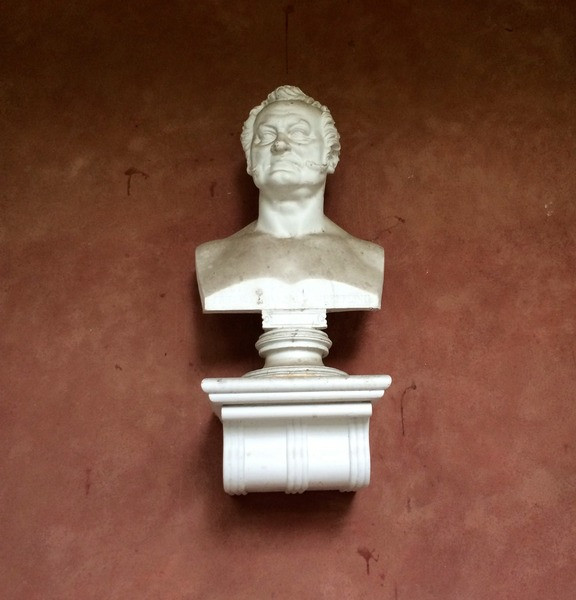 Finally, you may be asking, what were the hobby stores in Erfurt like?   I only saw one.  Didn’t go into it. But what a lovely street, with a ubiquitous church at the end of it.    In Canada we whine and moan about taxes, and consequently many streets in newer developments are built without sidewalks.   I gather the same is true of America.   The Germans don’t seem to have a problem paying for lovely, walkable streets. 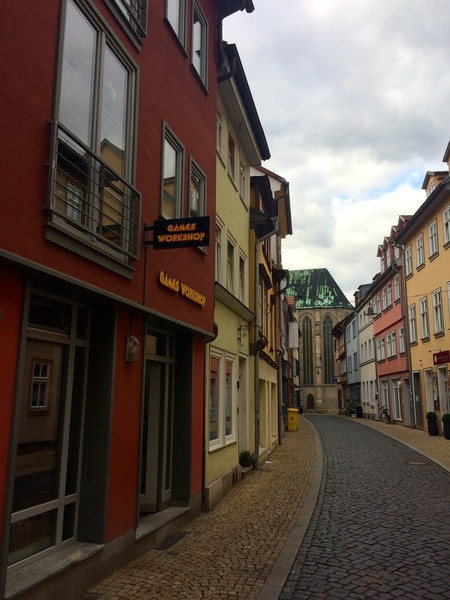