My Weekend At Hot Lead 2: Victorians On Venus

Don't read this post if you are offended by silly and lighthearted wargaming. If however you enjoy this sort of thing, pray read on.

One of the traditions with Hot Lead is the Sunday morning Victorian SF Bring and Battle. This game features players throwing their favourite Colonial troops into battle, augmenting them with whatever steampunk clanks and contraptions they can think up and scratchbuild or convert. It's also a game that sees adults and children, often parents and their kids, happily play side by side, which is quite a wonderful thing.

Here you can see the mix of adults and kids at the huge table, with their forces on the start lines. 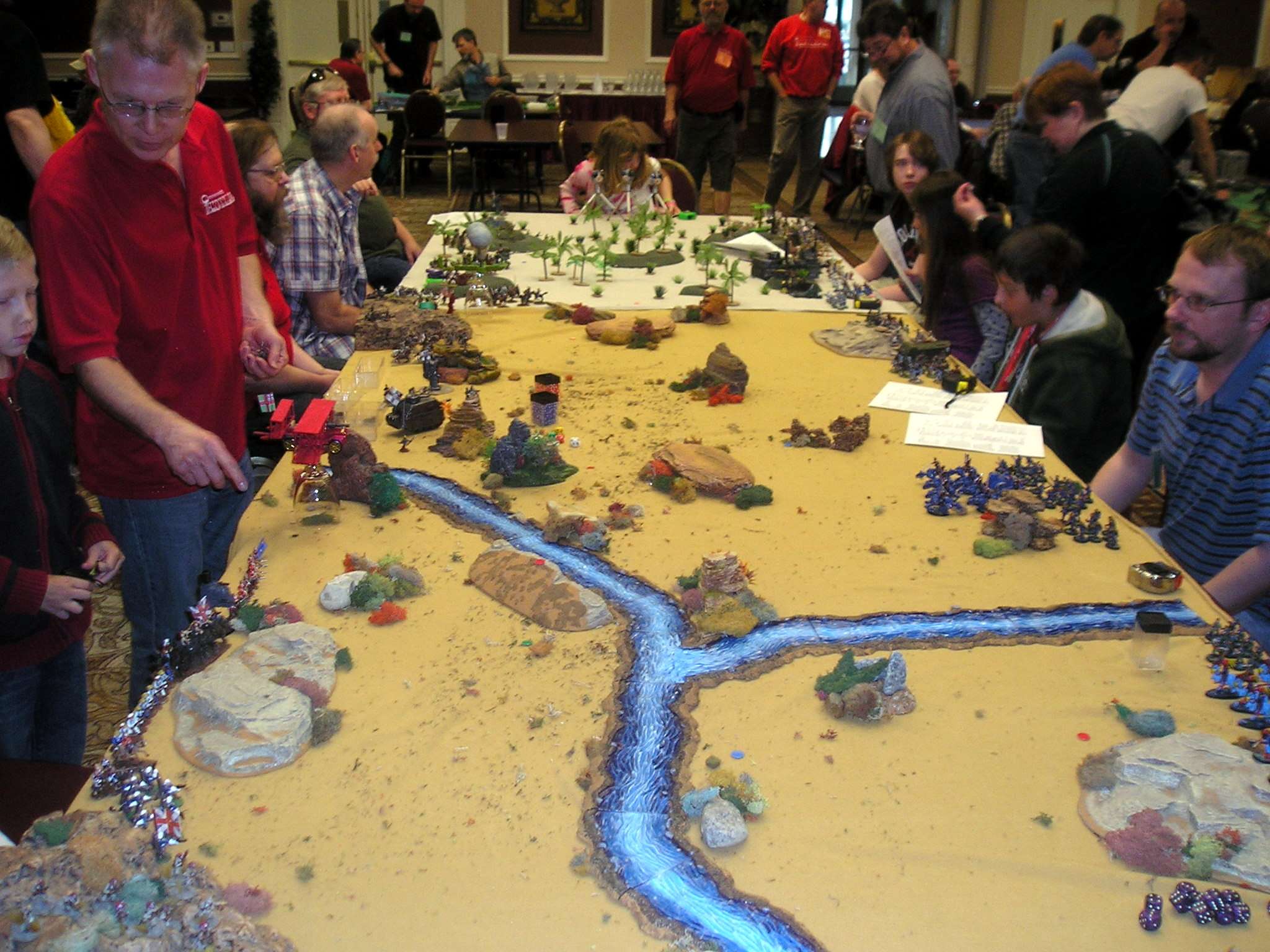 On the bottom left of the picture is Paul (Pablito) Remisch in the red shirt, with his wonderful son Will, who anchored my left flank. Will was a most helpful and reliable ally to have.

So as explained by our GM, Richard (Rico) Brayton, we were all on Venus, a planet which is the subject of the latest rush to grab bits of empire by the colonial powers and their armies of human and alien sepoys. Apparently Venus is hot and dusty and inhospitable, but has certain rare elements that are quite coveted on earth and abroad, apparently, as aliens from beyond the solar system, suspiciously similar to HG Wells' Martians, had also shown up to mine some of those valuable elements. 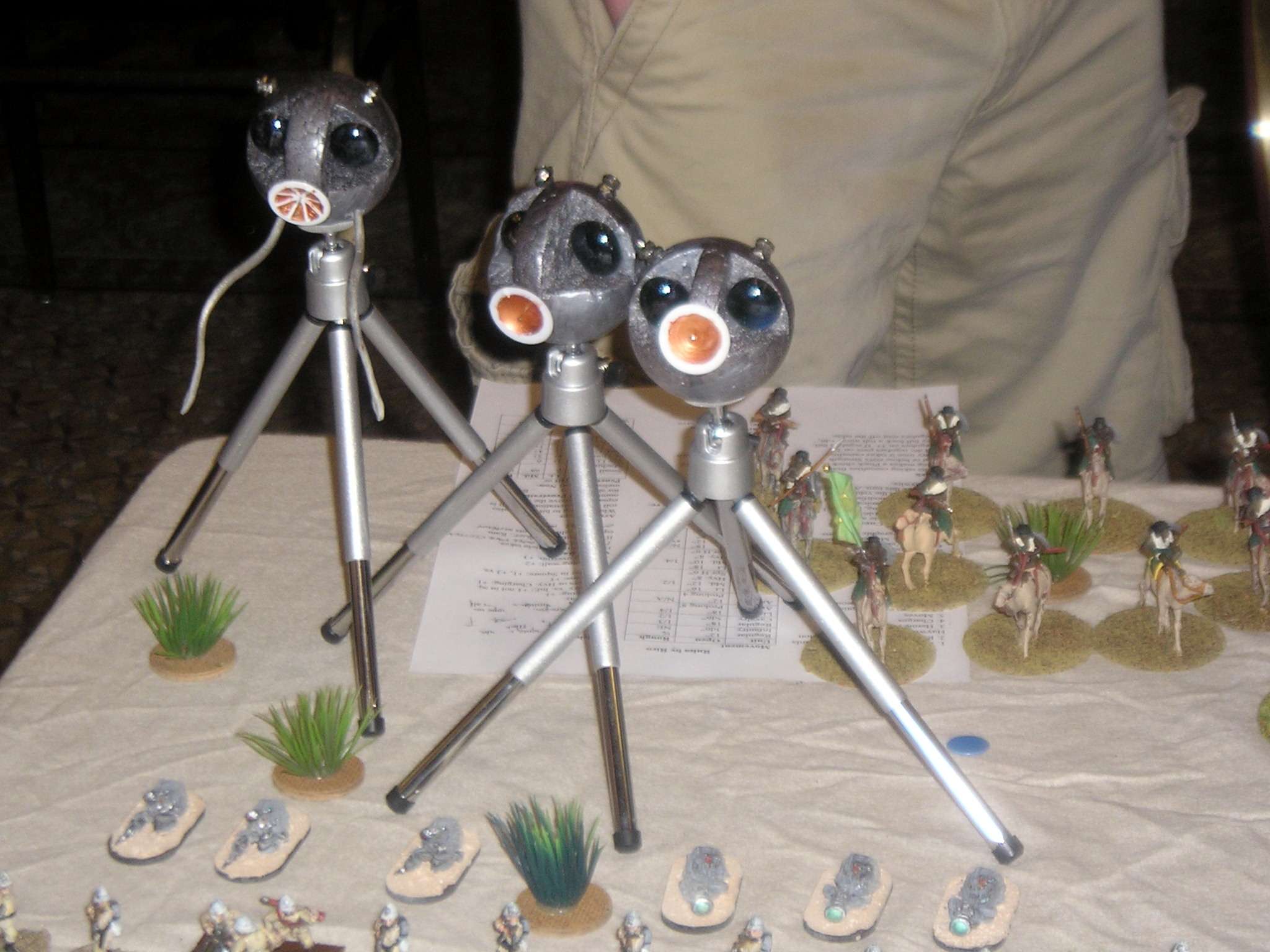 The owner of these nice tripods explained to me that they are entirely made from things purchased at a dollar store, less the tentacles on one, which he found at Historicon.

Since I had flown to Hot Lead and didn't bring any figures, James Manto kindly leant me some of his gorgeous late Colonial British and Native troops, including these beautifully painted Highlanders. Someone else kindly kitted me out with the large black steam locomotive tank, and the little walker chap at top left. 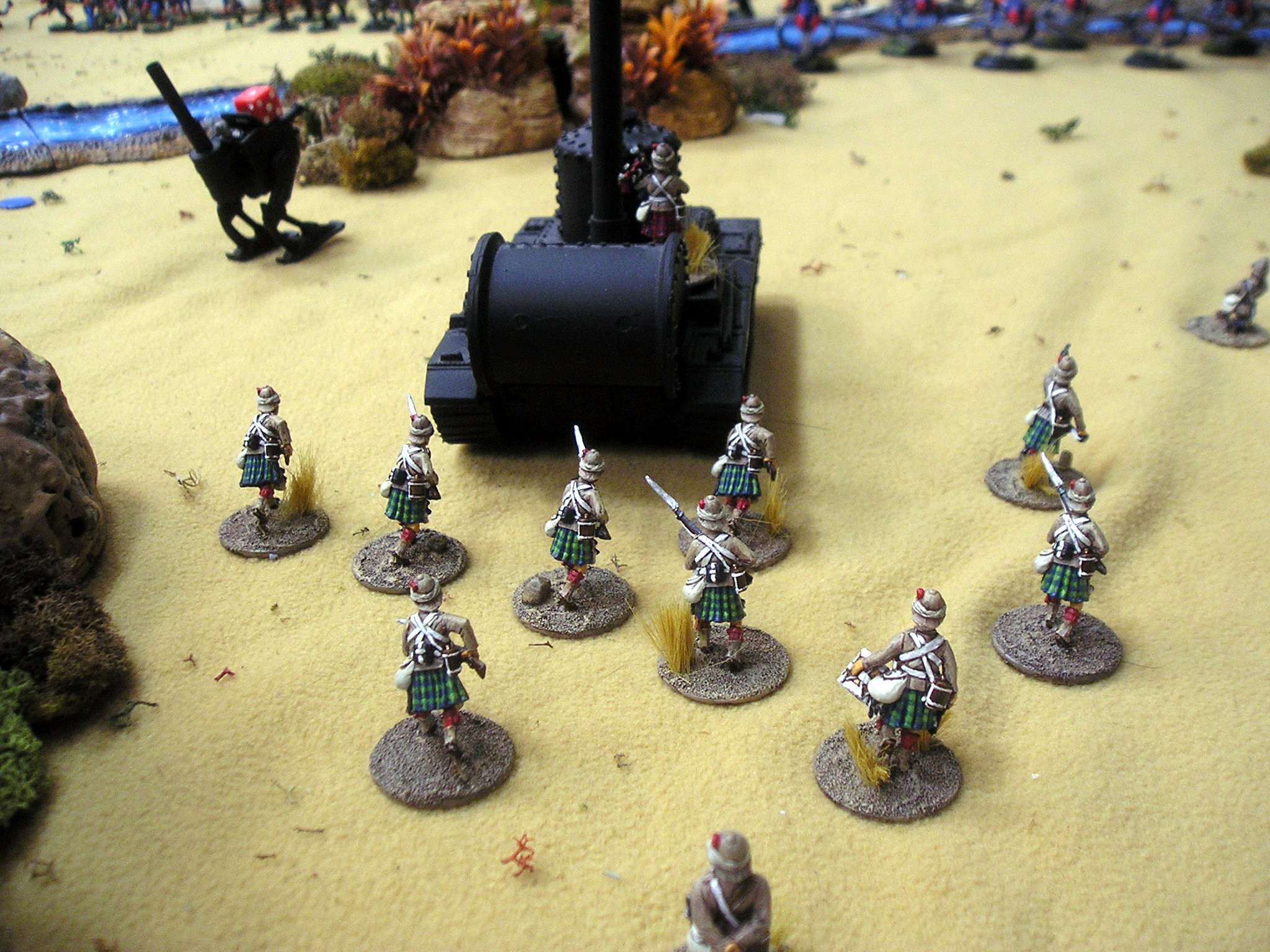 I was also given a rocket dirigible, HMS Billious, seen here doing some last minute recce while the field gun deploys ready for action front. 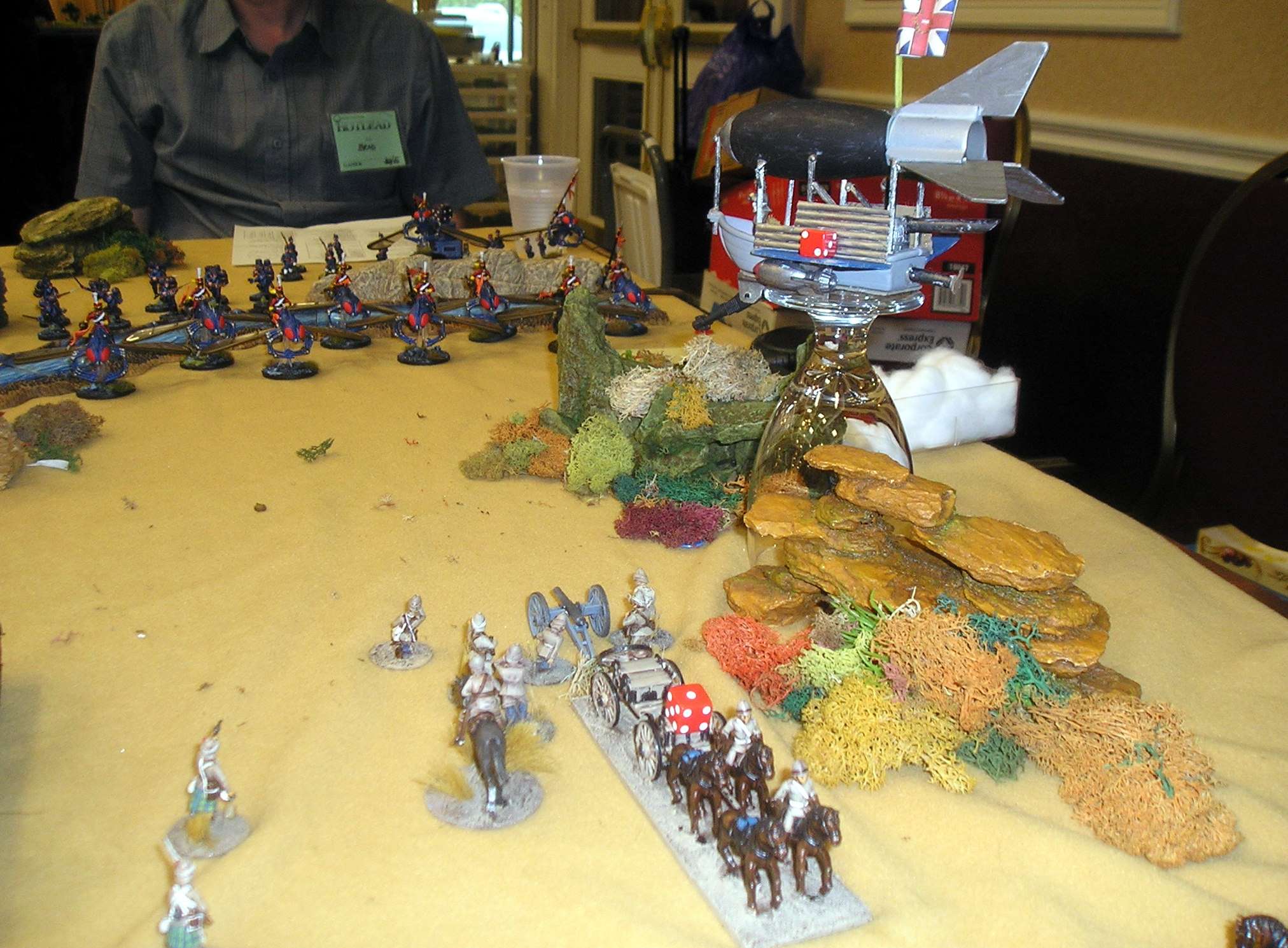 General "Stonky" Smythe-Dishrag surveys the approaching foe, the Imperial Dutch Colonial Army, consisting of rocket troops, alien Krootish mouted rifles on giant Saurian thingies (some really nice conversion work by my opponent Dave), a giant blue behemoth of a tank, and some more mounted troops riding mechanical dragonflies (more brilliant conversions). Oh, and for some reason, the legendary vampire hunter, Baron Van Helsing, was also present with the Dutch, having sniffed out vampire activity in the British colony, a most dreadful slur on her Majesty's subjects in space. Note the bagpipe player riding on the deck of the tank. That explains why its crew is buttoned up, no doubt! 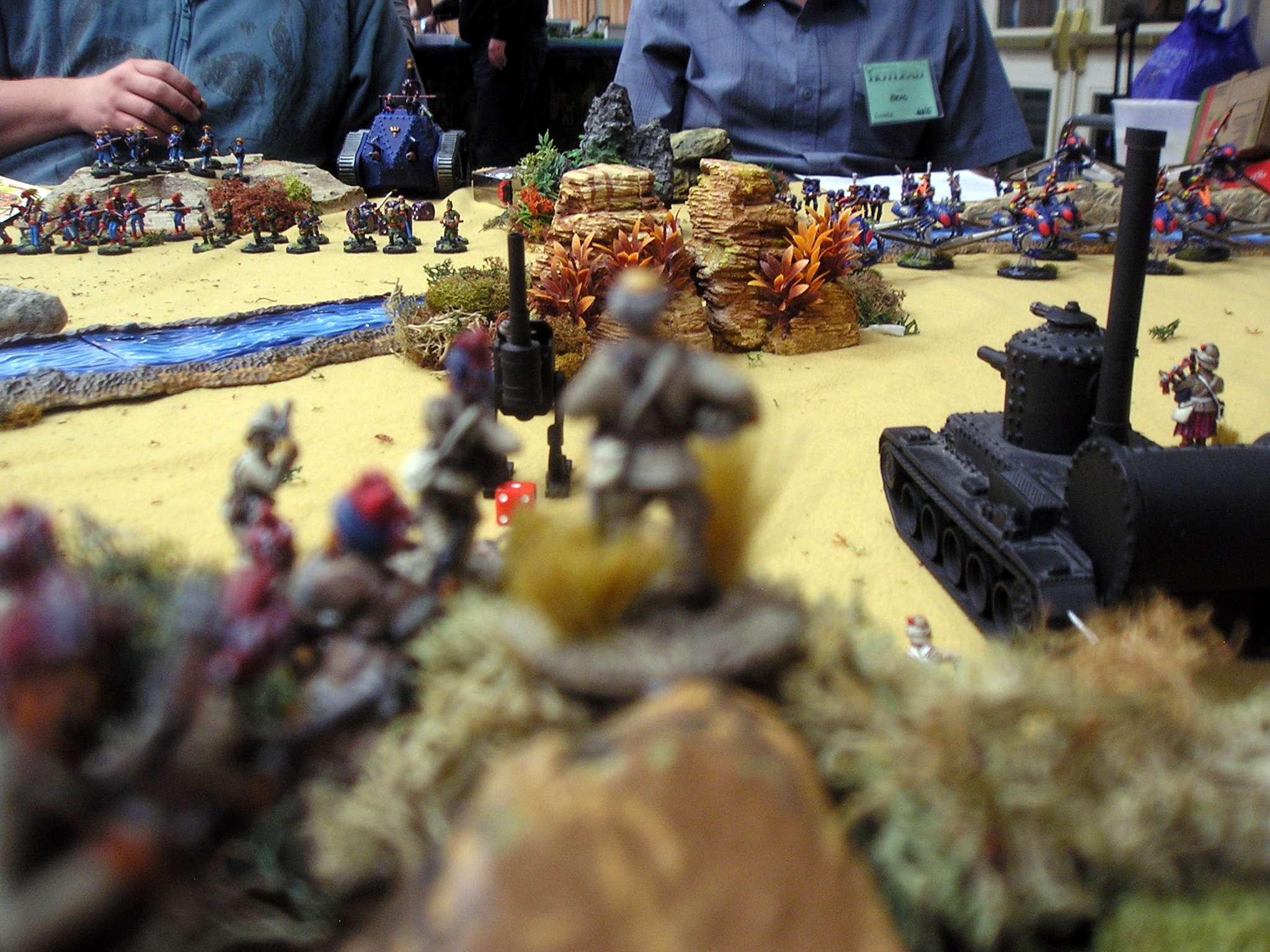 Once things got going it was quite impossible for me to observe everything else that happened on the far end of the table. There were a lot of Arab types among our opponents, and a vast horde of them tangled with the aliens, damaging a tripod, killing some dismounts, and generating vast numbers of martyrs from the alien heat rays.

Here some more Arabs charge the US contingent: 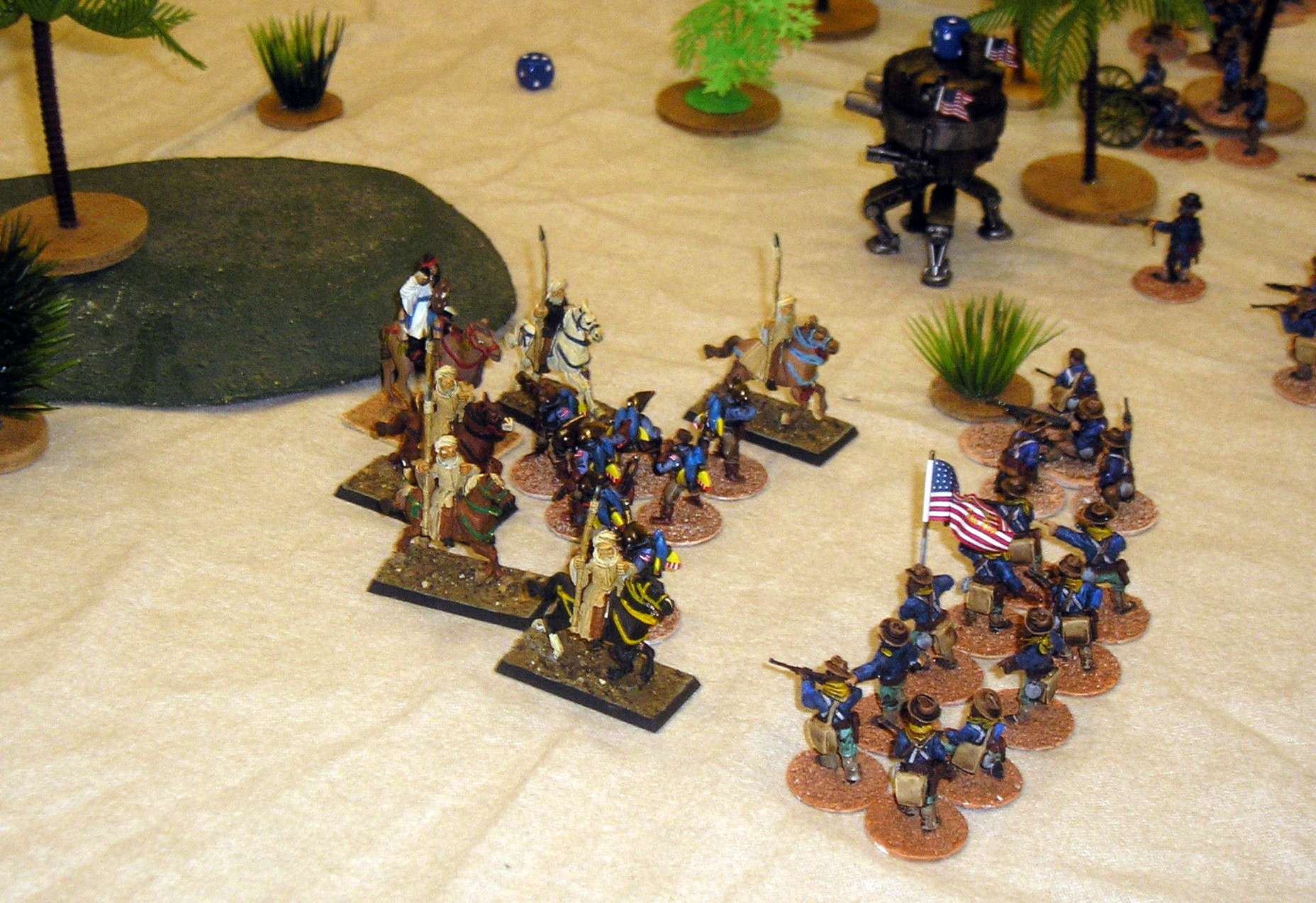 Japanese infantry, US allies in this battle, advance, while an airship thingie (Japanese as well, I think) covers them from above: 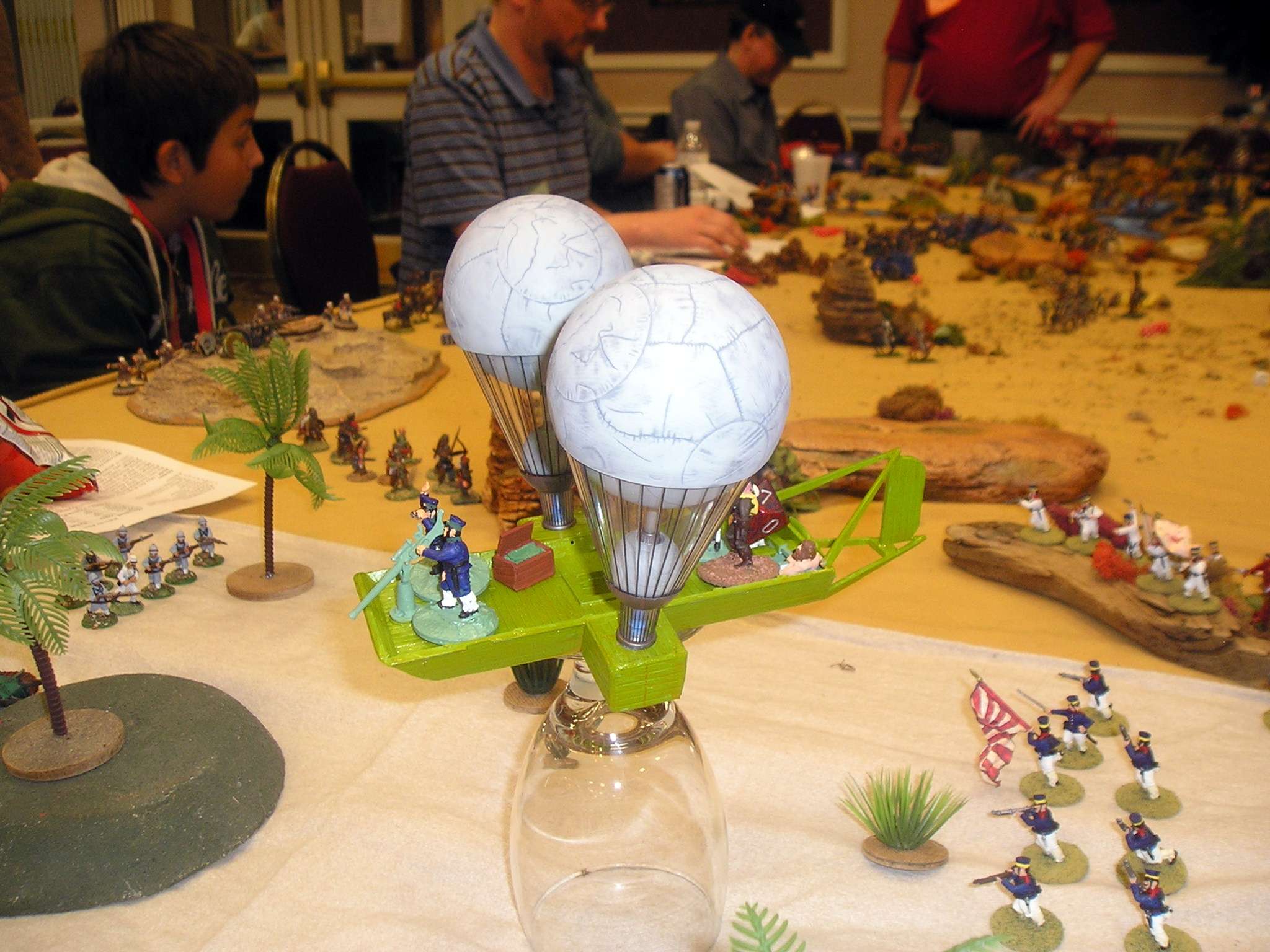 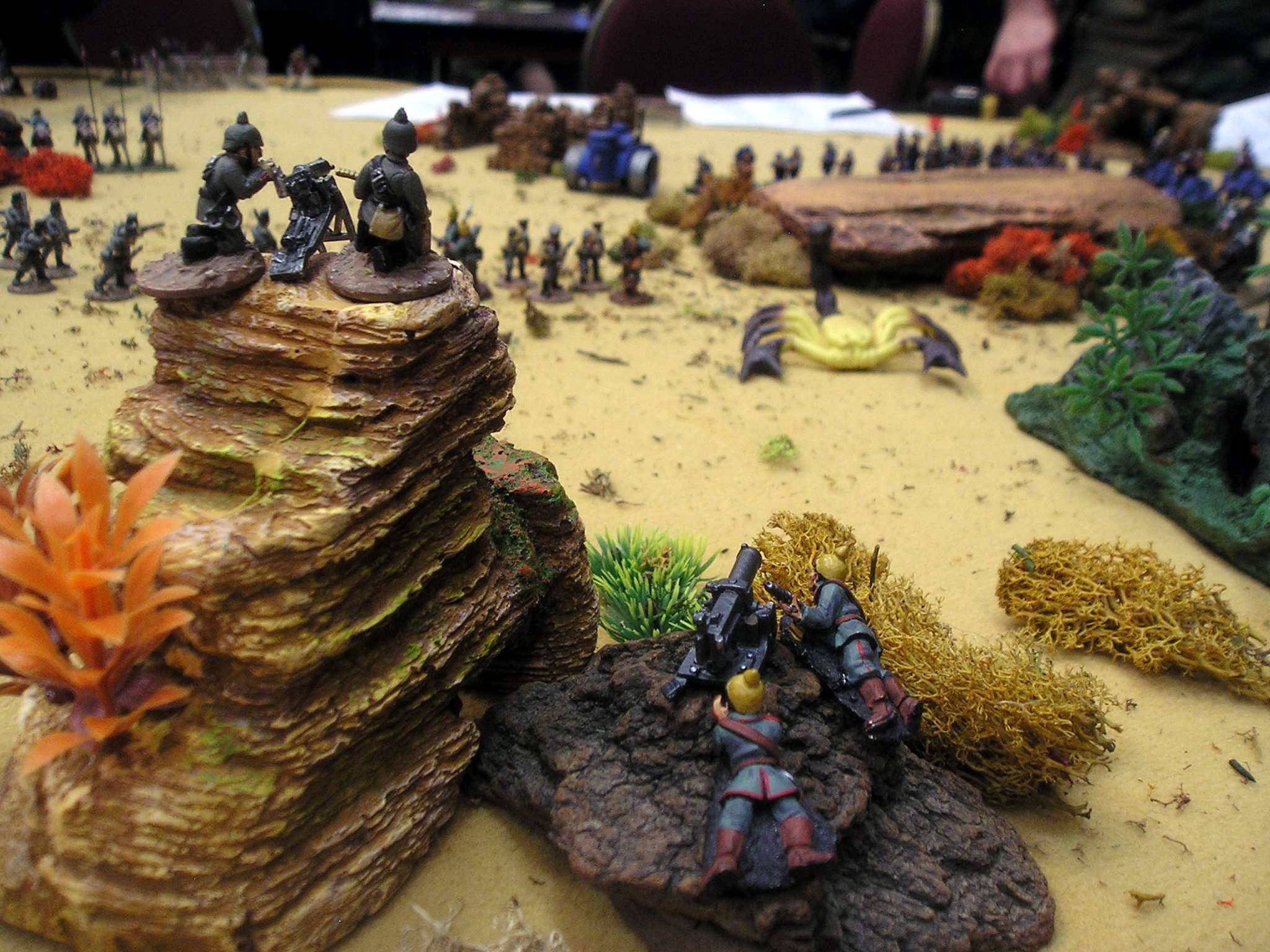 While their infantry colleagues are ambushed and a few eaten by raptor-like creatures looking suspiciously Holstein in colouration:

On my front, I unlimbered my artillery and halted by steam tank to shoot up the mechanical dragon fly rider guys as they came at me. I got a few, and the survivors closed in on HMS Billious in an attempt to bring her down: 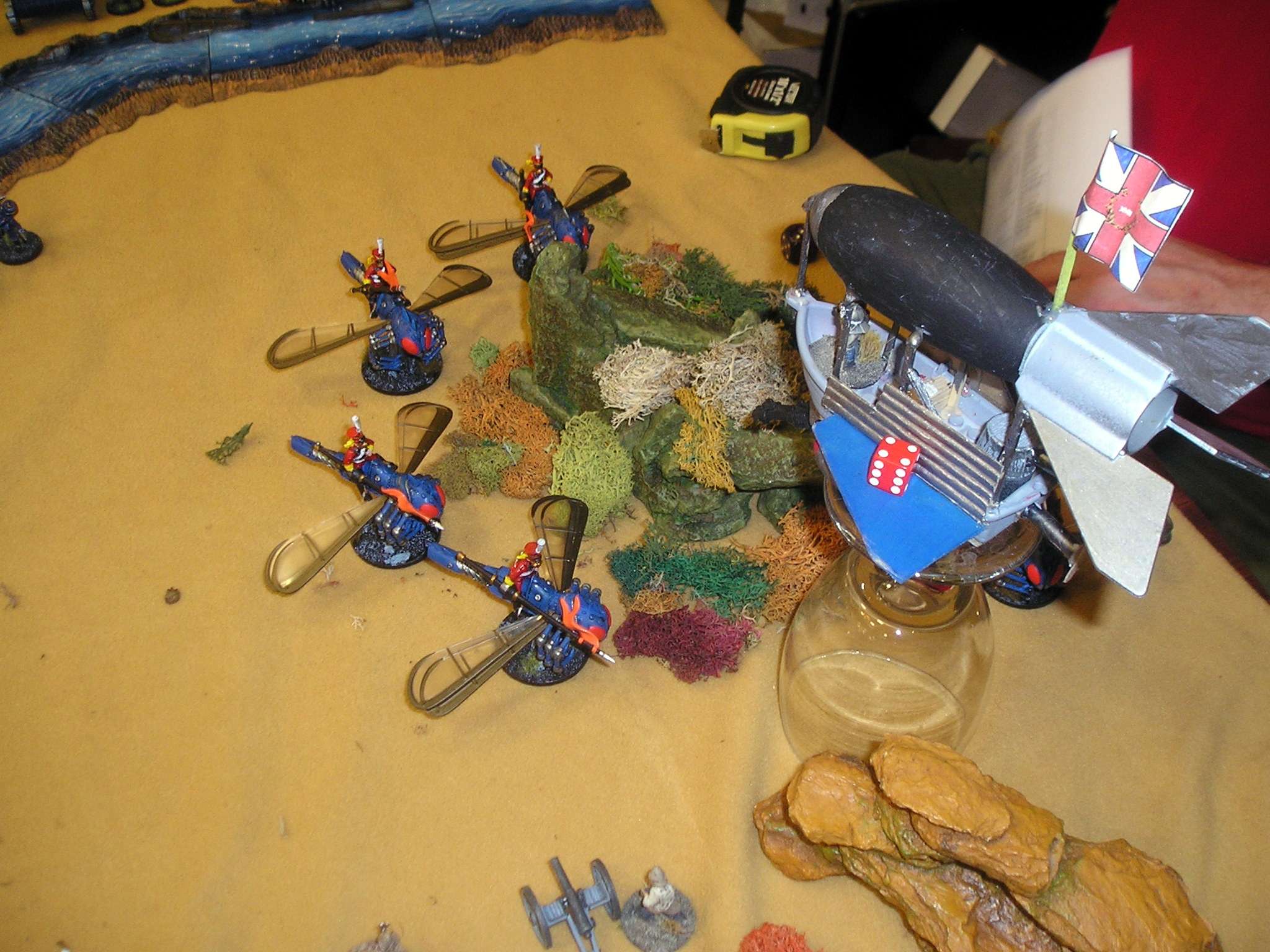 Lt. Archibald Smedley climbs out on the wing of the Billious, armed with his trusty Webley service pistol, and fights off the flying Dutchmen. He would be awarded the Distinguished Service Order for this feat, thanks in small part to his engagement to Miss. Fiona Crumblethwaite-Brookhamster, niece of Lady Smythe-Dishrag. The flying Dutchmen were destroyed in this fight, while Billious survived and continued the fight. 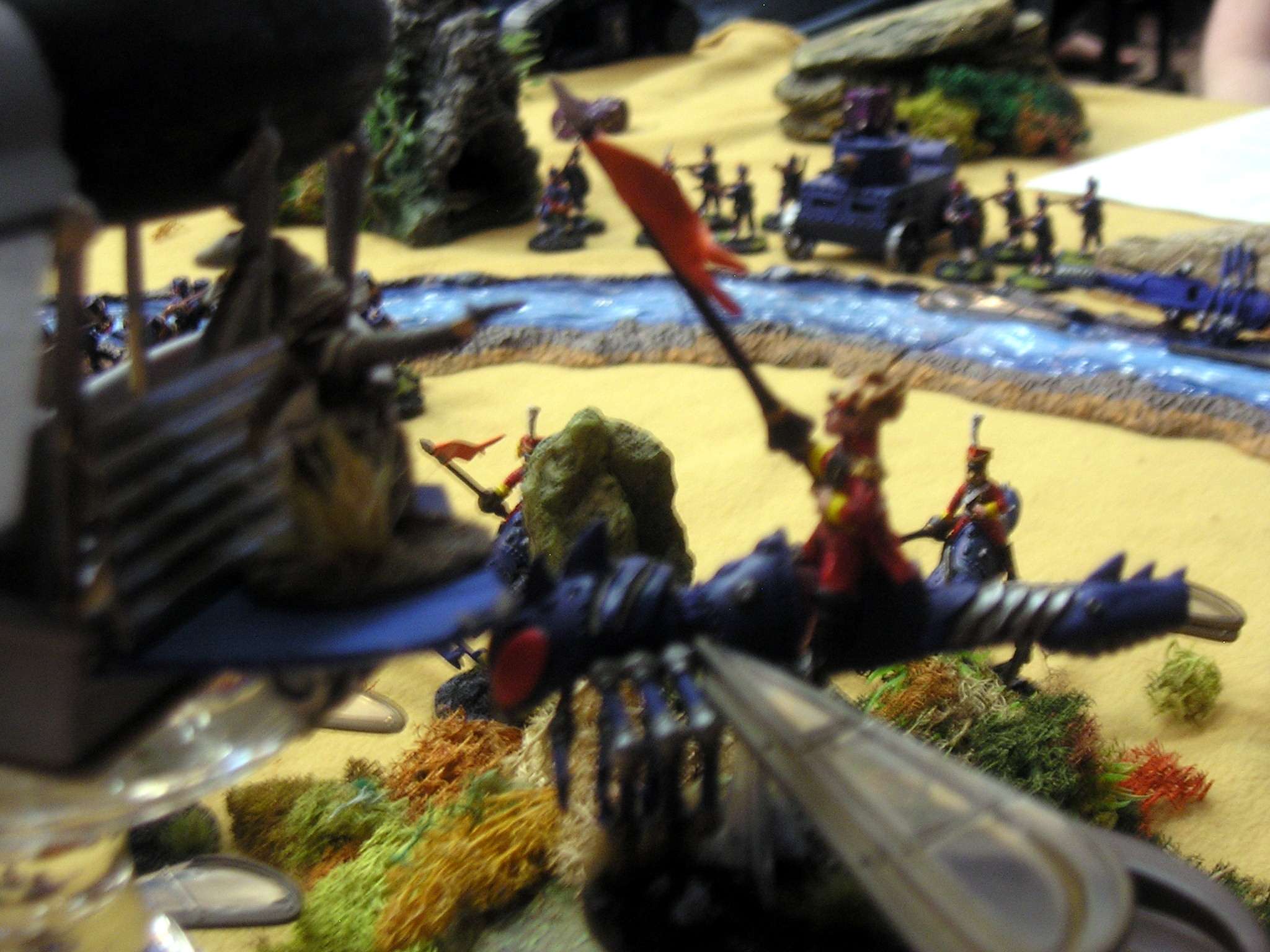 Meanwhile, on my left, young Will sent Her Majesty's aircar Chitty Chitty BoomBoom in to bomb and strafe the Dutch Saurian Mounted Dudes, checking their advance but nearly being shot down in the process: 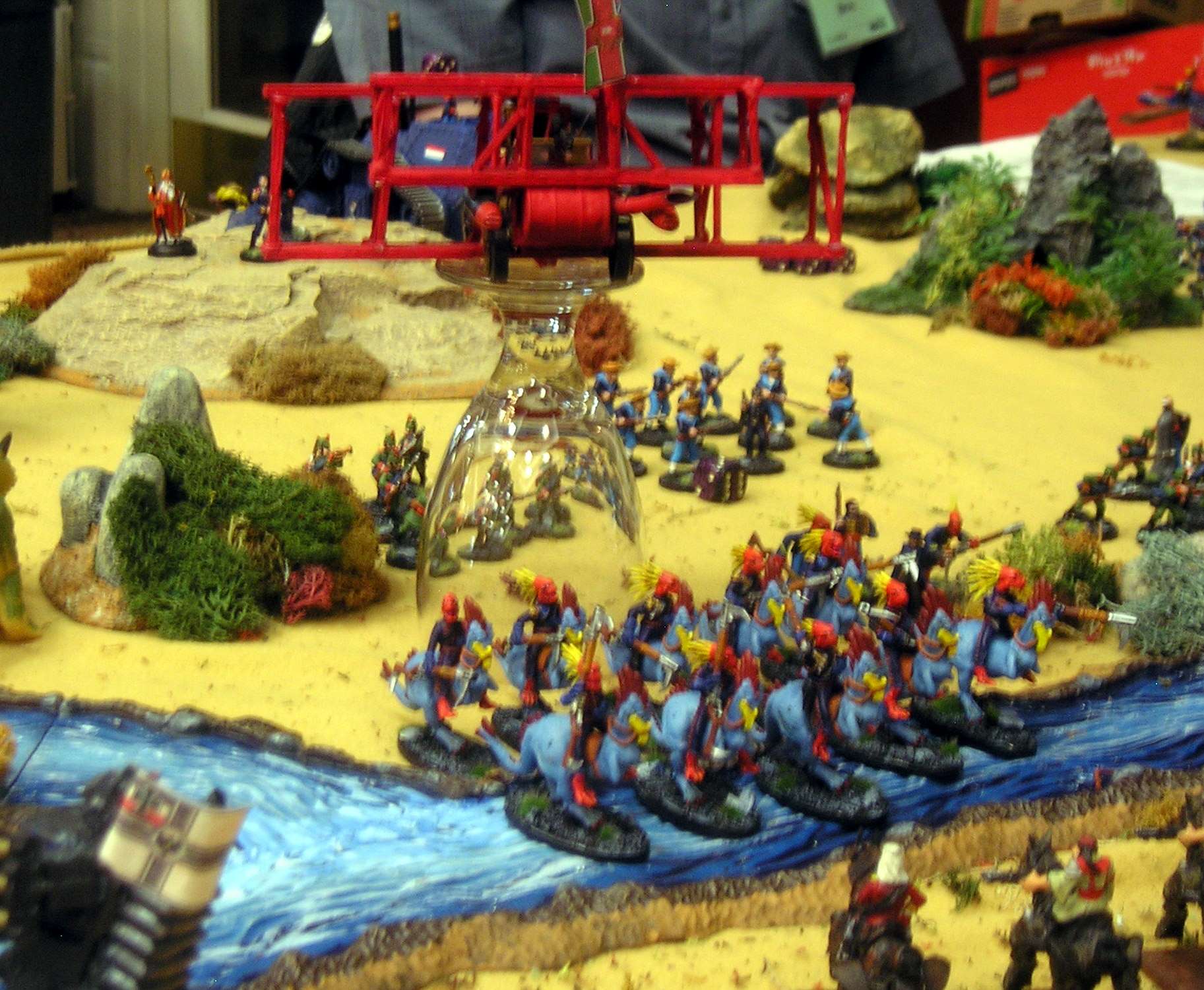 For my part, while my Highlanders suffered grievously at the river when ambushed by the Dutch rocket troops, who cam over a small hill, rocket packs and guns blazing, the Dutch were in their turn wiped out in a charge of my 21st Lancers, sadly not pictured here, winning their commander a Mention in Dispatches. After four hours of play, when we finally came to a halt, it was agreed that the Dutch Alliance had lost its grip on Venus, and that Perfidious Albion would be dominant, especially as its allies, the US and Japan, had been bled white in the battle.

Now, if only we can grow a decent strain of tea here, this could be a decent place for a plantation, what?
Posted by Mad Padre at 8:19 PM