The ambush scenario in Platoon Forward requires the side being ambushed to traverse a table from one edge to another. Accordingly, I set up this Normandyish scene with a main road and some side roads. The blinds on the board indicate possible German ambush sites, which are rolled for randomly as per PF's mecnahism for determining the type and number of OPFOR. As per the ambush rules, the ambushing side has six turns to wreak havoc before relieving forces come to the rescue, at which point the game either ends or is continued with the ambushing side taking on the relievers. The ambushers are outnumbered by a factor of 1-3 or thereabouts.

As with other Denis Audet games, I am playing them solitaire, using Too Fat Lardies' Troops, Weapons and Tactics rules. Normally I would use 20mm or 1\72nd scale rules for these games, but given the number of vehicles needed for the convoy I am using my 15mm kit. All the infantry shown below are manufactured by Battlefront, as are the carriers. The trucks are from Old Glory. The buildings are from Paper Terrain by Scitt Washburn, which I highly recommend for affordable buildings. 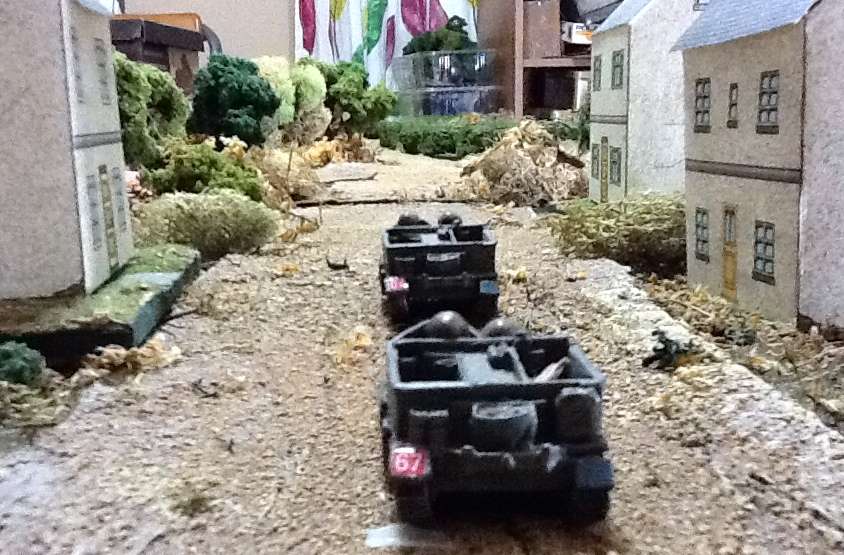 Cpl Legros leads the way with three section as the convoy sets off.

"Is he going to be decorated?" Audet asked Dr. Armand as their carrier clattered along a narrow dirt road.

"He should be." The RMO was referring to Pte Roy*, from the regiment's antitank platoon. He had been found dead beside his 6 pdr gun, and everyone was saying that his actions were deserving of the Victoria Cross. "If it hadn't been for Roy and his gun, the Jerries would have overrun A Company. Hell of a way to spend our first night in France."

"A decoration would be good for us, for the Regiment" said Audet. He allowed himself a brief vision of being at Buckingham Palace and having the English king pin a medal on his dress uniform, maybe an MC. That would be good.

The Canadian convoy enters further on the board. The first blind in the village is a dummy blind. Phew! But wait a moment ... the second blind is the real deal, Gefreiter Letkeman and his panzer grenadiers.

In the back of the carrier, the Chaud's chaplain, Padre Huard,** was dozing, his head pillowed against a canvas satchel stuffed with medical equipment. He and the RMO were good friends, and often entertained their fellow officers with debates about science and religion. Audet, not much of a churchgoer, felt uncomfortable around the padre, but he acknowledged the good he did to the men. Huard's simple burial service for Cpl Yergeau two days ago had meant a lot to the men of 18 Platoon.

Looking ahead, from his place in the middle of the column, Audet saw Sgt. Beaulieu in the carrier ahead of him, along with the three man Bren gun team of Cpl. Matthieu's Three Section. Ahead of them was one of the three lumbering trucks they were escorting, and ahead of it was Matthieu with his rifle team. Leading the convoy was Legros with 1 section, in the lead two carriers, with the lead truck between him and Matthieu. Looking back, Audet saw the rear most truck, and behind that, he knew, Cpl Cote and two section brought up the rear. From what he could see of him, his men were enjoying the novelty of riding instead of marching, and the gradual cooling of the oncoming evening was pleasant.

Letkeman signalled his men to prepare to fire. He wished he had some panzerfausts to see off the little tracked carriers, but Leutnant Krauss had said they were reserved for the frontline boys and couldn't be wasted on raiders. At least he had four Spandaus to put to good use. Just a moment more, let the two lead carriers pass, then the first truck, let that get into his other LMGs' field of fire, now a second truck ... "FIRE!" 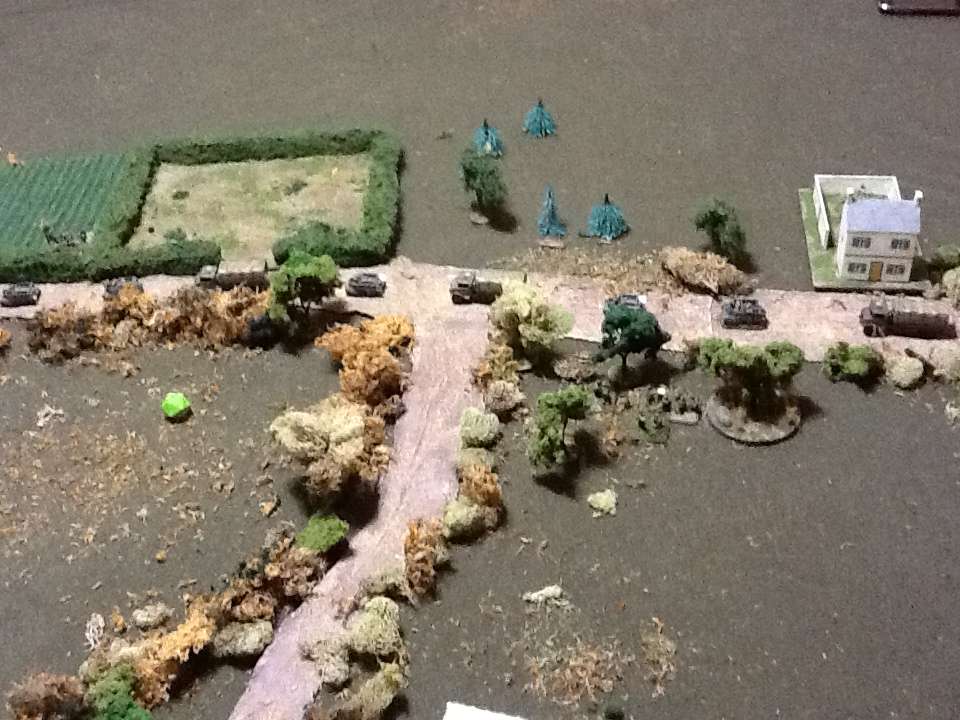 The situation at the moment the ambush is sprung. The middle truck and Beaulieu's carrier are right in front of Letkeman. The two lead carriers with Legros' section are passing one of Letkeman's two LMG teams. 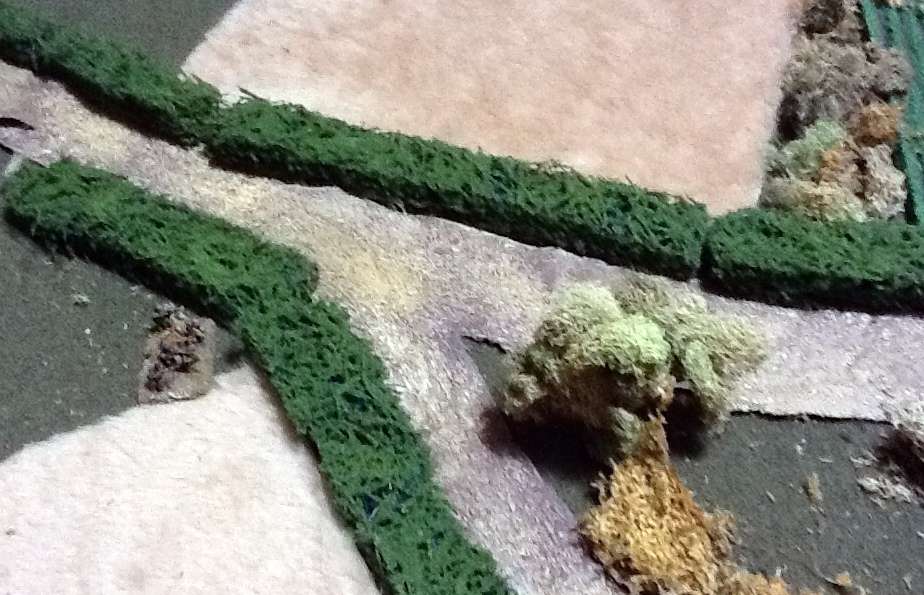 The third LMG team is sited with a clear line of sight down the road, able to engage the head of the column. It opens fire head on at the two carriers with Legros' section on board.

***
Sgt Beaulieu was telling the boys how they were spoiled having these little carriers, and how in the Great War he had been lucky for a ride in a stinking boxcar on the occasional train. "Marched our feet to nubs, we did."

Private Cournoyer, the No 2 on the Bren, laughed obligingly, just as all hell broke loose. He pitched forward, and Beaulieu felt something hot splash across his face. Old instinct kicked in, and he threw himself down in the back of the carrier, then felt a heavy weight as someone fell on top of him.

Behind him, Audet's eyes widened as he saw two men in the carrier ahead of him topple over, then was thrown off balance as his own carrier braked hard. He could hear at least two MGs, the distinctive Jerry sound, like canvas being ripped hard, sending a chill down his spine. The fire all seemed directed forward of him, and he could see muzzle flashes from the hedge about twenty five metres ahead and to his left. Now he could see two men leaping from the back of the carrier ahead, Beaulieu and another soldier with a Bren gun, and crouch behind their vehicle. Ahead of them was a loud WHOOOMP as the middle truck exploded into a fireball. He didn't see anyone get out.

Doc Armand and the Padre looked around them, their faces alarmed. "Stay down!" Audet told them, his mind racing.

The first two turns don't go well for the Canadians. The MG fire from Letkeman and one of his half sections causes two casualties on the passengers in Beaulieu's carrier, both from Matthieu's Bren team. The carrier crew must take a morale check and fail resulting in the passengers bailing out and the carrier retreating. Beaulieu and the surviving Bren gunner bail out. They get a few ineffectual shots off before taking covef under a hail if German kead. Letkeman's other section opens up on the truck, causing many hits, killing the crew and destroying the vehicle. It explodes. At the head of the column, both carriers transporting Legros' section fail their morale checks. The one carrying Legros and his rifle team turns to flee, while the second, carrying his Bren team, gets a result of passengers dismount.

A truck burns while Beaulieu and another soldier have scrambled out of their carrier and try to take shelter.


Turn 3 and the Canadians start reacting. The lead truck halts, its crew scrambling for the ditches. The rearmost truck's driver panics, and tries to reverse on the narrow road. Unfortunately, he does this as Cote tries to push forward. One of his carriers rolls badly and collides with the reversing truck, jamming both vehicles and blocking most of the road. 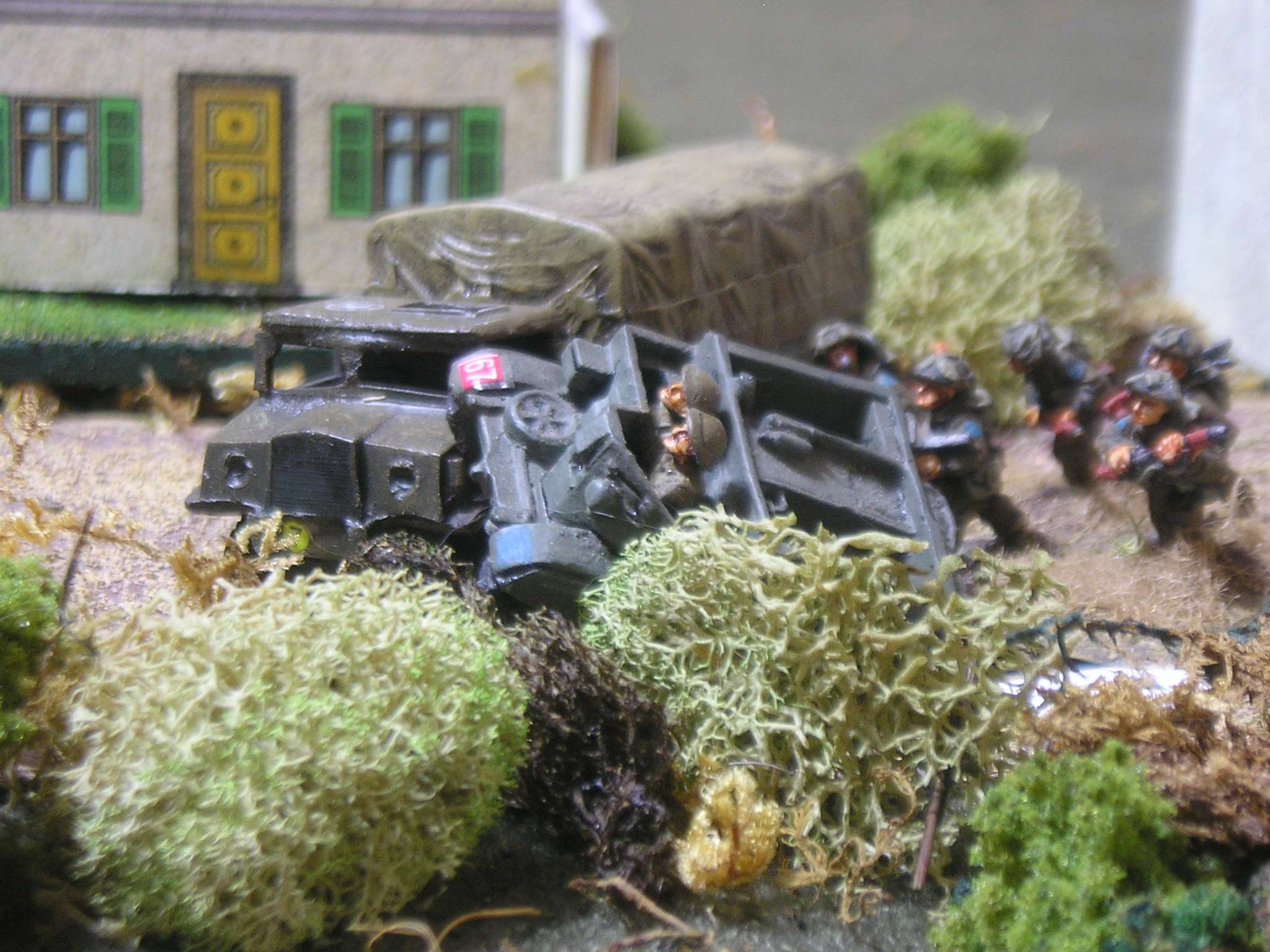 The two lead carriers retreat towards the centre of the column, leaving Legros' hapless Bren gun team cowering on the road, where they are all shot down. When Legros' car finally comes up, he is able to dismount, and directs his rifle section at one of Letkeman's two half sections. 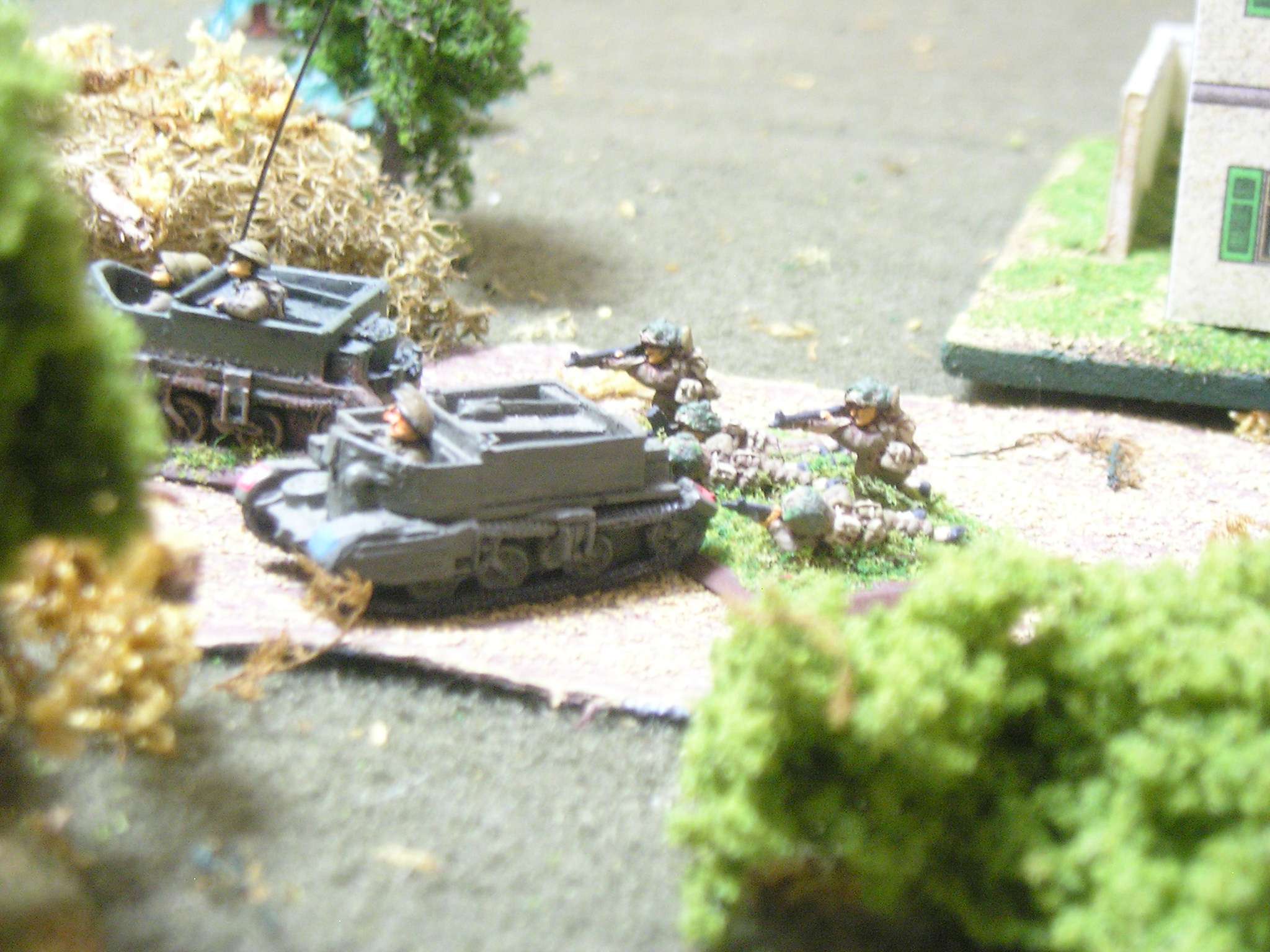 Legros in action. Canadians begin to fight back.

Cpl. Cote is activated, and while his Bren team scrambles dazed from the wreck of their carrier, Cote leads his rifle team through the hedge and begins to try and outflank Letkeman. They get a few shots off and the shock begins to mount on the Germans. 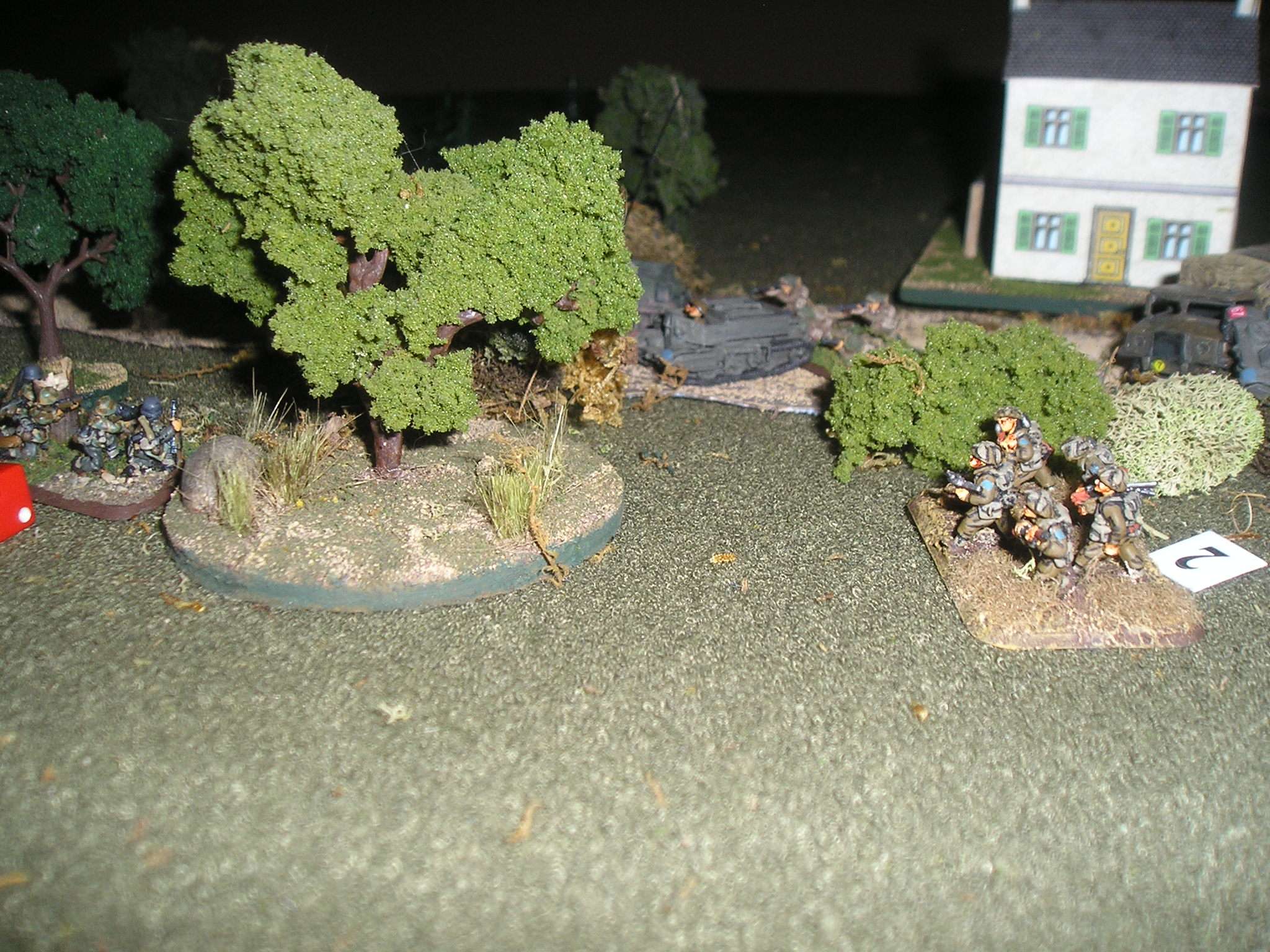 Cote begins to stalk Letkeman, who is feeling less than comfortable now. 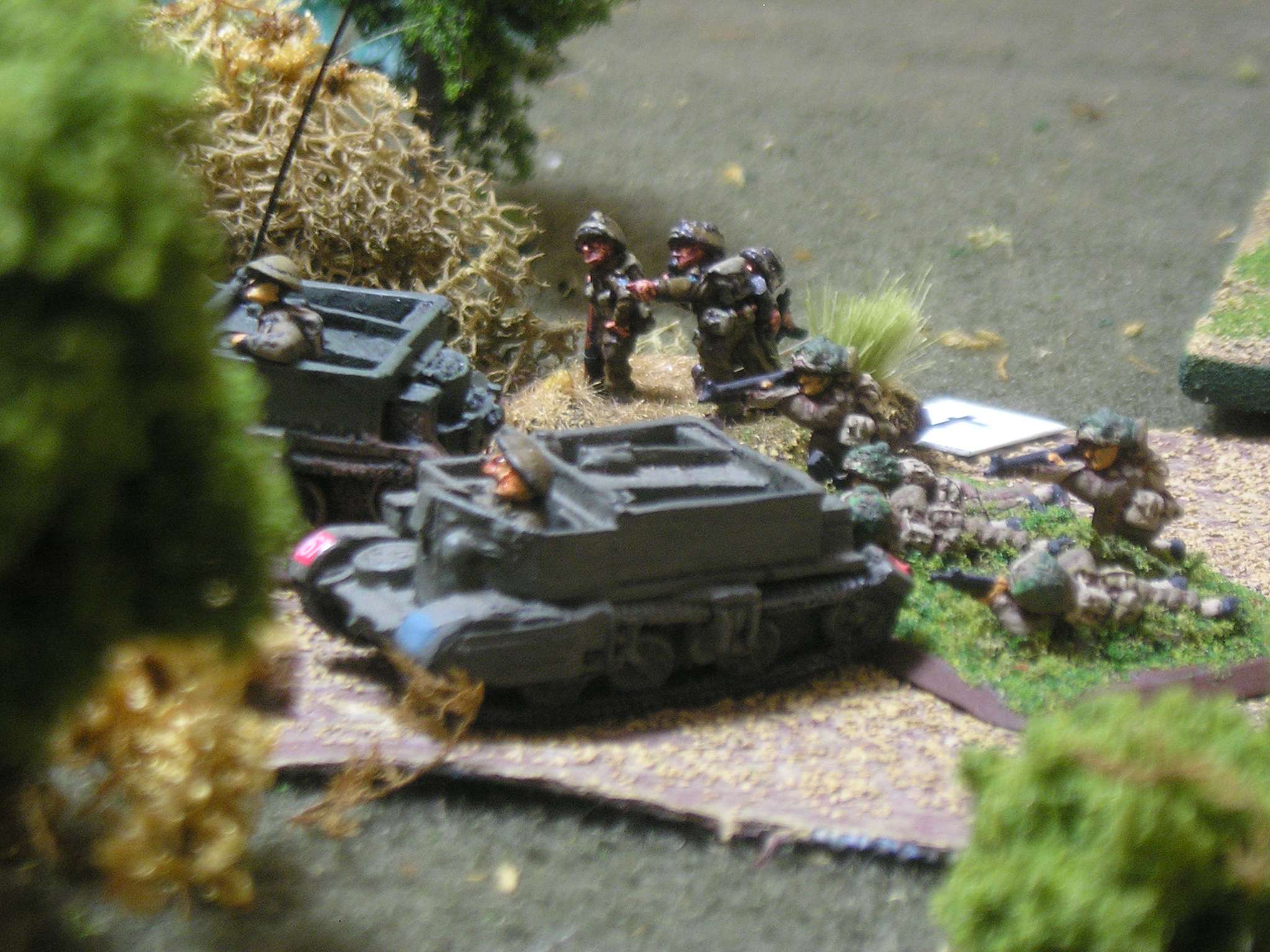 Audet is now activated. Leaving the Padre and the Doc in the relative shelter of the carrier, he goes to join himself to Legros' rifle section. That's Audet on the left, pointing decisively. 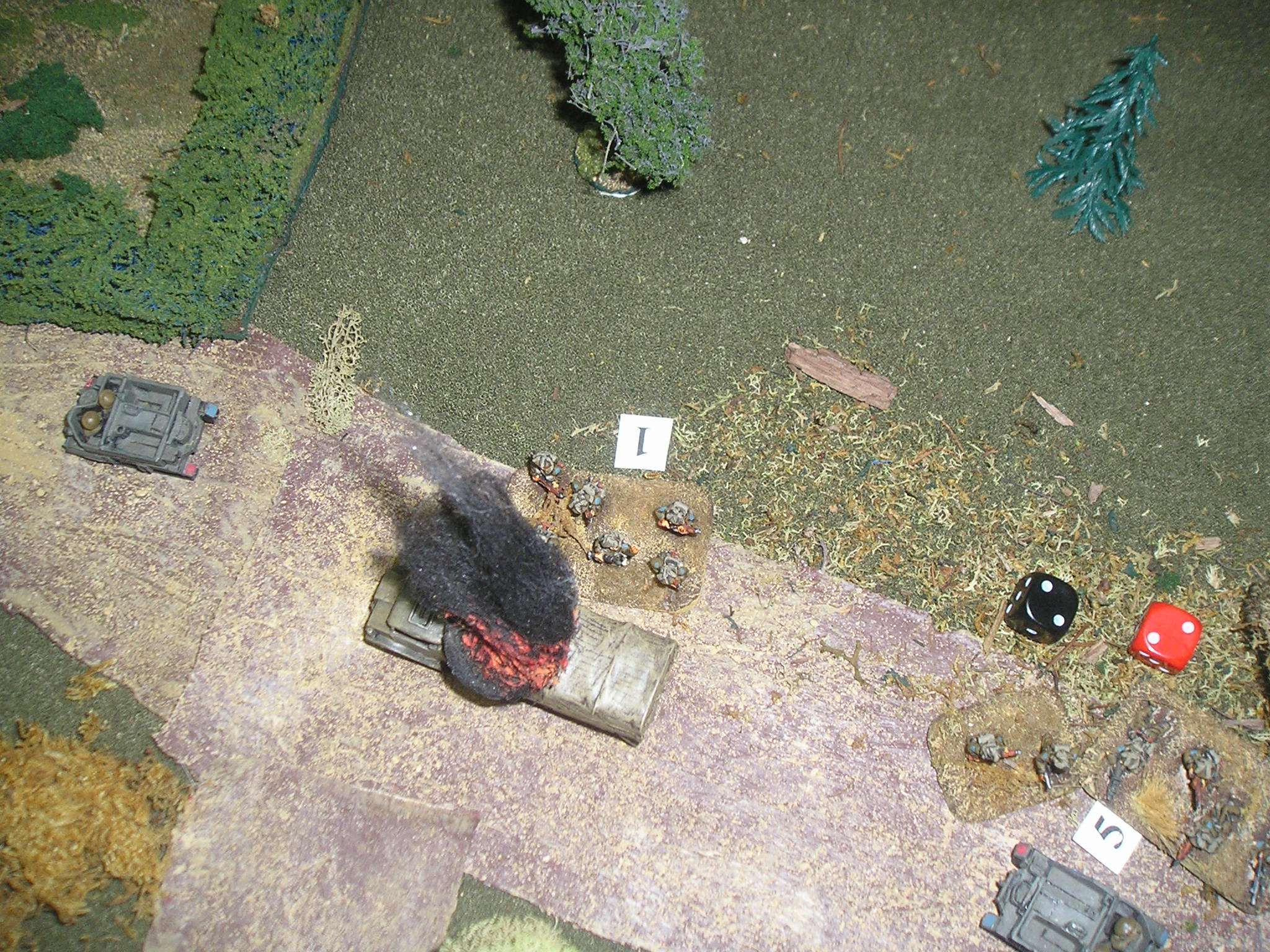 More Canadian reactions. Cpl Matthieu leads his rifle section to shelter behind the burning truck, and opens fire on Letkeman, who is now taking fire from three sides. 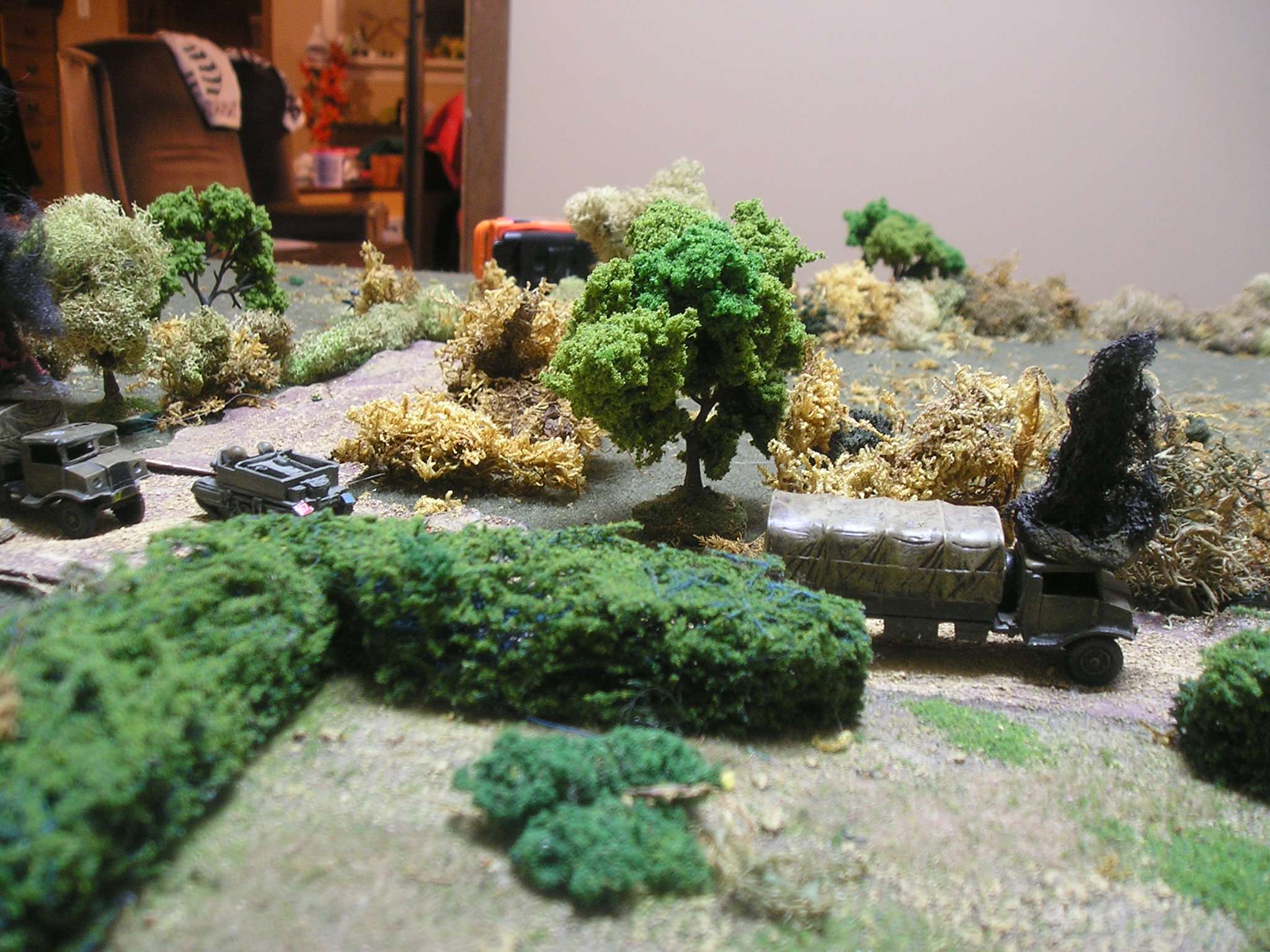 The German LMG team posted at the far left has a clear shot down the road and takes out the lead Canadian truck. All three trucks are now immobilized or burning. 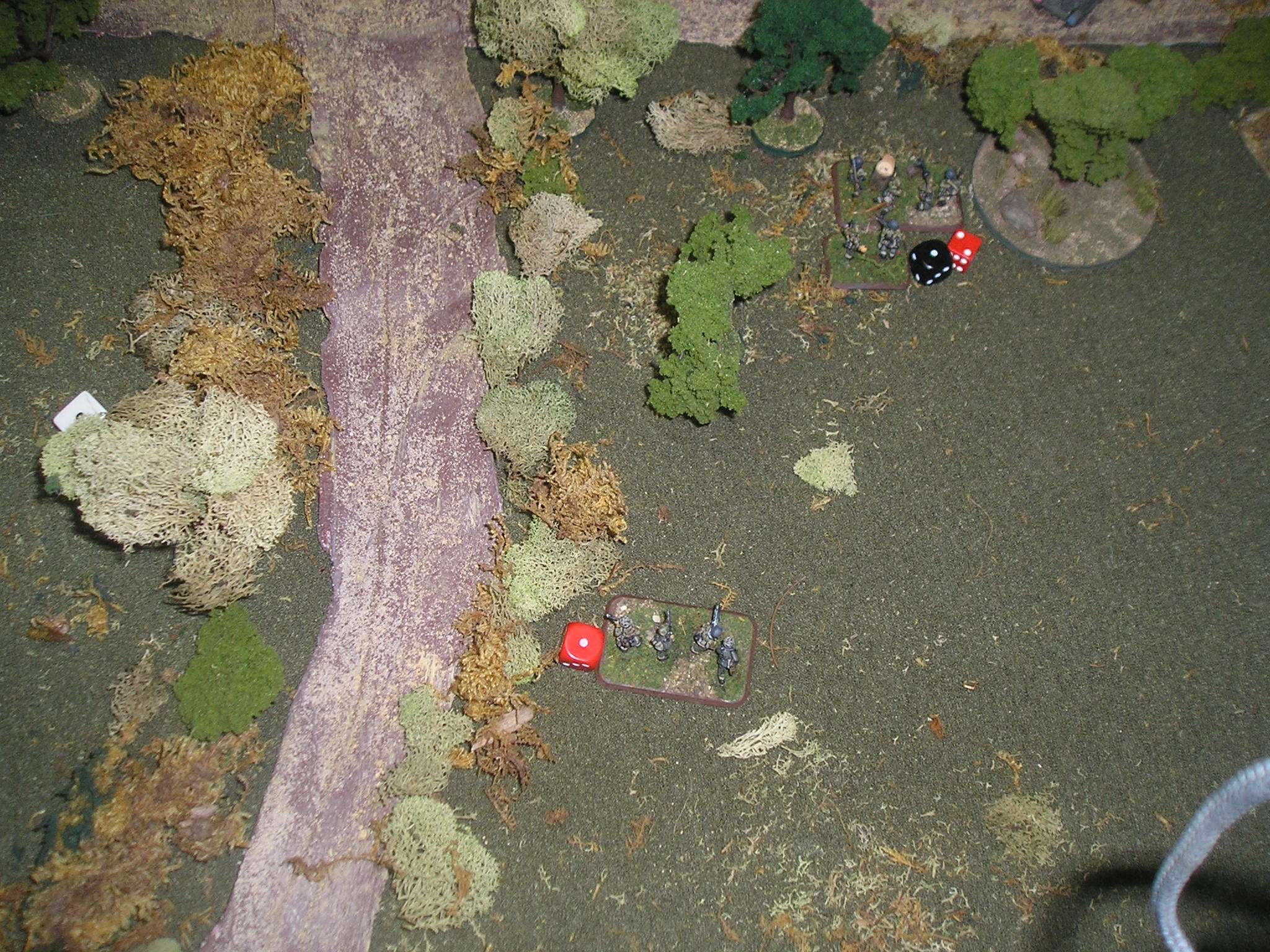 Gefreiter Letkeman, a veteran, knows that the Tommies are over their shock and outnumber him. One of his half sections has taken a casualty. Time they were going. Joining one half section, he directs the other to withdraw a bound, set up their LMG, and cover his withdrawal. That way they will leapfrog back and break contact, trusting his other LMG teams will do the same. 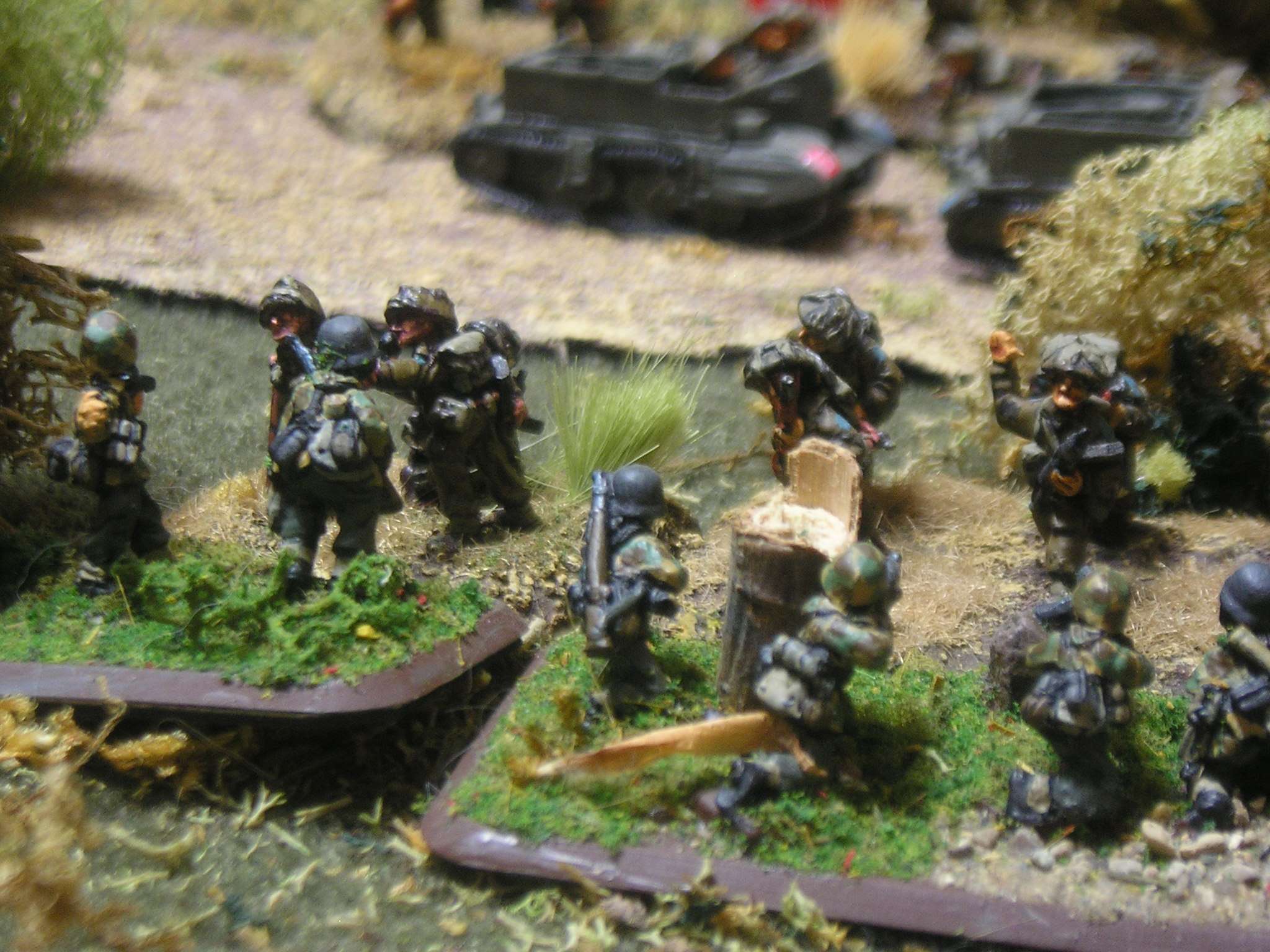 Every game with Audet includes one use per game of the Heroic Commander card. Audet is a jerk, but he's a brave glory hound and the Heroic Commander card allows him to do something incredibly brave and rash. The HC card comes up now, just after Letkeman begins to pull back. Sensing that the German fire is slackening, Audet grabs Legros' arm, and waves his Sten at the hedge with his other hand. "A l'assaut les boys!" The Canadians charge forward, and roll enough movement dice to push through the hedge and into Letkeman and his half section. The ensuring Close Combat is a near thing, but the result is that the Germans lose two men and take some shock. They lose the melee and fall back 12 inches. Letkeman survives and his men fade away into the Norman countryside.
The ambush is over.

That charge concluded the fighting. The two German LMG teams break contact. The Germans lost three men. The Canadians had suffered five casualties, and the severity of these casualties will be checked in the next installment. Audet's mission had failed. The convoy would not get through. Two trucks were destroyed, with two crew killed. A third was damaged, along with a carrier. Not the outcome Audet had hoped for, but at least he has survived and has a sharp little fight in the hedgerows to point to, witnessed by the RMO and Padre from the carrier.

In our next installment, perhaps tomorrow night, we'll see what the result is for Audet.


*Pte L.V. Roy did exist. He and his 6 pdr played a vital role in protecting the Chaudiere's A Coy on the night of June 6-7. when they were nearly overrun by halftracks and troops from 21st Panzer Division. Roy never received a posthumous decoration but is still remembered in the Regiment today.
**Padre Huard also existed. He was a Roman Catholic priest serving as the regiment's chaplain in Normandy, and by this account, he was a good one.
Posted by Mad Padre at 8:58 PM