On Day 2 of the campaign, Marshall Kurvi-Tasch, the Austrian CinC, had identified, with a high degree of probability, the presence of Napoleon and his Guard in the town of Karlseck.  With Groll’s report of a French corps some distance to the West, the Marshall felt that he could concentrate his forces and crush Napoleon, outfoxing the fox at his own game.

To that end, he gave orders that the light infantry division detached from his own force and shown below as Col 5, would remain in front of Karsleck while he shifted his own Corps (1 infantry and 1 cavalry division) W following the road to B5 and then south to C5, to allow Groll (Col 2) to link up with him.   The Austrians won the initiative on Day 3 and Col 1 executed these orders.  It discovered Col C (Napoleon with the Guard and a cav division) at D5 while the Grenzers of Col 5 reported that another French Corps was moving into Karseck.   That was all the information K-T needed.  Stroking his luxuriant whiskers with satisfaction, the Marshall declared a Battle, since he occupied the centre position at C5.  The squares for the battle, meaning the landscape of the tabletop, would be C4-6 and D4-6. Austrian Cols 1,5 and French Cols C,D will be frozen if Napoleon accepts the battle (he has one chance during the 5 days of Scharnhorst to refuse a battle, at a cost of Victory Points).  The Emperor accepts the battle.

All Columns not frozen now have a chance to reach the battle.   The French turn is next, and Col A (Moisan’s Corps, an infantry division) marches E from D3 to D4.  It has to pay one if its 6 movement points to disengage from the Zone of Control of Col 2, but that leaves it more than enough MPs to arrive on the battlefield and take up position on Napoleon’s left wing. 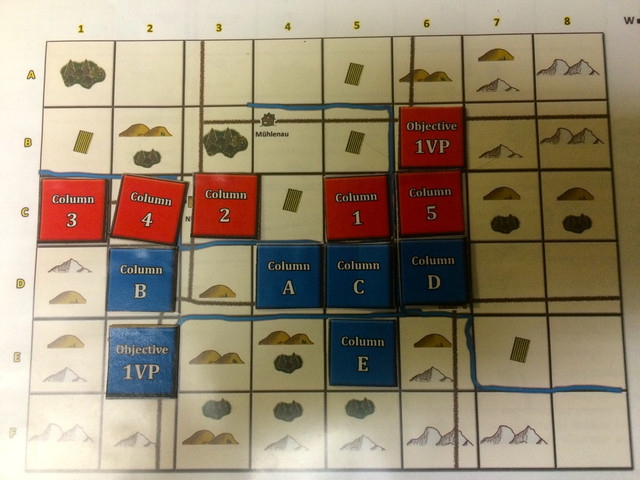 Now it’s the Austrian’s turn to move unfrozen columns.  Groll (Col 2) and his substantial Corps (2 infantry and 1 cavalry division) know that there is French cavalry (Col B) in D2.  He then orders his Corps to move one square south to D2.  This has two results.  First, Groll will be able to arrive, at some point, on the battlefield as a reinforcement.  However, it poses a problem for Col B.  In Scharnhorst, Columns may not move diagonally.  Col B, which is the best of the French cavalry units, four brigades of heavy cavalry under Marshall Noel, is now cut off from the battlefield.  It doesn’t have the MPs to disengage from the ZOCs of Cols 4 and 2 and reach square E4 to arrive as a reinforcement.  It is out of the battle.

The best French move now is to leave ColB in place.  Col 4, the light cavalry division under Sachsen, does have the MPs to disengage from Col B’s ZOC and march C3 C4 to reach the battlefield, across from Moisan (Col A).  However, the Austrian Col 3 (an infantry division of 4 brigades under Von Lunenburg) will also miss the battle because it doesn’t have the MPs to reach C3 as a possible reinforcement.  Being south of the minor river at C1 really hurts C3.

Here is one satisfying aspect of the Scharnhorst system, in that one can draw up two armies using a points system and, if the points are equal, one can expect an equal contest,  However, with this battle, of the 400 points allotted to both sides, not all of those troops are guaranteed to make it on to the table, so one has a good chance of an asymmetrical result, if one likes that sort of thing. 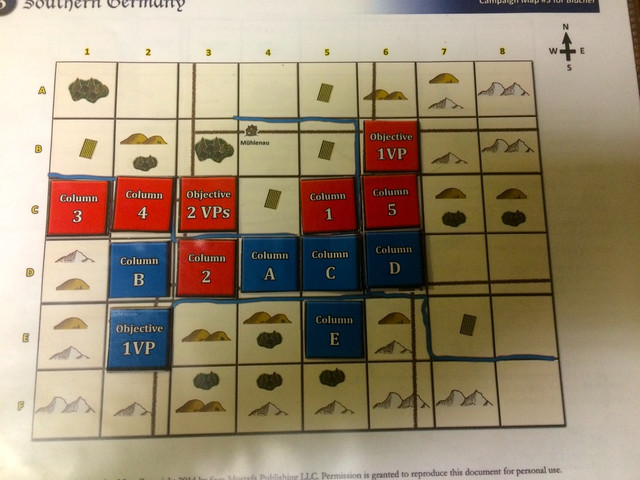 The battle commences on the dawn of day 4.  Here is the deadly field of Karlseck-Kaltenbach.  This battle marks the first official use of my groundsheet, a mix of acrylic craft store paint and artist’s pastel crayons, treated afterwards with artist’s fixative.  The roads are all handmade, using balsa or cardboard coloured with pastels.   At the bottom left is Karsleck, and the village of Kaltenbach is in the centre.   This battlefield corresponds to the six squares of the Scharnhorst map of S Germany mentioned above, with some randomized hills thrown in.

I need more trees.  As you can see, I had to quickly make some river sections (more cardboard coloured by pastel) to provide the rivers required by the Scharnhorst map.    The hedge sections are resin, from Timecast. 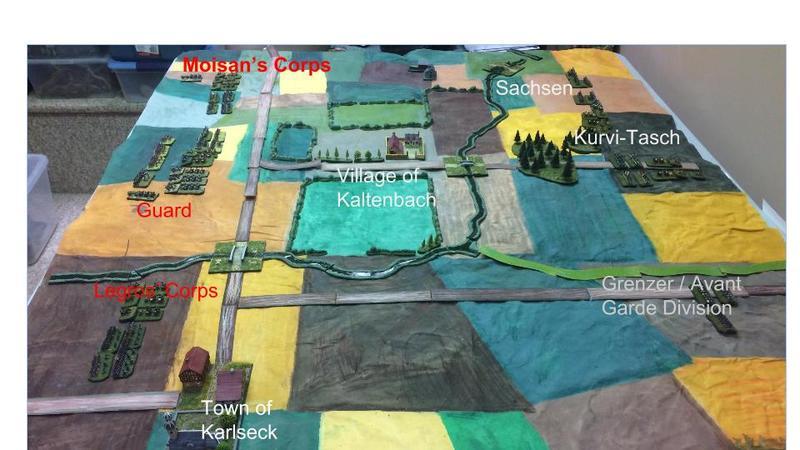 A view of the French side.  Players of Blucher will notice that I am using my batteries to form units, despite the advice of some wise readers, such as Kaptain Kobolod, to fold them into individual brigades.  However, if I did that, I wouldn’t really be able to use my artillery and limber models, would I?

I forgot to note that Kaltenbach is worth 1 VP.   It was a bit laborious labelling these photos on my Mac.  I had to use Google Slides to caption the photos, and then export them to my laptop so I could upload them to Imageshack.  I need to research better photo-editing tools for the Mac. 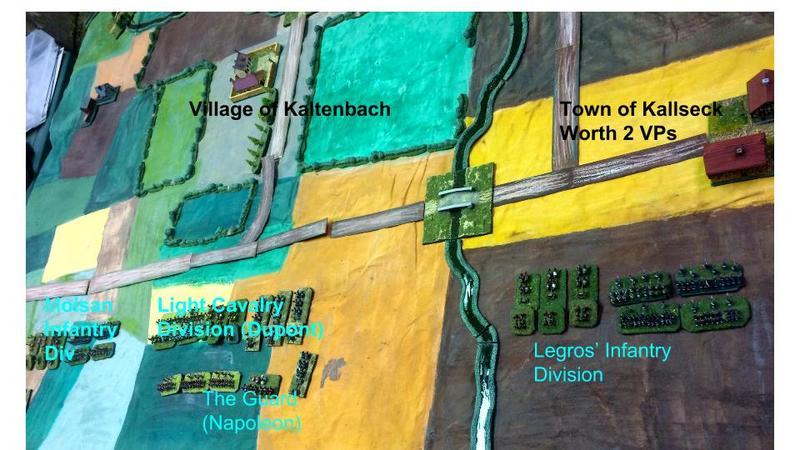 View from the Austrian side.   Kurvi-Tasch has lots of cavalry, and he has three more divisions that at some point will show up on Napoleon’s left flank, so he’s in a pretty good spot.   He doesn’t know yet what the French have in the way of reinforcements, or that Napoleon can only count on one infantry division possibly coming to his aid.  The Emperor has a very real chance of his flank being rolled up from left to right. 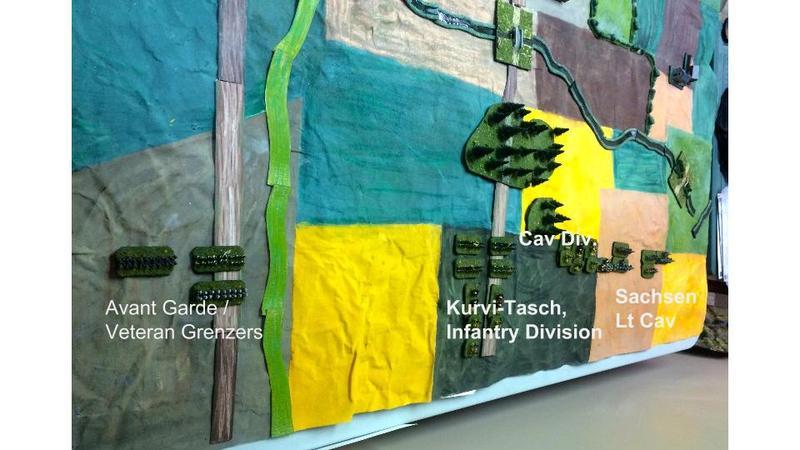 We shall see what transpires.  It may be a bad day for the French, if the Austrians get lucky and Groll’s II Corps enters the table early on. Will the Emperor try to refuse his left flank, or will he seek to savage Kurvi-Tasch’s I Korps before it can be reinforced?